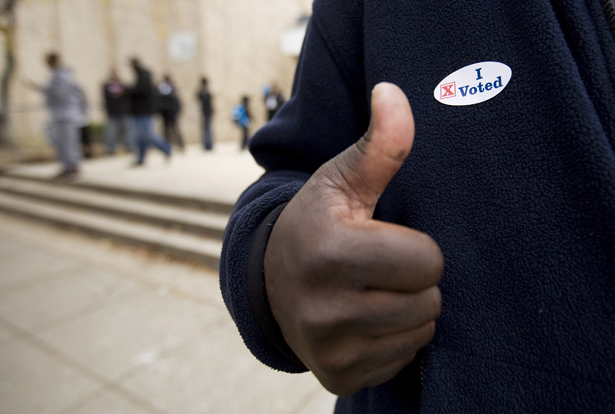 Last year, North Carolina passed the most sweeping voting restrictions since the passage of the Voting Rights Act in 1965.

Civil rights groups like the North Carolina NAACP and ACLU asked the courts for an injunction against three major parts of the law before the midterms—a reduction in early voting by a week, the elimination of same-day registration during the early voting period and a prohibition on counting ballots accidentally cast in the wrong precinct. In early August, District Court Judge Thomas Schroeder denied the injunction, saying the plaintiffs had not proven “irreparable harm.”

Two of three judges on the Fourth Circuit Court of Appeals overruled parts of Schroeder’s ruling today, reinstating same-day registration and the counting of out-of-precinct ballots for 2014.

In not-so-good news for voting rights, the appeals court also upheld: “(i) the reduction of early-voting days; (ii) the expansion of allowable voter challengers; (iii) the elimination of the discretion of county boards of elections to keep the polls open an additional hour on Election Day in ‘extraordinary circumstances’; (iv) the elimination of pre-registration of sixteen- and seventeen-year-olds who will not be eighteen years old by the next general election; and (v) the soft roll-out of voter identification requirements to go into effect in 2016.”

“With respect to these provisions, we conclude that, although Plaintiffs may ultimately succeed at trial, they have not met their burden of satisfying all elements necessary for a preliminary injunction,” wrote Judges James Wynn and Henry Floyd, two Obama appointees.

Roughly 7,500 voters also cast their ballots in the wrong precinct but right county in 2012. Judge Wynn noted during oral arguments that he lived next door to a voting precinct, but was registered to vote at one a few miles away, which was highly confusing for voters.

“Why doesn’t North Carolina want people to vote?” he asked the state.

Over 450 voters were disenfranchised by the elimination of these reforms in the May primary, including an army veteran returning from Afghanistan.

This is also an important victory for voting rights nationally after a series of bad decisions recently.

On Monday, the Supreme Court ruled against early voting in Ohio just sixteen hours before it was set to begin.

On September 13, a panel of three Republican judges on the Seventh Circuit immediately reinstated Wisconsin’s voter ID law, which had been blocked for over two years, weeks before the election, causing electoral chaos in the state.

In the North Carolina case, Judge Diana Motz dissented because she said the state was not prepared to implement any last-minute voting changes.

“The public interest is not served changing the rules to an election this close to an election,” argued Tom Farr, a lawyer for North Carolina. That’s the exact opposite of what Republican officials who supported voter ID argued in Wisconsin.

But there’s a big difference between the cases in Wisconsin and North Carolina—the appeals court in Wisconsin implemented a sweeping new election restriction weeks before the election that voters and election officials were unfamiliar with. The appeals court in North Carolina simply restored parts of the status quo that existed before the May primary, which had been the norm for voters.

“We’re asking that voters be able to vote the way they did in 2012 and 2010,” argued Penda Hair of the Advancement Project.

The victory, however, could be short-lived if North Carolina appeals to the Supreme Court. Either way, there will be a full trial on the totality of the new voting restrictions in July 2015.