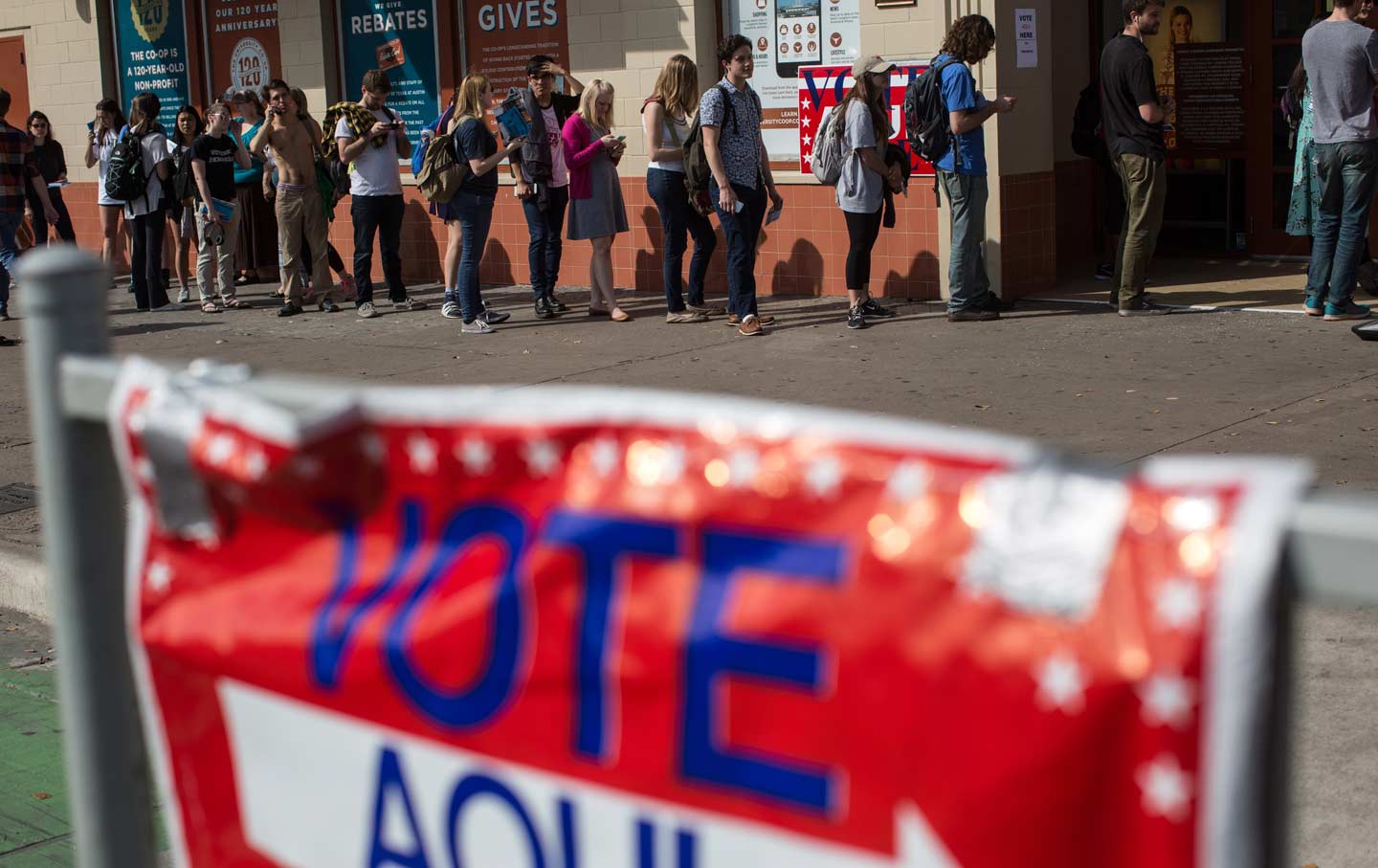 Voters waited in line to cast their Super Tuesday ballots at a polling station on the University Co-op in Austin, Texas. (AP Photo / Tamir Kalifa)

On Super Tuesday, voters went to the polls in Waller County, Texas, where 28-year-old Sandra Bland controversially died in police custody last year. It has been described as “the most racist county in the state of Texas,” with the highest number of lynchings between 1877 and 1950. In 2004, the district attorney tried to prevent college students at the historically black Prairie View A&M University from voting where they attended school.

Waller County resident Imani Clark, a student at Prairie View A&M, was blocked from casting a ballot by Texas’ strict voter ID law. She does not have a driver’s license or own a car and does not possess one of the seven forms of government-issued identification required to vote in the state. She could vote with a handgun permit in Texas, but not her student ID.

The 2016 election is the first in 50 years without the full protections of the Voting Rights Act. Texas is a perfect case study of what has happened since the Supreme Court gutted the VRA. Clark is a plaintiff in a lawsuit challenging Texas’ voter ID law, which has been struck down on three different occasions under the VRA but remains in effect while the Fifth Circuit Court of Appeals decides what to do with the case. Clark keeps winning and still cannot vote. (More than 600,000 registered voters in Texas lack a voter ID, but the state has issued just 653 of them over the past three years.)

Imani has won at every stage of the TX #voterID litigation, but still can’t cast ballot today. Not so #SuperTuesday pic.twitter.com/dIXE3pHeQd

She wasn’t the only registered voter to have problems voting on Super Tuesday. Zach Roth of MSNBC reported:

A strict interpretation of the law ended up disenfranchising Taylor Thompson, a student at Texas State University in San Marcos. Thompson’s name on the voter registration card she received in the mail was incorrectly spelled “Tayllor Megan Rose Thompson.” Because it didn’t match her name on her photo ID, which is “Taylor Megon-Rose Thompson,” she was barred from voting. Nor was she was offered a provisional ballot, which would have allowed her to return in the next six days to straighten out the problem and have her vote counted.

Thompson said it would have been her first time voting and she wasn’t sure of the rules, so she didn’t make a fuss.

“It was kind of upsetting,” Thompson said. As a young progressive in conservative Texas, getting to vote “felt like it put more power into my hands,” she added. “And then to not get to do it kind of sucks.”

A Dallas-area man told Election Protection he tried to vote with his [Transportation Security Administration] employee ID but was forced to vote a provisional ballot. Under the ID law, federal government IDs aren’t accepted.

Nor were these the only election problems. Five of 12 states on Super Tuesday had new voting restrictions in effect—Alabama, Georgia, Tennessee, Texas, and Virginia.

Texas ran out of ballots at polling locations. State election websites were down in the morning in Alabama and Texas. Voters were not notified that polling places were moved in Georgia. The Election Protection hotline received over 2,000 calls, the majority from Texas and Georgia, two states that previously had to have their voting changes approved by the federal government under the VRA.

This could be a disturbing preview of what’s to come in the general election, when 16 states have had newer voting restrictions in place since 2012, and Republicans are more likely to target Democratic-leaning constituencies.

“What we saw is that in many places election officials were not ready for the elections,” says Chris Melody Fields of the Lawyers’ Committee for Civil Rights. “People did the right thing, registered to vote, and were turned away from the polls.”