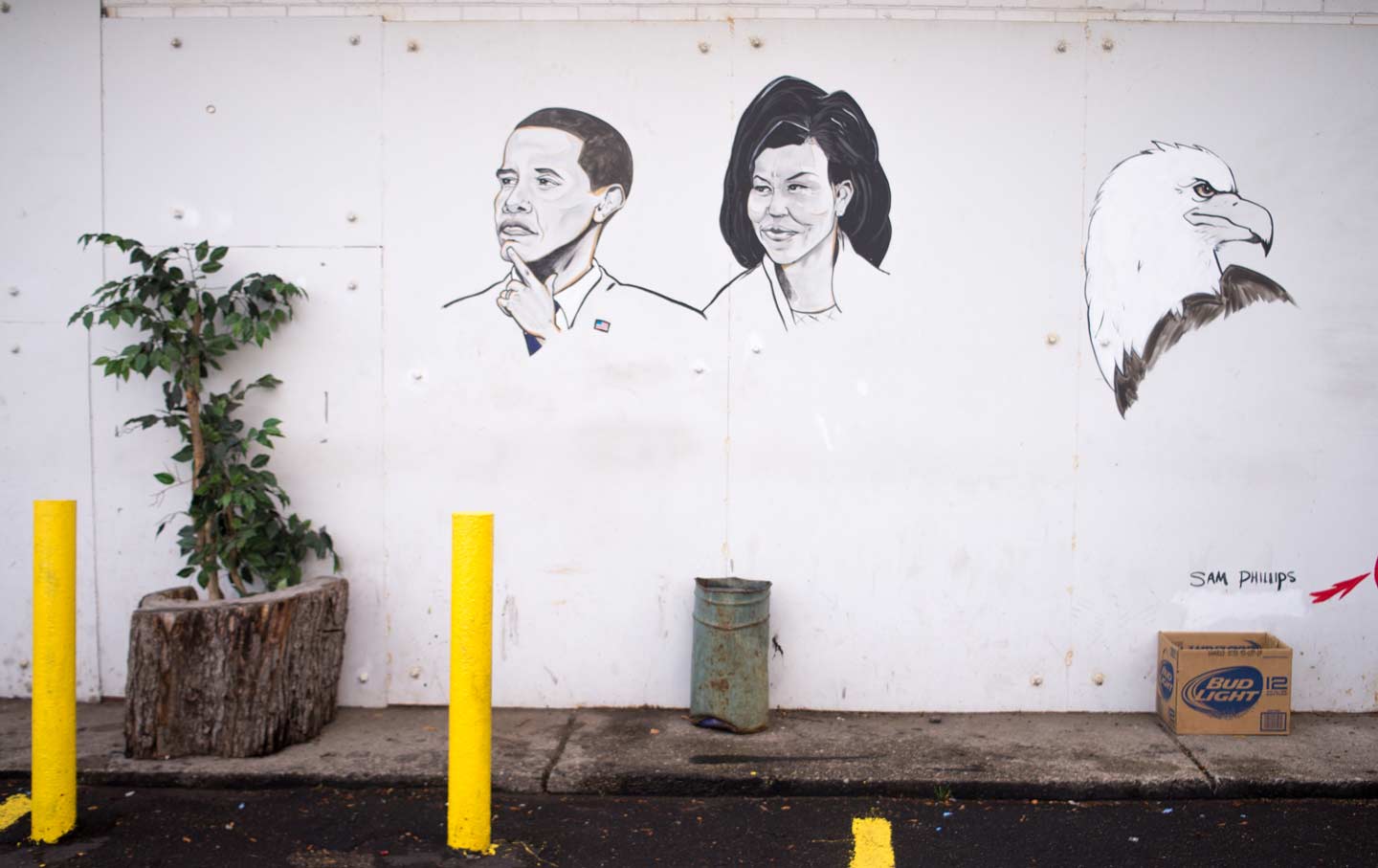 Documenting the murals that decorate the walls of barbershops, restaurants, butcher shops, storefront churches and liquor stores in poor, minority communities has been a decades-long interest of mine.  These examples of popular art employ a relatively small range of symbols, motifs, and iconic figures to remind people of their roots and aspirations. When Barack Obama was elected in 2008, I knew that his likeness would soon be featured in ghettos across the nation, and so I searched inner-city neighborhoods for his portraits and interviewed artists and neighborhood residents. In African-American neighborhoods, President Obama is frequently depicted as a powerful man of action. Folk portraits of him express pride that a black person was able to achieve the presidency, something few believed possible. He is often accompanied by such symbols of American power as the eagle and the American flag. When portrayed in the company of others, he most frequently appears with his wife Michelle Obama, Martin Luther King Jr., Malcolm X, Marcus Garvey, and Jesus Christ. Artist Lance Estos Bradley, proud of the mural he painted for the Tabernacle of Deliverance in central Harlem, remarked: “I picked the photograph myself from the Internet. It reflects a moment in time when a black man was elected president. I didn’t think it would happen in my lifetime, and it may never happen again.” In a mural on Chicago’s South Side, Obama is shown with black inventors, with Michelle, and with Shirley Chisholm—the first black major-party candidate to run for president, in 1972. Also on Chicago’s South Side, pictures of neighborhood people join the president on the wall of Sim’s Barbershop. White people are not included in these murals.

Typically, these paintings are sponsored by businesses to make their stores look welcoming and to discourage taggers. On the former AAA liquor store on Detroit’s East Side, a mural shows the president with the then-owner of the store and members of a black pantheon. Also in Detroit, an Arab-managed gas station was named for the president in 2008, and for three years featured his smiling portrait next to the dome of the US Congress. It has since been renamed Speedy Gas Station and the portrait has been removed. And on a tire shop in Detroit, Obama is portrayed next to the words Patch & Plug. On the side of Luis Meat Market on South Vermont Avenue in Los Angeles, an Obama-themed painting replaced a mural of Martin Luther King, indicating that Obama is perceived as “for everybody,” including Latinos. The new mural, by Chuy Vasquez, combines playfulness, a sense of belonging, and pride. Children of different races appear, as do elements from North America and Mexico, among them a map of the Americas, a Mexican pyramid, an agricultural landscape, the Statue of Liberty, and Christ.  At the center of the work a tropical parrot is portrayed more prominently than the president. In mixed minority neighborhoods, Obama portraits are often the work artists unfamiliar with painting African Americans, who make the president seem Hispanic. In South Los Angeles, leaders such as Benito Juárez join the president. Spanish-speaking businesses are eager to appear friendly to black customers and to present cheerful images that bring the Americas together. On the other hand, solidly Spanish-speaking neighborhoods do not include portraits of African Americans in their murals.

In their choice of people, landscapes and praiseworthy human creations, the Obama murals celebrate a shared vision of popular history leading beyond the struggle to survive.