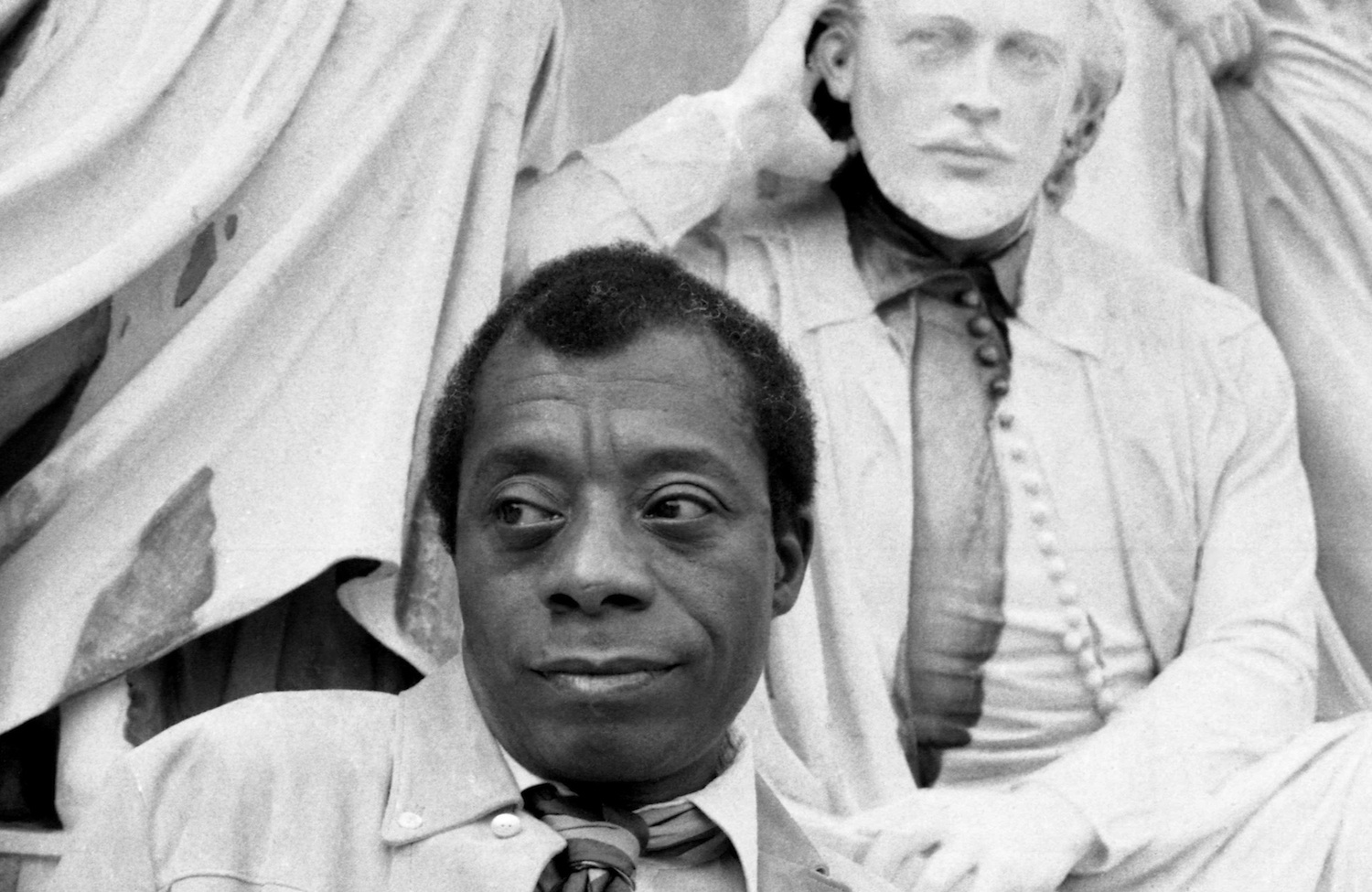 James Baldwin next to a statue of Shakespeare, in London in 1969. Photograph by Allan Warren. (Wikimedia Commons)

Since its founding in 1865, The Nation has been a home for writers instigating, reporting on and arguing about struggles for social and economic justice. We have held fast to our “Nation Ideals”— from racial justice to feminism, from a fair economy to civil liberties, from environmental sustainability to peace and disarmament—throughout our 150-year history. During our anniversary year, TheNation.com will highlight one Nation Ideal every month or two. We’ll celebrate by asking prominent contemporary Nation voices to read and respond to important pieces from our archive. We kick off our very first Nation Ideal with an essay by Mychal Denzel Smith, in which Smith reads and updates James Baldwin’s seminal essay, “A Report From Occupied Territory,” published in The Nation on July 11, 1966. Learn more about our 150th anniversary events and special content here.

If you wish to be taken seriously, there are a few things you need to do before speaking critically of the police. Suggesting that such a vaunted American institution may be fallible is a sin only mitigated by pre-emptively issuing certain caveats. If you’re going to talk about police brutality, for example, you must first say, “The police have a very dangerous job.” If you’re going to talk about unjust laws, you first have to acknowledge that “the police are here to protect us.” If you want to talk about racist profiling tactics, you have to note that “most police officers aren’t racist.” And if you wish to talk about how aggressive policing disproportionately affects black, brown and poor people, subjecting them to daily harassment in addition to pushing them into our nation’s prison system, which has consequences on their economic, political, and social futures, you must first reassure your audience that “not all cops are bad.”

James Baldwin did none of these things.

There is probably no other writer, living or deceased, who has diagnosed the problems of American racism better than Baldwin, and that’s due, in large part, to his refusal to issue those sorts of caveats. We can still turn to him to glean a deeper understanding racism, which he sought to weed out of the American garden, root and branch. He didn’t hedge. He wasn’t especially concerned about being alienated from the mainstream for telling the truth—as a black gay man who had grown up poor in America, he was plenty alienated to begin with. Articulating a vocal and radical critique of the American institutions responsible for that alienation could hardly have left him more powerless than he already was.

In 1966 he turned his big, penetrating eyes toward the police. Here in the pages of The Nation (which has the distinct honor of having been the first publication to carry his work), Baldwin wrote “A Report from Occupied Territory.” A group of young black boys were harassed and beaten by the police, and for their crime of being young black boys, they were punished with long prison sentences. To read it in 2015 is to read an all too familiar story. In some ways, eerily so. I paused in rage upon reading this passage:

…the citizens of Harlem who, as we have seen, can come to grief at any hour in the streets, and who are not safe at their windows, are forbidden the very air. They are safe only in their houses—or were, until the city passed the No Knock, Stop and Frisk laws, which permit a policeman to enter one’s home without knocking and to stop anyone on the streets, at will, at any hour, and search him.

Fifty years on, and we’re not only still having a conversation about stop-and-frisk as a tactic (it has been around for as long as policing), but the language hasn’t even changed. If anything, that’s what’s surprising: most racist practices find new, more creative ways of existing while perpetuating the same order. Redlining becomes subprime mortgage loans. Poll taxes become voter ID laws. Plantations become prisons.

But I suppose it shouldn’t be that shocking because policing, as an institution, has escaped the racist appellation that makes even reform-minded liberals offer condemnation. We admonish the “few bad apples” and make villains out of the most egregious actors (the ones we catch saying “nigger” one too many times), but there is no consensus, even in activist circles, around naming the police a violent arm of racist oppression, which means there isn’t the type of indictment that would have us challenge the necessity of the policing profession.

Baldwin was having none of that. He wrote:

And the police are simply the hired enemies of this population. They are present to keep the Negro in his place and to protect white business interests, and they have no other function. They are, moreover—even in a country which makes the grave error of equating ignorance with simplicity—quite stunningly ignorant; and, since they know that they are hated, they are always afraid. One cannot possibly arrive at a more surefire formula for cruelty.

These aren’t things you could get away with saying today and still be taken seriously as a thinker and a writer. And one might argue that Baldwin only “got away with it” because he was writing these words for The Nation, lefty rag that it was and is. But he also had the advantage of writing this in a pre-Nixon, pre–“law and order,” pre-Reagan, pre–“war on drugs,” pre-Bush, pre-Willie Horton, pre-Clinton, pre–“three strikes,” pre-Bush II, pre-9/11 world. The mythology of police as our national heroes hadn’t quite reached the unimpeachable status it now enjoys. There were certainly consequences for those who dared question the authority of the police—Baldwin writes of one man who observed the beating of the six young boys: “…because he questioned the right of two policemen to beat up one child, he is known as a ‘cop hater’”—but writing that the police have no other function than to “keep the Negro in his place and to protect white business interests” didn’t keep Baldwin from being invited on The Dick Cavett Show. It’s hard to imagine a writer making a similar statement about the police in 2015 and still chit-chatting from the couch opposite Jimmy Fallon on The Tonight Show.

Perhaps it speaks to Baldwin’s ability to make what would be considered radical politics appear self-evident, a goal any of us writing from a left perspective hope to achieve. That’s what makes reading and rereading his essays so exhilarating and frustrating. You’re happy to have found someone who could clearly articulate the position of the occupied in language so clear that the occupier must stand at attention—“The victim who is able to articulate the situation of the victim has ceased to be a victim,” Baldwin would later write. “He, or she, has become a threat.”—but its continued resonance means that the needle has not shifted as much as our progressive narrative would like to pretend.

This is why those pious calls to “respect the law,” always to be heard from prominent citizens each time the ghetto explodes, are so obscene. The law is meant to be my servant and not my master, still less my torturer and my murderer. To respect the law, in the context in which the American Negro finds himself, is simply to surrender his self-respect.

Too many are now conceding to those calls to “respect the law.” We sanitize our truth by adopting parts of the myth. We hope this will make our message more palatable, that we will avoid the sting of our being labeled radical and our ideas unworthy. These are concessions Baldwin was unwilling to make. This is why his work demands our attention to this day. He pointed at the police and told us what they are: a racist occupier that uses violence as means of social and economic control. He offered no excuses.

“These things happen, in all our Harlems, every single day,” he wrote, “If we ignore this fact, and our common responsibility to change this fact, we are sealing our doom.”

Learn more about our 150th events and special content here.