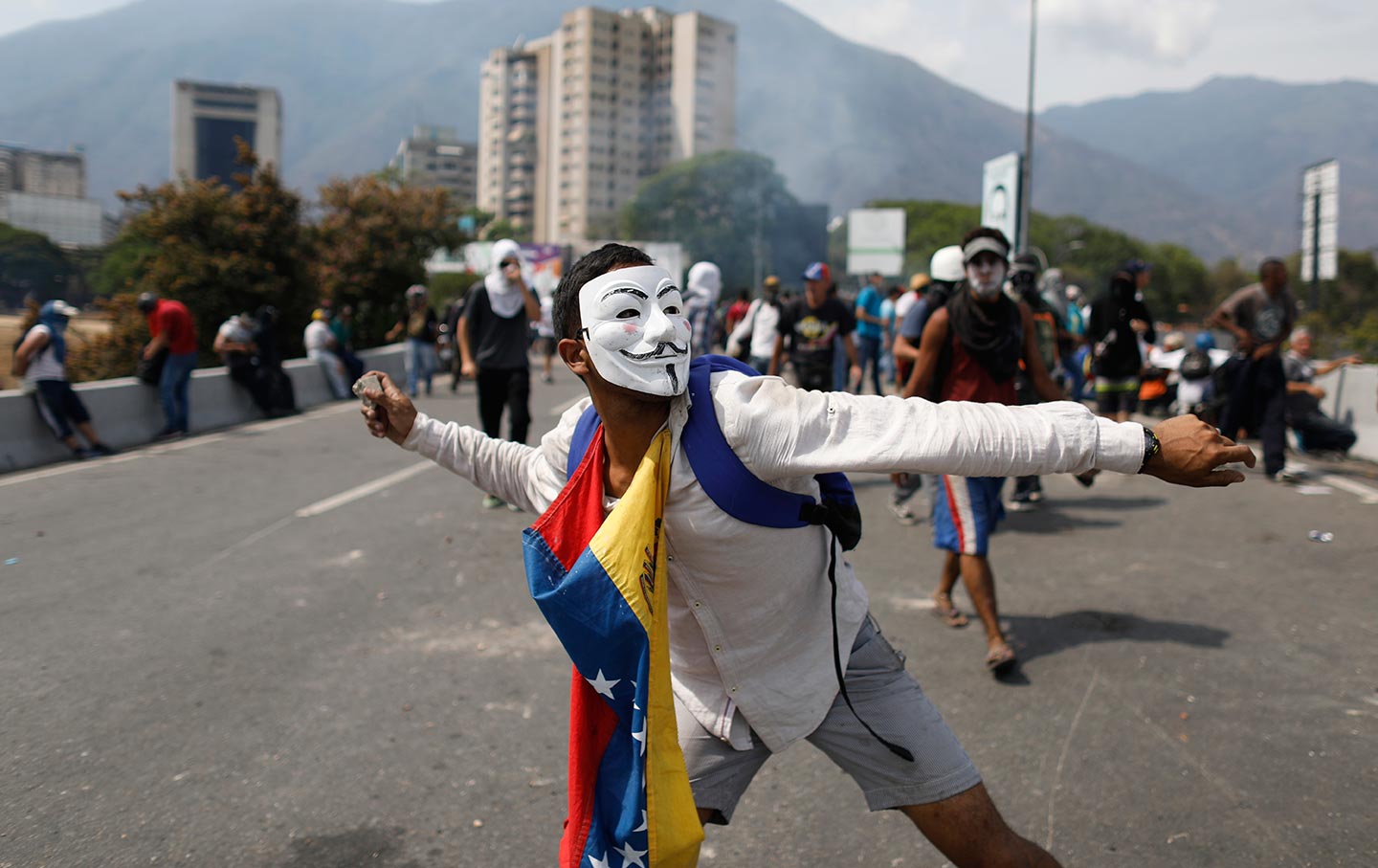 An anti-government protester throws a rock toward security forces inside La Carlota airbase in Caracas on May 1, 2019. (AP Photo / Ariana Cubillos)

In it, Venezuela’s self-declared president, Juan Guaidó, stands in front of a line of military vehicles and rows of Venezuelan soldiers in green uniforms. Beside them is opposition leader Leopoldo López, whom they have freed from house arrest, which stemmed from his role in the 2014 guarimba street protests in which dozens of people were killed.

Guaidó, dressed in a black suit and a white shirt, talks to the camera. “Today, the armed forces are clearly with the people,” he says. “The time is now.” He calls on the military to rise up and says they are in the streets. He insinuates that they have taken the Carlota military base in eastern Caracas.

My phone rings and then rings again. 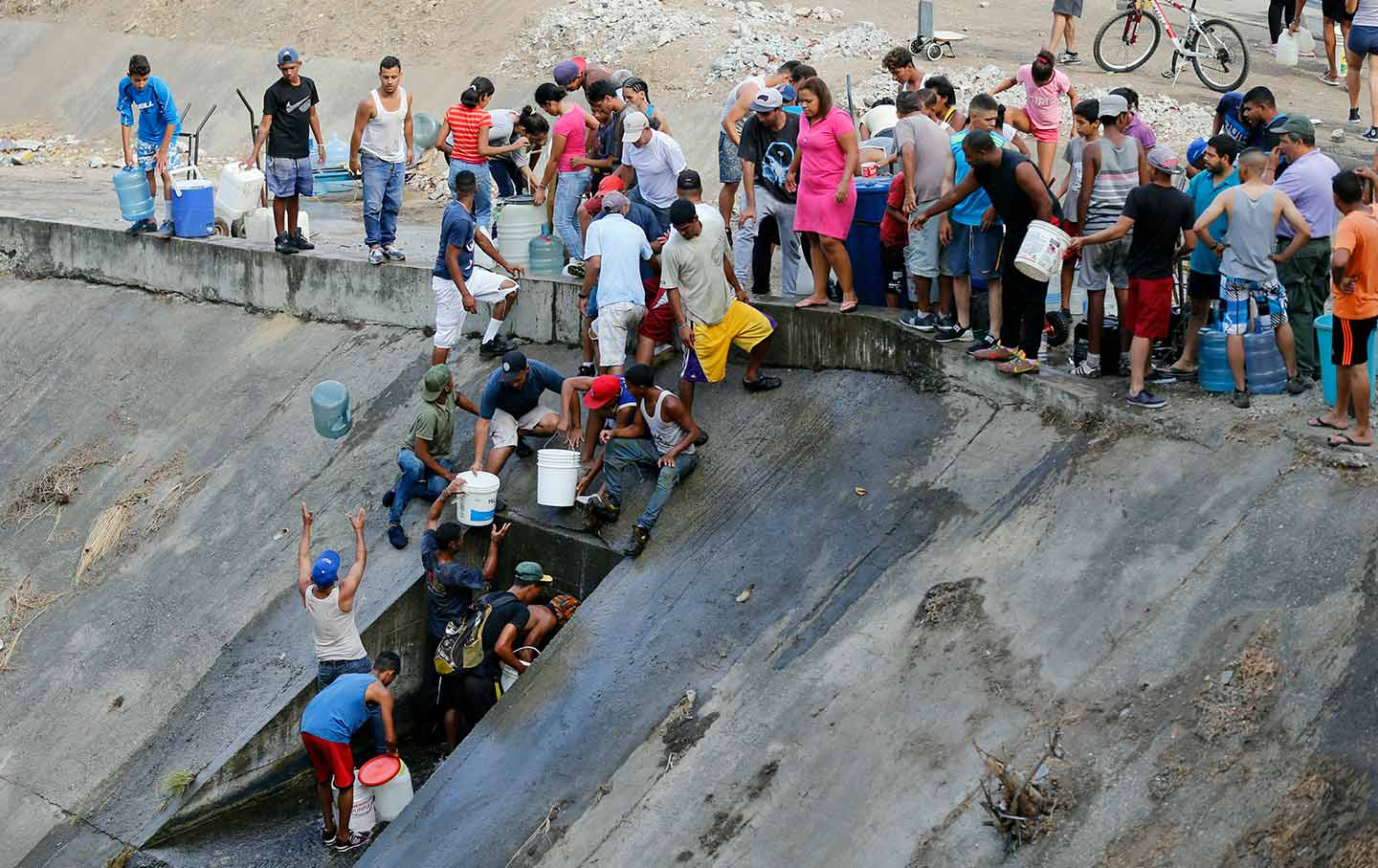 “It looks like there was a coup,” says a friend’s voice. That is what people are thinking across the city. It’s just after 6 a.m., and the sky is still orange from dawn. Neighbors bang pots and pans, the sound rattling through the open window. School is canceled, and the metro is closed. Supporters of President Nicolás Maduro get the word that people are being called to defend Miraflores, the presidential palace, from a potential attack. They begin to make the trek across the city, some by foot, others by bus or car.

A stream of Guaidó supporters flows toward the opposition stronghold of Altamira and the Carlota base, just a few blocks away. But it’s clear that Guaidó has not taken the base; his video was recorded from an overpass nearby.

Hooded protesters hurl rocks and other projectiles toward soldiers loyal to Maduro, who force them back with tear gas. The smoke wafts into the crowds, and people stampede back up the street, screaming and covering their faces.

Estefani Braz stands on a small wall calling for those around her to stay calm. She’s 28, a mother and a graphic designer, with long curly brown hair. “I thought it was over,” she says. “But we’re going to continue fighting and supporting each other because we are going to get out of this.”

Maduro’s ouster seemed within grasp. As if she could almost touch it. But it was just an illusion. Within a few hours, Guaidó and López gave up hope of a military insurrection. López and his wife and daughter requested asylum first in the Chilean embassy and then in the Spanish embassy. Far-right Brazilian President Jair Bolsonaro granted asylum to the couple of dozen Venezuelan soldiers who joined the opposition.

In a video that went viral over social media, at least a dozen soldiers who appeared in Guaidó’s early-morning call for an uprising said they were “tricked,” ordered there by a commanding officer.

Despite these setbacks, Guaidó led thousands in a march heading west from Altamira, but they were turned back by tear gas from the national guard. Rock-wielding hooded protesters and teams of opposition supporters on motorcycles played cat and mouse with the guard. In a scene reminiscent of the violent 2014 and 2017 protests, the protesters blocked roads and set fire to at least one bus and five motorcycles. Rocks and debris covered the streets. Several dozen protesters were injured, largely from tear gas, according to first-aid providers on the scene. Several guard troops were shot by live rounds from Guaidó’s small rebel force.

On the other side of town, thousands rallied before a stage outside Miraflores, where Chavista leaders spoke. They danced to music from large speakers at a rally that would continue through the night in order to ensure that no one would try to take Miraflores.

What began as a threat of wide-scale military insurrection against the Maduro government ended in disastrous failure for Guaidó and the opposition—yet another in a 20-year string of aborted US-backed attempts to overthrow the Bolivarian process.

Even so, thousands of opposition supporters came out for Guaidó’s May Day march on Wednesday, filling most of Altamira Plaza and surrounding streets.

“I don’t feel defeated,” said Aylen Cejas, a teacher and longtime supporter of the opposition. “Many Venezuelans might say this process is too slow, but sometimes it has to be like that.” But those in the crowd seemed subdued, stung by the previous day’s defeat, their hopes lifted and then crushed once more. Earlier, Guaidó said this rally would be one of the largest in Venezuelan history. It didn’t come close.

Guaidó is now calling for a series of rolling strikes leading up to a large national strike to push for Maduro to step down. It is hard to imagine how these strikes will be carried out, since most of Guaidó’s support comes from the middle to upper classes and the country is already suffering hyperinflation that is making it hard for people to get food. The last major strike by the opposition was long ago, the 2002–03 oil lockout, in which top executives in the state oil company, PDVSA, shut down the industry—and the country—for two months.

Meanwhile, across town, hundreds of thousands marched in support of Maduro.

“We are with Maduro—now more than ever,” said Carmen Mejía, an elderly hairdresser, as she marched the final stretch toward Miraflores. “We Venezuelans only have one president, and that’s Nicolás Maduro, and we need to support him.”

Many in the crowd said it was one of the largest and most vibrant demonstrations in support of the Maduro government, echoing marches from the era of his popular predecessor, Hugo Chávez. This point is key: If this march was any measure, the continuing push to overthrow Maduro has had the opposite effect, consolidating his base despite internal divisions and criticism of his government.

“Guaidó’s stupidity is Chavismo’s best ally, because it has unified people in support of Maduro,” said Gilberto Giménez, the president of the small, pro-Maduro Electoral People’s Movement party.

This is a far cry from the image that continues to be pushed by Washington and the opposition, as well as on social media and the international press. On Wednesday night, just two hours after the end of the Maduro rally, Guaidó told Fox News’ Trish Regan that Maduro’s government was crumbling.

“Today, between 91 and 95 percent of our population wants change. Today Maduro is very weak. He doesn’t even have the support of the armed forces,” Guaidó claimed. This illusion, like his Tuesday morning tweet, has helped distort the reality of events here for the foreign media.

Just one hour after Guaidó’s message, the Venezuelan defense minister tweeted that the military remained loyal to Maduro. The street protesters’ battles outside Carlota made clear that Guaidó did not hold that base and that he had no military support beyond a few dozen soldiers. Yet international outlets continued to report that a widespread military uprising was underway. In a story published that evening, which has now been revised, the BBC asked whether Guaidó controlled a substantial portion of the Venezuelan armed forces.

Venezuelans know the power of media. The pretext for the 2002 coup against Chávez was based on images recorded and manipulated by an opposition media outlet to show metropolitan police firing on unarmed protesters. It was a lie, as uncovered in several investigations, including the documentary Llaguno Bridge: Keys to a Massacre, which I narrated and translated into English 15 years ago.

The impact of these policies is profound. Donald Trump insists on Twitter that all options are still on the table for regime change in Venezuela. The fight for the image of Venezuela depends largely on who controls the story—one often told these days in less than 280 characters, in images and video.