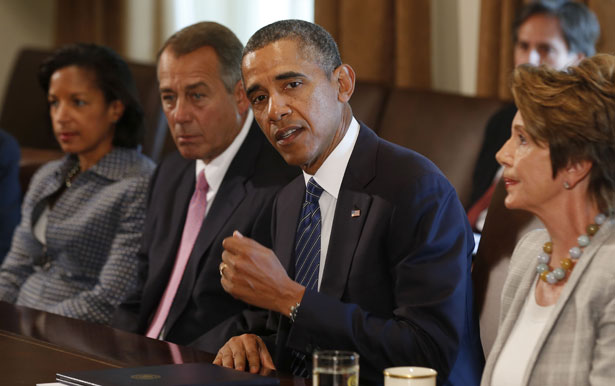 Everyone’s looking for “moderates” in Syria, in advance of efforts to schedule a peace conference in Geneva in November. Moderates may not be too hard to find outside the country, at the posh hotels and conference centers that house the Syrian opposition groups backed by the United States and its allies, but inside Syria moderates are increasingly difficult to locate. The Islamic State of Iraq and Syria (ISIS), the Al Nusra Front and other extremist and pro–Al Qaeda types are increasingly dominant among the rebels against President Bashar al-Assad’s government, and that’s a major obstacle in front of Secretary of State John Kerry’s efforts to bring Syrian oppositionists to the bargaining table in Geneva.

The Free Syrian Army, which represents what purports to be the moderate opposition to the Syrian government in the civil war, is now engaged in a two-front war, battling both the government and the ISIS/Nusra bloc.

And even the moderates outside Syria aren’t exactly thrilled by the idea of going to Geneva. They’re being prodded, cajoled and sweet-talked by the United States, the UK and France, but so far at least they’ve not committed to attending the planned meeting. Yesterday, the main opposition group outside Syria, the Syrian National Coalition, said that would defer a decision on whether to attend. (The Syrian government says it will attend.)

The refusal of the opposition to talk to Assad’s representatives is backed by Saudi Arabia, as reported by Reuters:

Plans for talks to end the fighting in Syria were in jeopardy on Tuesday after the opposition refused to attend unless President Bashar al-Assad is forced from power and a furious Saudi Arabia made clear it would no longer co-operate with the United States over the civil war.

Saudi Arabia, which is fostering the war in Syria as part of what it sees as a regional Sunni vs. Shiite conflict, is in a major snit. Saudi Arabia’s foreign minister canceled his address to the United Nations General Assembly in September, shocking UN members. Then, adding insult to injury, Saudi Arabia turned down a prestigious seat on the UN Security Council—a post the country had long campaigned for—because the Saudi rulers are upset with the UNSC and the United States over what Riyadh considers their insufficient enthusiasm for the kingdom’s Syria policy. Now, according to The Wall Street Journal and other sources, Saudi Arabia is on the verge of a fundamental break with the United States. Prince Bandar, the Saudi Arabian intelligence chief, lambasted the United States, according to the Journal:

Saudi Arabia’s intelligence chief told European diplomats this weekend that he plans to scale back cooperating with the U.S. to arm and train Syrian rebels in protest of Washington’s policy in the region, participants in the meeting said. …

Diplomats here said Prince Bandar, who is leading the kingdom’s efforts to fund, train and arm rebels fighting Syrian President Bashar al-Assad, invited a Western diplomat to the Saudi Red Sea city of Jeddah over the weekend to voice Riyadh’s frustration with the Obama administration and its regional policies, including the decision not to bomb Syria in response to its alleged use of chemical weapons in August.

The Saudis wanted the United States not only to bomb Syria but to do such serious damage that the strike might topple the Assad government. But Obama, who found himself with few international allies and no domestic support for war with Syria, backed down in humiliating fashion and agreed to a Russian plan to disarm Syria.

The program to locate, dismantle and destroy Syria’s chemical weapons, jointly agreed to by the United States and Russia and overseen by the Organization for the Prohibition of Chemical Weapons (OPCW) is going well enough, though the OPCW is hampered by the fact that at least some of the chemical stockpiles are located on bases surrounded by rebels, making it hard for inspectors to get there. But even if the OPCW efforts proceed through 2014, that doesn’t guarantee that diplomatic efforts to resolve the broader conflict peacefully will gain traction. Indeed, because OPCW relies on the assistance of the Assad government to get to and destroy stockpiles of the weapons, many rebels are sullenly uncooperative with the disarmament plan.

Meeting in Paris with ten other nations involved in supporting the Syrian rebels, the United States has admitted that the ISIS faction has made the problem much more difficult, reports The New York Times:

Even as planning intensifies for a Geneva peace conference on the war in Syria, the emergence of a group affiliated with Al Qaeda has undermined the chances of negotiating an end to the conflict, a senior State Department official said on Monday.

Meanwhile, the ISIS/Nusra bloc in Syria is carrying out what can only be called terrorist bombings, massacres and Islamic extremist repression in areas in controls. Its forces carried out a suicide bombing this week that killed dozens of people in Hama, and thousands of foreign fighters with Al Qaeda sympathies are flocking to Syria through Iraq, Turkey, Lebanon and Jordan. Literally dozens of rebel groups in Syria have broken ties with the “moderate” bloc, reports AP:

And Human Rights Watch has documented the involvement of the ISIS-allied rebels in massacres, according to The New York Times:

In a coordinated attack, numerous rebel groups fought off a small garrison of government troops and swept into the villages, killing 190 people, according to a Human Rights Watch report to be released on Friday. At least 67 of the dead appeared to have been shot or stabbed while unarmed or fleeing, including 48 women and 11 children, the report said. More than 200 civilians are still being held hostage.