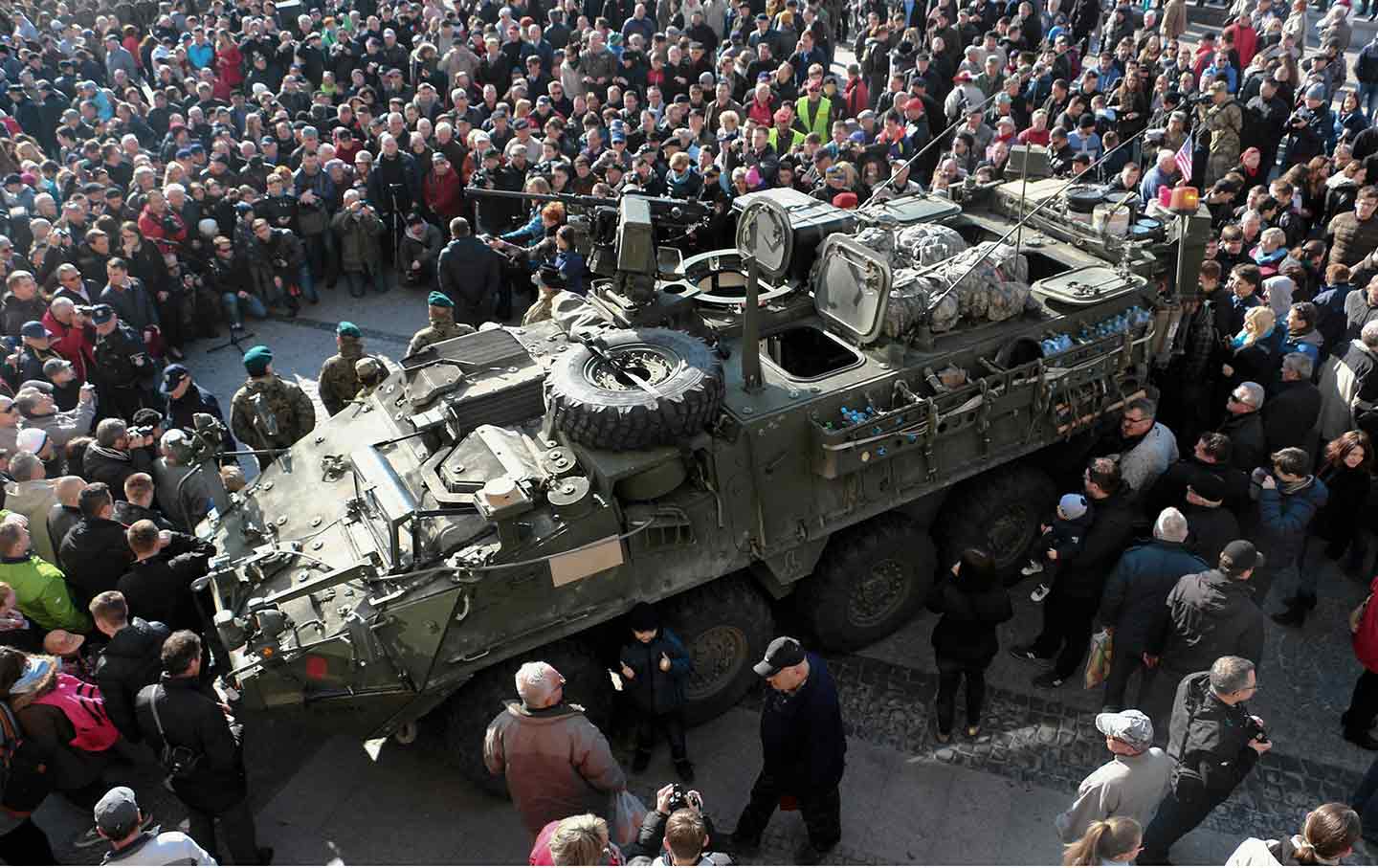 Moscow and Washington have conflicting narratives, expressed in their respective mass media and periodic “diplomacy,” regarding the history, causes, and nature of the new Cold War. Not surprisingly, both narratives are often self-serving and unbalanced. But, Cohen argues, the near-consensual version presented in the mainstream media of the American establishment particularly lacks balance—adherence to the media’s professed standard—and ought to be of grave concern to all Americans. This lack of balance is illustrated—even exemplified—by an array of double standards. Cohen identifies several of them, which he and Batchelor discuss.

§ Moscow is repeatedly condemned for wanting a sphere of security, or absence of Western military bases, near Russia’s borders. Meanwhile, since the late 1990s, the US-led NATO military alliance has expanded from Germany to countries directly on and very near Russia’s borders. With NATO comes not only military but also US political, economic, and cultural influence. In short, NATO expansion eastward represents the greatest expansion of a sphere of influence in modern peacetime history. (Imagine such a Russian-Chinese “sphere” on US borders, in Canada and Mexico.)

§ NATO’s ongoing military buildup near Russia—on land, sea, and in the air—is frequently justified by Russian leader “Putin’s lies and deceits.” Whatever the merits of that allegation, the Kremlin’s complaints about American “lies and deceit” can hardly be challenged. They include a 1990 promise—in return for Soviet leader Gorbachev’s acceptance of a united Germany in NATO—that NATO would “not expand one inch to the east”; repeated subsequent promises that NATO expansion would involve no forward-based military forces; and the Obama administration’s pledge in 2011 that the UN Security Council resolution permitting use of force against Libya would not seek to remove its leader Gaddafi, who instead was tracked down and assassinated.

§ US media accounts of the Georgian-Russian war in 2008 and the Ukrainian crisis that erupted in 2014 invariably blame “Putin’s aggression.” But a European investigation found that Georgia, then a US ally, initiated the war. And indisputably, the Kremlin’s reaction in Ukraine after the overthrow of the country’s elected president in 2014 was shaped by its reasonable perception that NATO (that is, Washington) had Ukraine on its client agenda. In any balanced account, who was “aggressive” in these instances? Or in Moscow’s perception when it considers the reported 800 US military bases abroad as compared with Russia’s very few, significantly only in Syria (depending on whether Crimea is considered “abroad”)?

§ When Russian air power and the Syrian army “liberated” the Syrian city of Aleppo from terrorists last year, the US political-media establishment denounced the operation as “Russian war crimes.” There were no such characterizations in the US media establishment of the subsequent American-led “liberation” of the Iraqi city Mosul or Syria’s Raqqa, where destruction and civilian casualties may have been considerably greater than in Aleppo. Indeed, Washington Post columnist David Ignatius was awed by “the overwhelming, pitilessly effective military power of the United States” displayed in Raqqa.

§ Russia’s nonviolent “annexation” of Crimea in 2014—the Kremlin and a majority of Russian citizens regard it as “reunification”—has been roundly condemned and sanctioned by Washington and by the European Union ever since. American media explain that this was the first forcible modern-day realignment of borders and territory, a narrative that omits the Balkan wars in the 1990s and the fate of what was once Yugoslavia, and especially US-led NATO’s annexation of the Serbian province of Kosovo, after a long bombing campaign against Serbia, in 1999. It also omits secession movements since Crimea—Brexit and the recent Catalonia and Kurd referenda. These developments suggest a much larger, deeper international process under way than “Russian aggression”—one involving issues of self-determination, globalization, sovereignty, and complex international laws—but rarely considered in US media coverage of Crimea or the ongoing civil war in Eastern Ukraine.

§ An outgrowth of US media coverage of “Russiagate” has been the allegation that the Kremlin, using its foreign broadcast outlets and social media everywhere, has promoted right-wing, white-supremacist, neo-Nazi movements in Europe and particularly in the United States. Some of this commentary gives the preposterous impression that the Kremlin created racial conflict in America or is primarily responsible for “exacerbating” it. Meanwhile, the US establishment has virtually nothing to say about a truly ominous development—the steady growth and increasingly assertiveness of extreme-right-wing, even significantly neo-Nazi, movements in US-backed Ukraine. Bluntly stated, with the tacit support, indifference, or impotence of the Kiev government, these movements, some well-armed, are rehabilitating and memorializing Ukrainian Jew-killers during the World War II Germany occupation—rewriting history in their favor, erected memorials and renaming public places in honor of their historical leaders, occasionally bluntly threatening Ukrainian Jews. Though well-reported in foreign and alternative media, these obvious signs of a rebirth of surging fascism in a large European country—one supported politically, financially, and militarily by Washington—are rarely, if ever, noted in the American mainstream media, especially not even The New York Times, for which such developments would normally be front-page “news fit to print.” A recent large-scale torch-bearing march through central Kiev, with indicative neo-Nazi symbols and other expressions, for example, went virtually unreported by our establishment media. Where is the balance between this unreported ominous reality and daily allegations of some murky “Russian” divisive posts in American social media?

§ Finally, another example. Almost daily, the Kremlin is accused of “meddling” in the US 2016 presidential election, along with alarmist warnings that “they will be back!” Again, Cohen points out, no actual evidence has yet been verified. Nor is any balance provided in these media accounts. Notably, a scholar has pointed out that in the years from 1946 to 2000 the United States and Russia interfered in 117 foreign elections. Moreover, Washington and its appendages have “meddled” in every Russian election since the end of the Soviet Union in 1991, in one way or another. There is one not-so-distant, dramatic case: the very large-scale, onsite “electoral experts” project dispatched by the Clinton administration to manage failing Russian President Yeltsin’s reelection campaign in 1996. (Cohen was in Moscow that year and heard first-hand account of its intrusive “meddling” and indeed witnessed some of its presence.) Still more, the US media then boasted loudly of America’s essential “help,” as in a Time magazine cover story and an HBO film. That is, Cohen emphasizes, balanced coverage, analysis, and policymaking must also be historical.

And yet, Cohen concludes, our new Cold Warriors denounce criticism of such US double standards as “moral equivalence” and pro-Kremlin “whataboutism.” But facts being facts, these self-apologetics are actually an extreme, and exceedingly dangerous, expression of “American exceptionalism.