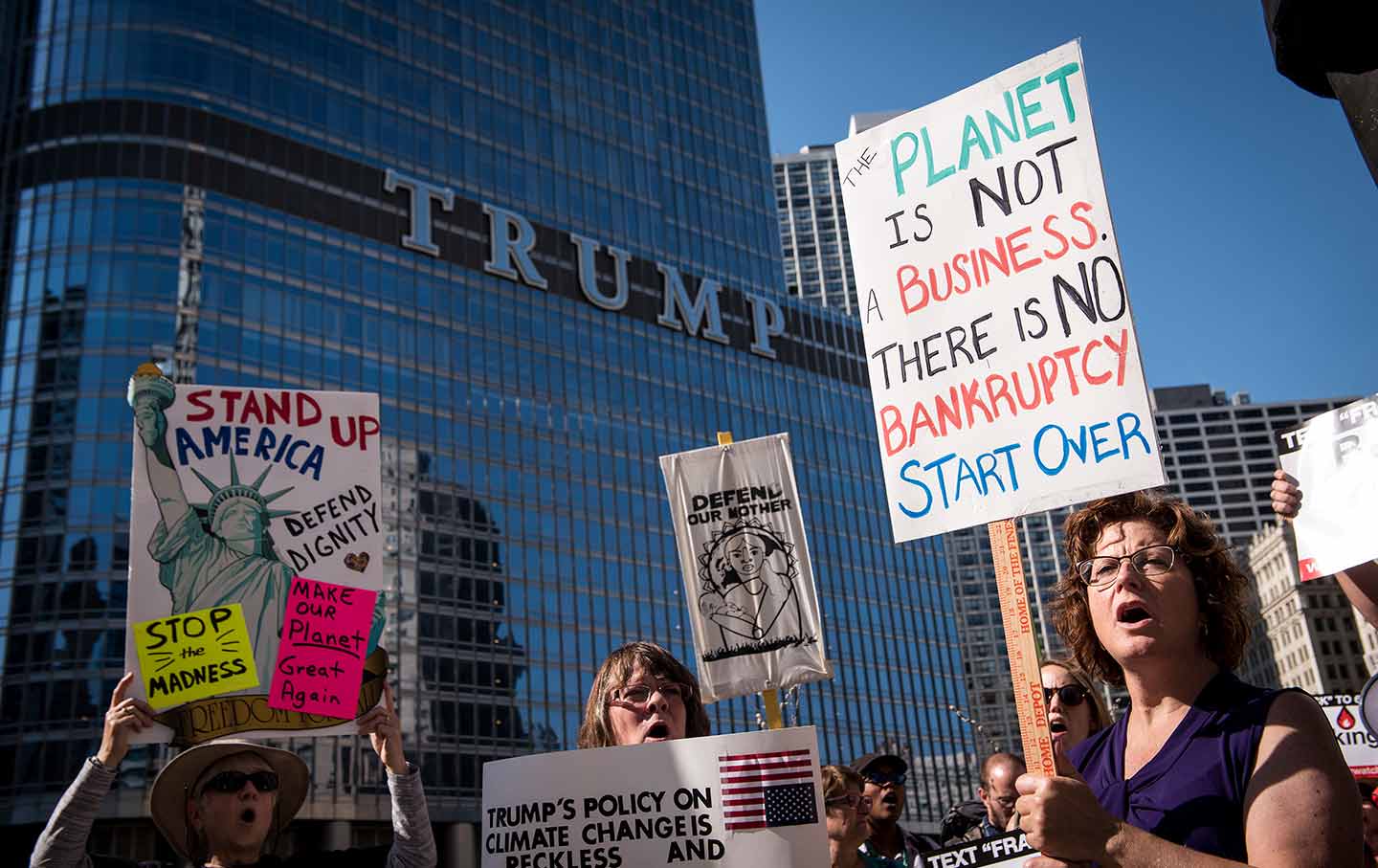 EDITOR’S NOTE: Just days before his death this past April, the eminent theorist Benjamin Barber published his final book, Cool Cities: Urban Sovereignty and the Fix for Global Warming. The book is a passionate call to action, a nudge to cities to claim their rightful place in the fight against climate change. When it was published, it felt like a smart, idealistic argument. Today, in the wake of Trump’s decision to withdraw from the Paris Climate Agreement—followed by a surge of US cities vowing to honor the agreement—it feels prescient. What follows is a brief excerpt.

Centuries ago, when the idea of a social contract was established in the West, the sovereign governing bodies able to secure life and liberty were conceived as nation-states. But as the world has become more global and interdependent, sovereign nations and their international networks have grown less effective, sometimes even dysfunctional. Survival—a sustainable world—depends more and more on citizens acting locally in the name of global goods, of which climate change and decarbonization are prime examples. Sustainability today entails glocality, action that is simultaneously local and global. Municipal policies must be crafted with an eye on their impact not over months or even years but over generations, as well as among communities and peoples across the interdependent planet.

Of the many threats to a sustainable world, none is more dramatic and perilous than human-induced climate change and its consequences, which include global warming, sea-level rise, and extreme weather. The collective impact of these consequences is putting civilization at risk—indeed, perhaps putting life on earth at risk. For even though as Lynn Margulis liked to say, “Gaia is a tough bitch,” whether the planet is tough enough to deal with our species’ hubris is yet to be seen.

I propose in this volume to address climate change by focusing on municipal approaches to renewable energy and a non-carbon economy, to decarbonization in a metropolitan setting. Cities can do decarbonization, and when they act interdependently, they can do it on a scale relevant to global warming.

The agency and actions needed are urban and local rather than national. Cities are home to more than half of the human population and more than three-quarters of the population of developed nations. They generate 80 percent of global GDP as well as 80 percent of greenhouse gas emissions. They also suffer the lion’s share of the economic damage from extreme weather events and sea-level rise. Along with agriculture, they consume much of the planet’s water, and the metropolitan regions they define house the factories and plants that run on carbon energy and account for a preponderance of carbon emissions. Private-sector automobiles and trucks are massively polluting, and public transit systems, unless they are upgraded and electrified, make things worse. The density and lack of green space in cities make them an environmental problem from the get go. Yet density also gives them a smaller collective carbon footprint per capita than suburbs or rural regions.

Cities are the problem. But cities, as both the prime sources and prime victims of climate change, can also be agents of remediation: politics at the municipal level may prove the equal of climate change at the global level. We can take the solution into our own hands. Whether we will is the question of the hour, and of the millennium.

We certainly are not likely to succeed if we depend on aging nations, which have already proved their deep incapacity to address global problems. Their dysfunction runs deep, and democracy appears to be in retreat, not only in the obvious places like Russia but also in Brazil, where an entire government was impeached in 2016 just before the Olympics; in the Philippines, where a demagogic mayor has become president; in Hungary, Poland, and Belarus, where populist and antidemocratic governments have been democratically chosen; and in the United States, where partisan gridlock has paralyzed governance, while a divisive and angry presidential election in 2016 left many American citizens disturbed and fearful for the democratic process itself. The crisis in national governance is a crisis in sovereignty, in the capacity of the nation-state to make good on the terms of the social contract on which their founding legitimacy turns.

Ideally, good-willed national states and international governing bodies would acknowledge their growing sovereign inadequacies and welcome, rather than condemn, urban efforts to solve global problems whose remedy has eluded them. In practice, that has not always been the case.

In federal states with a vertical separation of powers, such as India, Germany, Brazil, Canada, and the United States, local governments more readily accept power sharing. Although the classical theory of sovereignty leads unitary governments with hierarchical power structures to be chary of local autonomy, even strong top-down administrations sometimes tolerate a certain municipal outspokenness. Nonetheless, they hold strongly to the view that cities must finally be regarded as administrative subsidiaries of the state. In France, England, and China, for example, cities enjoy little jurisdictional autonomy. Deprived of both resources and jurisdictional competence, they are unable to walk an independent path.

This stern view of the subsidiarity of cities has softened recently as a result of an emerging recognition that cities do get things done and that the devolution of authority can benefit national as well as local government. The relationship between city and state cannot, however, be left for nation-states alone to define. As the representatives of citizens, who are in turn the ultimate source of sovereignty, municipalities understand that their claim to jurisdiction rests not only on their capacity to act effectively but on their right to do so when higher jurisdictions fail to discharge the responsibilities of sovereignty….

In the spirit of rights, if cities are impeded from defending their communities’ sustainability, they must take to their own streets and fight for what is theirs. Mayors must manifest the rights of cities, fight for those rights, and if necessary go to court or jail for them. The way ahead is likely to be smoother than this implies, and the relationship between cities and national governments likely to be complementary rather than antagonistic. But the jurisdiction and resources cities require in order to make good on their responsibilities are not a gift handed down at the discretion of states—they are a right that cities must claim.

To many observers, the claims made by local governments in the name of universal rights will sound peculiar, even nonsensical. But there has been an ironic shift in the valence of national and local governing bodies with respect to universal rights. Where once nations advocated for civic, social, and economic rights while supposedly parochial states and cities opposed them, more often nowadays it is cities that promote universal claims concerning gender rights, gay marriage, higher wages, and environmental sustainability—cosmopolitanism in its true meaning—while states grow small-minded, mean, and parochial.

If cities are impeded from defending their communities’ sustainability, they must take to their streets and fight.

The salient division today throughout the world is between the party of urbanity, embodying values such as creativity, imagination, pluralism, entrepreneurship, liberty, and social justice; and the party of parochialism, whether it is parochialism of the land (La France profonde or the Tea Party), parochialism of ethnic and religious tribes, or even the parochialism of nation-states trapped inside fading national borders.

This division can lead us to despair about national politics when a climate-denying purveyor of fear and hate like Donald Trump wins the presidency, or when xenophobic majorities run rampant in Austria, Hungary, Poland, and even the Philippines. Yet on the other side of the division are inspiring urban stories in which Londoners elect the son of a Pakistan-born bus driver (Sadiq Khan) by a huge majority as their mayor; Rotterdam residents choose a Moroccan-born Muslim (Ahmed Aboutaleb) as their Bürgermeister not many years after angry fellow citizens were calling for the blood of Muslims; a mixed-race Englishman (Marvin Rees) becomes mayor of Bristol, once a leading port city in Britain’s eighteenth-century slave trade; and meanwhile, a capital of the American South elects a brilliant African-American (Kasim Reed) to city hall while Newark, New Jersey, sends a former African-American mayor to the US Senate (Cory Booker) and elects a successor, Ras J. Baraka, who is the son of the great playwright Amiri Baraka (Leroi Jones).

In each case, it is a city that manifests the inclusive spirit of citizenship while nations wallow in insular nationality and competitive ethnicity. Now imagine citizens mobilizing their cities around a cosmopolitan party that is serious about implementing the Sustainable Development Goals, in whose name nations raise their voices but otherwise do little. Richard Schragger has it right: in order “to come to terms with the exercise of urban democratic power . . . a political movement is what is required.”

An urban political movement is not a pipe dream: in the 2016 municipal elections in Beirut, nearly 40 percent of the population abandoned tribal voting and factional parties like Hezbollah, the Sunni Future Movement, and various Christian warlord groups to vote for Beirut Madinati, or “Beirut, My City.” Madinati grew from the bottom up as a result of anger over a garbage strike and an earlier “You Stink!” campaign (garbage is one of the things citizens actually care about). A winner-take-all system denied the new Madinati movement representation in city government, but given that it almost toppled the old government even as it “refused help from any veteran politicians, and ran a slate of candidates evenly divided between men and women, Muslims and Christians,” as reported in the New York Times, it was a powerful symbolic victory for the cosmopolitan ideal incarnated as practical political struggle.

Cities and their citizens, in short, have rights, and these rights allow them to claim jurisdiction in addressing climate change. Their ability to succeed where states are struggling will depend on more than exploiting the vacuum left by the sovereign default. It will require that they put flesh on the bones of right, and muscle behind their technical know-how. It will be about politics, not science—democratic politics.