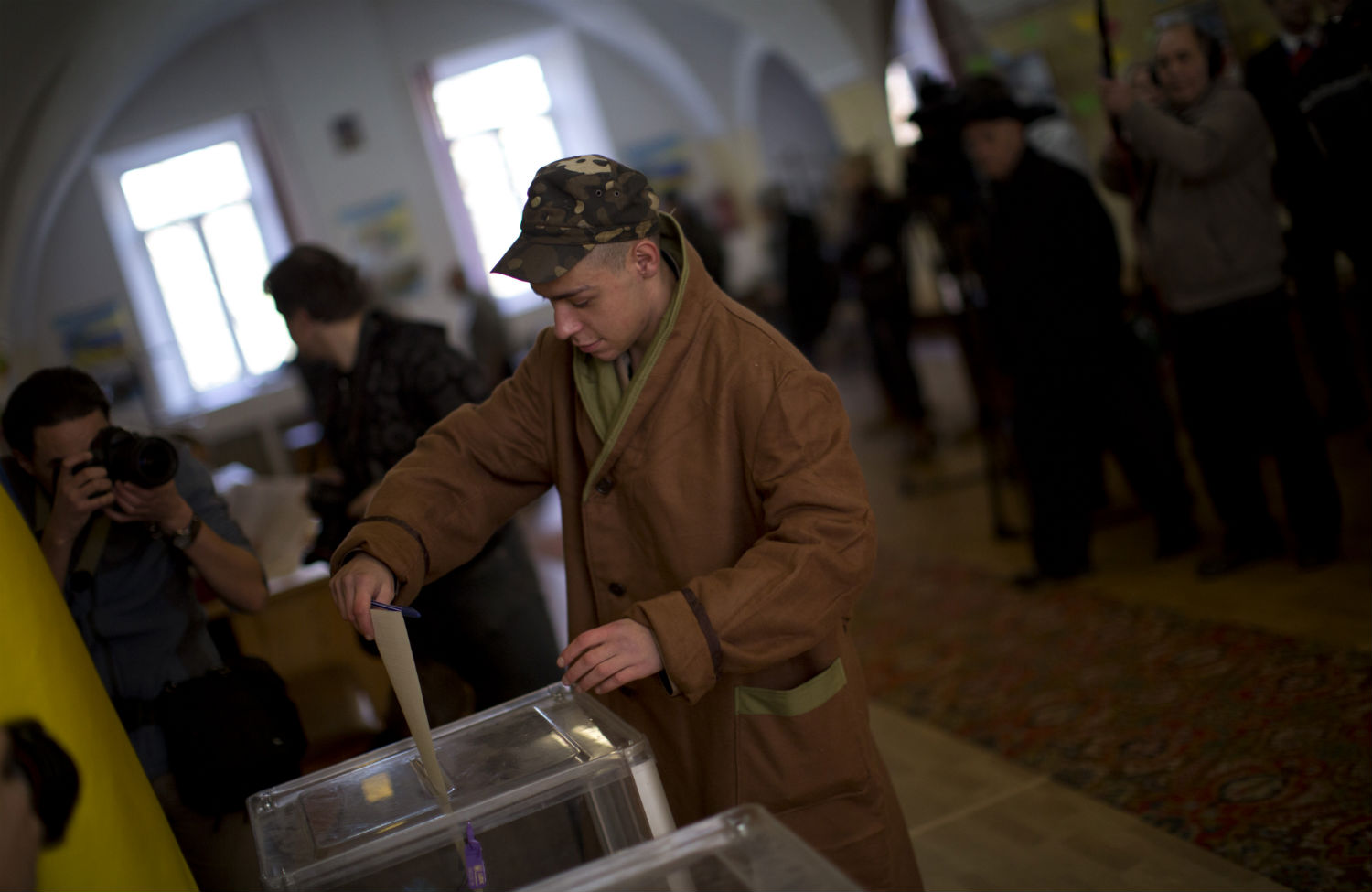 A Ukrainian soldier casts his vote for the parliamentary elections at a polling station at a military hospital in Kiev, Ukraine, Sunday, Oct. 26, 2014. (AP Photo/Emilio Morenatti)

The latest parliamentary elections in Ukraine have been characterized in the West as a victory for pro-European forces.

But the terms “pro-European” and “anti-European” no longer serve as useful reference points in Ukrainian politics. In these elections, after all, not one of the twenty-nine parties that stood for election was officially opposed to EU entry.

The real issue in this election was war or peace.

President Petro Poroshenko called for snap elections just before going to Minsk to meet with Vladimir Putin on August 27 to request a cease-fire. Subsequent negotiations led to the signing of two documents, on September 5 and September 19 outlining terms for the ceasefire and for a future political settlement in Eastern Ukraine. The terms of the Minsk accords, however, split his government. The prime minister, minister of interior and speaker of parliament even set up their own political party—the Popular Front—which won the elections.

This election was thus, first and foremost, a referendum on Poroshenko’s decision to halt the military campaign and grant de facto autonomy to the rebel controlled regions.

The results must be disappointing to the supporters of peace. The parties that opposed the Minsk accords (Popular Front, Fatherland, and the Radical Party) got more than 35 percent of the party list vote, while the Poroshenko Bloc, which at the outset of the campaign was projected to get nearly 40 percent of the vote, actually got fewer than 22 percent. The only other party in the Rada to endorse the peace plan, the Opposition Bloc, barely got 10 percent of the vote.

These results underscore the rise of militant nationalism among the Western and Central Ukrainian electorate. That is where the parties opposed to the Minsk accords did especially well. By contrast, the parties that placed peace first on their campaign agenda (Opposition Bloc, Communist Party and A Strong Ukraine) did especially well in the East and South. The Opposition Bloc, the successor to the now defunct Party of Regions, won in five of the eight predominantly Russophone regions.

The seating mechanism used in Ukraine, which is not at all unusual among parliamentary democracies, actually served to reinforce this regional division. In the Russophone regions, for example, the Communist Party received 9.2 percent of the vote on average, while Strong Ukraine received 8.2 percent. This combined 17 percent, however, will not receive a single seat in the national parliament because neither party managed to get five percent of the total national vote. That is also why the nationalistic Svoboda and Right Sector parties will not be seated in the next parliament, though it is worth noting that their percentage of the local vote in nine Western and Central regions of Ukraine, was less than 7 percent on average. Thus, the results inflate the significance of nationalistic parties that are strong in the west and center, while muffling the voice of parties popular in Russophone Ukraine.

To be sure, the nationalist agenda is likely to be tempered somewhat by the fact that a significant percentage of single-mandate seats in the more populous east and south will be filled by candidates from the Opposition Bloc, “independent candidates” who were formerly part of the Party of Regions and the Poroshenko Bloc.

But the political agenda of the parliament is set by parties, not by individual members of parliament, and if in the previous Rada the nationalistic parties—for whom it was key to emphasize Ukraine’s distinctiveness from Russia, oppose bilingualism, rewrite history textbooks and treat those Ukrainians who fought alongside Nazi Germany as honored veterans—comprised less than a third of the party list, in the next Rada that figure will be closer to three-quarters.

What then can we expect from this new nationalist parliament?

Supporters of the current majority expect rapid progress on “lustration”, anticorruption and economic progress, as well as a decisive military victory over the rebels in the East. Unfortunately, the money for these things is simply not there.

It is therefore likely that actual progress will be replaced by ever more intense anti-Russian and nationalistic rhetoric, which will only heighten the sense of alienation felt by Ukrainian Russophones.

New legislation prohibiting Russian cultural performers, televisions shows and movies might suffice to show progress on the nationalist agenda for a while. Beyond that, however, parliamentary speaker Oleksandr Turchynov has already said that he hopes there will now be a sufficient majority to change the constitution. In that case, one initiative likely to be adopted is to eliminate, or severely curtail, the 2012 language law that allowed individual regions to adopt a second language, such as Russian.

If such constraints on minority rights are indeed adopted, it will lead to a new spiral of conflict in the east, and to a political trajectory for the country as a whole that will resemble illiberal democracy. Such democracies hold regular elections, but without institutional guarantees of basic freedoms, or legal support for opposition public activity. Minority rights typically suffer first.

Of course, this pretty much also describes every previous Ukrainian government. The difference today, however, is the value added by the institutional presence of so many militant nationalists, which strikes me as unlikely to contribute to constitutional liberalism.

Such an outcome is not inevitable. One way out might be to grant meaningful economic and political self-rule to all regions of Ukraine. On this point, paradoxically, the third largest party, Self-Help, led by the mayor of the western Ukrainian city of Lviv, is in full agreement with the leaders of Donbass. The only problem is that meaningful political devolution is quite unpopular among the nationalist majority in parliament, who see it as wresting control of the national political and cultural agenda out of their hands.

The coming months will reveal whether the new government embraces the course of radical or moderate nationalism. If it is the former, then Ukraine’s “European” choice may wind up being more reminiscent of Europe in the 1930s, than of Europe today.