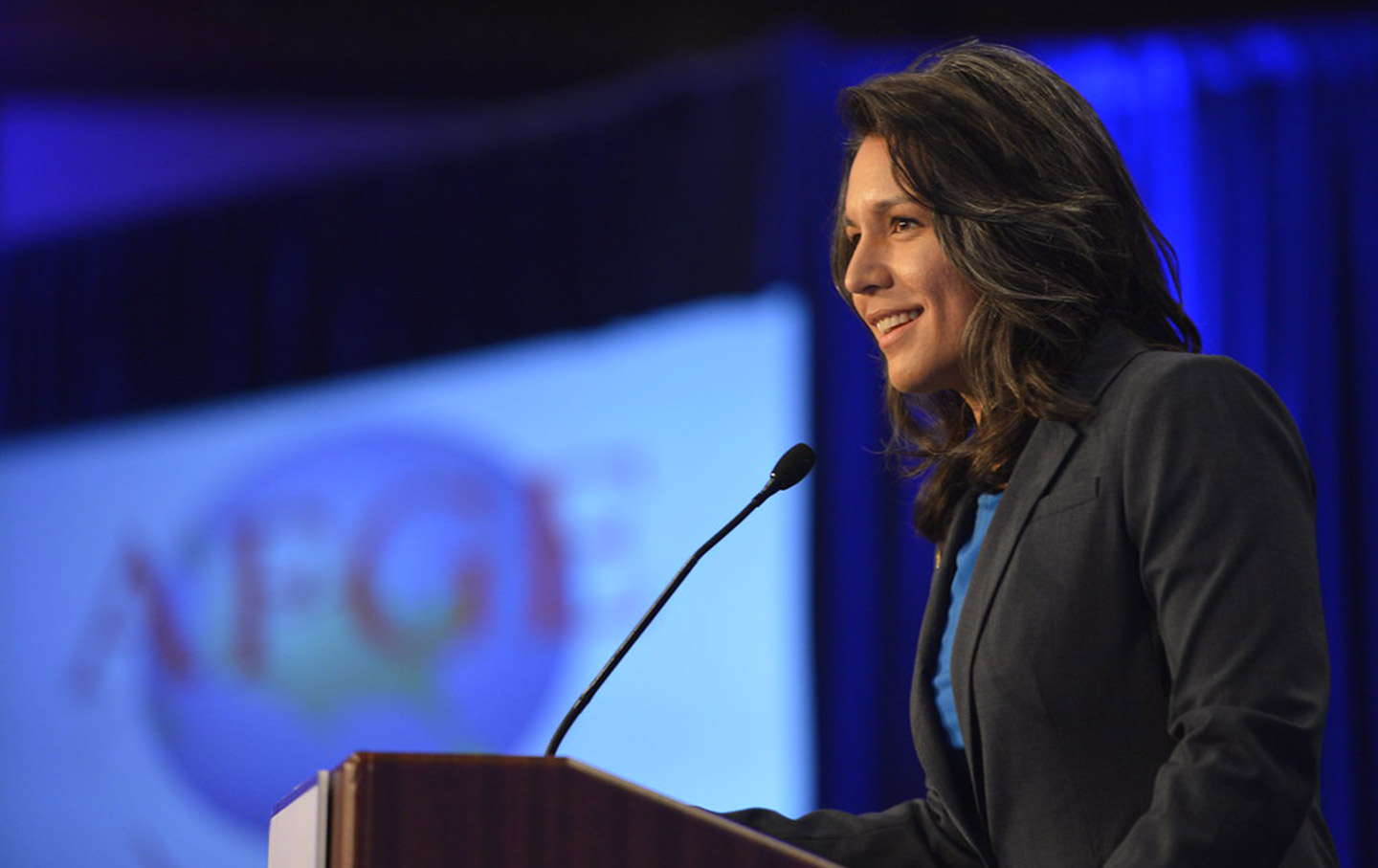 Google Trends found that after the first Democratic presidential debate in Miami, Tulsi Gabbard was the most searched candidate. Makes sense. The congresswoman from Hawaii brought a bold critique of “regime-change wars,” nuclear proliferation, and failed foreign policies to the debate stage. She made statements that some characterized as controversial and that others thought necessary; she reflected on her apology for socially conservative positions she once embraced; and she engaged in one of the few actual debates in the debate: a clash with Ohio Congressman Tim Ryan over continued US involvement in Afghanistan that saw Gabbard win loud applause for her declaration that “we have to bring our troops home.”

She also delivered one of the most effective takedowns of President Trump and his inner circle heard during two nights of debating. “War with Iran would be worse than war with Iraq,” the Iraq War veteran, who is the first female combat veteran ever to seek the nomination for the presidency, announced on Wednesday night. “Donald Trump and his chickenhawk cabinet—Mike Pompeo, John Bolton, and others—are creating a situation where a spark would light a war with Iran. Trump needs to get back into the Iran deal, swallow his pride, and put America first.”

But last week’s debate stages were so crowded that none of the candidates, many of whom poll toward the back of a field that now includes more than two dozen contenders, got very far in presenting a nuanced, let alone comprehensive, worldview. Gabbard did more of that when she addressed the 87th Annual US Conference of Mayors over the weekend.

In her speech to the mayors who had gathered in Honolulu, the congresswoman made the case that “regime change wars” are costing communities across the country too much—and that they must be understood as local issues.

“That’s why,” she explained, “it’s imperative that every mayor, every leader at every level of government take action to stand up and speak out about this danger of nuclear war that we’re facing, speak out against these wasteful regime change wars and this new cold war that’s sucking money out of our pockets and our communities.”

That’s an important message that ought not be lost in the 2020 cacophony.

Cities are dramatically impacted by foreign-policy choices, and by the federal budget priorities that extend from them. They also have the potential to be serious players on the global stage. It’s notable that Trump goes out of his way to attack London Mayor Sadiq Khan, and that Khan has emerged as one of the most pointed critics of the American president—writing recently that “Donald Trump is just one of the most egregious examples of a growing global threat. The far right is on the rise around the world, threatening our hard-won rights and freedoms and the values that have defined our liberal, democratic societies for more than seventy years.”

American mayors have joined urban leaders around the world to focus on the climate change issues that the Trump administration neglects. And they have frequently spoken up about international human rights abuses.

Two current mayors, South Bend, Indiana’s Pete Buttigieg and New York City’s Bill de Blasio, joined last week’s debates, as did a former mayor: Vermont Senator Bernie Sanders, who led that state’s largest city for much of the 1980s. Gabbard is not the only candidate who recognizes foreign policy as a local issue. But she is talking about the issue in smart ways.

In particular, she is focusing on the threat posed by nuclear weapons. The congresswoman noted Trump’s dismissive attitude toward agreements that seek to prevent nuclear proliferation, while reminding the mayors of the preparations their cities must make for missile alerts and other potential threats.

Recalling a false alert that caused panic in Hawaii last year, Gabbard told the mayors, “We need a radical change in our foreign policy to prevent this kind of thing from happening, and to make sure that our children and our families and generations to come can live free from fear of a nuclear war.”