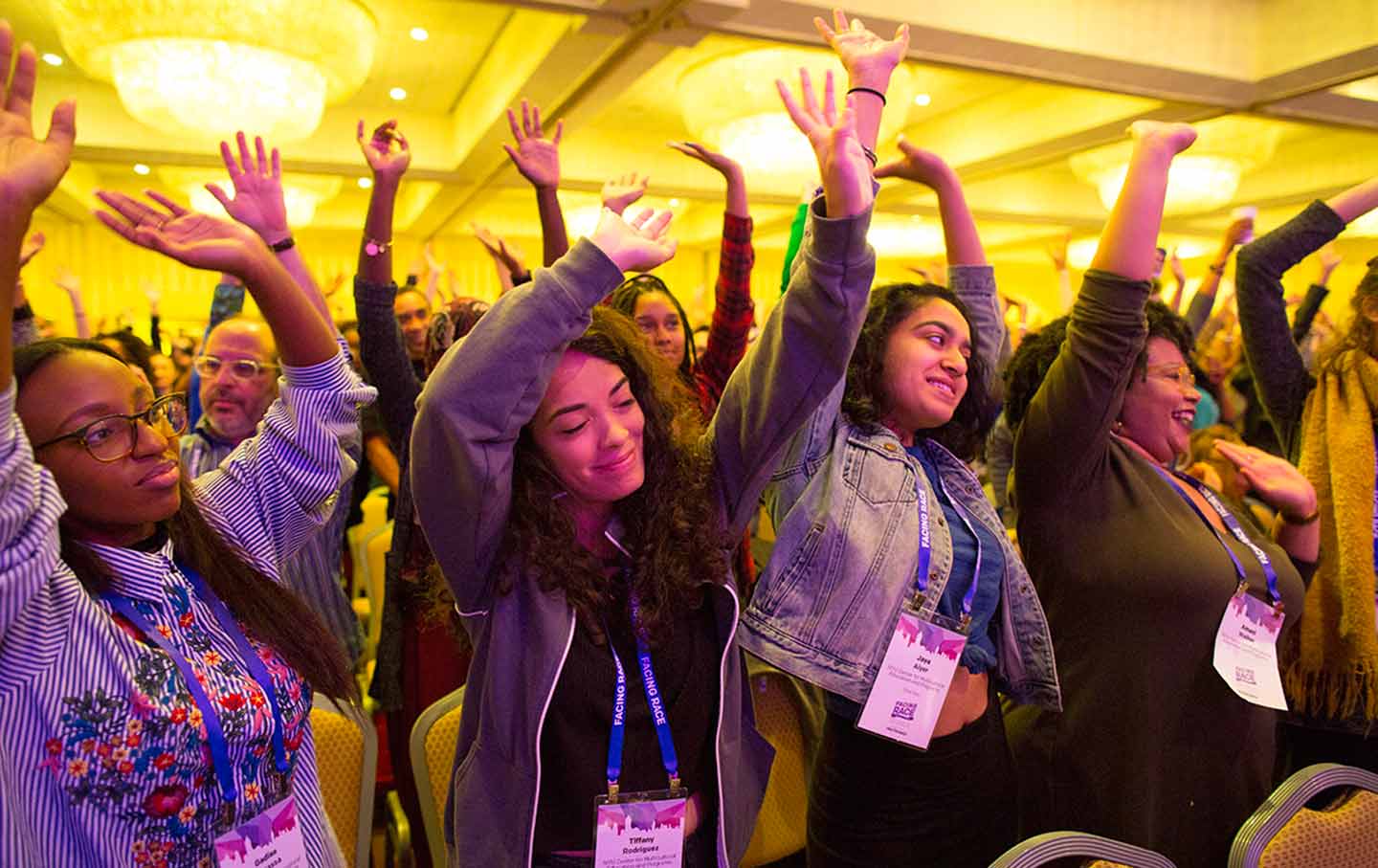 I was so lucky last week. Two days after the election, 2,300 hundred racial justice activists of all colors arrived in Atlanta at the Facing Race conference, which my organization Race Forward hosts. They were shaken, grieving, and scared. We held each other through the immediate aftermath of an election that most of us didn’t think could turn out as it did. That holding made it possible for us to see through our panic to the opportunities and the work ahead.

This election cycle revealed the depth of the backlash against the progress of all our social justice movements. I know that it feels shocking to many people, so soon after electing our first black president. It’s quite easy to rest complacently on the things we’ve already won. But social change isn’t a linear process in which the trajectory goes consistently up. There are sideways moves, and there are dips.

This is the lowest dip I’ve experienced in my 30 years of movement work. A huge portion of the nation elected to the White House a capitalist con man, an authoritarian white supremacist, and an accused sex offender, and he has begun to appoint a cabinet of people we have good reason to fear. There are real dangers ahead; some are already manifesting, as stories of kids being told by teachers and classmates that their families are going to all be jailed or deported break my heart.

Trump has vowed to deport two to three million undocumented people, to begin a registry for Muslims, to tear up the Paris Climate Accords in the first 100 days. We need to be ready for the immediate worst—a shock-and-awe style repression for which the necessary infrastructure already exists—as well as for the degradation of civil and economic rights through legislation and the courts over the coming months and years. Many people will need protection from both the state apparatus and from vigilante violence. That includes women needing abortions or escaping sexual violence, undocumented people trying to stay with their families, Muslims, protestors and leaders of all stripes.

But we can also stay on the offensive, even as many of us shift to defense.

Our communities bring considerable maturity, creativity, organizational strength, courage, and intelligence to the grand project of achieving racial and social justice. I take so much heart, for example, from my Native American family right now. Consider what they’ve done. They had to recover from a genocide that wiped out 90 percent of their population. They have faced down centuries of isolation and exclusion, betrayal of treaties, and the notion that there weren’t any of them left. They had to rebuild their nations and hold onto their languages and culture in the face of unspeakable violence and repression. Yet they took down the Keystone Pipeline and have prevented the Dakota Access Pipeline from progressing. Their visibility and infrastructure for organizing, media, and fundraising is stronger than it was even five years ago, including the formation of the Native Organizers Alliance. If they can do all this, so can we all. So must we all. We have assets, money, relationships, experience that we didn’t have 30, 60, 90 years ago, and we need to use them now.

As I get back on social media after checking out for Facing Race, I see progressives berating each other a lot. I see so much stop—stop saying the problem was this, and not that; stop acting as if safety pins are the answer; stop refusing to acknowledge that Bernie should have been the Democratic candidate.

We cannot berate each other into better strategy. If we have better strategy, people will come. The most important word for us right now is “go.” We need to put that word in all of our social media posts, our headlines, our speeches, in our newsletters and in our art, as we direct to action the many people who are still with us, and the many more who are ripe for joining us.

Backlash only exists when we are making progress—there is no need for backlash when we aren’t. We’ve made enormous progress in small and large chunks over hundreds of years, and we have not come anywhere close to the end of that progress. In truth, we are just at the beginning. In the course of human history, a country the age of the United States is a baby. It’s a giant, angry, selfish baby, to be sure, but a baby that can grow into responsible adulthood with the pushing and pulling of our village.

I can’t lie: It was hard to leave the warmth, beauty, and love I felt at Facing Race to travel alone to Washington, DC, this week. I carry with me, though, every hug, every cute kid, every laugh (yes, we can still laugh), every piece of art, every poem, every insight. These are the things we can rely on to meet the challenges of this time, and those still ahead. Let’s go.