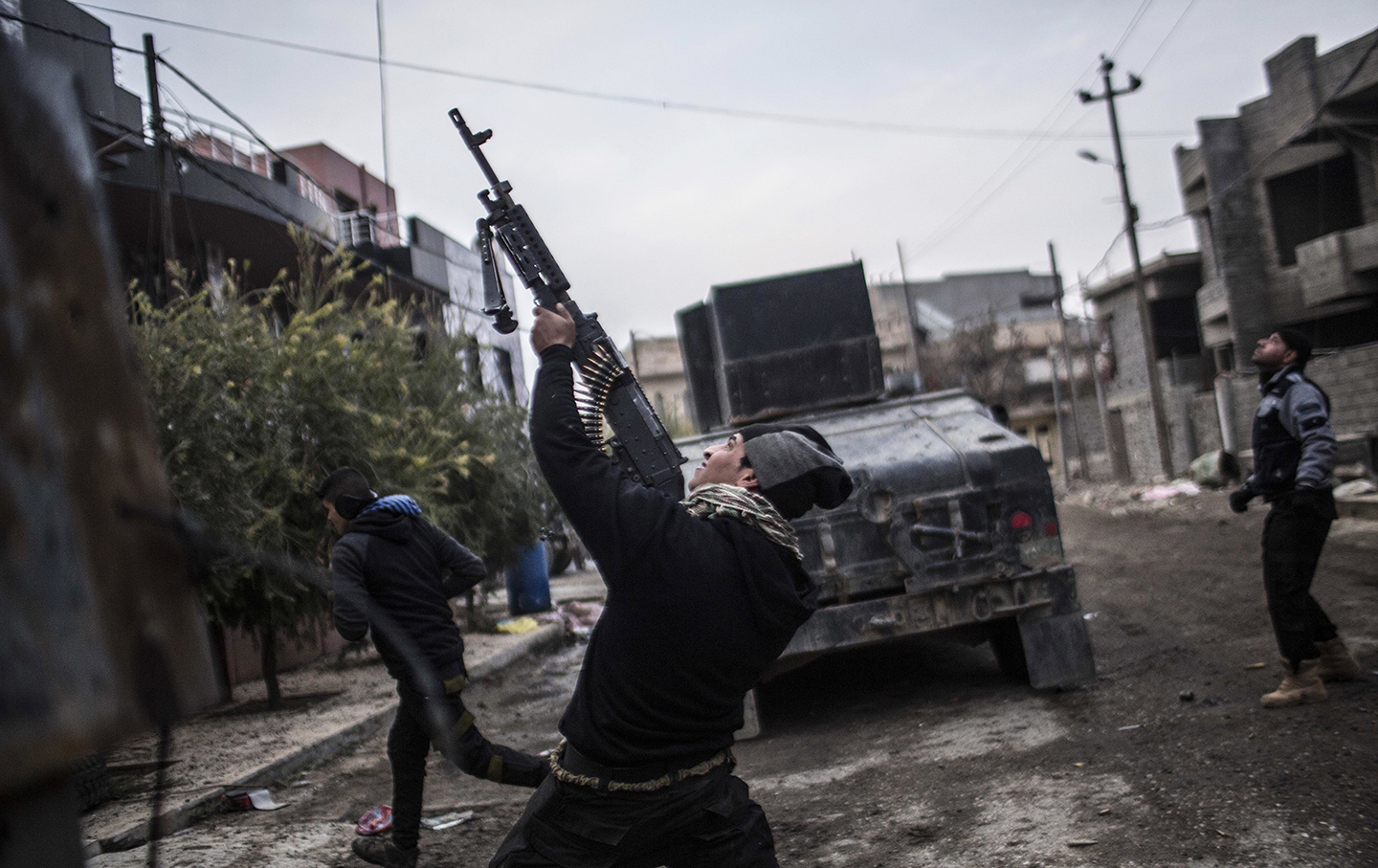 A member of the Iraqi Special Forces shoots his machine gun at an Islamic State drone in the al-Barid district in Mosul, Iraq, on Sunday, December 18, 2016. (AP Photo / Manu Brabo)

National security was the supposed motivation for President Trump’s executive order on immigration from seven Muslim-majority countries. Given that immigrants from the seven named countries have not killed a single person in a terrorist act on US soil in this century, the security argument is weak. That this executive order is instead the beginnings of a ban on Muslims and that it is part of an attempt to make Muslim Americans second-class citizens for the purposes of domestic race politics seems clear from admissions of administration insiders such as Rudy Giuliani. Ironically, however, the executive order has severe negative security implications for US foreign policy in the Fertile Crescent and Iran.1

Both Iranian leader Ali Khamenei and most American politicians saw the Joint Comprehensive Plan of Action (JCPOA), the agreement reached between the UN Security Council and Iran to limit Iranian uranium enrichment to civilian purposes, as a one-off deal that held no promises for improved Iran-US relations. Still, some Iranian reformers and some American liberals (and businessmen) entertained hopes that it could lead to a lessening of tensions between the two countries. Iran will emerge as a major new market for investors and manufacturers. Before he left office, President Obama approved the sale to Iran of 80 Boeing and 100 Airbus civilian aircraft for Iran Air’s fleet, which is dangerously aging as a result of sanctions. While the Airbus order has gone ahead, the Boeing deal may be in limbo, and is opposed by Republicans in Congress.2

Trump’s executive order on immigration, which blocked Iranians, probably ended these tentative steps toward better relations and put paid to any US corporate dreams of an Iranian bonanza. The Iranian government swiftly prohibited Americans from visiting Iran. The move helps isolate Iran and hurts reformists, youth, and women. It strengthens the hands of Iran’s hard-liners, enabling them to portray the United States as racist, with some Shiites speaking darkly of a “war on Islam.” Trump has handed Iran’s regime an enormous soft-power victory. The new tiff also ensures that the billions of dollars to be made in the Iranian economy will go to Russia, China, and any European firms willing to risk the ire of Trump’s Treasury Department. It is hard to see how Iran is disadvantaged at all by these developments. It is easy to see how the United States has lost an enormous business opportunity and has also lost the contributions to American society of the typically highly trained and energetic Iranian immigrants to this country.3

When we say “security” in that part of the world, moreover, we are nowadays saying “ISIL.” The primary allies of the United States in the fight against the brutal radicals of ISIL have been the Kurds and fighters of Shiite Muslim heritage. Trump just banned Iraqi and Syrian Kurds from coming to the United States. The United States now has some 250 Special Operations troops embedded with the Syrian Kurdish YPG militia, helping them in their effective fight against ISIL in northeastern Syria. Trump also banned citizens of the two Shiite-majority countries, Iraq and Iran. Washington has had a tacit battlefield alliance with Iran and the Iraqi militias, which it has backed in the long, hard slog against ISIL. The Iranian and Iraqi Shiite help has saved large numbers of American lives, which would have been lost if the United States had had to intervene with infantry.4

The Iraqi military is typically helmed by a Sunni minister of defense and is a national, not a sectarian force. But since the Sunni-majority provinces of Iraq had been captured by ISIL in 2014, in the nature of the case most of the Iraqi army troops are now of Shiite heritage. The army collapsed in 2014 and has been rebuilt with the help of the United States and other allies. The three Counter-Terrorism Service brigades in Special Operations have been trained by the United States and have been at the vanguard in retaking Iraqi cities such as Ramadi, Fallujah, and now Mosul from ISIL (Baghdad now has East Mosul and is in striking distance of taking all ISIL territory in Iraq this spring).  5

Iraqi militias fighting ISIS have now called for a ban on travel of US citizens to Iraq.

In 2014 President Obama reestablished an Iraq command, and over time sent some 4,000-5,000 US troops to help with training, strategy, and even targeting, with some US forces positioned not far from the front. In the past year, the number of civilian Pentagon contractors supporting these troops has grown to about 2,000. The State Department and other US agencies in that country employ another 5,000 contractors.6

A lot of heavy lifting has been done, however, by the Popular Mobilization Forces, the Shiite militias that have been recognized by the Iraqi parliament as a sort of national guard. Unlike the army, these groups often adhere to a religious hard line, and several of the more important of them are backed by Iran. Washington has, despite occasional denials or obfuscations, given the PMF air support at some points in the fight against ISIL, and arguably that terrorist organization would still control most of Iraq and still pose a much bigger threat to Europe and the United States were it not for these militias.7

One immediate impact of Trump’s immigration decree, which excludes Iraqis, was that the PMF groups jointly and immediately called for a ban on the travel of US citizens to Iraq and the expulsion of Americans now present in that country. Iraqi parliamentarians immediately took up this call as well. Given the country’s dependence on the US military, it is unlikely that Prime Minister Haider al-Abadi will heed these calls. Still, for US troops and contractors to have to work in an angry and hostile environment in Iraq benefits only ISIL. To any extent that the United States has been in competition for the affections of Baghdad with Iran, it has just walked away from the triangle and relinquished Iraq to Iran as its sphere of influence.8

Trump’s executive order helps ISIL in another way. Muslim radicals such as ISIL have long sought to polarize the world between militant imperialist Westerners and militant Muslims, and have been frustrated by how few of the world’s 1.5 billion Muslims have been interested in joining their radical, violent struggle. They call the overlap between peoples with a Christian heritage and those with a Muslim one the “gray zone,” and brutal if ephemeral terrorist attacks like those launched in Paris and Brussels last year are intended to reduce the size of that zone. They are hoping to get Christians to set upon Muslims and drive the latter into the arms of the radicals. Trump just damaged the US alliance with ISIL’s enemies and handed ISIL a huge propaganda victory. So that is how his executive order on immigration affects national security.9