Donald Trump poses beside a copy of his book, Trump: The Art of the Comeback, November 7, 1997. (AP Photo / Emile Wamsteker)

The Senate passed a budget resolution Thursday night that paves the way for a gargantuan $1.5 trillion tax cut. In a broad sense, the Republican tax plan is a massive heist: a historical upward redistribution of wealth that would benefit corporations and very rich Americans at the expense of many domestic spending priorities.

But on a smaller scale, the tax plan is also more standard, grubby-type graft, because passing it will give President Trump and the members of his administration billions of dollars. Trump’s cabinet already has more wealth than the combined wealth of one-third of Americans, and so, naturally, it will reap the rewards of a tax plan aimed at helping the already rich.

A partial analysis of of Trump cabinet members’ finances and the GOP tax plan released this week by the Center for American Progress Action Fund found that by eliminating the estate tax alone Trump and his cabinet would save over $3.5 billion. Trump, Betsy DeVos, and Jared Kushner would save many millions more thanks to the GOP tax plan’s pass-through corporation provisions.

Under current law, estate tax is collected from individuals worth $5.5 million or more, or couples worth $11 million or more. That applies to only 0.2 percent of Americans, though it applies to exactly half of Trump’s cabinet—11 of 22 members, plus the president himself. By eliminating the estate tax, as the GOP plan does, Trump and his cabinet would make $3.556 billion dollars, according to CAP: 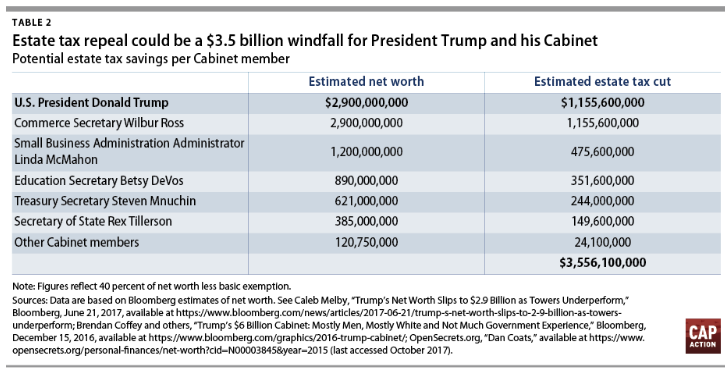 The GOP tax bill also would cap “pass-through income” at 25 percent. Many businesses utilize pass-through entities like Limited Liability Corporations or sole proprietorships for tax purposes, and currently that income is taxed as low as 10 percent or as high as 39.6 percent, depending on how much the business earns. The Trump-McConnell-Ryan tax plan would cap that tax rate at 25 percent. Eighty-six percent of taxpayers with pass-through income are already taxed at that rate or lower, so once again top earners get the benefit.

That includes some notable Trump cabinet members. Education Secretary Betsy DeVos disclosed between $20.5 and $33.8 million in pass-through income in 2016, and so would get between $3 million and $5 million annually if the GOP tax plan becomes law, according to CAP. Jared Kushner, the president’s son-in-law and his senior White House adviser, disclosed $118 million in pass-through and would make $17 million annually.

The biggest winner would be the president himself. The Trump Corporation—which he, very notably, has not divested from—is one big tangle of LLCs, S-corps, and other pass-through entities. In 2016, Trump said in his financial-disclosure forms that he earned $150 million from these businesses. That would get him a $23 million prize for passing just this particular provision of his tax plan, on top of the $1.15 billion tax cut his family would receive from ending the estate tax.

Democratic senators seized on the CAP report this week as the legislative process began. “The rich are getting richer and richer and working families are scraping to pay for housing and schools and child care. It is just plain immoral to slash taxes for the rich while sticking it to everyone else,” said Senator Elizabeth Warren outside the US Capitol on Wednesday. “This is about who government works for. Democrats believe that government should work for working families, not for gazillionares like Betsy DeVos or other members of the Trump cabinet who already have it made.”

Why the Left Needs to Change How It Fights