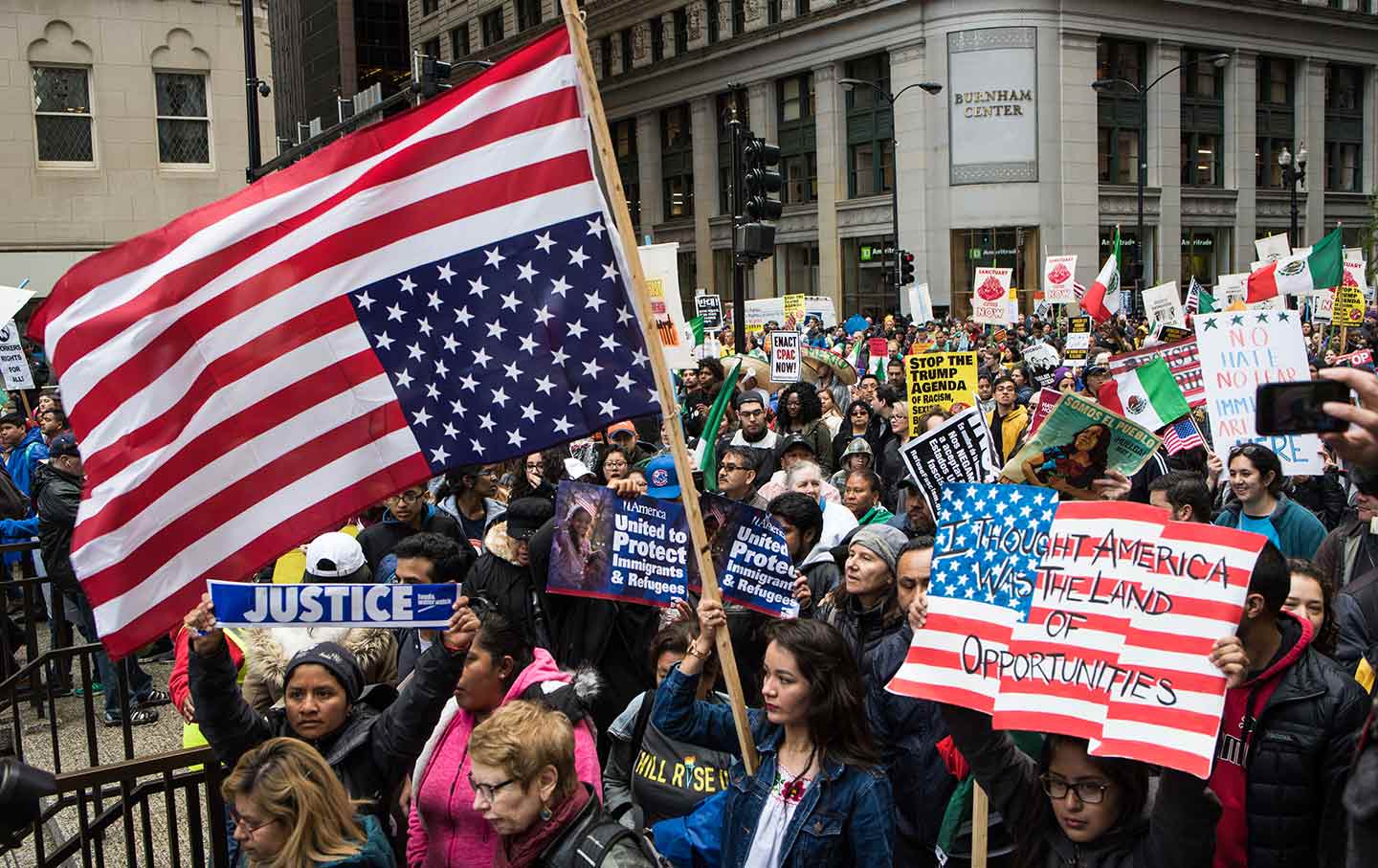 Protesters demonstrate during a 2017 May Day march in Chicago. (Max Herman / Sipa via AP Images)

Donald Trump is the most anti-worker, anti-labor president since Calvin Coolidge. That should not come as a surprise. Trump ran in 2016 on a militantly anti-union Republican platform, and he has for the most part kept the promises of a party that long ago abandoned any pretense of representing the American working class.

Because candidate Trump criticized noxious free-trade agreements that Democratic and Republican presidents have advanced, there were many workers who imagined he was on their side. Some still do.

But Trump will not deliver for working people on this or any other Labor Day. He has made that plain by assembling an administration that is packed with political grifters who have made it their business to defend sweatshops, depress wages and tip every balance toward multi-national corporations.

In many cases, Trump’s picks are worse than Trump—and that’s saying a lot.

“How can Americans trust you will protect workers rights when you’ve spent 40 years fighting against them?” —Elizabeth Warren

Trump’s National Labor Relations Board picks—Marvin Kaplan and William Emanuel—have been greeted with scorn by advocates for a living wage and workplace fairness. As Massachusetts Senator Elizabeth Warren explained to Emanuel during his confirmation hearing: “You have spent your career at one of the country’s most ruthless, union-busting law firms in the country. How can Americans trust you will protect workers rights when you’ve spent 40 years fighting against them?”

Trump’s Secretary of Labor, Alexander Acosta, has a miserable history of aligning with right-wing and corporate interests. After law school, Acosta clerked for US Court of Appeals for the Third Circuit Judge Samuel Alito. Alito is now the US Supreme Court’s aggressive foe of worker rights. Acosta, who served briefly as a George W. Bush appointee to the National Labor Relations Board, went on to face harsh criticism for the partisanship he displayed on voting rights cases while leading the US Department of Justice’s Civil Rights Division.

As Labor Secretary, Acosta has remained on the wrong side. Just weeks ago, he appeared before the annual gathering of the militantly anti-labor American Legislative Exchange Council—along with anti-union zealot Betsy DeVos, Trump’s secretary of education.

Trump’s pick to serve as deputy secretary of labor, Patrick Pizzella, has an even more troubling record than Acosta. A former campaign staffer for Ronald Reagan who has served in Republican and Democratic administrations, Pizzella was once employed by the viscerally anti-union National Right to Work Committee and later joined the firm that scandal-plagued lobbyist Jack Abramoff was associated with before his 2006 conviction on federal charges that included attempted bribery.

When Alaska Republican Senator Frank Murkowski proposed legislation to raise wages for workers in the Northern Mariana Islands, a US territory that corporations used to get a “Made in the USA” label on sweatshop products, Pizzella lobbied on behalf of the folks who wanted to build an economy on sweatshop wages.

Senator Al Franken, D-Minnesota, grilled Pizzella about his anti-worker lobbying and the best the Trump nominee could respond with was: “I was not one of Abramoff’s colleagues who was convicted.”

True, but he did do Abramoff’s dirty work when it came protecting oppressed workers. And the prospect that Pizzella will now do Donald Trump’s dirty work at the Department of Labor tells you everything you know about this anti-union, anti-worker presidency.