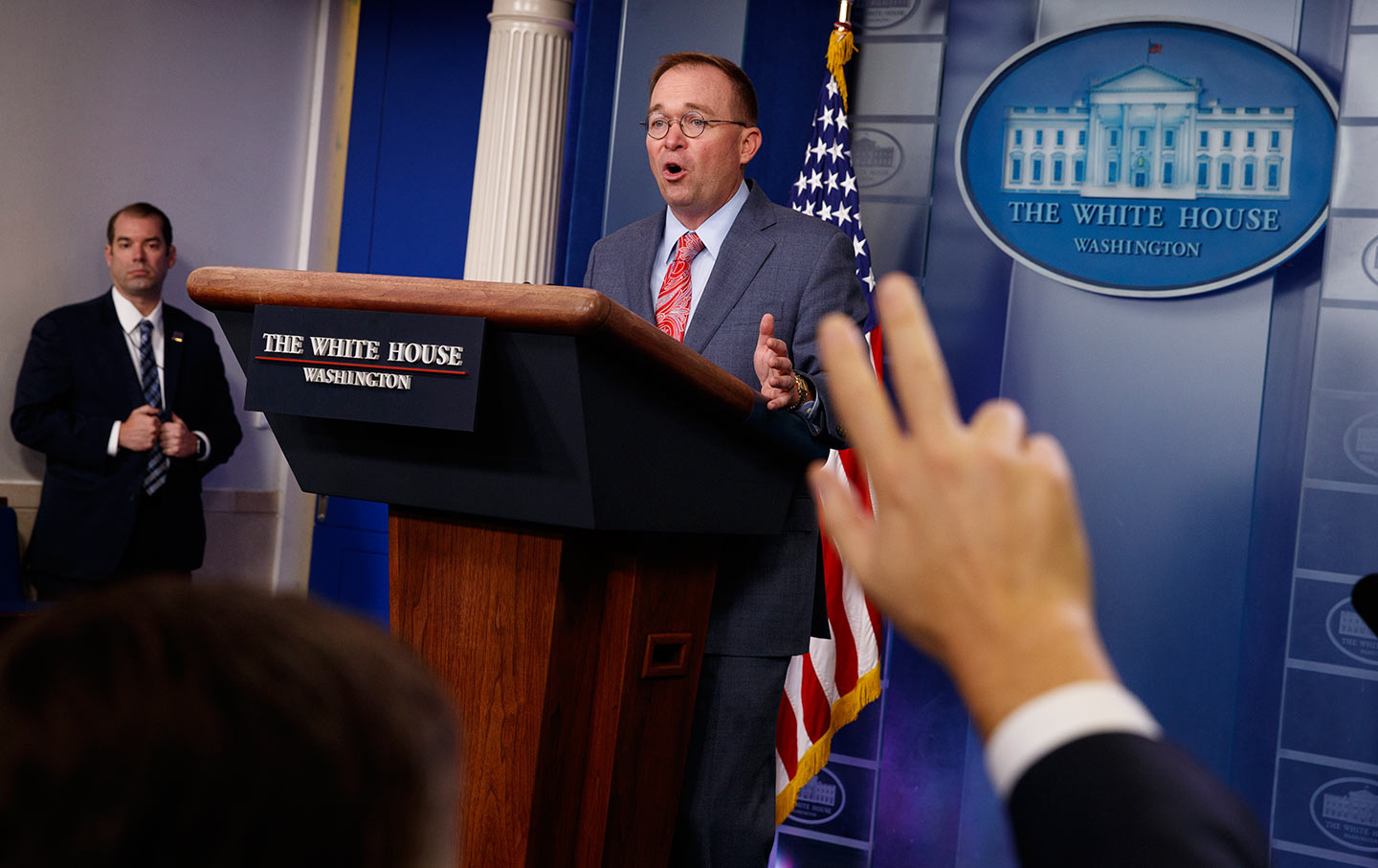 I’ve predicted it often: As Donald Trump goes down, he’s taking a lot of people with him. Fittingly, that includes the thugs and/or toadies who’ve stuck with the president even as his administration has cycled through more top personnel than any in modern history. It makes sense that those who stick around the narcissist in chief are men who are better at ass-kissing than doing their actual jobs. But at some point, incompetence and/or corruption will take their toll. And over the weekend it became clear that’s happening, quickly, to Trump’s personal lawyer Rudy Giuliani, acting Chief of Staff Mick Mulvaney, and Secretary of State Mike Pompeo.

Giuliani, of course, doesn’t technically work for the administration, but with his interventions in Ukraine and other scandals, he and Trump have blurred the lines of public and private. Weeks ago, we learned that Attorney General William Barr was miffed to hear that Trump lumped him with Giuliani as one of the people Ukrainian officials were expected to cooperate with in investigating Democrats, before Trump would come through with political and military support that the new president, Volodymyr Zelensky, badly needed. This weekend, the Justice Department struck back against Trump’s grifting lawyer, with a statement announcing that its attorneys would never have met with Giuliani to discuss one of his clients had they known that two of his “associates”—Ukrainian Americans Lev Parnas and Igor Frumon—were under investigation by the Southern District of New York for, among other things, funneling foreign cash to Republicans. (They were indicted two weeks ago.)

Legal experts told The New York Times that such a statement by the Justice Department was remarkable. “This is an incredibly unusual statement from the Justice Department, which does not comment on ongoing investigations or even acknowledge them, and it’s the kind of statement that would give clients pause about who is representing them,” Joyce Vance, a former federal prosecutor, told the paper. The Times, The Wall Street Journal, and other news outlets have reported that Giuliani himself is being probed by SDNY, but the Justice Department refuses to comment on that. Still, drawing what the Times called “bright lines” around the way the department intends to deal with Giuliani will surely undercut his ability to represent clients under federal investigation—which seem to make up the bulk of his workload.

In related news, the Journal uncovered a trove of incriminating photos from Parnas’s private Instagram account, which show him cavorting not only with Trump and Giuliani—in private planes and European capitals—but also with Trump lawyer John Dowd. On the day after Barr released his four-page misrepresentation of Robert Mueller’s report, wrongly exonerating the president, Parnas posted a photo of himself with Dowd and Giuliani at Trump’s Washington hotel, with the caption: “Congratulations Team Trump !!! Job well done !!! Even during our celebration dinner everybody hard at work !!! #Trump2020.”

Dowd had already essentially identified Fruman and Parnas as part of Trump’s legal team in a letter to House Democrats, writing that the two nonlawyers “assisted Mr. Giuliani in connection with his representation of President Trump.” But the globe-hopping photos, from multiple trips to Trump properties, show how embedded these two accused felons were in Trumpworld.

Then there’s poor, dumb Mick Mulvaney. He’s stuck trying to deny saying what he indeed said, in front of dozens of reporters, on camera last Thursday: that Trump held back Ukrainian aid until the country’s leaders cooperated in investigating the debunked conspiracy theory that Ukraine—not Russia—had something to do with the hack of the Democratic National Committee’s servers in 2016. On Fox News Sunday, Chris Wallace wasn’t having it, continuing to play the tape of Mulvaney saying what he insisted he hadn’t said, while the chief of staff blamed the media. He made matters worse by trying to explain away Trump’s now-canceled choice of his own Doral property to host the G-7, saying, “At the end of the day, he still considers himself to be in the hospitality business.” Wallace was incredulous: “I just have to pick up: You say he considers himself in the hospitality business? He’s the president of the United States.”

Things are not quite as dire for Mike Pompeo, but they’re getting worse. He’s already under fire by career State Department leaders for siding with Trump against his own diplomatic officials. The Ukraine scandal has prompted more resignations, along with some key State Department figures defying Pompeo and the administration and agreeing to testify about Trump’s pressure on Zelensky in the House impeachment inquiry. On Sunday, Pompeo did almost as bad a job as Mulvaney in handling the embattled chief of staff’s mess, telling ABC’s George Stephanopoulos, “I’m not going to get into hypotheticals and secondary things based on what someone else has said.”

Stephanopoulos pushed back: “Except it’s not a hypothetical.” Pompeo thought he’d get smart: “George, you just said, ‘If this happened.’ That is, by definition, a hypothetical.” But when the anchor insisted, “The chief of staff said it did,” there followed a five-second pause so uncomfortable that Pompeo literally appeared to sweat, before weakly resuming his “it’s a hypothetical” defense.

We know how much Trump watches television, and we know he couldn’t have been happy with what he saw from these two “leaders.” On the other hand, it’s hard to know where he’d come up with replacements for either one—whether anyone would take the job, or, in Pompeo’s case, how he would get a new secretary of state confirmed. Apparently, there’s already widespread unhappiness with the hapless Mulvaney, but given the impeachment inquiry, White House officials have reportedly decided it would be impossible to find anyone else to step in at this point.

Giuliani, meanwhile, has seemed untouchable, unpopular with many White House officials yet protected by the president. But given the steady accumulation of bad Rudy news, one of these days Trump will have to cut him loose—unless they go down together first. It would all be comical if it wasn’t so dangerous to the country.