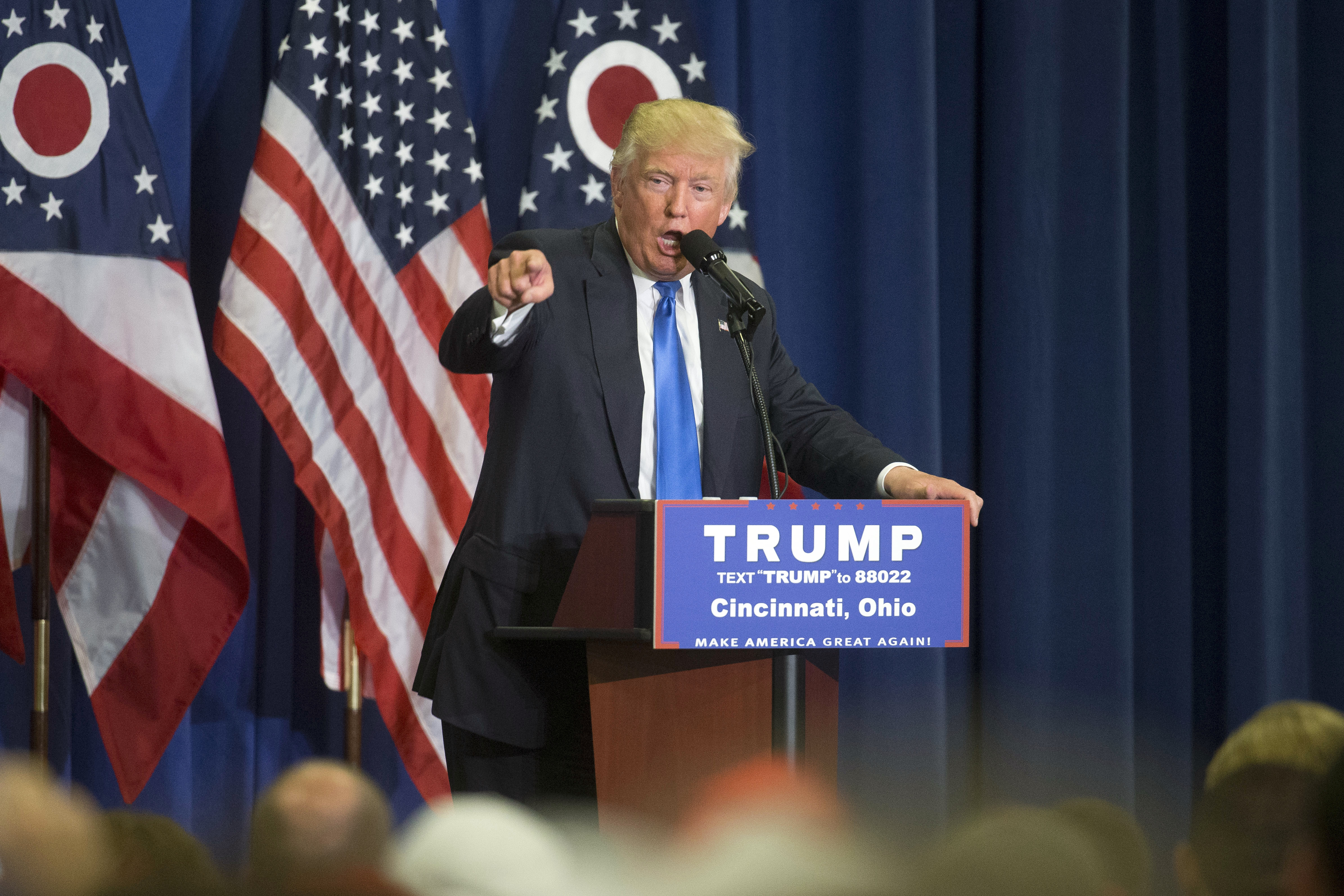 Donald Trump ought to be having a great week. The news media are acting as though FBI director James Comey virtually disqualified Hillary Clinton for the presidency because of her “careless” e-mail practices at the State Department, though in fact he declined to recommend charges against her. GOP House Speaker Paul Ryan is getting ready to pre-impeach her. Comey sat in the House Intelligence Committee hot seat Thursday, to be grilled by Republicans convinced the Republican career prosecutor pulled his punches for political reasons. Attorney General Loretta Lynch is expected to follow him. Republicans believe this has been a gift to a party saddled with a nominee who can’t pull its leaders together; one thing every camp in the GOP agrees on is that Clinton should be stopped, by virtually any means necessary.

But Trump just can’t help himself: As the controversy over his Twitter use of a Star of David to connote Clinton’s corruption last weekend was finally subsiding, the presumptive nominee revived it Wednesday night in a speech The New York Times called “defiant,” “rambling,” and “manic-sounding.” I’d go with “deranged.” He also reiterated his admiration for the way the late, deposed Iraqi leader Saddam Hussein brutalized “terrorists” when he ran the country.

The narcissistic mogul even humiliated his Orthodox Jewish son-in-law, Jared Kushner, who wrote an op-ed arguing that the unfortunate image represented “careless” work by staffers, and insisting that the grandfather of his Jewish children was no anti-Semite. But Trump dismissed Kushner’s near-apology and insisted that he wanted the staff to keep the image up.

“‘You shouldn’t have taken it down,’” Trump said he told a staffer. “I said, ‘Too bad, you should have left it up.’ I would have rather defended it.” It’s the media that have the race problem, Trump claimed. “They’re racially profiling, they’re profiling, not us,” he said, echoing a favorite complaint of white-supremacist groups that insist that people who call out racism are the real racists. Of course Trump wasn’t going to apologize—just last week he told conservative radio host Howie Carr an ill-advised apology is why sportscaster Jimmy the Greek got in trouble for racial slurs—it was the apology, in Trump world, not saying that African Americans were natural athletes, “bred” for advantage during the age of slavery and now “they’ve got everything” and soon “there’s not going to be anything left for the white people.” If he’d powered through the outrage, he’d have been fine.

Let’s remember that Trump’s own social-media director has admitted the image originally appeared on the Twitter page of a white-supremacist supporter with the screen name @fishbonehead1, according to The Daily Beast’s Gideon Resnick. (The page was a sewer of racist and anti-Semitic garbage before it was either suspended or taken down.) From there the image made it to the swamps of 8chan, where neo-Nazis and other trash have lately been celebrating the death of Holocaust survivor Elie Wiesel. Far from being a sheriff’s star, or an innocent image that resembles one in a Frozen coloring book, as Trump claimed Wednesday, the Star of David was deliberately placed against a backdrop of dollar bills framing Hillary Clinton, an obvious allusion to the neo-Nazi belief that rich Jews control politics and the media.

Trump’s refusal to apologize or explain away the use of an image created and disseminated by neo-Nazis and white supremacists is just another example of the way he won’t firmly rebuke his racist, anti-Semitic supporters. In April, he pretended not to know who David Duke is, though video existed of him discussing and criticizing Duke in years gone by. (Duke, for the record, says the image Trump used is definitely a Star of David, and he’s impressed.) In January, Trump retweeted a message by someone with the handle @whitegenocide1; Fortune magazine later found that Trump had tweeted or retweeted at least 75 users who follow the top 3 #whitegenocide “influencers.” In May his campaign submitted a white supremacist as a potential Trump delegate in California (he was removed). The 16 candidates Trump defeated had a lot of campaign problems —but having to disavow or explain the support of the alt-right fringe wasn’t one of him.

And now Trump is insisting this was just an innocent star—perhaps a sheriff’s star, or a star his young son Barron might have drawn (“I never said, ‘That’s the Star of David, Barron, don’t!’”) Thus was the media cast in the role of angry parent, clipping Trump’s wings, infringing on his creativity, his right to use any star he chooses—despite the identity of the white-supremacist whackjob who actually propagated the image. But Trump is so narcissistic, and so fragile, he can’t take rebuke—he is little Barron who “loves to draw stars,” and how dare we tell him what kind of stars to draw!

Most of the media reacted appropriately, with shock, at Trump’s rambling, angry defense of his campaign’s screwup (to put it charitably). But a few pundits thought Trump was turning his campaign back around. On MSNBC’s Morning Joe, frequent Trump defender Mark Halperin called the wild speech “vintage Trump,” and suggested this is how he will return to his winning ways.

I don’t think so—and neither do most Republican leaders, it seems. On Wednesday, Senators Bob Corker and Joni Ernst took themselves out of consideration for the vice presidential slot, and the scandal-dogged former House Speaker Newt Gingrich emerged as one of the few remaining leaders being vetted to be VP. Gingrich introduced Trump before his off-the-rails speech Wednesday night, reportedly as an effort to test out the chemistry of a Trump-Gingrich ticket. We saw the chemistry, all right: Trump exploded and blew away the impact of even the bombastic Gingrich. When the dutiful crowd chanted “Gingrich,” as they were primed to do, Trump ignored them. He was on a roll, and even his adoring supporters couldn’t stop him.

Wednesday night made one fact clear, again: Republicans and reporters waiting for a Trump “pivot” to seriousness and substance will be waiting forever. Little Donald is going to draw any kind of star he wants, for as long as he wants.

That Will Show Us!