Donald Trump during a rally in Roanoke, Virginia, on September 24, 2016.

When the second presidential debate managed to take brief forays into actual policy, Donald Trump was eager to talk about his tax policy. Specifically, he wanted people to know that he favored eliminating a tax break that favors wealthy Americans, and Hillary Clinton didn’t:

That’s wrong for a few reasons. Clinton does favor eliminating the carried-interest tax loophole, and has even said she would unilaterally ask the Treasury Department to close it.

But Trump is also performing a sleight of hand on the carried interest provision. It’s true, he would close the loophole, which allows investment income to be taxed at a lower rate (23 percent at the top level) than regular income (with a top rate of 39.3 percent). This allows Trump to pretend that he would stop the wealthy from paying a lower rate on their Wall Street profits than, say, a coal miner might pay on his wages.

The reality, however, is much more complicated. Trump’s revised tax plan, which the Tax Policy Center analyzed this week, would cut business tax rates to 15 percent. This would allow hedge funds and private-equity partnerships, which make most of their money from carried interest, to continue to pay a lower rate than regular wage earners—lower even that what they pay now. Trump’s plan also allow owners of S-corporations, partnerships, and sole proprietorships to elect to pay a 15 percent business tax rate instead of personal income-tax rates. These vehicles are very popular among the wealthy. In the end, if you’re making money on carried interest, you do better under Trump’s proposed tax plans than you do now.

This switcheroo is but one example of Trump’s larger scam: Wwhile portraying himself as a friend of the little guy (“I consider myself in a certain way to be a blue collar worker,” he said last week in Pennsylvania), his tax plan showers the wealthy with tax benefits. The TPC analysis found that while Trump cuts taxes at every income level, the biggest benefits by far go to very top earners. People with incomes over $3.7 million, which is 0.1 percent of taxpayers, would get a $1.4 million tax cut—-that’s 14 percent of their income. The poorest fifth of taxpayers, by comparison, would get a tax cut that’s just 0.4 percent of their income. 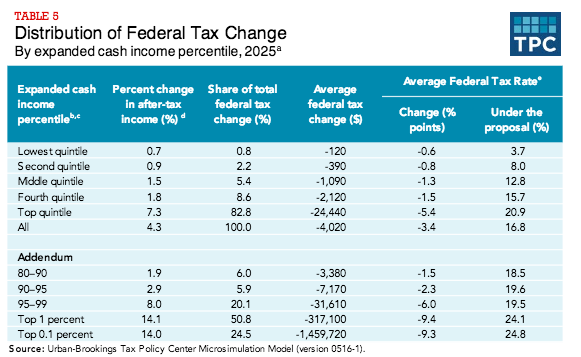 The TPC analysis also found that for all of Trump’s bluster about the national debt, his tax plan would blow an enormous hole in the federal budget. Federal debt would rise by $7.2 trillion in the first decade of his plan, and by $20.9 trillion by 2036.

The TPC analysis is damning, and so you can guess how Trump responded. Not by ignoring it, or providing more details, but attacking the TPC as “deeply biased,” and by declaring without evidence that the Trump plan is actually revenue neutral. The statement also said that Clinton’s tax plan “as revealed by WikiLeaks” is “open borders, open trade,” which has nothing to do with taxes.