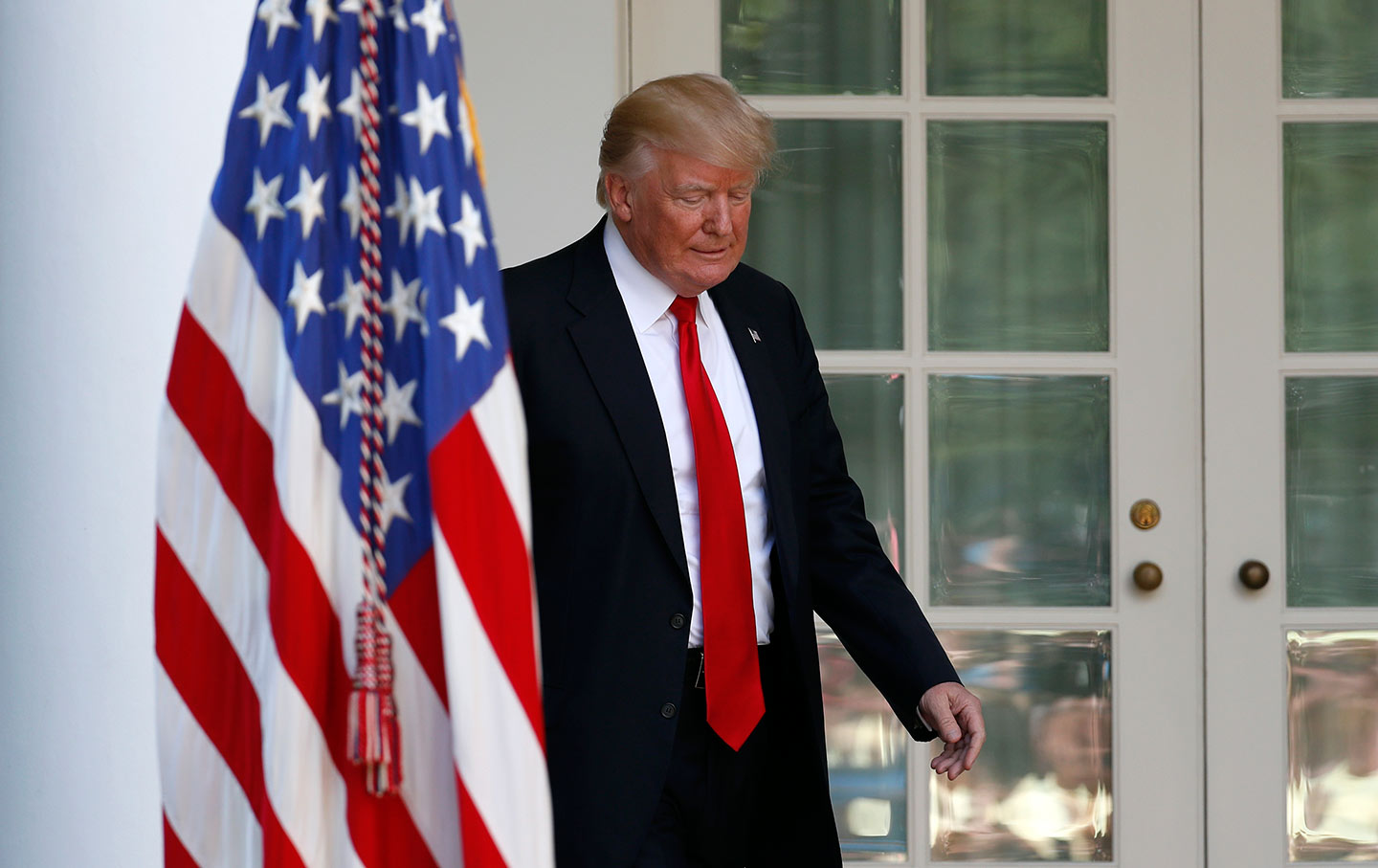 Doug Jones’s improbable victory Tuesday night has set Republicans at each other’s throats, amid the growing impression that their reign in Washington will soon collapse. But it’s worth remembering the dubious narrative that Democrats would be the ones at loggerheads under Trump. The 10 Senate Democrats up for reelection in 2018 in states Trump won would break with the party and infuriate the resistance, while Trump rung up populist victories on bipartisan priorities like infrastructure. That was really a theory out there.

Of course, the populist rhetoric was revealed as a sham, the infrastructure bill still doesn’t exist, and Trump has so relentlessly poisoned the well that Democrats have held together, almost unilaterally, on every major issue. But far from the spotlight, one Trump appointee didn’t get the memo that he was supposed to sell out entirely to business interests. The situation hasn’t resolved itself enough to get Democrats to collaborate with Trump. But the corporate lobbyists are the ones getting nervous.

That’s the fascinating backdrop to negotiations over NAFTA, the decades-old trade agreement with Canada and Mexico. Talks are being held this week in Washington. Trump rode criticism of NAFTA as a job-killing machine to victory in the industrial Midwest. He then watched as companies like Carrier went ahead and outsourced jobs anyway. But Trump’s trade representative, Robert Lighthizer, is breaking with decades of orthodoxy in challenging the trade status quo, hewing as much toward labor’s vision of a good agreement as toward what business prefers.

Just before yesterday’s national day of action on NAFTA, Lori Wallach of Public Citizen’s Global Trade Watch put the negotiations into three buckets. In the first were Lighthizer proposals that mirrored long-standing demands of NAFTA critics.

This includes a way for countries to opt out of the destructive investor-state dispute settlement (ISDS) scheme, where companies can sue governments for lost expected profits from changed regulations. The US proposal wouldn’t eliminate ISDS, but would let countries leave the system, and would throw out the worst aspects of the process. Lighthizer also wants to strengthen “Buy America” procurement mandates; increase the “rule of origin” for automobiles, so 85 percent of a car is made in NAFTA countries and half in the United States; and initiate a mandatory sunset and review of NAFTA every five years.

The second bucket includes things where Lighthizer has made promises without actual substance, like on stronger labor and environmental standards. Now, the Trump administration doesn’t support stronger labor and environmental standards in the United States, let alone in a trade agreement. So far, Lighthizer has only proposed the language from the Trans-Pacific Partnership, which is wholly inadequate. But he has reportedly listened to the AFL-CIO’s concepts for how to improve those rules. Lighthizer does seem to recognize that US manufacturers cannot compete with Mexico if fake unions conspire with business to hold down wages. After NAFTA, real wages in Mexico actually fell, and they are today as low as one-twentieth of their US counterparts.

The third bucket features a series of corporate sellouts, where industries have won concessions from Lighthizer. The damaging TPP chapter on intellectual property has been introduced, which would increase prices on medications by lengthening patent exclusivity, and aggressively enforce copyright of music and movie content. (If this is enacted, borrowing a friend’s CD could be a trade violation.) The tech industry is trying to maintain its dominance by writing into NAFTA that virtually no limits can be placed on data, whether for privacy or security reasons. And the financial-services industry wants to force deregulation by setting limits on rules through the agreement.

So it’s a mixed bag. But the interesting part of this is how the outside actors are responding. In the day of action, NAFTA opponents pressured the Trump administration to get the best possible deal. “The renegotiation of NAFTA must stop providing incentives for corporations to outsource American jobs to Mexico,” said Senator Bernie Sanders at a rally Wednesday. The key point is that opponents are assuming a negotiation and trying to get the best possible deal.

The corporate lobby, on the other hand, is trying to shut down the process, imploring Canada and Mexico to refuse to engage. “Their theory is that ultimately the administration will back off on what they’re revising, and they will get what they want: adding TPP to NAFTA,” said Lori Wallach. Indeed, Canada and Mexico have dismissed the five-year sunset clause and treated other US proposals as too stupid to even address. Mexico offered a couple counter-proposals last month, suggesting that the stone wall is starting to crack. But Lighthizer said after that round of talks that “we have seen no evidence that Canada or Mexico are willing to seriously engage on provisions that will lead to a rebalanced agreement. Absent rebalancing, we will not reach a satisfactory result.”

That’s code for pulling out of NAFTA. The corporate types seem to think that’s impossible, and certainly there would be legal challenges to a unilateral pullout. But Wallach cited the NAFTA text, which says that, “during any period in which a country ceases to be a NAFTA country,” the implementing provisions “shall cease to have effect.” Indeed, Trump would likely get credit from his base by terminating NAFTA, and hasn’t shown much interest in the law hindering his decisions. “He has the cards,” Wallach said.

So what’s stopping Trump? Lighthizer knows that, while ending NAFTA would remove some incentives to outsource, the only way to revitalize US manufacturing is by negotiating a superior deal. “If Trump really wants to deliver on his promises, he needs to do a new agreement that gets the benefits of trade without outsourcing,” Wallach said.

That’s what makes the positions of the major players so odd. The allegedly “protectionist” Trump administration and NAFTA critics want a new trade agreement. The corporate types, by giving NAFTA partners bad advice, are effectively pushing to eliminate the deal. The tipping point probably comes with the next high-level round of talks in Canada in January. If the stonewalling continues, Trump will likely give the six months’ notice required prior to withdrawal. So the corporate paragons of free trade are the ones paving the way to a NAFTA exit.

Among other things, that would really damage Canada and Mexico, given their trade surpluses and reliance on the United States as a trade partner. Mexico is scrambling, looking to sign an EU trade agreement to soften the blow. But the US market is critical to their future. Will they let auto executives drag them into a disastrous outcome?

The situation is fluid, and there are still enough corporate goodies in the deal for liberal trade reformers to fight for improvements. But it’s the corporate lobby, which loves the status quo of paying two bucks an hour for Mexican labor and spilling toxics wherever it pleases, that is threatening the agreement. Let’s never hear again about who the real “obstructionists” are to free trade.