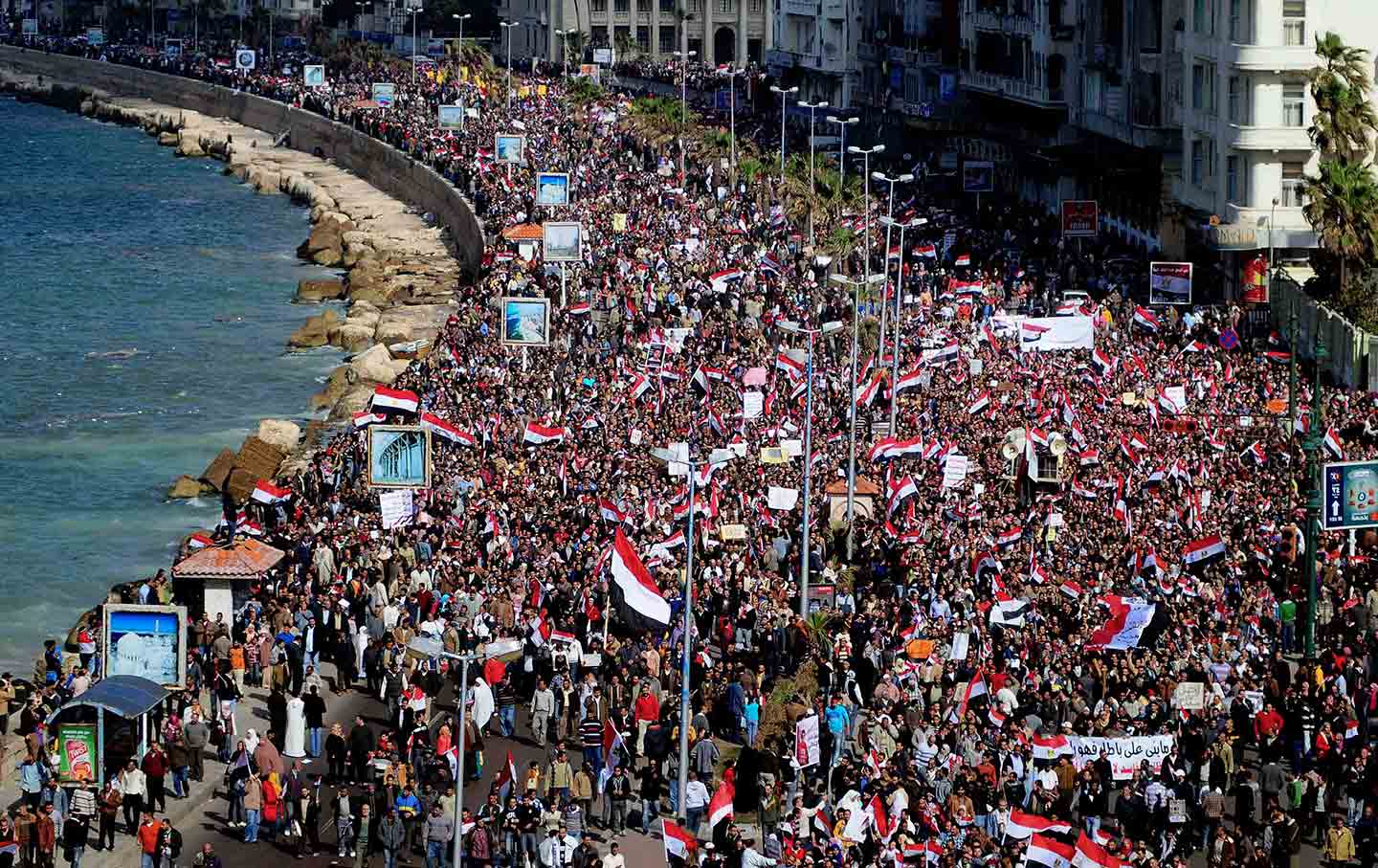 Mohamed Adel walked out of an Egyptian prison in January after spending over 1,000 days in solitary confinement.1

His grueling prison sentence may finally be over, but the 28-year-old activist is by no means a free man. For the next three years, he will be forced to spend every night locked up in a police station for 12 hours, in what human-rights advocates and attorneys say amounts to an unprecedented form of punishment for political prisoners.2

Adel was a founding member of the April 6 Youth Movement, a grassroots opposition group at the forefront of the 2011 uprising that forced president Hosni Mubarak out of office after 30 years in power. In December 2013, he was sentenced—along with April 6 co-founder Ahmed Maher and activist Ahmed Douma—to three years in jail on charges of violating Egypt’s protest law, a draconian piece of legislation that has been used to lock up thousands of dissidents.3

“It was tough psychologically; you are cut off from the world.” —Mohamed Adel on his imprisonment

As a high-profile political detainee, Adel was kept in isolation. He spent most of his sentence locked up alone in his cell for 22 hours a day. During his two hours outside, other detainees were warned not to converse with him. On prison visits, several intelligence officials would sit with the family and record every word of their conversation.4

“It was tough psychologically; you are cut off from the world,” Adel said in a phone interview with The Nation from his home. “You have good days and bad days.”5

On January 22, he was released after serving his full three-year term. Yet his sentence includes an additional three years of probation, and authorities are making full use of Egypt’s penal code to keep him locked up for half that period, effectively extending his time in detention for another year and a half and ruining his ability to live a normal life.6

For the entire three-year probationary period, Adel has to turn himself in to his local police station every evening at 6 pm and is only released at 6 am the following morning. Inside the police station, he is not allowed to have his cell phone and cannot communicate with the outside world. If he misses one night, he will be sent back to prison for at least two weeks. His co-defendant, Maher, who was released earlier in January, is being subjected to the same treatment.7

“They are taking exceptional measures against us,” Adel said. “There’s 12 hours every day where I can’t do anything. I’m only half free.”8

“The way probation is being implemented is actually imprisonment. It violates the spirit of the law.” —Mohamed Elhelw

The repressive measure is technically legal. Adel—like many of those sentenced to prison under the protest law—was also convicted on a raft of other charges, including articles in the penal code that specify crimes such as “threatening” and “display of force.” Egypt’s Constitutional Court deemed the two articles overly vague and ruled them unconstitutional shortly before the 2011 revolution, but after Mubarak’s ouster, the military council that replaced him reinstated the articles to clamp down on the wave of protests then gripping the country.9

Defendants convicted on either of those two charges receive a mandatory period of probation equal to their prison sentence, up to five years. Even in cases where probation is not mandatory, judges can impose it at their discretion.10

While probation generally implies house arrest from sunset to sunrise, under a 1945 law that human-rights lawyers point to as problematic, police have the discretion to force the ex-prisoner to spend that time under supervision inside a police station. The practice was practically unheard of for political prisoners until now.11

“It is legal, but they are exploiting the law and imposing an exemplary punishment on the defendant because these people are considered opponents of the regime,” said Mohamed Elhelw, the head of the legal unit for the Egyptian Commission for Rights and Freedoms. “This is unprecedented. The way probation is being implemented is actually imprisonment. It violates the spirit of the law.”12

Adel and Maher are among the first detainees to be released after completing their sentences (as opposed to being acquitted on appeal or freed on amnesty) following the massive crackdown on any and all opposition voices in the wake of the 2013 coup that brought military general Abdel Fattah el-Sisi to power. Yet thousands of other detainees, including members of the Muslim Brotherhood, university students, and prominent activists like Alaa Abdel Fattah, face the same predicament upon their release.13

Sisi was the first world leader to congratulate Trump after he won the election in November.

“I’m sure that most of the people charged in protest cases will have this kind of probation,” said Ahmed Mohamed, a human-rights lawyer and Egypt researcher for Amnesty International who has been studying the issue. “The authorities want to punish people to the maximum extent of the law. You can’t sentence someone to 25 years for protesting, so the courts did this to overcome legal restrictions and delay people’s freedom. The goal was to make the punishment as harsh as legally possible.”14

During his prison term, Adel spent much of his time studying and was allowed to take exams, eventually getting a diploma in political economy from Cairo University. He is now studying for another diploma focused on civil society and human rights. His lawyers are filing a petition to have the probation eased in order to allow him to complete his studies at the university, which lies far from his home in Giza.15

“At least prison allowed me to take my exams, but in this current situation it’s a huge problem,” Adel said. “If I lose this case it would be better to go back to prison.”16

There is little indication that the severe tactics deployed by the Egyptian state will ease anytime soon.17

Egyptian president Sisi appears to be building close ties with new US President Donald Trump. Candidate Trump called Sisi a “fantastic guy” and touted the “chemistry” between the two after meeting him during the UN General Assembly in New York last September, and Sisi was the first world leader to congratulate Trump after he won the election in November. In a call in January, the two leaders also discussed a possible visit by Sisi to Washington.18

“The whole issue is that we have a dispute with the other side, who are today in power,” Adel said, speaking on January 25, the sixth anniversary of the Egyptian revolution that captured the global imagination. “What we offer to people is love and respect for privacy and respect for dignity. The other side is the one that produces ideas of hate and refuses the opinion of others and criminalizes dissent. This is the difference between us and them.”19