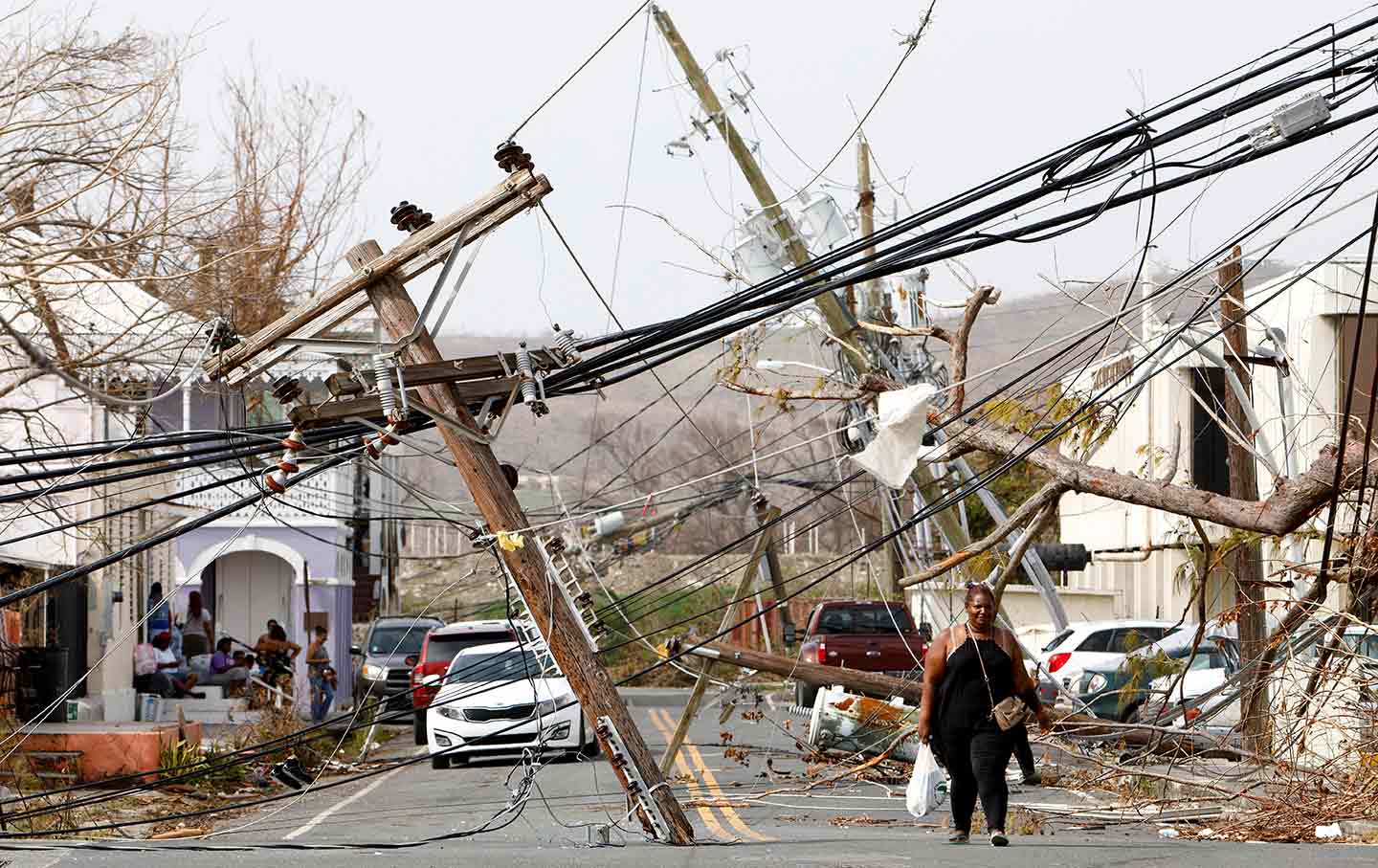 Residents of St. Croix make their way around and under obstacles blocking a main road nearly a week after Hurricane Maria raked the US Virgin Islands. (Reuters / Jonathan Drake)

Amid the daily infamies of Donald Trump’s presidency, his worst dereliction of duty is his decision to accelerate the greatest threat facing this country: catastrophic climate change.

Trump is called a climate denier. He is actually a warrior for climate calamity. In many ways, he is the first president of the climate-catastrophe era. We’ve already witnessed the terrors—the fires that recently ravaged California, the storms that savaged Houston and Puerto Rico, the floods in the Midwest, and the droughts that have forced millions to migrate from what used to be called the Fertile Crescent. Europeans responded to those terrors with action in the recent EU parliamentary elections, rewarding Green parties across the continent with their strongest results ever. Trump, however, has chosen to go all in on the side of worsening this direct security threat to our country and our world.

In a recent speech consisting of a stale stew of lies, exaggerations, boasts, and insults, Trump celebrated his collusion with the furies that threaten us, hailing the United States as the “energy superpower of the world.” He bragged that “American energy independence” would make our nation wealthier and safer. He boasted about getting out of the Paris Climate Accord, “replacing the EPA,” torpedoing Barack Obama’s Clean Power Plan, “unlocking” the Permian Basin in Texas and New Mexico, and more. And he repeated his mockery of the Green New Deal, calling it a “hoax.”

The reality of climate change is no longer disputed by anyone willing to be honest about the science. We are on a path that has already begun to produce horrific casualties and rack up staggering costs. A recent United Nations report warns of the extinction of 1 million species—and the imperiling of humanity itself—in the next few decades. The conservative scientific consensus is that, to avoid unimaginable destruction, we have about 12 years to transform how we produce energy. Continuing on the current course will cost us trillions of dollars over the coming decades—more than the Green New Deal—and, more important, will displace hundreds of millions of people and spread disease, starvation, and death at unprecedented levels. No wall that Trump could build would be able to deal with the 140 million climate refugees that the World Bank predicts by midcentury.

The stakes could not be higher. As Bill McKibben, the climate expert who first warned about global warming 30 years ago, noted, “The problem with climate change is that it’s a timed test. If you don’t solve it fast, then you don’t solve it. No one’s got a plan for refreezing the Arctic once it’s melted…. We’re not playing for stopping climate change. We’re playing—maybe—for being able to slow it down to the point where it doesn’t make civilizations impossible.”

Our betrayal by Trump and the Republican Party in this crisis is self-evident. Sadly, the leadership of the Democratic Party has been AWOL, as have too many voices in the news media, particularly on television. House Speaker Nancy Pelosi, Senate minority leader Charles Schumer, 2020 contender and former vice president Joe Biden, and many other Democrats mistakenly seem to think that the best response to extremism is moderation. Rather than seek a mandate for the major structural changes we need, they woo a mythical center with modest reforms. Biden, for example, proposes nothing more than a return to the Paris Climate Accord—a policy that might have been promising a few years ago but represents inadequate moral signaling now.

In the end, as McKibben writes, the fossil-fuel industry and its collaborators will lose this battle. Already, insurance companies are refusing to guarantee against the losses that are coming to coastal properties. The only questions now are how long it will take for the climate destroyers to lose and how much damage will be done in the interim. This is why Trump’s collusion with them is his greatest dereliction of duty.

The change we need will come—as it usually does—from independent citizens’ movements calling our compromised and corrupted leaders to account. They include the Extinction Rebellion, which recently brought traffic to a standstill in London. The millions of children walking out of school. The young activists of the Sunrise Movement, who have vowed to force the Democratic presidential contenders to take positions on the Green New Deal—and who demand that this debate be at the center of the next election. These efforts would be amplified if the news media reported with heightened urgency on the climate crisis and the growing movements to address it. Toward that end, The Nation and the Columbia Journalism Review are launching a project, Covering Climate Now, to bring journalists together to find ways to dramatically improve reporting on the climate crisis and its solutions.

Fifty years from now, McKibben says, we are going to run the world on sun and wind. The choice now is, do we allow the world to become completely broken, or do we act in time to avoid the worst? Trump has committed his administration to buttressing the fossil-fuel interests. Now we will see who has the courage and the conviction to stop them.