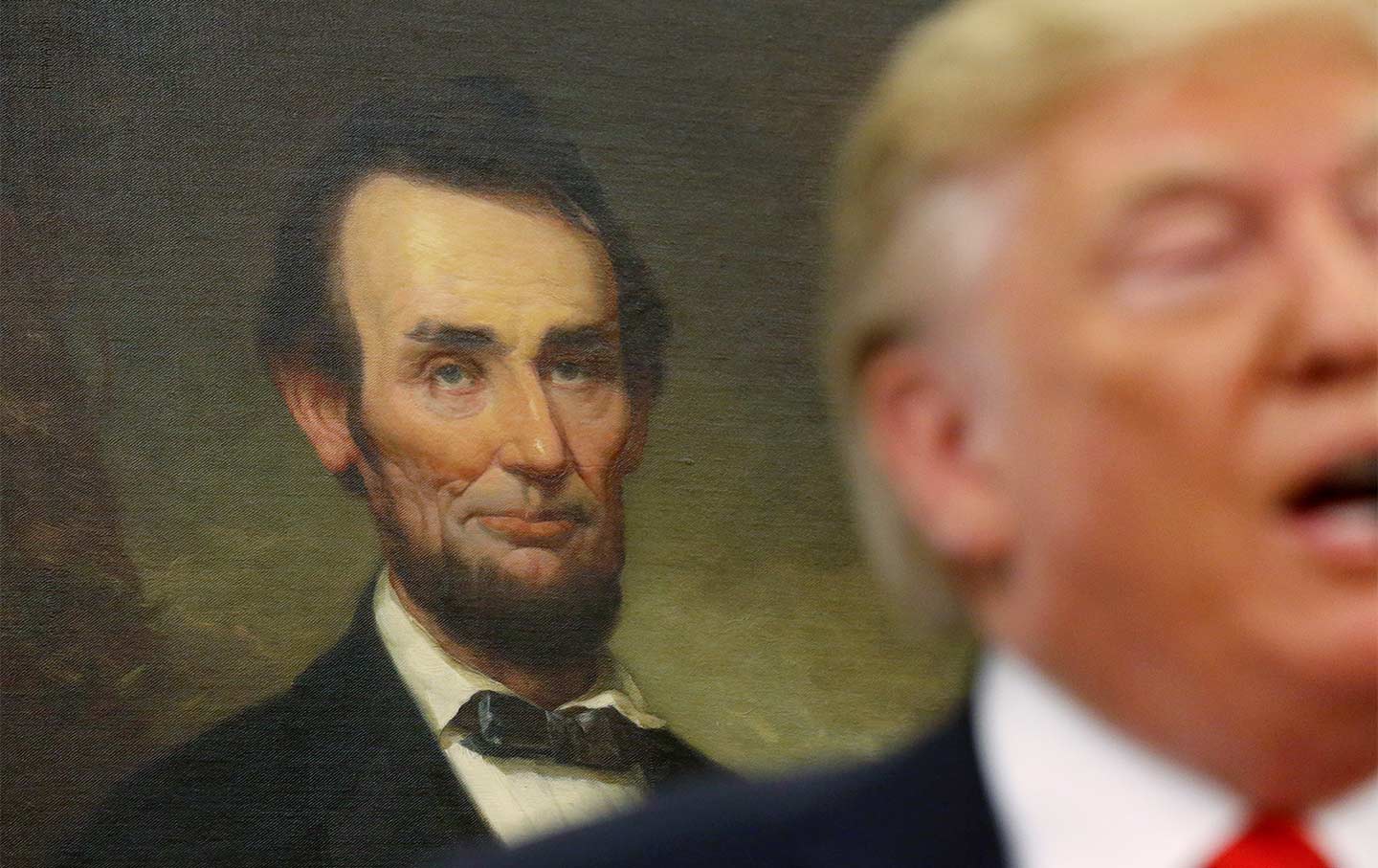 A portrait of US President Abraham Lincoln hangs behind US President Donald Trump, on September30, 2019. (Reuters Pictures / Leah Millis)

Now, as Trump faces the prospect of impeachment, he is casually retweeting references to the prospect of a civil war breaking out if he is held to account. This turn of events ought to unsettle Republicans as much as it does Democrats. The good news is that a number of Republicans are speaking up for impeachment—or, at the least, for the impeachment inquiry. The bad news is that most Republicans still refuse to recognize that the time for partisan political positioning must end when a president’s defenses become so dangerous and destructive as those of Donald Trump.

There will always be those who say it is a fool’s mission to demand that Republicans do the right thing. But anyone who knows the history of impeachment will tell you that the process can overwhelm and overcome partisanship. And anyone who is witnessing Trump’s unhinged response to the mere threat of accountability will recognize that this isn’t a president who merits support from members of Congress who swear an oath to defend the Constitution of the United States against all enemies, foreign and domestic.

Trump’s rejection of the historical premises of the Party of Lincoln that until well into the 20th century were well understood by Republicans—and to which a good many Republicans still pay some measure of respect—has been a central theme of his presidency. In 2017, after violent racists waving Confederate flags sparked rioting in Charlottesville, the president imagined there to be “very fine people, on both sides” of a dispute between bigots and those who oppose bigotry. Trump frequently has hailed slave-holding Confederate commander Robert E. Lee as “incredible” and “great.” And just this year, the president defended his remarks regarding the 2017 violence in Charlottesville—where 32-year-old Heather Heyer, a paralegal and local civil rights campaigner, was killed by a Nazi sympathizer from Ohio—with the excuse that “I was talking about people that went because they felt very strongly about the monument to Robert E. Lee, a great general.”

The president talks up the losing side of the Civil War so often that Think Progress headlined a 2018 article “Trump can’t stop making flattering comments about the Confederacy.” Rebecca Solnit has explained that Trump is “an openly Confederate president, one who has defended Confederate statues and Confederate values and Confederate goals, because Make America Great Again harks back to some antebellum fantasy of white male dominance.”

What makes Trump’s Civil War obsession even more bizarre is the trouble he seems to have with the question of which side actually claimed victory at Appomattox. When members of the Boston Red Sox visited the White House, Red Sox chair Tom Werner recounted that Trump “was talking about Abraham Lincoln losing the war and said, ‘Well, you guys have lost a game or two, but this was a war.’”

Lincoln and the Union, it will be noted, did not lose the Civil War—even if the champions of the Confederacy’s “Lost Cause” continue to struggle with this fact of history. That is something Republicans who have not lost their senses might want to remind the president of as he conflates a legitimate and necessary impeachment inquiry with military conflict. The point of impeachment, as understood by the founders, is to allow the Congress to hold errant executives to account—without violence. It is an essential expression of the system of checks and balances that underpins the American experiment. Unfortunately, Trump has never gotten the point.

Trump has entered his antebellum phase. He is ranting and raving about traitors and spies and retweeting a right-wing pastor’s claim that “if the Democrats are successful in removing the President from office (which they will never be), it will cause a Civil War like fracture in this Nation from which our Country will never heal.”

Trump’s amen corner on the right has adopted the civil war framing. Rush Limbaugh says we are in the midst of a “Cold Civil War.” And the extremist Oath Keepers group suggests that we are “on the verge of a HOT civil war,” claiming that “Like in 1859. That’s where we are.”

Democrats are aghast. The media is concerned. But the fact is that this is the Republican Party’s hot mess, and Republicans who seek a future in America’s two-party system need to back away from the cliff their president is steering toward. I respect the fact that lots of people believe the GOP is beyond redemption. But what about those who don’t? Shouldn’t they be speaking up now? Don’t Republicans need to say, for their party’s sake and the sake of the republic, that they will not let their president tear the country apart? Shouldn’t they understand that, as former Republican senator Jeff Flake wrote on Monday, they cannot continue to support “a man who has, now more than ever, proved to be so manifestly undeserving of the highest office that we have.”

Some Republicans have stepped up. Representative Adam Kinzinger, an Illinois Republican, read Sunday’s “civil war” tweet from the president and responded with a tweet of his own. The former Air Force pilot declared, “I have visited nations ravaged by civil war.… I have never imagined such a quote to be repeated by a President. This is beyond repugnant.”

Kinzinger has not gone so far as to endorse the impeachment inquiry that House Speaker Nancy Pelosi announced last week. But a pair of Republican governors, Phil Scott of Vermont and Charlie Baker of Massachusetts, have done the right thing—morally and politically—and endorsed it. Nevada Representative Mark Amodei has raised a lonely House Republican voice in defense of congressional oversight of the president, and Republicans for the Rule of Law has launched a $1 million campaign targeting Republican senators with the message that “the country is in crisis.” It is time, the group says, for Republicans in Congress to condemn the president’s behavior “without reservation.”

Former Massachusetts governor Bill Weld, who is challenging Trump in the 2020 Republican primaries, says, “The Ukraine caper by the president is some combination of treason, bribery and other high crimes and misdemeanors. The one thing that’s absolutely clear is it is grounds for removal from office.” Flake, the Arizona Republican who left the Senate at the beginning of this year, asserts that “with what we now know, the president’s actions warrant impeachment.”

Republicans in Congress should recognize by now that Trump ought to be held to account, just as they should recognize that his efforts to divide the country in order to avoid accountability are dangerously irresponsible. Of course, as Flake says, speaking up is politically risky—but perhaps not as risky as some believe. The latest CBS News poll shows that 55 percent of Americans support the impeachment inquiry. Yes, it has overwhelming Democratic support and an even level of backing from independents. But the reason that number is so high is because, according to the survey, 23 percent of Republicans (almost a quarter of the party base) says it’s time for this investigation to go forward. This is not the stuff of a civil war. This is the evidence of a country that could, if a few more Republicans did the right thing, begin to unite around its Constitution.