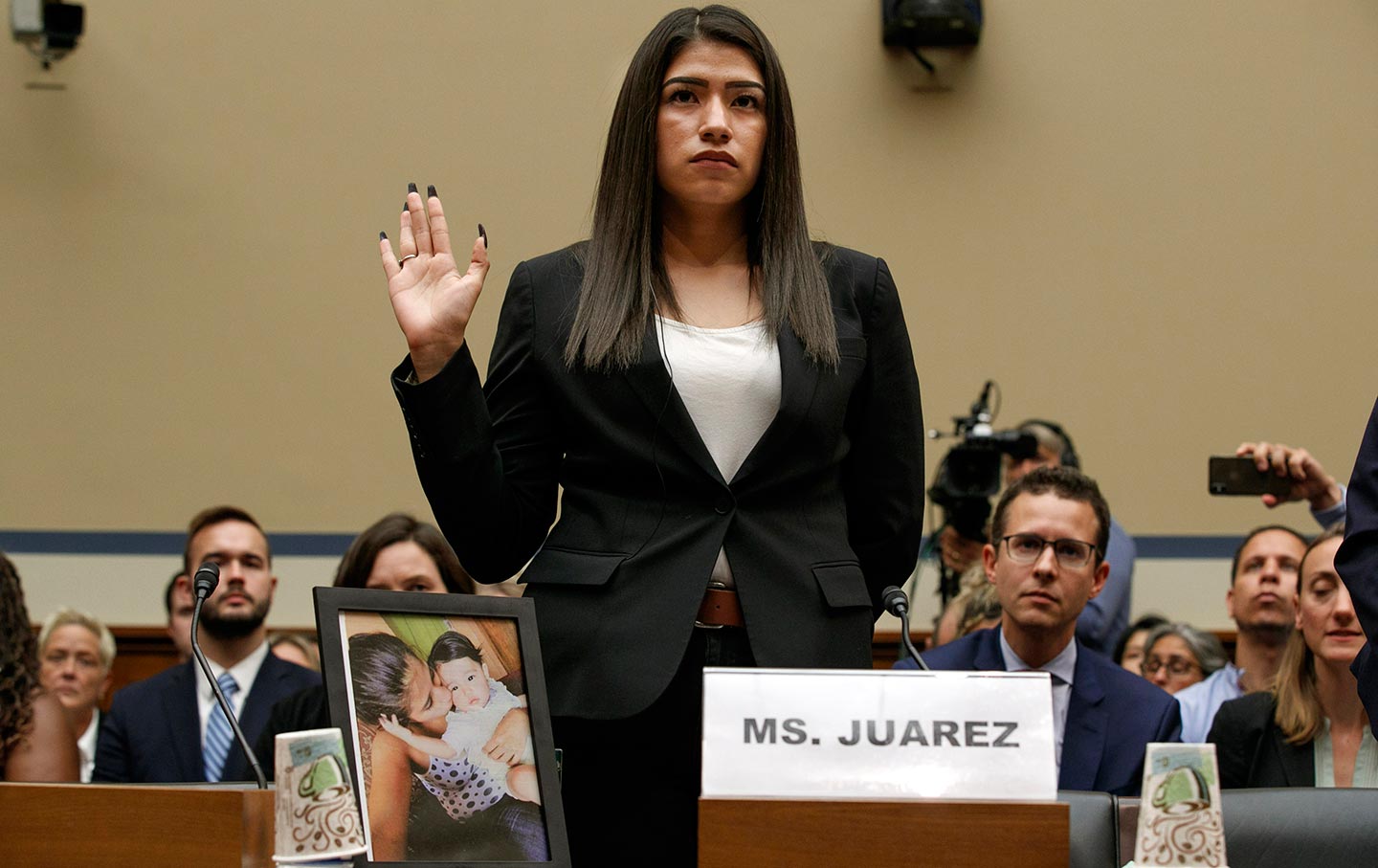 Yazmin Juárez, standing next to a photo of herself holding her daughter Mariee, 1, who died after being released from ICE detention, is sworn in at a House Oversight subcommittee hearing, July 10, 2019, on Capitol Hill. (AP / Jacquelyn Martin)

The Noise: Trump’s rambling statement at his press conference last week, shortly after the impeachment inquiry was announced, in which he congratulated himself on building an impenetrable border wall that even mountain-climbers wouldn’t be able to scale. The Signal: Over the past several days the administration has unveiled a draconian cut in the number of refugees to be admitted next year and, via executive action, has sought to unravel the decades-old refugee resettlement program by giving cities and states the ability to veto resettlement in their communities.

Next year, the number of refugees admitted will be capped at 18,000; the number actually admitted will likely be lower still. That’s down from the target of 110,000 that Obama set in 2016, in his last presidential determination on the issue. In fact, Trump’s cap is the lowest since the modern refugee resettlement system was codified, in 1980.

At the same time, as the administration locks down the southern border via a series of rule changes, it announced an agreement with Honduras allowing asylum seekers to be sent there rather than admitted into the United States. That came after Trump had already strong-armed Guatemala and El Salvador into similar agreements. What does this mean? Basically, that anyone who transits through Central America en route to safety in the United States can now be arrested and put on a plane to one of those three countries—which have high crime rates and are among the poorest in the Western Hemisphere. That’s not just absurd, it’s criminal.

That’s the bad news on the immigration front. But lost amid the other headlines this week were three extraordinarily positive judicial rulings.

Trump Is Revving Up the Attack on Workers’ Rights

With Trump, We’re in the Realm of ‘The Handmaid’s Tale’

First, in California, Federal Judge Dolly Gee ruled that the terms of the Flores agreement, which have the effect of limiting how long immigrant children can be kept in detention, could not be superseded by new Trump administration regulations allowing for indefinite detention. The administration will, of course, appeal the ruling, but at least for now, its sick plan to create family concentration camps is on hold.

Then, in quick succession, a Washington, DC, court declared illegal the administration’s plans for fast-track deportation of undocumented immigrants arrested anywhere in the United States who can’t prove they have been here continuously for two years. That’s important; currently there’s a zone, within 100 miles of the border, in which undocumented immigrants have few constitutional protections and little access to immigration courts. Trump had sought to extend that zone to the entire country, but the court ruling puts the kibosh on that.

Finally, in Gonzalez v. ICE, a federal district court restricted when and how ICE could request that local police detain immigrants; the judge ruled that ICE was violating the Fourth Amendment in its catch-all missions against immigrants by mining federal databases that contain inaccurate or incomplete information.

These are huge developments. Pay attention to the Signal—the struggle over how this country treats immigrants is truly heating up.