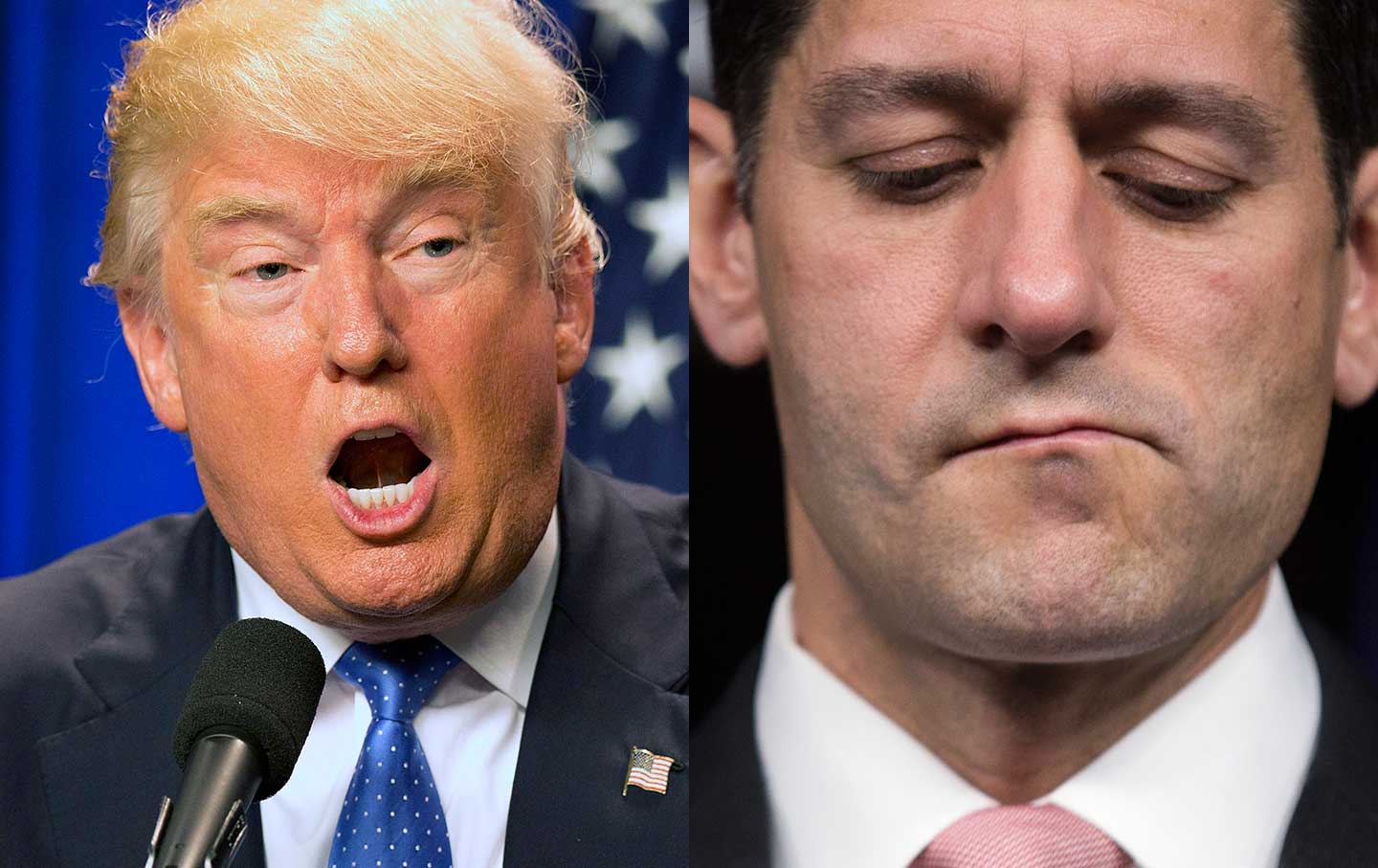 Instead of thanking House Speaker Paul Ryan for all he has done for his presidential candidacy, the Republican nominee has been taunting his most prominent supporter.

Trump eventually “got there” and backed Ryan, announcing on Friday night (at a rally in Wiscondin but not in Ryan’s district) that
“in our shared mission, to make America great again, I support and endorse our speaker of the House, Paul Ryan.”

Trump owed Ryan that one.

After all, if there’s anyone who deserves Donald Trump’s support, it’s Paul Ryan.

The point here is not to suggest that the speaker merits reelection. He’s a miserable excuse for a congressman who thinks about nothing except his own political advancement—from congressional aide to congressman to House Budget Committee chair to 2012 Republican vice-presidential nominee to House Ways and Means Committee chair to House speaker to 2020 Republican presidential prospect.

Ryan had never represented southeast Wisconsin’s first congressional district well because he has always chosen Wall Street over Main Street. As such, he has voted for trade deals that have been devastating for workers and communities in a district that has seen factory after factory close. He has voted for Wall Street bailouts while refusing to support basic investments in workers and communities in his district. And he has proposed speculation schemes that threaten to destroy Social Security, Medicare, and Medicaid programs that are vital to his constituents.

Few members of Congress are so worthy of rejection as Paul Ryan—a point that his angry primary challenger, businessman Paul Nehlen, has made with a renegade campaign that has stirred national attention.

Nehlen is supportive of Trump.

Media outlets made a big deal about Ryan’s discomfort with Trump last spring. But Ryan’s “caution” was theatrical rather than real.

Ryan’s complained about Trump’s religious bigotry and anti-immigrant hysterics. But the speaker always pledged to support the Republican nominee for president.

Weeks prior to the Republican National Convention, Ryan gave his blessing to Trump’s candidacy—as everyone knew he would. This speaker is known for nothing so much as putting party ahead of principle.

Long before he endorsed Trump, however, Ryan enabled the billionaire’s candidacy. His mild criticisms of the billionaire combined with promises to support the nominee legitimized Trump in the eyes of GOP primary voters.

Or perhaps Trump is both.

No matter. As the Republican nominee for president taunted the Republican speaker of the House, Ryan announced on Thursday that he was maintaining his support for Trump.

For Paul Ryan, party loyalty is all that matters — even when it means he must shed what remains of his dignity.