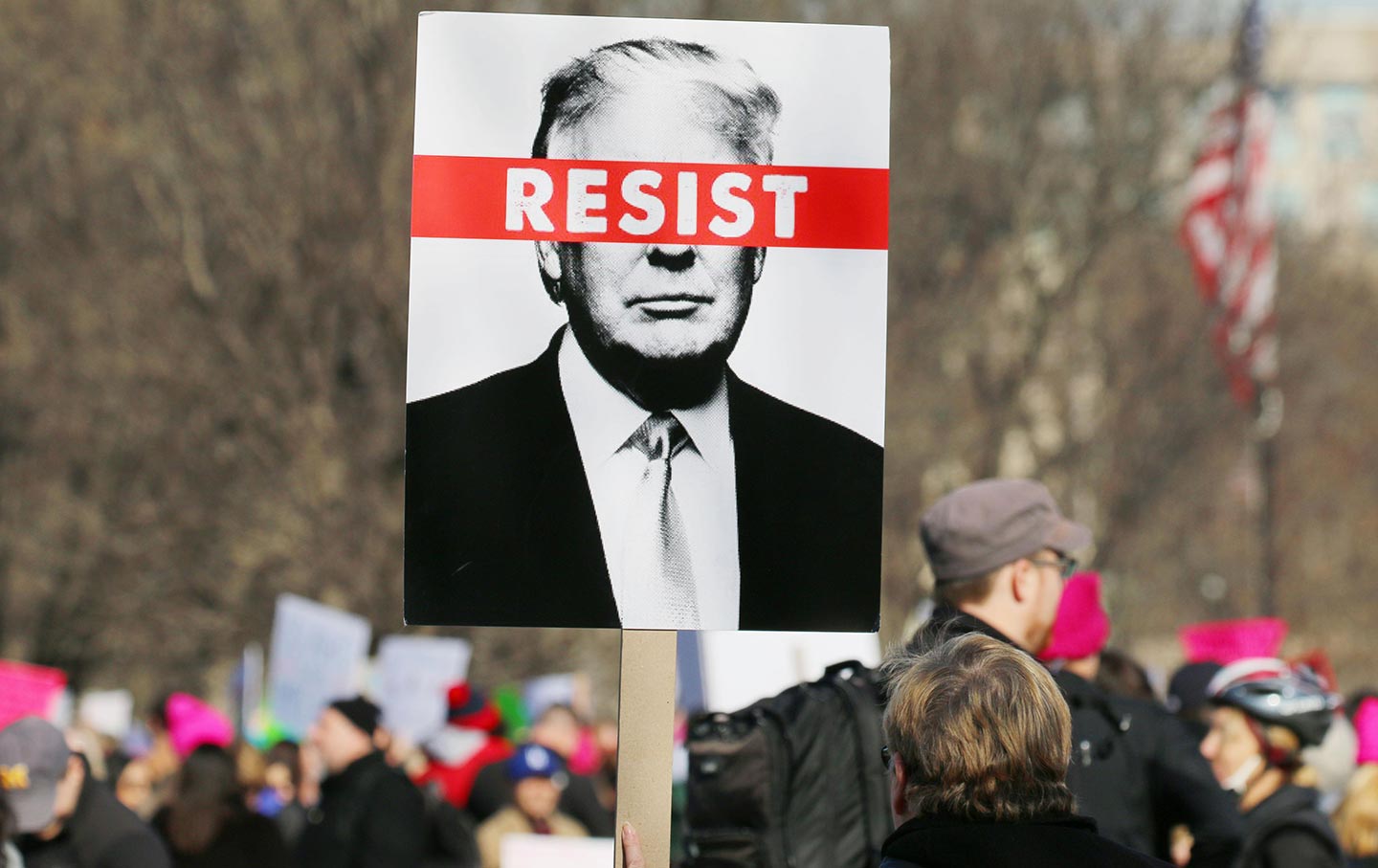 Protesters at the Women’s March in Washington on January 20, 2018, the first anniversary of Donald Trump’s inauguration. (Kyodo via AP Images)

The Trump era has created a new social ritual, a verbal tic added to any greeting, like a secret handshake to identify yourself as a part of the beleaguered opposition. If I ask someone how they’re doing, the traditionally banal exchange now includes a status update on the person’s emotional response to the fact of this presidency. E-mail greetings that wish me well invariably come with a caveat: “Well, as well as can be expected, given the state of the world.” Life’s normal pitfalls and disappointments get tangled up with Trump’s reign and intensified as a result. Recently, a friend’s partner broke off their relationship on the same day that Supreme Court Justice Anthony Kennedy announced his retirement; it wasn’t clear which piece of depressing news hit my friend with greater force.1

I’ll confess, I find all this ritualistic despondency insufferable. I hear in the repetition of grief a longing for a return to normalcy, a backward march to stability. I do not share this desire. And anyway, the Trump era isn’t actually a deviation from the American norm; it is, rather, a culmination of all that we have tolerated as normal until now. So these are not times to endure, or even merely to resist in the hope that we can somehow reestablish our national equilibrium—I pray that we cannot find our way back to that deadly peace. These are times to destroy the old and build anew, and the old never falls without a painful fight.2

We are all slowly grasping that Barack Obama was only partly correct when he insisted that America isn’t a collection of red states and blue states. Fierce partisanship may not define us, but at least at the national level, it has long been a safe proxy for the real divide, which is a nation split into two camps: those who believe in white supremacy and those who don’t. And in this moment, Donald Trump has asked us to finally answer the question: Is America a country defined by the pluralism declared in its founding documents, or by the segregation and racial terrorism that it has practiced since its inception?3

There can remain no doubt that the president is a white supremacist. And I don’t mean that in an unconscious, we’re-all-sorta-racist way. He is actively working to maintain an American caste system in which white people of all economic strata are at the top, and as part of that effort he is waging a culture war to dehumanize nonwhite people. Occasionally, he’ll just come out and say it: “shithole” countries, describing toddlers as murderous invaders, “catch and release,” and the like. But Americans of all races and ethnicities are well trained in racial denialism, and that makes this a jarring moment. I sometimes wonder if all the ritualistic grief is just a collective mourning of racial innocence, the pain of awakening to a reality Trump won’t let us ignore.4 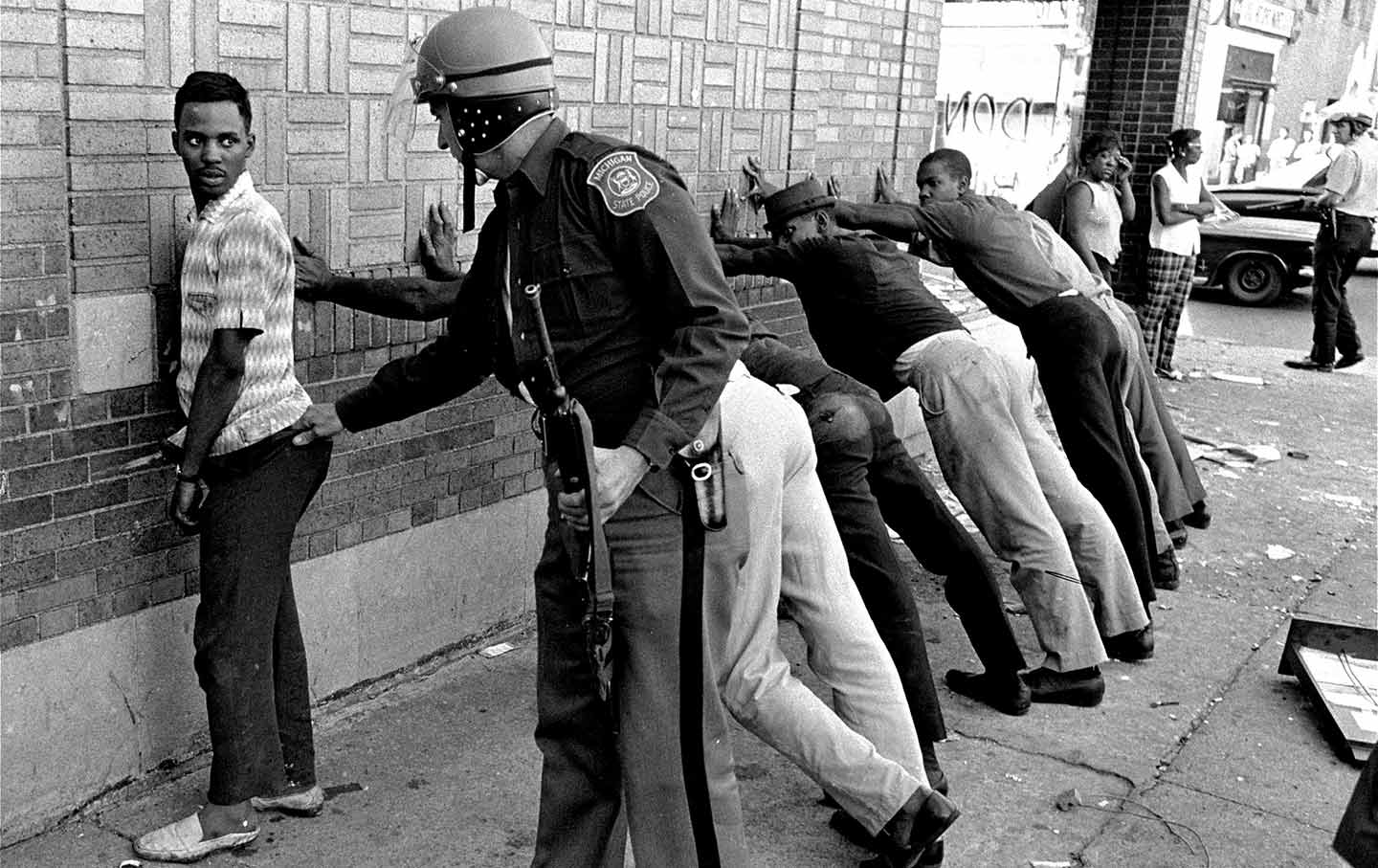 Take the past few weeks. The fact of brown and black children screaming out as they are ripped from their incarcerated parents has been a mundane fact of American life for centuries. Breaking up families of color is actually a staple of our public policy, one we have all long accepted as normal. We’ve accepted it to protect national security and fight crime, splitting up hundreds of thousands of black and brown families a year, even as state prison systems steadily cut back on services that once kept families connected despite incarceration. Never mind the tens of thousands of kids who are sitting in some form of lockup every night in America. We’ve accepted it in the name of public health, tearing babies from their mothers’ arms in our punitive reactions to drug epidemics. We’ve even told ourselves we’re doing it in the best interests of the family, with generations of paternalistic ideas about child welfare. Native American children are represented in foster care at nearly three times the rate of their population share.5

Trump’s cruelty at the border has called this particular form of racial terrorism into question. He sharpened a normal, racist policy tool into a pointed, racist weapon against would-be migrants—against America’s changing demographics. The details are, for once, too abhorrent to ignore or explain away: deliberately separating families as a deterrent to migration; continuing to enforce the policy in the face of evidence that it does not work as a deterrent, that it just becomes a form of torture. This obviously demands resistance, and it surely depresses many of us—at least those whose families are at the tip of the spear.6

But it’s also one of many areas in which Trump’s openly white-supremacist agenda offers America a clear option. We can resist and fight our way back to the old equilibrium that allowed less explicit versions of this same terror, or we can demand something new. Trump responded to the outcry over his family-separation policy by once again charging, falsely, that Democrats want “open borders.” The Democratic leadership once again shouted back, accurately, that they want no such thing. But why not open borders? Why can’t we have that debate in earnest? Why not challenge the fundamental ideas of our immigration system?7

Short of that, never mind Trump’s “zero-tolerance” policy: Let’s ask why we’re incarcerating people for the act of migration at all. We haven’t always done it; we made the choice to begin prosecuting people for border crossing during the Clinton era, and we can just as easily choose to stop. The Trump era can bring about grief and longing for the stability of the past, or it can spur these kinds of questions about the white supremacy baked into so much of our policy and politics. There is no returning to the pre-Trump era, and that is good. The policies of that era were built in service to white supremacy, and they were never dismantled to reflect the plural society that has begun to emerge in my lifetime. We now have the opportunity to reckon with our history, but coming to terms with your past is never pleasant. It’s ugly and painful. Best to accept that fact and get on with it.8