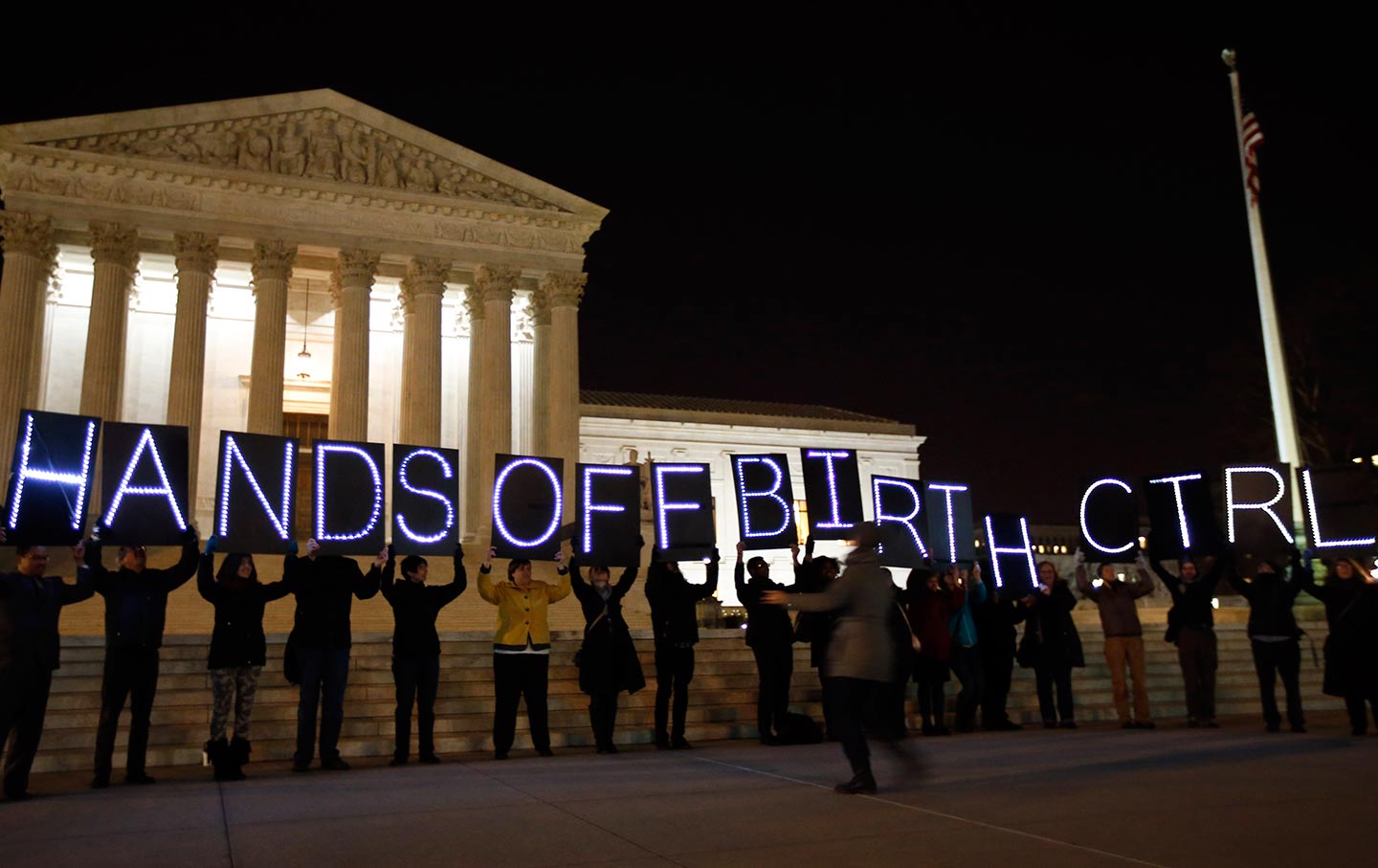 Women’s-rights supporters gather in front of the Supreme Court Building in March 2014 while the Court weighs whether corporations are exempt from the health-care law requiring coverage of birth control for employees. (AP Photo / Alex Brandon)

Remember when feminists warned that the anti-choice movement had birth control in its sights as well as legal abortion? Oh no, pundits assured us, they would never. Americans love birth control! In fact, if pro-choicers weren’t so obsessed with baby-killing, they would promote birth control as the way to prevent abortion. So true. Why didn’t we think of that?

Of course, feminists had indeed thought of that. Providing birth control has been Planned Parenthood’s mission since 1916, for instance. Yet now the same tactics that have been so successful in the flight against abortion—defunding, restricting access—are being applied to birth control, too.

In the United States, birth control and abortion provision are connected. Although Planned Parenthood is the big brand name in reproductive-health care, most abortions are provided by independent clinics, and those places also provide contraception. Since 2012, 30 percent of these have closed. That’s 147 clinics—22 in the last year alone. If you only read the headlines, you might not grasp why this is happening. Didn’t the Supreme Court throw out laws like the ones in Texas that used medically unnecessary regulations as a pretext to drive clinics out of business? Yes, it did. Whole Woman’s Health v. Hellerstedt was a great victory. But clinics can’t be opened and shut like water faucets. Most of the 21 clinics that shut down in Texas remain closed. And laws are only one of the reasons why clinics have been closing. Other issues include low Medicaid reimbursement rates, loss of insurance coverage for abortion, and violence—when Zachary Klundt, the son of a prominent Montana anti-abortion activist, trashed All Families Healthcare in Kalispell, destroying everything down to the family photos on the provider’s desk, it did not reopen, leaving a huge swath of the state without access to abortion care. Ironically, medical advances—long-acting birth control like IUDs and implants, emergency contraception available without a prescription, Pap smears every three years instead of annually—mean fewer patient visits. The number of abortions has been falling and the Affordable Care Act may have played a role in that: Its provision eliminating co-pays for birth control means fewer unwanted pregnancies, while its restrictions on insurance coverage for abortion may have made some women unable to pay for the procedure.

You’d think anti-choicers would love the ACA, but that would mean admitting that birth control prevents abortion. To them birth control means sex, and sex means abortion—in fact, to the hard-liners, contraception is itself a form of abortion. So it should come as no surprise that the expanded access to birth control provided by the ACA is in peril, at the same time as the Republican Party steps up its jihad against abortion providers. Right now, an Obama-era rule allows women on Medicaid, like other women, to get care from any federally qualified health center. This “freedom of choice” rule is the main reason it has been so hard to defund Planned Parenthood; a state bent on depriving Planned Parenthood of government funding would have to reject federal Medicaid payments for reproductive-health care. Texas did that in 2013, with disastrous results: The network of family-planning providers legislators claimed could handle the displaced patients never provided comparable services. Tens of thousands of women lost access to contraception; unplanned births to women on Medicaid increased 27 percent. Undeterred by Texas’s experience, Iowa Governor Terry Branstad has just signed an appropriations bill rejecting $3 million in federal Medicaid funds in order to block reimbursements to Planned Parenthood and independent abortion providers. Branstadt claims that $3.3 million in state funds will ensure that patients can get care from family-planning providers free of the abortion taint. According to the Guttmacher Institute, that would require such providers to triple their patient load—overnight. Deprived of funding, Planned Parenthood has announced it will close four of its 12 Iowa clinics. Those closures will leave 14,600 patients without care. In May, the Rocky Mountain affiliate announced it will be closing six clinics, leaving Wyoming, along with North Dakota, without any Planned Parenthood clinics at all.

Trump’s 2018 Budget will further devastate family planning. It will bar Planned Parenthood and other abortion providers from participating in any program funded through Congress’s annual HHS-Labor bill. As Planned Parenthood explains in a press release, “This includes not just Medicaid, but the Title X program, Zika prevention programs, HIV prevention grants, Violence Against Women Act (VAWA) grants to prevent sexual assault, the CDC National Breast and Cervical Cancer Screening program, maternal and child health programs, STD and infertility prevention grants, and more.” Planned Parenthood currently serves 41 percent of all patients of Title X, the federal family-planning program for low-income women. If passed, the AHCA would not only bar women from using Medicaid for Planned Parenthood services; it would ultimately throw 14 million people off Medicaid, which covers around half of all childbirths in the United States. It could also be interpreted as permitting states to allow insurance plans to charge more for such “preexisting conditions” as having suffered domestic violence, been raped, or given birth. (The Washington Post’s “The Fact Checker” blog gave this claim “four Pinocchios,” on the grounds that coverage could not literally be denied, and anyway it would never happen, but in my view allowing insurers to charge whatever outrageous premiums they like for policyholders with preexisting conditions is, in fact, a denial of coverage.)

So here we are, in 2017, fighting for birth control with an administration that has stocked government agencies with anti-choice fanatics who see contraception as the enemy and funding it as a con. Health and Human Services Secretary Tom Price claims “not one” woman has struggled to afford birth control. FDA head Scott Gottlieb opposed the birth-control provisions of the ACA. Title X head Teresa Manning once said that “contraception doesn’t work.” Katy Talento, health-policy aide to the White House Domestic Policy Council, claims contraception leads to infertility and miscarriages. Charmaine Yoest, former head of Americans United for Life and now an assistant HHS secretary, thinks the IUD and emergency contraception are abortifacients. The latest: As Trump promised early in May, the administration is moving to roll back the ACA birth-control provision by allowing any employer to refuse on religious or moral grounds to cover birth control.

Advice to the ladies: Get that no-co-pay IUD today.