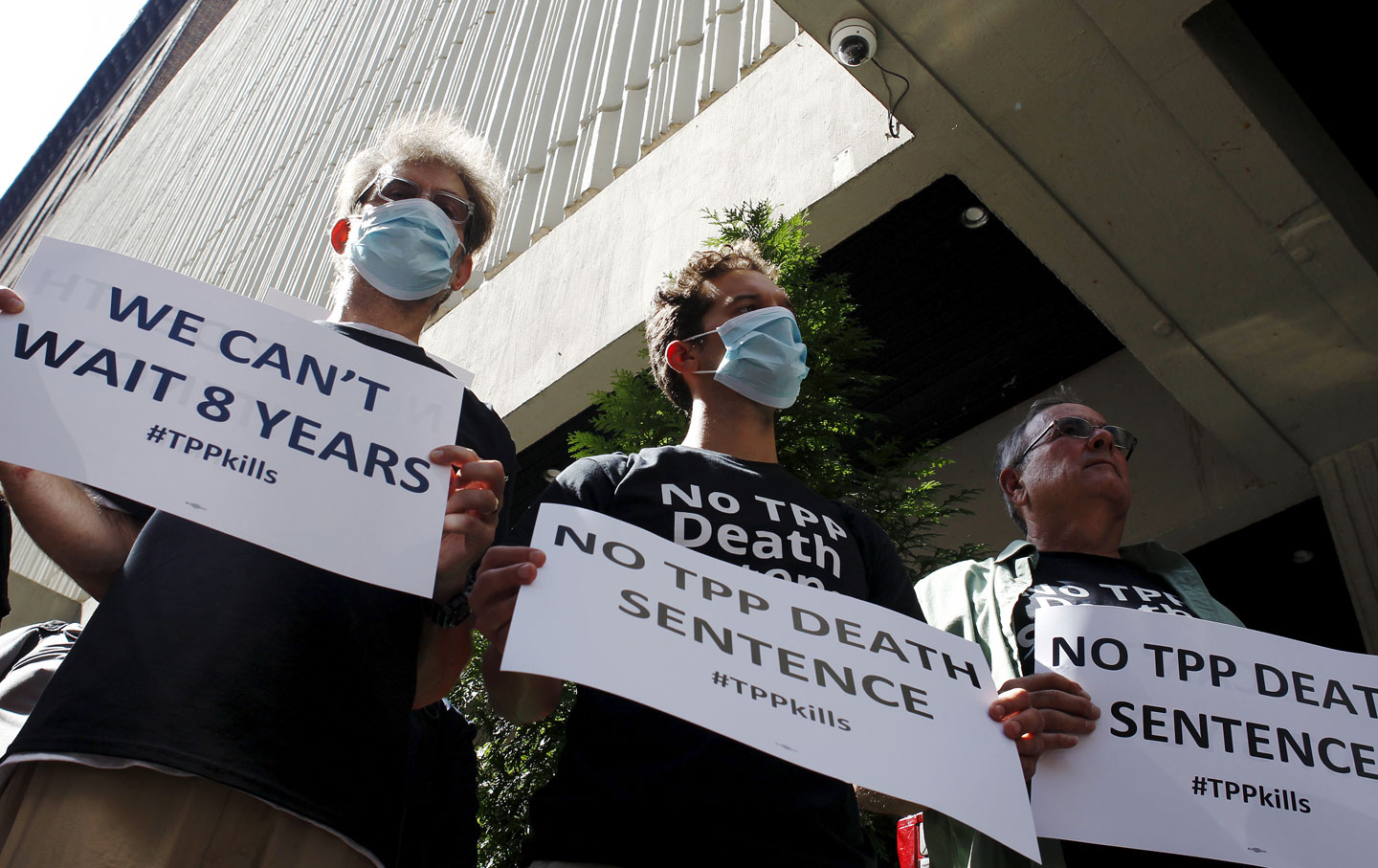 Patients living with cancer protest outside the hotel where the Trans-Pacific Partnership Ministerial Meetings were held in Atlanta, Georgia, September 30, 2015. (REUTERS/Tami Chappell)

After five years of intense talks, the United States and 11 other countries have reached an agreement on the massive Trans-Pacific Partnership trade deal. Negotiators announced the agreement early Monday morning from a ministerial meeting in Atlanta.

TPP opponents are now insisting the deal faces serious peril in Congress, where it will come up for a vote in about four months. Political advocacy often requires creating a sense of optimism and momentum even when it’s not warranted, but in this case there is legitimate reason to believe the trade deal will ultimately be rejected by either the House or the Senate, or possibly both.

Several brewing political disturbances could form a perfect storm to defeat the TPP in early February. The most immediate danger is in the House, where fast-track trade promotion authority passed by very narrow margins during a drama that included one failed vote.

Several key leaders of this revolt are TPP opponents, and the fast-track vote actually played an underrated role in the coup. Wyoming Representative Cynthia Lummis voted against fast track and was subsequently kicked off the GOP whip team. Lummis joined the House Freedom Caucus, the loudest band of Boehner critics, and is its only woman.

There is an unlikely but possible scenario where hard-right conservatives get their chosen candidate, Representative Jason Chaffetz, elected House Speaker. Even if that fails, several key leadership posts could end up being held by far-right House members, including the majority leader position. And currently majority leader Kevin McCarthy hasn’t exactly been demonstrating any political acumen in the week since announcing he’s running for speaker.

In the end, it’s clear that hard-right conservatives, who largely oppose TPP, have received a boost at the expense of more moderate members who tend to support the corporate objectives of the trade deal.

The Freedom Caucus is relatively small in number, and many of them already voted against fast-track and were unable to stop it. But the dynamic has shifted: Aside from potentially gaining more leadership positions, their political victory has put more pressure on the 50 pro-trade Republicans who voted for fast-track, especially with an election year—and primaries—approaching.

“You can look at the Freedom Caucus as being 30 or 40 people. But you also have to realize that [Republican] members are frightened to death that if they take a stand and the Freedom Caucus people are out there screaming at them for being wusses, they may create a primary challenge,” the American Enterprise Institute’s Norman Ornstein told The Nation last week. (He was speaking about the power dynamic in the House in general, and not TPP in particular.)

The same dynamic will be at play on the other side of the aisle, where 28 pro-trade Democrats provided essential votes that helped fast track pass. Most major unions and progressive groups are withholding any funding for these Democrats, and in some cases will be supporting anti-TPP primary challengers.

If even a relative handful of Democrats or Republicans get scared off by this new political situation—one quite different from what existed in June, when fast track passed—the narrow pro-trade margin in the House may evaporate. (Fast track passed by a larger margin in the Senate and TPP would likely do the same, especially since it will only need a simple majority. But it’s notable that Senator Orrin Hatch, a key architect of fast track and defender of the trade deal, is bashing the final agreement as “woefully short” of his expectations.)

All of these election-year pressures will be supercharged by the presidential race. Bernie Sanders and Martin O’Malley strongly oppose the deal, and Hillary Clinton has not yet taken a position. (She’ll have to take one relatively quickly; her excuse to date was that she hasn’t been able to read the deal, but it will soon be public.) On the Republican side, front-runner Donald Trump has also taken a strong stance against the deal and says often that China and Mexico are “screwing” the United States in trade matters.

Opposition to TPP from highly visible presidential candidates, smack in the middle of intensely watched primary-state voting, presents a serious challenge to final passage of the deal. This will be particularly true if Hillary Clinton comes out against the deal, which I personally anticipate she will. (It’s too important to major unions and key progressive activists for her to support TPP, and continued high poll numbers for Bernie Sanders may not leave her a choice.)

Obama has wrung votes out of a reluctant Democratic caucus in Congress using his political star power and several personal appeals. But if and when Clinton further supplants him as the new leader of the party, which for practical purposes does happen during an election year, Obama’s power in that area is weakened if she also opposes the deal. It only adds to the pressure on any pro-trade Democrats facing a primary: How can they support something of such significance when it’s opposed by the person on top of the ticket?

Congressional opponents clearly believe this is the case. “That’s perfect timing,” Representative Rosa DeLauro told reporters Monday morning. “Because the presidential election year is the perfect opportunity to shine a light on all the bad trade provisions in this deal.”

Trade deals don’t poll particularly well, particularly among Democrats, and particularly among the activists who help shape early primary contests. “There’s no greater disconnect between elites in this country and average Americans than on this trade deal,” said Representative Brad Sherman.

Beyond the politics, several policy stumbling blocks may emerge when the TPP text is finally released. Leaks about final concessions the United States made on monopoly pricing for pharmaceuticals and on the auto trade with Japan have further fired up congressional opponents, and when the text comes out, it’s anyone’s guess how bad the actual details will be in those and other areas. The administration has suggested many of the policy concerns are essentially untrue, while simultaneously refusing to release the actual details, but that two-step can’t continue much longer.

To put it simply, this is an extremely fluid situation with a very small avenue to passage for TPP. We may not know if will actually pass Congress until the final roll-call vote is over.