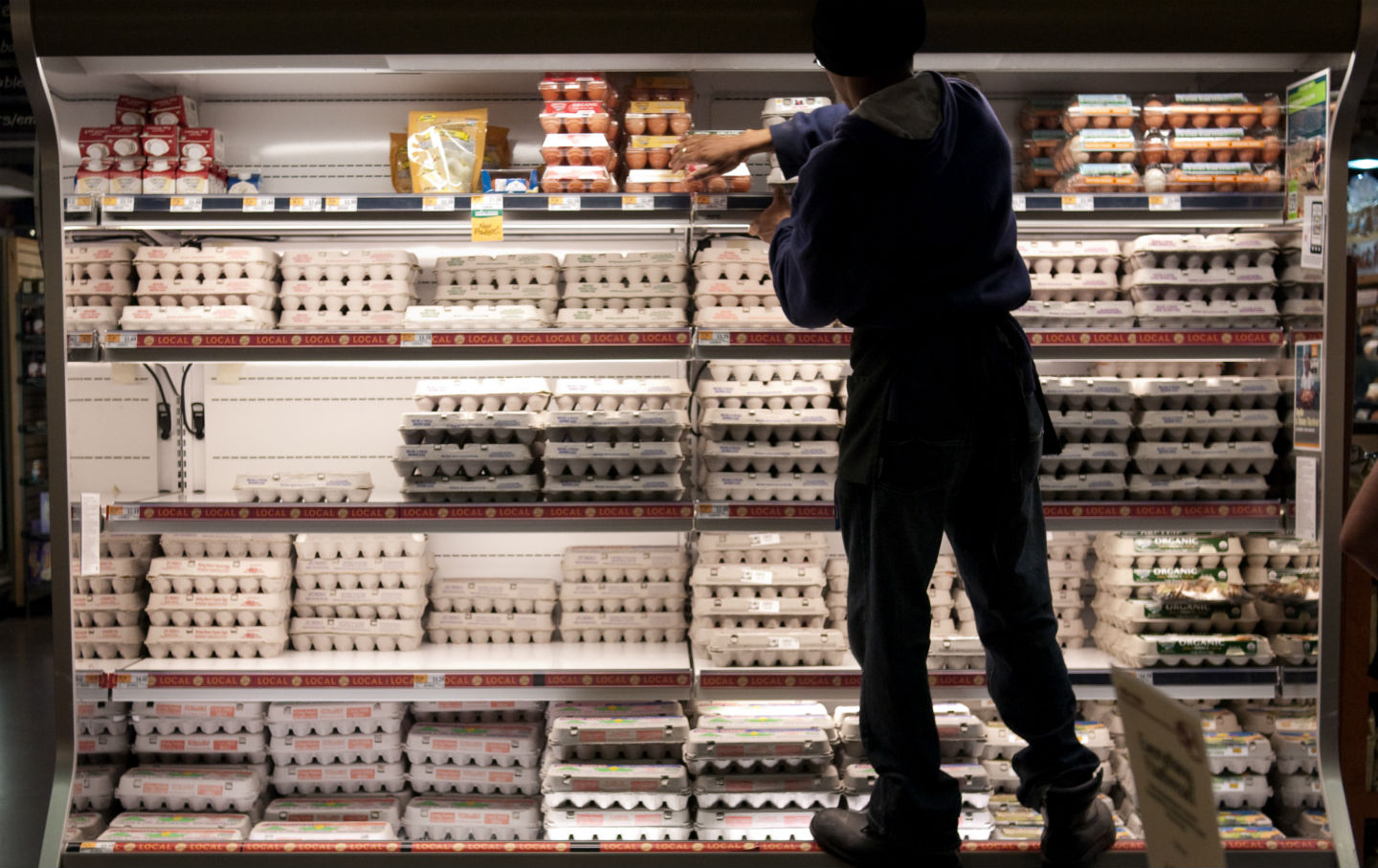 A worker stocks shelves in a grocery store. (Alex Barth / CC BY 2.0)

David Novak, the executive chairman of the company that owns KFC, Taco Bell, and Pizza Hut, has a lot to look forward to—$234 million, to be exact. That’s the size of his retirement package, which is the largest of any top executive’s. Novak, whose company has fought minimum-wage increases that would benefit its workers, can expect a $1.3 million check every month once he retires.

But many of his employees have no retirement savings at all. Yum! brands employs 537,000 people worldwide, most of whom work part-time for low wages; in the United States, only 8,828 of those workers have money in their 401(k) account.

The pay gap between workers and their bosses is well-known, but it turns out that the disparity in retirement assets is even greater. Nearly one-third of Americans nearing old age have no retirement savings at all, according to a report published Wednesday by the Institute for Policy Studies and the Center for Effective Government. The median balance in 401(k) accounts in 2013 was $18,433, which would generate a monthly check of just $104.

The average nest egg for a top executive, on the other hand, is $49.3 million. That’s enough to ensure a $277,686 retirement check every month. The top 100 executives have $4.9 billion in retirement savings combined—the equivalent of what 41 percent of American families have saved up for later life. “The CEO-worker retirement divide turns our country’s already extreme income divide into an even wider economic chasm,” reads the report. “The lavish retirement packages for executives and growing retirement insecurity for the rest of us are inextricably linked. The rules now in place create powerful incentives to slash worker retirement benefits as a way of boosting corporate profits and stock prices.”

The report identifies stark gender and race gaps, too. The 10 largest retirement packages belong to white men, for a total of $1.4 billion. The funds of top female CEOs adds up to $280 million, while the top 10 executives of color have a combined fund of $196 million. The disparity is even greater at the bottom of the income ladder: while about two-thirds of white workers have at least some retirement savings, 62 percent of African-Americans, and 69 percent of Latinos of working age do not. Executives aren’t just benefiting from lavish retirement packages: Some are actively making it harder for their own employees to save. About half of all American workers have jobs that don’t offer a retirement plan. Those that do usually offer 401(k) plans that are riskier and less generous than pensions. General Electric, for instance, used to offer a pension plan that employees paid into each month. After the recession, CEO Jeff Immel froze the pensions and shifted new employees to 401(k)s. His own nest egg shot up from $53 million to more than $82 million. Only 18 percent of workers nationally now have a pension plan with guaranteed monthly payments, compared with 35 percent in the early 1990s. More than half of Fortune 500 CEOs, on the other hand, can look forward to drawing on a pension provided by their company.

Executives also benefit from setting aside money in special tax-deferred accounts, while ordinary workers are limited in how much money they can set aside tax-free every year. According to the report, nearly 50 percent of the retirement assets held by Fortune 500 executives are in tax-deferred compensation plans that are not available to most of their employees.

“The retirement divide is not the result of natural law, but rather the rules established that disproportionately reward company executives far more than ordinary workers,” the report concludes. It lays out a variety of proposals for changing those rules in order to narrow the savings gap, including closing the tax loopholes that executives enjoy, and expanding Social Security to make up for the declining contributions made by employers.