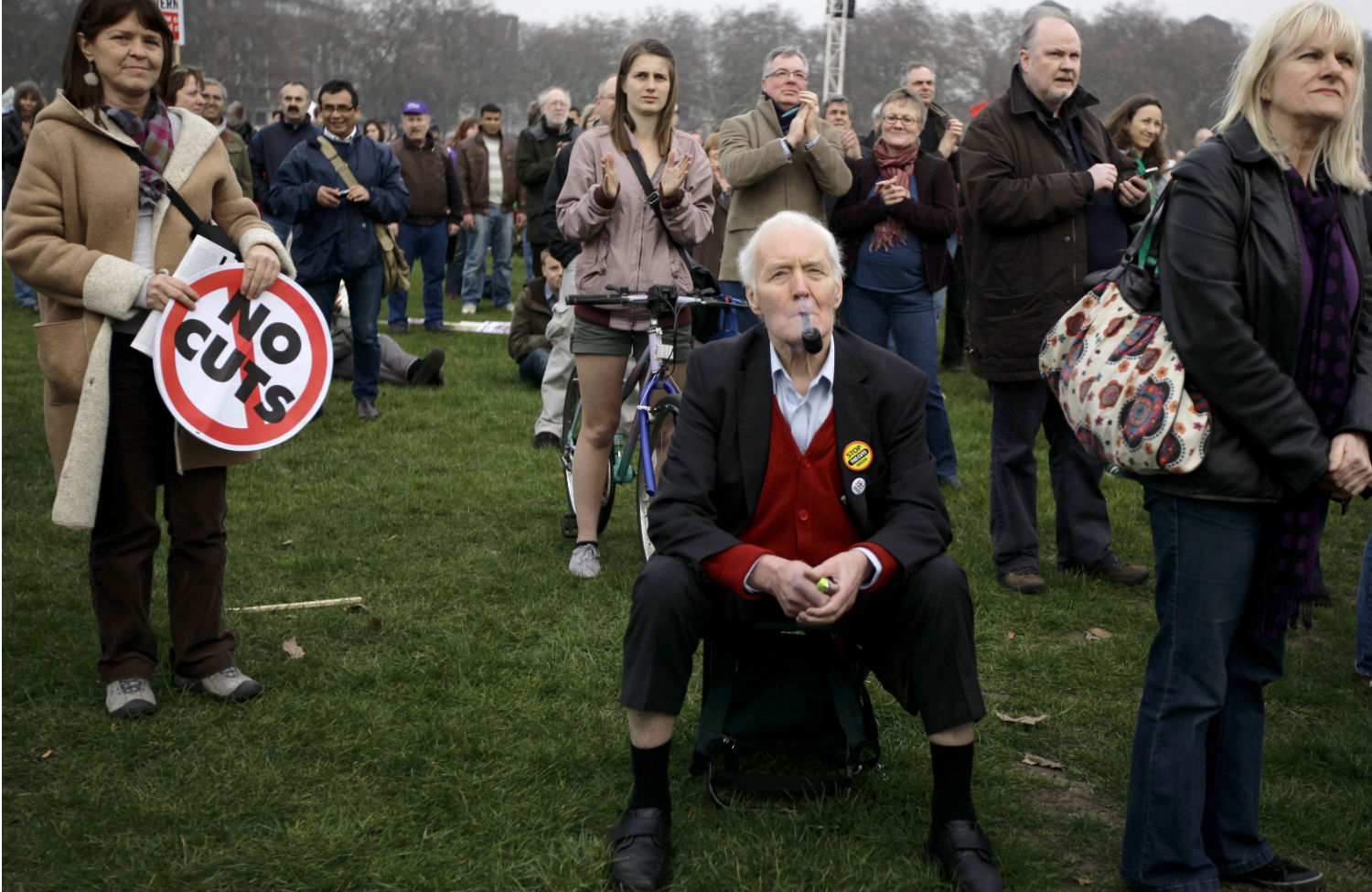 Although Tony Benn, the British politician who died earlier today, said a lot of things worth remembering, my personal favorite is his list of questions we should ask anyone in authority: “What power do you have?; Where did you get it?; In whose interests do you exercise it?; To whom are you accountable; and, How can we get rid of you?”

During the six months before I got fired as a writer on Newsweek’s foreign desk there were two stories where I was actually summoned by the magazine’s senior editors (known in house as “the Wallendas”) to explain myself. In writing about the removal of a “black spot” neighborhood in South Africa I had apparently been insufficiently attentive to the dangers posed by the “terrorists” in the African National Congress. More egregiously, in writing about the Chesterfield by-election, which sent Benn back to Parliament in March 1984, I had conspicuously failed to deliver the hatchet job ordered up by my editors. I can still remember my lead: “Something about Tony Benn makes the British press see red.”

The problem was that I had lived in Britain, and knew that whatever his failings, Benn in no way resembled the bogey-man described by Fleet Street—especially Murdoch’s Sun, which ran a front-page attack titled “Benn on the Couch” in which an American psychiatrist depicted him as a swivel-eyed lunatic. The funny thing was that in those days Benn wasn’t nearly as radical as he became later on.

Born to privilege—his father was a viscount, his grandfather a baronet who founded a successful publishing company—Anthony Wedgwood Benn (he was also related to the pottery Wedgwoods) enlisted in the RAF as a pilot during World War II, and then went to Oxford. Elected to Parliament in 1950 he was forced out after inheriting the viscountcy upon his father’s death in 1960, only to return in triumph following the passage of the 1963 Peerage Act, which allowed him to become the first member of House of Lords to renounce his title.

As a minister in Harold Wilson’s first cabinet Benn was in charge of “the white heat of revolution” in technology; he also famously launched a crackdown on pirate (unlicensed) radio stations. He later served as industry secretary and energy secretary in Wilson’s second term, where he raised wages for workers in nationalized firms and campaigned against Britain’s membership in what was then the Common Market (now the European Union) which he argued would inevitably be dominated by Germany.

Benn always said that the experience of high office is what radicalized him. With hindsight his decision to stand for deputy leader of the Labour party in 1981 against Denis Healey, the minister who had signed Britain’s agreement with the IMF, thus bringing the expansion of the welfare state to a halt, marked what was perhaps the last chance to stop the slide towards neoliberal decline. As Mike Marqusee writes, at a time when most Labour MPs, union leaders, newspaper columnists and even a significant portion of the British Communist Party chose accommodation, “Benn chose resistance.”

Of course, they hated him for it. From Michael Foot to Neil Kinnock to Tony Blair Labour’s leaders marginalized and patronized him, ridiculing his call for Britain to become a republic and ignoring his proposal that Labour’s leader should be elected by the party’s members. But they also feared him, because Benn represented not just Labour’s conscience but its soul—a living link to the radical England of the Levellers, the Chartists, the Suffragists and the Campaign for Nuclear Disarmament.

I can still remember the first time I heard him speak—at a benefit for the miners’ strike at Columbia in New York in the 1980s. He was eloquent, forensic, radical and unyielding, but what stayed with me—and still does—was the tremendous tenderness with which he listened to what I thought of as typical sectarian bullshit pseudo-questions, and the patient, comradely way he answered each one. So different from the macho posturing of most American leftists (at least in those bad old days).

When we moved to London I went to see him at the house in Holland Park where he worked, surrounded by his famous diaries—eight volumes have already been published—and still keeping up a blistering speaking schedule. When he left Parliament in 2001 he said he wanted “to spend more time on politics” and he meant it, becoming president of the Stop the War Coalition and opening the “Left Field” stage at the Glastonbury festival. He was generous, funny and surprisingly well-informed about American politics.

Ed Miliband, who interned for Benn when he was still in high school, was the first Labour leader in thirty years not to treat him like a pariah. Indeed, earlier this month Miliband finally pushed through the one-man-one-vote election for party leader Benn had proposed so long ago. “I did work experience with him at the age of 16,” Miliband

Running into Benn with his boundless energy, in his red sweater and union tie, was a highlight of every Labour Party conference. In an age where politicians seem to aspire to rock-star celebrity, Benn was something else: a superhero whose super power was to speak the truth. “Red cardy man,” as we called him in The Nation’s London bureau, was a model of what a deep sense of solidarity could give you. Tony Benn was the kind of politician who gives democracy a good name.