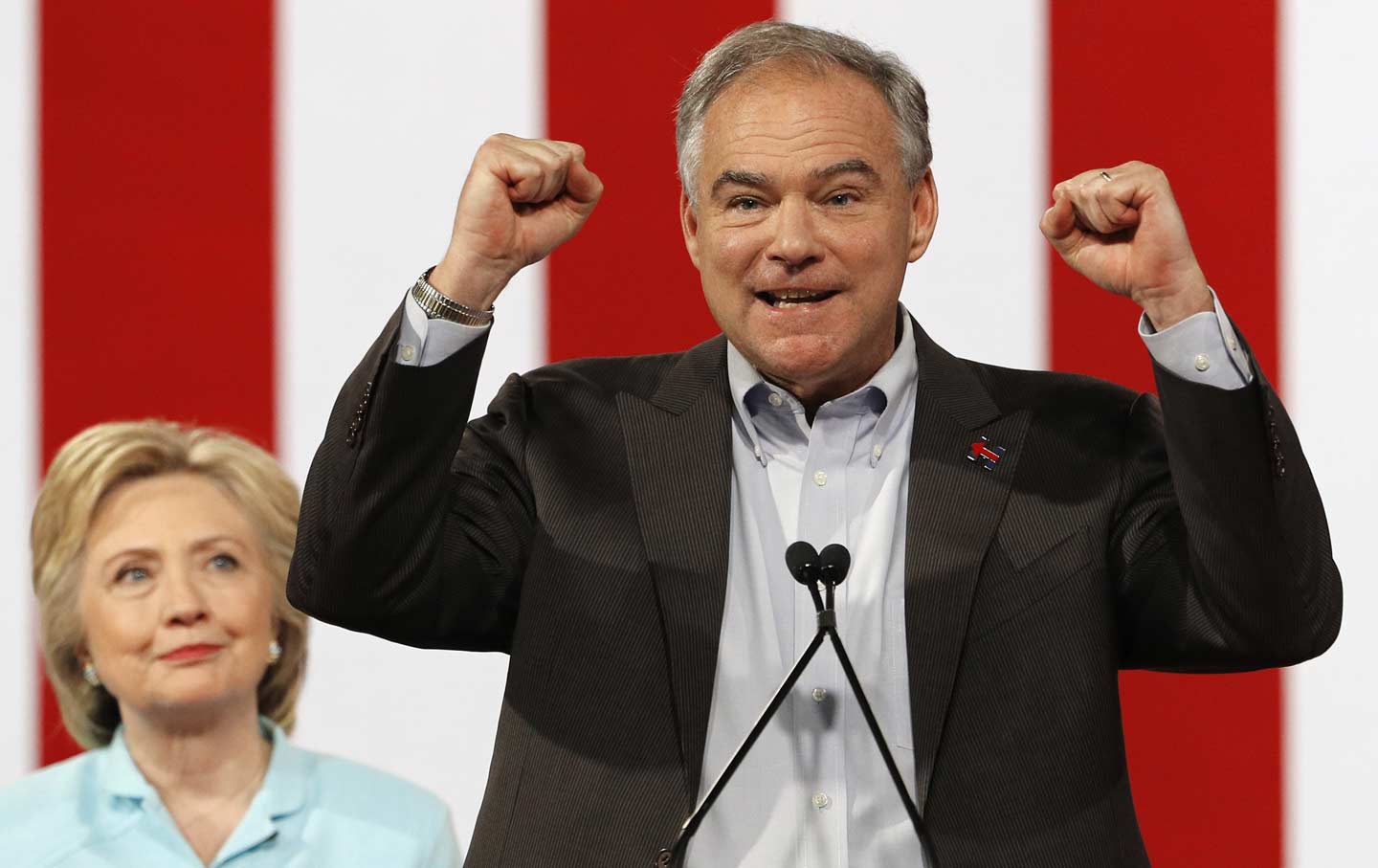 Hillary Clinton listens to her running mate, Tim Kaine, after she introduced him during a rally in Miami, July 23, 2016. (Reuters / Scott Audette)

So it’s Tim Kaine. Sigh. Like Mario Cuomo, Kaine is one of those Catholic politicians who says he is personally opposed to abortion but supports women’s right to choose. This is a popular position among ordinary Americans, but it’s out of step with the more assertive tenor of the pro-choice movement in recent years. Over at Rewire, Jodi Jacobson had harsh words: “The very last thing we need is another person in the White House who further stigmatizes abortion, though it must be said Clinton herself seems chronically unable to speak about abortion without euphemism.”

That seems a bit severe, considering that Hillary has made a banner issue of getting rid of the Hyde Amendment, which bars federal Medicaid funding for abortion. That’s a first for a presidential campaign and represents a triumph for the reproductive justice movement and its emphasis on real-life reproductive options for poor women. But Jacobson has a point when she notes that as governor of Virginia (2006–10) Kaine was not our friend. He supported parental notification and consent. He favored a “partial-birth abortion” ban. He pushed for “informed consent” procedures that, besides trying to persuade the woman to continue the pregnancy when really it is none of the state’s business, had the practical effect of making abortion access more cumbersome for both patient and clinic. NARAL did not endorse his gubernatorial bid, and no wonder.

Kaine’s positions were not lofty compromises: They made life harder for women at a difficult time.

These positions are not lofty compromises: They make life harder for women at a difficult time. (Imagine you were that teenager who couldn’t go to her parents: How would you feel about having to navigate the court system and discuss your pregnancy and your family situation with a judge? In a small town, that judge might be your Dad’s fishing buddy.) It’s kind of funny that pundits like Ed Kilgore at New York magazine credit him for moderation and reasonableness because the state’s notification and consent law includes a judicial bypass, as if that was Kaine’s generous, sane, humane idea, when it’s required by the Supreme Court. Ditto for the health exception he wanted for a ban on “partial birth” abortions. At the time, that was the law.

NARAL and Planned Parenthood have sent out celebratory press releases that focus on Kaine’s record in the Senate, where his rating from both organizations is 100 percent. Does that mean he no longer supports measures like the ones he promoted as governor? Perhaps he, like Hillary herself, is responding to the leftward shift of the Democratic Party and the newly energized pro-choice activism that’s caught fire in the past few years. Or perhaps he’s had his eye on the second spot for a while. On June 28, he signed up to cosponsor Richard Blumenthal’s Women’s Health Protection Act, which would prevent states from passing medically unnecessary requirements that hinder abortion access. The bill has been around since 2013, so this late conversion does seem a bit strategic. But if someone is doing the right thing, how much should we care that his motives may not be pure and his personal preferences not our own?

“I don’t think we’re in the business of thought policing,” Ilyse Hogue, head of NARAL, told me by phone. “I’m okay with people having their own ideas as long as they don’t prevent other people from exercising their right.” When I raised the question of whether Kaine would influence abortion policy in the Clinton administration, Hogue responded via e-mail, “Hillary has a history as a champion on reproductive freedom and abortion access when we’re at a crossroads on both. She’s carried that history and those values at the center of her campaign. Given that Kaine has promised to protect, but not really champion these issues, his choice as VP puts more onus of responsibility on her to push this mandate once elected, and I fully expect she will.”

I expect that too. I don’t know why Clinton chose Kaine, but I assume she figured that he would help her with moderate Democrats and Republicans in flight from Trump. To tell you the truth, after four nights of watching the Republican convention, I’d be fine if she picked her old role model, Lucifer. Kaine won’t excite the Democratic left, let alone the Bernie diehards, but I don’t think his selection is a signal to abortion opponents. I don’t see Hillary turning to Kaine on abortion issues, and I don’t see her backing off her strong support of reproductive rights. She is too closely embedded with Planned Parenthood, and with the larger pro-choice community. Politicians aren’t Lannisters, but they do have to pay a debt as important and public as the one Hillary owes to Cecile Richards and the pro-choice community.

“We don’t push the conversation forward unless we hold our friends to account.” —Kathy Greenier

But that doesn’t mean pro-choicers should give Kaine a pass. “We don’t push the conversation forward unless we hold our friends to account,” Kathy Greenier, a leading pro-choice activist based in Virginia, told me by phone. Greenier found the choice “uninspiring and deflating,” and added that she is “disappointed in major groups who won’t speak out on his record on choice in Virginia.” I pointed out that Kaine seemed to be capable of change—his Senate votes have been excellent, and as governor he began by supporting abstinence education but pulled the funding when studies showed it didn’t work. Right, said Greenier. “Why not push for him to change his position on parental notification and informed consent, just like he did on abstinence-only? I think we need to take every single opportunity to raise the issues that we have.”

If Hillary wins, I have no doubt the pro-choice movement will be doing a lot of that.