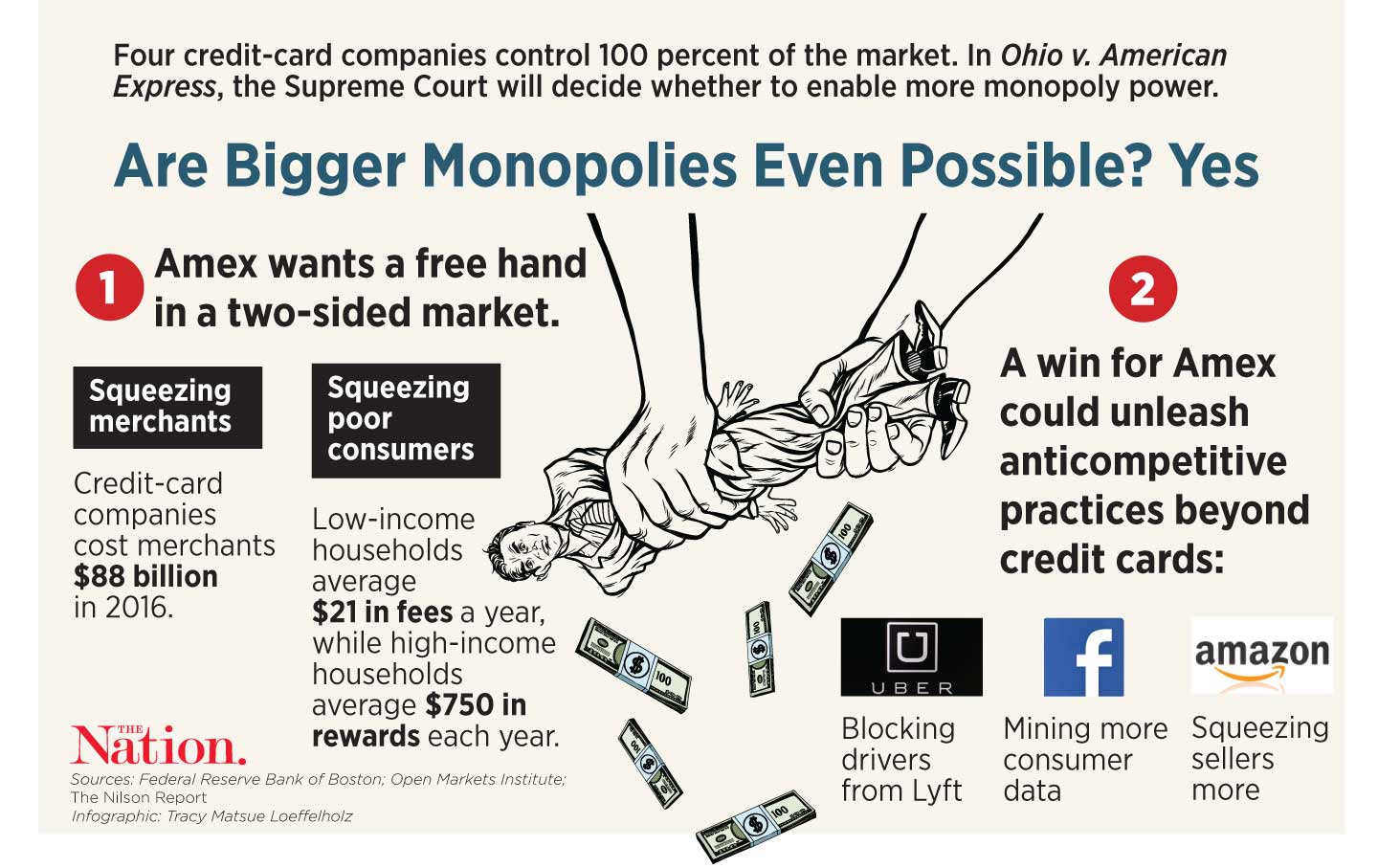 Right now, the Supreme Court is deciding the future of our economy. The most important case, of course, is Janus v. AFSCME, which will determine the future of public-sector unions. But there’s another, lesser-known case that could make it easier for giant corporations to control entire industries. Ohio v. American Express is a technical suit involving obscure credit-card fees. Yet the Court’s eventual ruling could undermine our ability to curtail monopoly power.

Credit-card companies sit between businesses and consumers, running the networks that allow the two groups to interact and charging businesses fees for the use of these networks. Four companies—American Express, Mastercard, Visa, and Discover—dominate this market. The contracts between credit-card companies and businesses contain clauses that forbid merchants to steer customers to one card or another through the use of prices. In short, businesses can’t offer you a better rate for choosing Visa over Mastercard, even if Mastercard offers them better terms, as a result of these private contracts. But in the case in front of the Supreme Court now, the state of Ohio argues that this is anticompetitive, because it prevents consumers and businesses from using prices to guide their economic activity.

American Express, meanwhile, argues that it can’t be anticompetitive because it is an intermediary, or part of a “two-sided market.” A concept developed by a handful of economists a little over a decade ago, the term tends to refer to markets where there’s a strong intermediary that offers different services to two different groups at two different prices, and where the success of one side’s experience depends on the experience of the other. In the case of credit cards, businesses use the market as well as consumers. So the credit-card companies offer their networks for free to consumers, and charge businesses to cover the entire cost.

Here’s the catch: American Express argues that Ohio has to show net harm to both sides of the market to make its case. This means, according to the company, that its actions squeezing businesses are fine as long as its cardholders benefit enough. But the case goes beyond those narrow confines: As the lawyers for Ohio and other states have argued, this structure exacerbates the lack of competition, since the businesses that use American Express don’t pay the entire cost themselves. Instead, merchants raise prices on their products to cover these fees—prices paid by everyone instead of just Amex users. 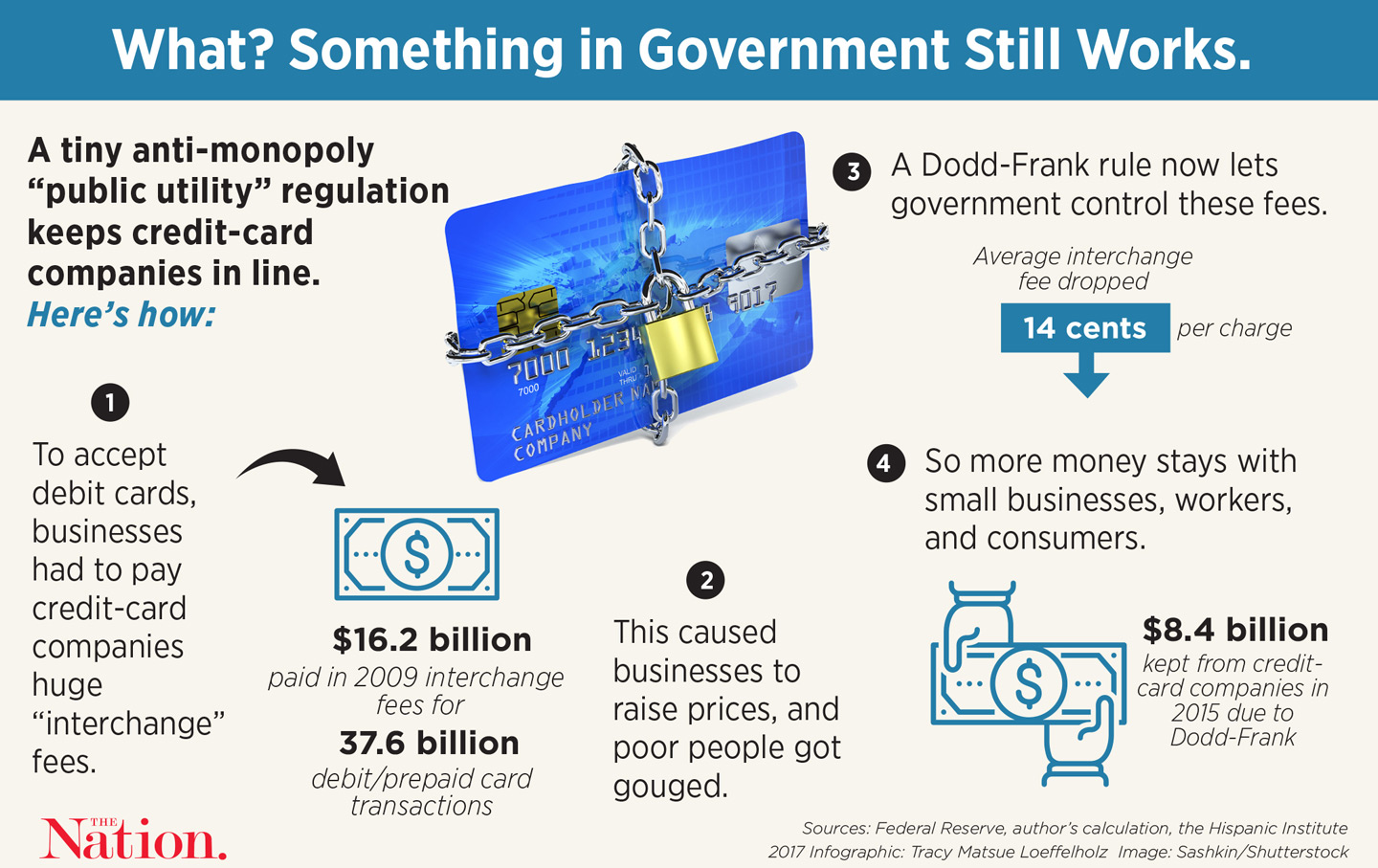 But in focusing on this argument, we ignore history. These kinds of markets are not new: As the pro-competition Open Markets Institute argues in a brief supporting Ohio, the courts have looked at cases involving newspapers, telephone companies, and computer operating systems throughout the past century. All of these could be identified as two-sided markets, yet the courts were able to examine their anticompetitive behavior using the traditional standards. Beyond that, the definition is so vague that firms could easily abuse it: Everyone from chicken processors to airlines could argue that limiting power on one side of their interactions could benefit those on the other.

But a more important reason for rejecting this argument is that it could prevent us from dealing with the large platforms that play an increasingly important role in our lives. Google, Facebook, Amazon, and Uber all have characteristics of a two-sided market. There’s a debate on what role antitrust should have in leveling the competitive playing field in their markets. Yet if the Supreme Court decides in favor of American Express, it would place an undue burden on those trying to restrain monopoly power, because these companies could argue that they can’t be abusive as long as they’re helping some set of customers.

The parallels between the Populist era and our own are striking. Both featured an increasing concentration of wealth and power built on the new technologies revolutionizing society. Yet one of the major achievements of the Populist era was the use of public power to regulate unfair practices, codified in the Sherman Act and other antitrust laws. We can’t afford to lose the capacity to do the same in our own era.