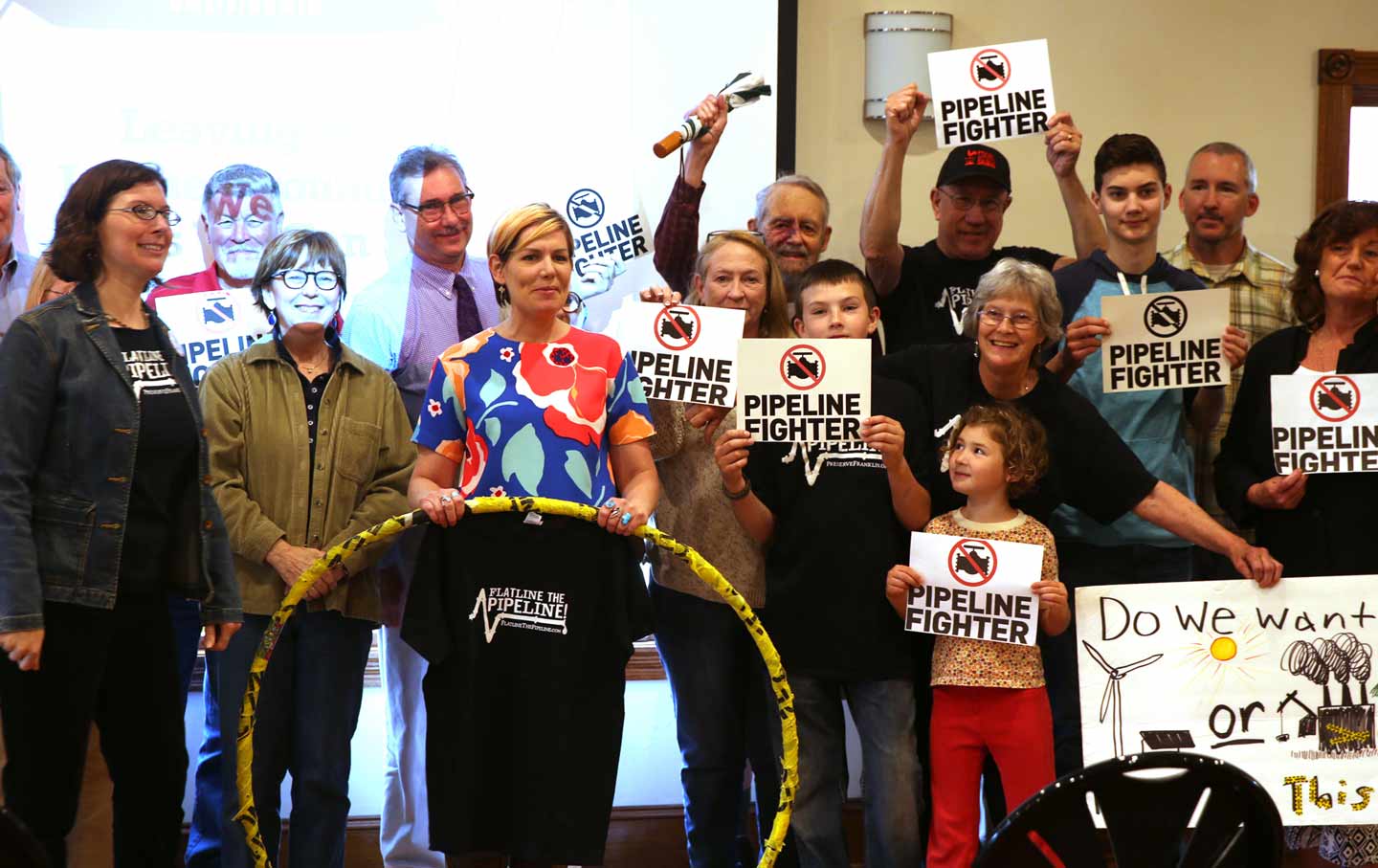 Since 2010, Jane Kleeb, a gutsy, high-energy activist living in the rural college town of Hastings, Nebraska, has helped Nebraska landowners channel their fury against the Keystone XL pipeline, and the Canadian company TransCanada, which planned to route the proposed 1,179-mile pipeline from Canada’s tar sands through the fragile Nebraska Sandhills. What began as a small political fight on the prairie grew into an environmental rallying cry uniting unlikely allies across the country, including a coalition of tribes, ranchers, and farmers calling themselves the “Cowboy Indian Alliance,” seasoned environmentalists and neophyte activists, major progressive organizations, Hollywood celebrities, and, ultimately, influential Democratic Party donors.

Since President Obama announced that his administration had officially nixed the Keystone XL project last fall, Kleeb decided she wanted to bring the lessons learned from pipeline fighting into electoral politics. Less than two weeks ago, she was elected chair of the Nebraska Democratic Party in what the Lincoln Journal-Star called a “tumultuous state Democratic convention.” Her ascendancy in the party is one indication that the fight over Keystone created more than a single-issue victory—it spurred the development of a political movement that has momentum beyond the pipeline. “We joke that the cowboy-and-indian Alliance that beat KXL is now leading the [Democratic] party on a very different path,” Kleeb says. But that movement doesn’t conform easily to traditional party politics, and it’s not yet clear how these activists might influence outcomes this election season.

For years, the economic and political might of coal, oil, and gas seemed like an intractable force. The industry has fought hard against many environmental regulations, especially restrictions on carbon emissions, stymied incentives to promote renewable energy, and given generously to the campaigns of elected officials. And at first, the Keystone campaign seemed futile—in winter 2011, most “energy and environment insiders” polled by National Journal insisted the project would move forward, even though the president had delayed its approval process.

Bold Nebraska, the progressive political organization Kleeb founded, stoked the rural Keystone XL fight, which was focused on concerns about water contamination and TransCanada’s property-rights violations, into a statewide battle. Bold also joined with 350.org, the international organization co-founded by author Bill McKibben to fight global warming, and an alliance of other major environmental groups like the Sierra Club and the Natural Resources Defense Council, student activists, faith leaders, indigenous groups, and other progressive organizations such as the NAACP. Together, they brought national attention to the Keystone fight and organized more than 750 protests all over the country, including demonstrations around the White House that resulted in hundreds of arrests. As the campaign drew supporters and built its muscles, it helped awaken and invigorate people all over the country who felt squeamish about the impacts of new fossil-fuel projects, whether because of their potential for accidents—as in the disastrous pipeline rupture in Michigan that tainted nearly 36 miles of the Kalamazoo River with diluted bitumen from tar-sands oil—or because of global warming.

The economics of fossil fuels still has much influence over environmental policy. For instance, last fall, two dozen states and a coal company filed suit to stop the president’s Clean Power Plan, which would put limits on carbon emissions from the power sector; and, in February, the Supreme Court temporarily blocked the regulatory program. But at the grassroots, the ranks of Keystone opponents and other anti–fossil fuel agitators have swelled into a vast, loosely connected network of activists across the country. Sometimes dubbed the “Keep It in the Ground” movement, the activists’ goal is to stop fossil-fuel extraction and push for a transition to a low–carbon energy economy based on renewables.

In many communities now, new fossil-fuel projects can meet strident resistance. On the West Coast, citizen opposition has blocked several US proposals to build new coal-export terminals, and last month a tribal nation defeated a project to construct North America’s largest-ever coal port, about 100 miles north of Seattle, Washington. Last year, the Portland, Oregon, City Council passed a measure to oppose all new projects that would transport or store fossil fuels. This spring, the energy company Kinder Morgan withdrew  a plan to build a high-pressure interstate natural-gas pipeline in New England after it faced citizen opposition and, in the company’s own statement, poor market conditions. It was one of at least two dozen fossil-fuel projects canceled in the six months after Keystone XL was axed, according to reporting by InsideClimate News.

Meanwhile, 350 has focused its efforts on curbing the political power of the fossil-fuel industry at every level of government. Bold Nebraska has now spun off state affiliate groups in Iowa, Oklahoma, and Louisiana, under a new umbrella organization called Bold Alliance. The Alliance runs campaigns to support property rights and fend off projects related to offshore drilling, fracking, and fossil-fuel pipelines, especially in rural areas and, in Kleeb’s words, “often overlooked” communities. Some environmentalists describe the ripples created by the anti-pipeline campaign as “the Keystone effect,” according to Karthik Ganapathy, a communications manager at 350. “I think the fact that we won Keystone gave a lot of people hope that we could stop projects all over the country and all over the world,” he says.

But until now, the anti–fossil fuel movement has rarely dived directly into party politics, focusing instead on pressuring politicians from outside the system. Now that’s changing. Bernie Sanders’s campaign has helped rally some members of this movement and carry their interests into the tent of the Democratic Party. Ganapathy, a millennial voter, took a six-month leave of absence from 350 to help run communications for Sanders, first in New Hampshire and then in New York and for the national campaign headquarters in Burlington, Vermont. Sanders also secured positions on the Democratic Party Platform Drafting Committee for five of his supporters, including McKibben. The committee met last weekend in St. Louis, and on Monday, McKibben rebuked the Clinton campaign in Politico magazine, noting that her supporters had voted against his proposals to include several climate concerns in official party policy, including a carbon tax and a moratorium on fracking. “In other words, the Clinton campaign is at this point rhetorically committed to taking on our worst problems, but not willing to say how,” he lamented. (In a response, former EPA administrator Carol Browner countered that McKibben held too narrow a view of the appropriate policy solutions to climate change.)

The Democratic Party is still an awkward fit for many of these activists, even Kleeb, who headed the Young Democrats of America a decade ago and worked with then-Senator Hillary Clinton to push for the inclusion of eating disorders in the Mental Health Parity and Addiction Equity Act. (Kleeb herself struggled with an eating disorder as an adolescent and is passionate about supporting measures to make treatment accessible.) But Kleeb supported Sanders in the Nebraska caucus and says Clinton, who once said she was “inclined to sign off” on Keystone XL as secretary of state, owes both Nebraska and tribal nations an apology. A year ago, Clinton rankled activists by hiring a former TransCanada lobbyist  as one of her campaign consultants.

Like the Sanders campaign, the Keystone XL battle picked up supporters who fit neither a traditional liberal nor conservative mold. Cindy Myers, a nurse from Holt County in Nebraska Sandhills, was a registered Republican before she began organizing meetings and attending protests against the pipeline in 2010. Her experience with Keystone left her feeling betrayed by that party. “The one thing I’m most sure of [is that] we can’t count on Republican leaders to help us fight pipelines,” she said. Now a fervent Sanders supporter, she helped run Holt County’s Democratic caucus this year and in 2012 and remains an active opponent of fossil-fuel projects, lending her support and providing testimony to campaigns in South Dakota against both Keystone and an interstate natural-gas pipeline. But when asked about Hillary Clinton, Myers hesitates, “Boy, that’s really tough…. I don’t like it that Hillary has some ties [to Wall Street].” Sanders supporters across the country have echoed her concerns, and the “Bernie Sanders’ Supporters” Facebook page, whose current profile picture reads “Only Bernie, #NeverHillary,” observed that “Sanders opposed the Keystone XL Pipeline since day one. Clinton did not.” Myers says she may eventually register as an independent.

Kleeb, who grew up in a staunch Republican household, insists that Bold Nebraska will also remain nonpartisan and notes that the group has conservative supporters. Still, she says that the organization’s grassroots efforts could help lead Nebraska in the direction of progressive populism.

This past Friday, the group learned about a new challenge to their hard-won victory: TransCanada announced that it is suing the United States for $15 billion over Keystone XL under international trade law, alleging that the project’s cancellation violated NAFTA. In a press conference on Monday, Kleeb was undaunted, arguing that the lawsuit is a teachable moment for the country about the problems posed by international free-trade agreements, which environmentalists say can undermine any laws and regulations that affect international trade. She vowed to give activists a chance to raise their concerns “in the streets.”

Kleeb also remains optimistic about the discord in the Democratic Party—she views it as a growing process. “There’s going to be several years of discomfort,” she says. “I think that the current leaders of the DNC should be embracing that discomfort and working through it and talking about it, rather than pretending it doesn’t exist, or labeling the Bernie folks as outsiders.”