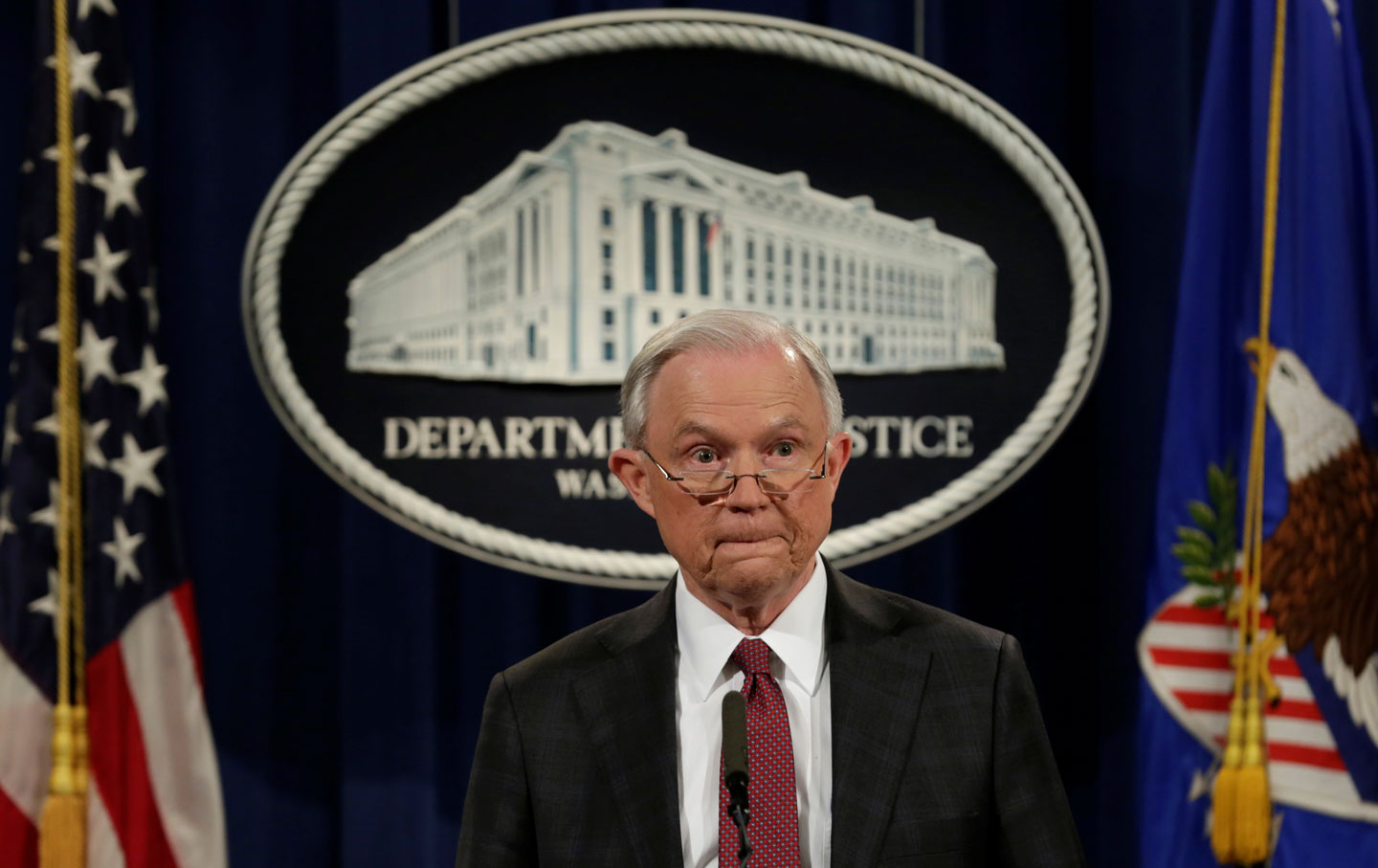 No one should lie under oath, but doing so ought to disqualify an attorney-general nominee from the job. However, that’s essentially what Attorney General Jeff Sessions admitted doing Thursday afternoon in a bizarre press conference where he announced he will recuse himself from Justice Department investigations into Donald Trump’s presidential campaign. Sessions’s explanation for failing to tell the Senate Judiciary Committee about his meetings with Russian Ambassador Sergey Kislyak raised more questions than it answered. His demeanor was at times oddly flippant and unprofessional—as when he said it was possible he discussed the Trump campaign with Kislyak, because “most of these ambassadors are pretty gossipy.”

Sessions seemed to be trying to head off perjury charges when he told reporters “my reply to the question…was honest and correct as I understood it at the time,” referring to Senator Al Franken’s inquiring about possible ties between the Trump campaign and Russian officials. “I was taken aback…by this brand new information…that a surrogate—and I had been called a surrogate for Donald Trump—had been meeting continuously with Russian officials.… in retrospect, I should’ve slowed down and said, ‘But I did meet one Russian official a couple of times, and that would be the ambassador.’”

In fact, Sessions wasn’t being asked about his own meetings with Russian officials. In the confirmation hearing, Franken summarized a news story that reported on a “continuing exchange of information” between Russian officials and Trump advisers, and then asked Sessions what he would do “if there is any evidence that anyone affiliated with the Trump campaign communicated with the Russian government in the course of this campaign.” In retrospect, Sessions’s dishonest answer is even stranger. “I’m not aware of any of those activities,” Sessions told Franken, adding, “I have been called a surrogate at a time or two in that campaign, and I did not have communications with the Russians.” Why Sessions chose to give an answer about his own contact with the Russians—when Franken hadn’t asked about that—is a mystery that we can only hope ongoing investigations will explain.

Sessions went on to describe one of his meetings with Kislyak, a scheduled sit-down in his Senate office with two senior aides there as well. He flashed back and forth between saying he couldn’t “recall” much of the meeting, and going into detail about their discussions of Ukraine. “To listen to him…Russia had done nothing that was wrong in any area, and everybody else was wrong with regard to the Ukraine,” Sessions recalled. “It got to be a little bit of a testy conversation at that point.” That’s a lot of information for a meeting Sessions seemed not to recall.

Moreover, the revelation that the Kislyak meeting was on his calendar, and that senior staffers attended with him, makes it even more remarkable that Sessions didn’t disclose it to the Senate Judiciary Committee—or go back and correct the record after he was “taken aback” by “brand new information” (which wasn’t at all new) about connections between Trump campaign officials and Russian leaders.

At the end of the day (literally), Sessions availed himself of the traditional comfort of embattled GOP politicians—he went on Fox News, where Tucker Carlson commiserated with him about those bad Democrats conducting what Trump calls “a witch hunt” against Sessions. The attorney general complained to Carlson that Democrats’ concerns about his Russian meetings have been “hyped beyond reason.” It’s one thing for Press Secretary Sean Spicer, or another Trump flack, or even a scandal-hounded senator, to find refuge in the bosom of Carlson; it’s entirely another for the nation’s top law-enforcement official to do so. It’s just another example of Sessions’s inappropriate partisan approach to the rule of law.

Of course, when writing about allegations about Trump’s ties to Russia, and the country’s alleged attempt to elect the Republican and harm the campaign of Hillary Clinton, it must always be said that the 17 intelligence agencies that have made that charge have offered little tangible evidence to back it up. That’s why an independent investigation into the charges is so crucial.

And that’s why recusal isn’t enough of an answer for Sessions. He will still run the Justice Department, which is in charge of the FBI, which is reportedly investigating Trump’s ties to Russia. That is too close for a top Trump surrogate who we now know met with the Russian ambassador twice, and twice answered “no” when asked about it by the Senate Judiciary Committee (Senator Patrick Leahy put the query to Sessions in a written questionnaire). Top Democrats in both the House and Senate have called on Sessions to resign. So far, no Republicans have joined them, but that may change.

Thursday also brought new revelations that not just Sessions but Trump son-in-law and top adviser Jared Kushner, along with foreign policy advisers Carter Page and J.D. Gordon, all met with Kislyak last year—after Trump himself, and most top administration officials, strenuously denied any such meetings. Let’s also remember Michael Flynn had to resign as national-security adviser over his own conversations with Kislyak, and his lies about it. It’s clear this issue will continue to erode the already-shaky foundation of the Trump administration.