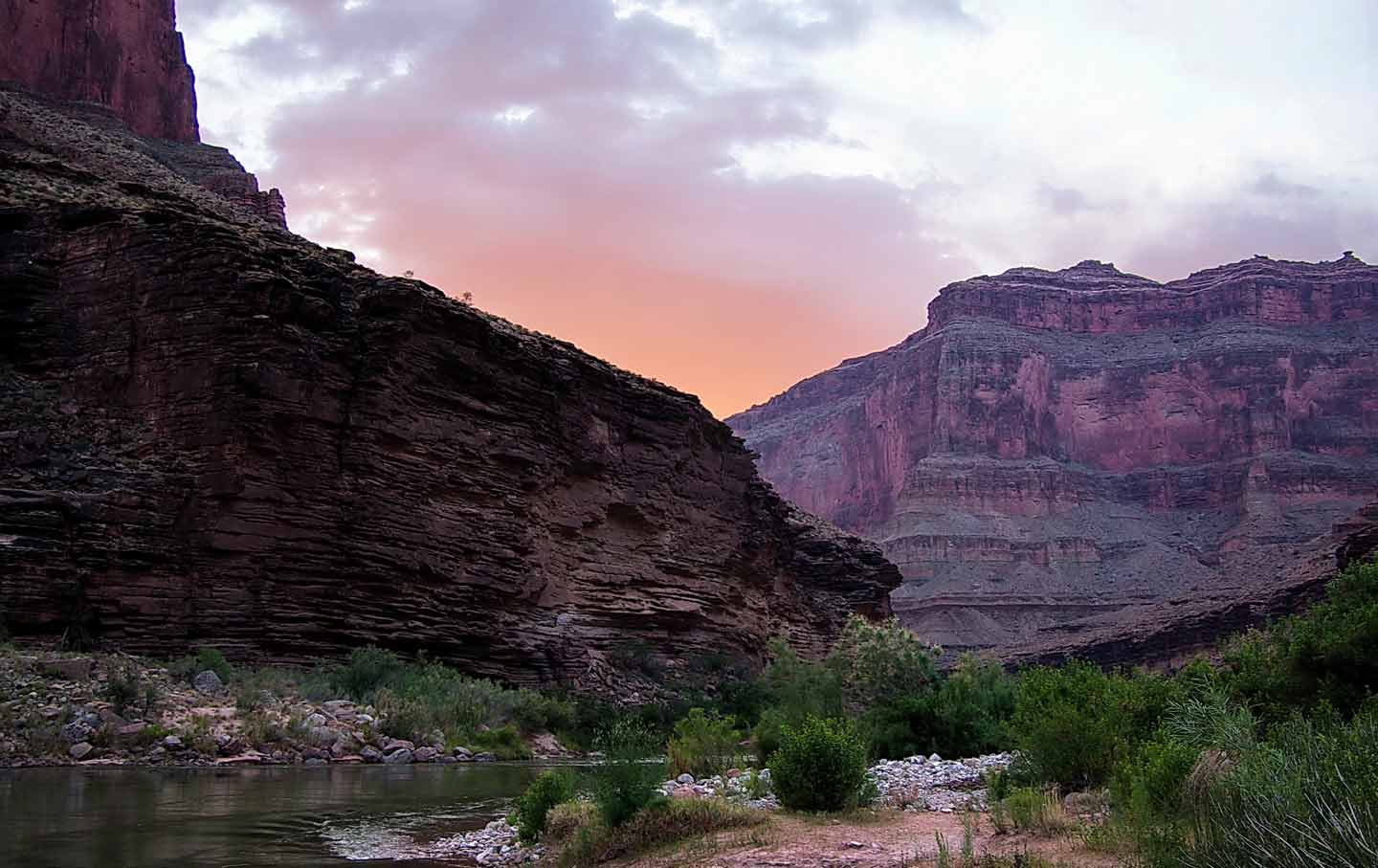 Sunset over the Grand Canyon, one of the American landmarks impacted by the Land and Water Conservation Fund Act. (AI_HikesAZ, CC BY 2.0)

September 3, 1964, is a holy day in the history of the American environmental movement. In the White House Rose Garden on that late summer morning, Lyndon Johnson signed two unprecedented and broadly bipartisan bills into law. The first was the Wilderness Act, now beloved and well known, which established a system of protected lands across the nation for the use and enjoyment of the American public. The second bill, lesser known though equally important, was the Land and Water Conservation Fund Act. It established a pool of money, drawn from offshore oil and gas royalties, meant to expand and sustain a crucial American institution: the public lands, the many millions of acres that local, state, and federal agencies manage on behalf of the American people.

The Land and Water Conservation Fund, or LWCF, quickly became a wildly successful pillar of this country’s conservationist infrastructure. That baseball diamond or public playground you played on as a child; that hiking trail in the hills, Civil War memorial or expanded national park nearby—chances are the fund helped create them.

“I believe the significance of this occasion goes far beyond these bills alone,” said LBJ, when he signed the fund into law. “In this century, Americans have wisely and have courageously kept a faithful trust to the conservation of our natural resources and beauty.” And that faithful trust continued for more than fifty years, until it finally broke down this fall.

LWCF is "the greatest conservation program that no one has ever heard of. That's why it's easier for...Bishop to dismantle it." — Amy Lindholm

In September, in an act of stunning legislative arrogance, LWCF was taken hostage by rabid anti-conservationist Congressman Rob Bishop, a Republican from Utah and Chairman of the House Natural Resources Committee, who blocked the fund’s routine renewal. Without any kind of debate or deliberation, he single-handedly cut the cord that funneled Big Oil royalties to worthy conservation projects across the country. Before gutting the fund, Bishop released a statement that railed against the “[s]pecial interests that seek to hijack the LWCF to continue to expand the federal estate….”

“Under my chairmanship,” he warned, “the status quo will be challenged.”

Like any good hostage taker, Bishop has since offered conditions under which LWCF might live: he will renew the fund if it is remade in his Tea Party image. And so he recently unveiled a draft bill, called the Protecting America’s Recreation and Conservation Act (PARC Act), which would amend—and partly mutilate—the original LWCF legislation. The first full committee hearing on the bill is today, November 18th.

Bishop has billed the PARC Act as a “common-sense” effort to channel more of LWCF’s money toward state and local projects, which is not a particularly controversial goal. But beneath his aw-shucks talk of “reform” and “true intent” is a radical agenda that would pervert the LWCF by channeling at least 20 percent of its funds back to the oil industry for offshore energy exploration, oil industry innovation, and oil-worker education. As serious, it would slash the portion of LWCF funding that could be used to purchase new federal lands and all but block its ability to acquire land in the American West (an area that includes Bishop’s home state and is under particular pressure from oil interests and developers).

The origins of the Land and Water Conservation Fund track back to the heady days of the early 1960s. Spearheaded by Interior Secretary Stewart Udall and Senator Frank Church of Idaho, with an assist from wilderness activists like Margaret Murie, the LWCF was part of the environmentalist thrust of Lyndon Johnson’s Great Society reforms. In the five decades since, it has touched the lives of tens of millions of people. According to the Department of the Interior, grants from the fund’s state program have sponsored more than 41,000 projects—at least one in every county in the United States. Its endangered species initiative has spent $394 million to help private landowners and green groups protect imperiled animals. Most important, LWCF has helped preserve nearly 5 million acres of federal public land, from Gettysburg National Military Park to the Grand Canyon. Despite Congress’ marked tendency to raid LWCF’s coffers—in recent years, it has appropriated only a fraction of its funds for actual conservation projects, with the rest going to unrelated funding—the list of its accomplishments goes on and on.

“It’s the greatest conservation program that no one has ever heard of,” says Amy Lindholm, the Land and Conservation Water Fund director at The Wilderness Society. “That’s why it’s easier for someone like Congressman Bishop to dismantle it.”

LWCF has done all this without asking anything of the average taxpayer. The fund was budget neutral, as policy wonks say. Its money—$900 million a year when fully funded—comes from royalties on oil and gas drilling on the Outer Continental Shelf, the federally managed underwater domain along US coastlines. It is Big Oil’s way of paying for the privilege of drilling on our land and waters.

Neither the fund’s budget neutrality, nor its many achievements, seem to matter to Bishop or his anti-government colleagues. The lawmaker has vaguely denounced LWCF as an Obama administration “slush fund” and complained that the bill has “drifted” from its initial intent. Mostly, though, Bishop hates that the LWCF supports what he describes as “unfettered federal land acquisition.” That’s what this fight is really about. In attacking LWCF, Bishop wants to undermine the federal public lands.

The public lands, and especially the federally owned holdings, are a fundamentally progressive institution, a great and successful socialist experiment (like the Post Office or Social Security) that we take for granted. They provide clean water, healthy forests, thriving wildlife and recreation land that we, the people, own and manage. What’s more, they are the bedrock of this country’s conservation movement. The founders of that movement—people like Bob Marshall, Aldo Leopold, Murie, and even Rachel Carson—were concerned primarily with public lands and the wild creatures that inhabit them. The political organizations and influence they built in order to defend wild landscapes eventually gave rise to modern environmentalism, concerned as it is with water and air pollution, environmental racism and climate change. But it began with land.

LWCF is just the first program on the anti-conservation hit list. If it isn't revived, we'll watch other great ideas follow it to an early grave.

The far right understands the value of these lands—their economic value as a source of oil, metal and timber, their symbolic value as a public commons, and their political value as a progressive institution. That’s why it is trying to erode the laws and regulations that sustain them. In recent years, the Republican Party has launched unprecedented assaults on the Endangered Species Act, pushed hard for more oil and gas drillings on public lands, and, worst of all, lent its support to the land transfer movement. That movement, led by lawmakers in Bishop’s home state of Utah, hopes to use legislation and the courts to transfer ownership of hundreds of millions of acres of federally-owned parcels to the states, where Republican legislatures will be able to sell or lease them to the highest bidder.

The political left, especially its urban base, must recognize the attack on public lands for what it is—an attempt to eradicate one of its most important legacies. Many in Congress are trying their best to free LWCF from Bishop’s grip, before the fund finances start to dwindle. In the House, Representative Raúl Grijalva has introduced a bill that would make the LWCF permanent. It has 195 co-sponsors, including 23 sensible Republicans. In the Senate, Maria Cantwell has introduced a bill that permanently reauthorizes the fund and, crucially, mandates a full $900 million annual funding package for the program. Many LWCF supporters see an opportunity to attach these or similar bills to whatever must-pass legislation comes out of the upcoming federal budget negotiations in December. If they succeed, they will have put the brakes on the far right’s disastrous, anti-conservation rampage before it gathers more momentum.

Realistically, though, Rob Bishop is in a strong position. He has a veto, more or less, over LWCF. Unless the House leadership breaks rank with him, the program will continue to be his plaything.

Make no mistake: LWCF is just the first land and wildlife program on the anti-conservation hit list. If the fund isn’t revived and the precedent reversed, we’ll one day watch other great ideas—the Endangered Species Act, the Wilderness Act, the Antiquities Act—follow it to an early grave.