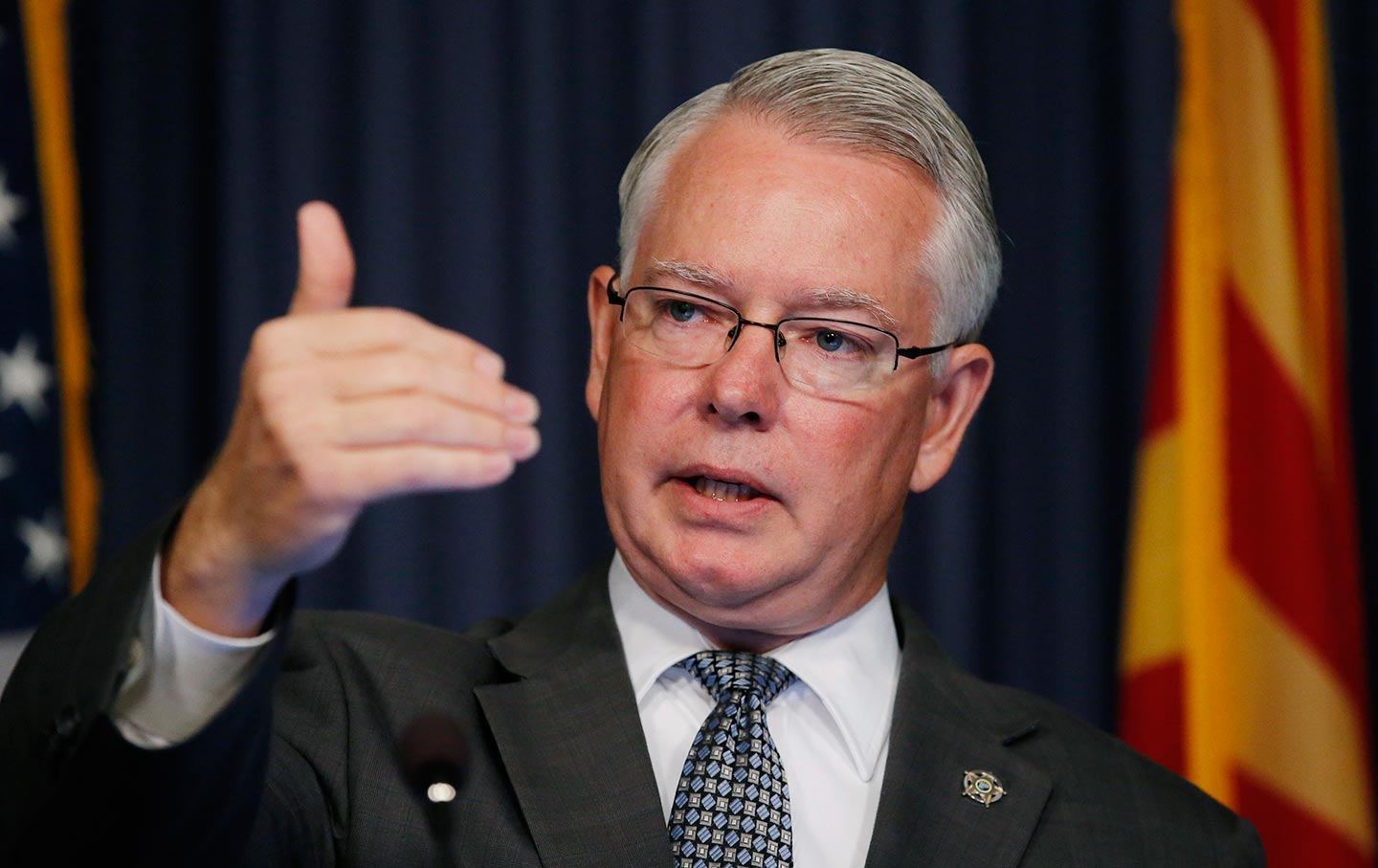 At an open debate in March of 2015, Bill Montgomery, the county attorney of Maricopa County, Arizona, argued vehemently against the legalization of marijuana, referring disparagingly to “potheads” who were a “drag on this country.”

Don Ream, a white-haired Vietnam veteran who had helped commission a Navy Explorer, was offended. He explained to Montgomery that he legally used medical marijuana for back pain and admitted to using pot recreationally, but did not appreciate being called a “pothead.”

Perhaps he thought that Montgomery, who brags about his military service in the Gulf War, would understand.

Later, when confronted by reporters, Montgomery doubled down, calling Ream “an enemy of our constitution,” as if the founding fathers had ideas about cannabis.

Over the last year, Bill Montgomery has decided that he has an enemy: legal marijuana. Prop 205, which is on the Arizona ballot this fall, would make recreational marijuana legal. (Medical marijuana is already legal in Arizona.) To that end, he has been focused on the issue to the apparent exclusion of everything else in his administration. He’s likened vendors at a medical pot expo to “cartel members.” His Twitter feed is filled with anti-marijuana propaganda and scare stories about children who have eaten THC-laced gummy bears. (While anti-marijuana advocates like Montgomery have made much of a JAMA study about kids eating pot, children are much more likely to eat cleaning products, crayons, and cigarettes, all things Montgomery has not suggested banning.) In the same March debate where he insulted a veteran, he also argued that legalization was against the US Constitution and was in opposition to Christianity, which he supported by comparing the promise of legal marijuana with Satan and the apple in the Garden of Eden.

Not a particularly experienced trial lawyer (he’s tried only about 20 jury trials), Montgomery followed on the heels of his disgraced former boss Andrew Thomas, who was actually disbarred in 2012 for using his political office to go after opponents. Montgomery, elected for the first time in 2010, in many ways presented a refreshing change despite his flair for political drama.

A group backed by George Soros is supporting Montgomery’s Democratic candidate for county attorney, a group that Montgomery accuses of being “dark money.” (It’s not.) He even filed a complaint against the group, which is called Arizona Safety & Justice.

Montgomery himself has received questionable revenue from his own practices of sending first-time drug offenders to mandatory treatment. According to a recent investigation by The Arizona Republic, Montgomery’s office may lose millions of dollars should Prop 205 pass. It turns out that, over the last decade, Montgomery’s office has collected nearly $15 million referring people to TASC, a private drug-treatment company. TASC is basically an option offered to those facing a first-time drug felony. For $1,000, someone can get checked into counseling instead of jail. Of that $1,000, $650 goes to Montgomery’s office.

While Montgomery argues that the TASC is for all sorts of drug treatment (along with his argument that pot is a gateway drug), The Arizona Republic found that three-fourths of clients admitted to TASC were facing marijuana charges. So, no matter how speculative the math is at this point, it’s clear that Montgomery does have some financial interest in ensuring that pot users get caught, making his political position all the more disconcerting. Montgomery, in a trend of bad sportsmanship and lack of respect for the political process, even filed a lawsuit to try to stop Prop 205 from appearing on the ballot.

In response to The Arizona Republic’s story on how much Montgomery’s office stands to lose should Prop 205 pass, Montgomery wrote his own op-ed where he argued that his office should be commended for diverting people to treatment and continues to perpetuate the notion that supporters of Prop 205 see these people as “potential customers.”

What’s unusual about the entire debate is that Montgomery is involved in it at all, acting as the movement against Prop 205’s best advocate and spokesperson, advancing the same arguments that Prop 205 will increase drug use and other fallout problems, like homelessness, child abandonment, and unemployment. (TASC, the drug-treatment company, also, unsurprisingly, opposes Prop 205.) Montgomery and his anti-pot supporters have been using Colorado as his prime test case so much so that Colorado officials have asked them to please stop because his comments were misleading. Generally, prosecutors try to remain outside of the political limelight—their job is to enforce the laws that exist, not make them—but Montgomery takes to the anti-pot trail like a pink-faced political opportunist.

He’s even gone so far as to stretch the limits of the law to prosecute legal medical marijuana in fringe cases, like that of a man who had one THC-laced candy in his car that was questionably legal under the Arizona statute. (The statute is ambiguous about extracts for medical use.) The very real threat of Montgomery’s anti-drug wrath caused the parents of an epileptic little boy to bring a lawsuit for clarification as to the low-THC marijuana extract their son needs for relief. They won their suit.

Sick little kids who use drugs aren’t the only ones who earn Montgomery’s scorn. His Twitter feed is full of the typical anti-Obama and anti-abortion propaganda. But he also dangerously allies himself with individuals identified as hate groups who encourage people to actively discriminate and commit acts of violence against Muslim communities.

In 2014, he spent $40,000 to bring an ex-FBI and anti-Muslim agitator John Guandolo to Maricopa County to train local prosecutors and cops in supposed anti-terror strategies. Guandolo is a controversial figure, to say the least. Long labeled a dangerous extremist by the Southern Poverty Law Center, Guandolo left the FBI in 2008 with his tail between his legs after having sex with a confidential informant and peddles unusual conspiracy theories about Muslims infiltrating the government.

The event was so controversial that Montgomery was even criticized by conservative stalwart Fox News, and the Maricopa County Sheriff’s Department refused to attend. Guandolo called the newscasters covering the protests over the event “stealth jihadis”; one of those so-called “jihadis” was hired by the Arizona attorney general to be his communications director. There were also increased threats to bomb mosques in the week leading up to the conference.

While Montgomery seems to say little publicly about Muslim communities and terrorism, he is fond of retweeting the feed of Dr. M. Zuhdi Jasser, a controversial figure who is a darling of right-wing talk shows when people need a Muslim voice to support anti-Islamic ideology. Dr. Jasser received money from conservative financiers and has testified in support of spying on Muslim communities at Senate hearings at a pro-NYPD press conference.

To focus on marijuana and anti-Muslim extremism might be to sell Montgomery short. He has proven to have many other talents that place him in the pantheon of tough prosecutors who rise to the level of laughable irrationality. He is, after all, the same man who prosecuted a black woman in 2014 for leaving her kid in the car as she went on a job interview, while he went comparatively soft on a very high white woman who left her infant on the roof of her car and drove off. He is being sued for $2.5 million for going after an innocent guy for the I-1o shooting last year—Montgomery’s office was so excited to indict that prosecutors neglected to show the grand jury evidence that showed the “suspect” couldn’t have done the shootings. Montgomery also told the widow of a man murdered by the police that the public outcry for the shooting video was insincere and just a group of media people who wanted to take emotional advantage of her. “They don’t care about you,” he reportedly said on tape.

And while Montgomery is a change from his disgraced predecessor, he maintains that his office does not commit misconduct, even though a study from Harvard Law School’s Fair Punishment Project found that Maricopa County leads the nation in death sentences, nearly a quarter of which involved misconduct by the prosecutor’s office. Montgomery has also stood beside one of his line attorneys, Juan Martinez, who was found by the Arizona Supreme Court to have committed misconduct in three capital cases. Martinez was also just placed on probation by the Arizona Supreme Court for his history of misconduct. Montgomery’s view on prosecutorial misconduct is dismissive as might be expected; he argued bizarrely in an op-ed in The Arizona Republic that a recent series on prosecutors was “conflating impropriety with misconduct.”

Montgomery’s fellow supporter of anti-immigration policies, Sheriff Joe Arpaio, famous for supporting discrimination against all people who might look brown and for being oddly obsessed with jail inmates’ underwear, is now facing serious trouble for the first time in his political career as the subject of a civil-rights criminal investigation for his unconstitutional discrimination against immigrants. Ever the sore loser, just this week he has tried to have the judge removed from his case as another delay tactic. He’s also complained that a Soros-backed group named Maricopa Strong is violating election laws, although there’s clear evidence they are not.

It’s possible that this might mean trouble for both of them, which would be a real upheaval in Maricopa County, long one of the last bastions of a peculiar kind of rugged “tough on crime” ethos in America. Much like Trump, both Arpaio and Montgomery will likely wait until the results of their elections are in before they decide if they have more lawsuits to file.

A previous version of this article stated that the Maricopa County Attorney’s office was responsible for the prosecution of Mahin Khan. It was in fact handled by the Arizona Attorney General. We regret the error.