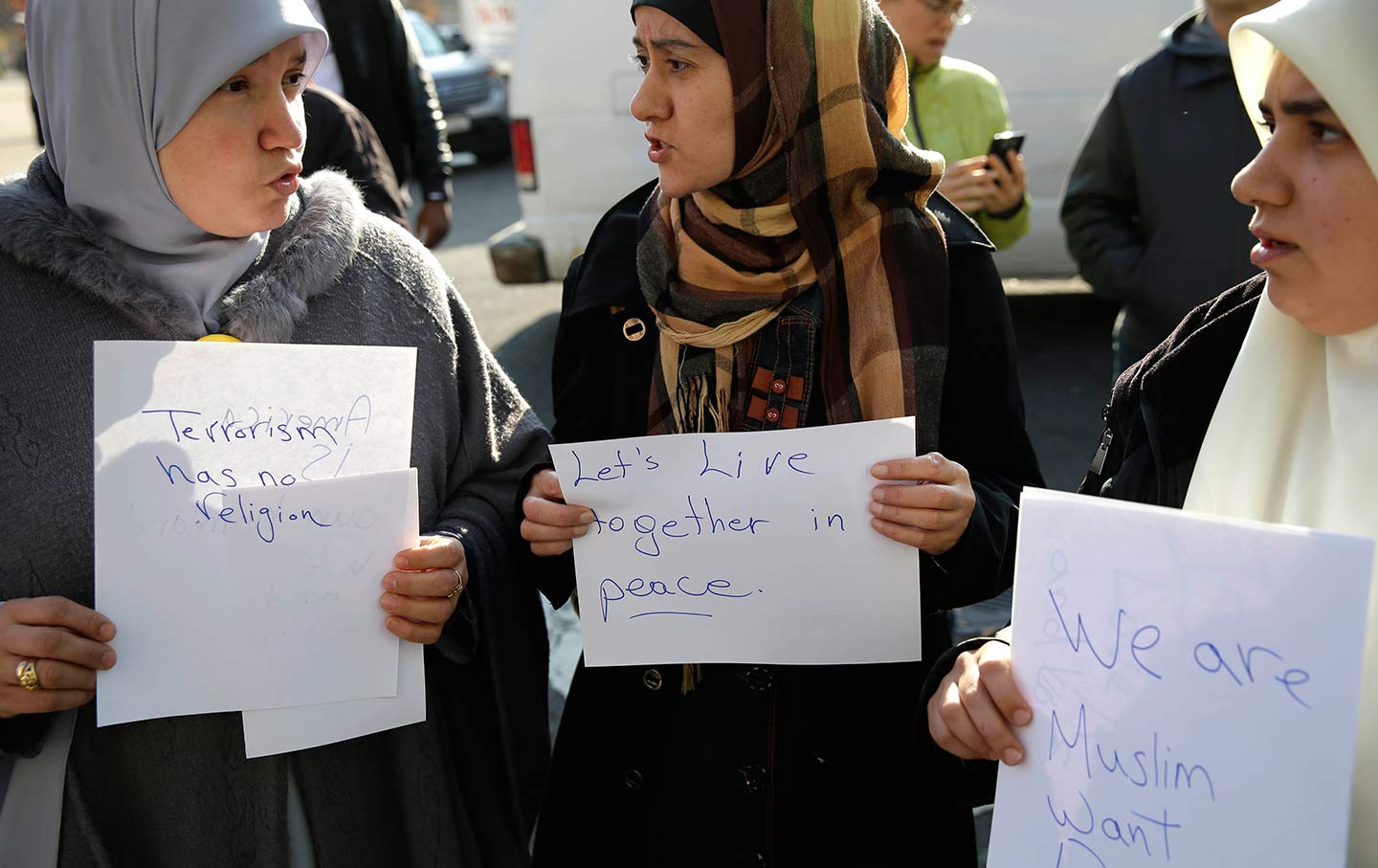 Taif Jany is a rising young policy expert who was born and raised in Iraq and now lives in Washington, DC. His family is Mandaean, not Muslim, but his birthplace and brown skin make him feel like a target all the time. He sometimes looks over his shoulder when he walks through DC, where he works as policy coordinator for the Young Elected Officials (YEO) Network Action, a program of People for the American Way. Over the last year, his feelings of insecurity have only gotten worse.

“Personally I feel intimidated when I walk around the street,” said Jany. “I feel like I’m an easy target, even though I’m not Muslim. I hear from some of my Muslim friends about daily harassment in cities, suburbs, everywhere.”

And that was before Donald Trump won the presidential election.

Jany and his friends have good reason to be scared. Muslims, along with Arabs and South Asians more broadly, are under assault in the United States. While anti-Muslim bigotry has a long and grotesque history in this country, the shape and nature of the bias has intensified during the last few years, with Muslims suffering the fallout in deeds as well as words. In 2015, 78 mosques were targeted for arson or other forms of vandalism, more than triple the number of mosques targeted in the two years prior. Since 2010, ten states have passed “anti-Sharia” laws, with a majority of the rest pushing to add “anti-Sharia” measures to their books, never mind the fact that Sharia poses zero threat, legal or otherwise, to American constitutional law. And hate crimes are on the rise across the country, with official reports of anti-Muslim crimes jumping from 154 in 2014 to 174 in 2015.

Then there is the rhetoric—poison-tipped words and proposals deployed, not merely by fringe-racist characters like Pamela Geller but also by leading political figures who have turned Muslim bashing into campaign-season sport. Trump has rightly garnered the most attention with his pitch for a “total and complete shutdown of Muslims” seeking to come to the country, followed by the allegedly toned-down version of that pitch—his call for “extreme vetting.” He has also said he would “implement” a database to track Muslims. But he has hardly been the only one to embrace bigotry. Almost all of his Republican primary competitors trafficked, at some point or another, in anti-Muslim slurs, with Ben Carson comparing Syrian refugees to “rabid dogs” and Mike Huckabee describing Muslims as “uncorked animals.” And such rhetoric hurts; it has real, often violent, consequences. One recent Georgetown University study found that anti-Muslim attacks corresponded with calls from prominent politicians to ban Muslim immigrants.

That’s why Jany, along with hundreds of politicians and local leaders across the country have begun pushing back. Under the aegis of the American Leaders Against Hate and Anti-Muslim Bigotry Campaign, progressive officials at every level of local government have begun introducing legislation and pressing for policies that combat Islamophobia. From school-district initiatives in California and elsewhere that require schools to monitor religious bullying, to advertising and education campaigns in cities like New York that aim to teach non-Muslims about Muslim communities, local officials are joining forces with Muslim constituents to show what true leadership looks like. In the last month alone, the city councils of Columbus (Ohio) and New York City passed resolutions condemning Islamophobia—and affirming support for Muslim communities.

“We were regressing into more and more Islamophobia,” said Daneek Miller, who represents southeast Queens as the New York City Council’s only Muslim member and who helped pass the New York resolution. “These last six months or so, with Trump, have made things worse. We had to do something to reverse the trend.”

These new efforts are taking root in cities and towns across the country, creating oases of tolerance in some of the most unlikely states. In Kansas City, Missouri, the school board recently passed a resolution that condemns hate speech against Muslims and those who might be mistaken for Muslims, and explicitly supports its Muslim students. The Metro Nashville Public School Board in Tennessee adopted a similar resolution on October 11.

The American Leaders Against Hate campaign is the joint creation of Local Progress, a network of hundreds of progressive local officials, and the YEO Network Action, which came together earlier this year in the hope of transforming isolated local initiatives into a national platform against Islamophobia. Even before the campaign began mobilizing officials, the occasional mayor or city council would attempt isolated interventions. (In Muncie, Indiana, home state of Trump running mate Mike Pence, for instance, the City Council passed a unanimous resolution promoting religious freedom this past March.) Since the campaign’s launch, these interventions have accelerated rapidly in number as well as kind.

The campaign has thus far come up with about a dozen policy solutions to reduce Islamophobia. Some of them are relatively easy lifts that can be done on a local level. For instance, school districts can write into their bylaws explicit support for Muslim students, and a commitment to hold those who discriminate based on race or religion accountable for their actions. Many school districts have begun to take bullying more seriously; the American Leaders Against Hate campaign suggests being extra-vigilant about bullying based on religion or skin color, including a formalized tracking system for incidents.

Schools can also work anti-bullying and pro-diversity information into their curricula. They can train teachers and guidance counselors to not only know more about Muslim cultures but also to know how to spot bias within themselves and their students, and how to deal with it. While these measures are relatively minor tweaks on their own, together they add up to providing more inclusive environments for Muslim kids and others whose place of birth or religion make them susceptible to Trump-style bigotry.

Other policy changes, such as establishing anti-profiling measures for police, will need to clear more hurdles. But the first step toward clearing those hurdles is to get local elected leaders together to create a national platform capable of tackling bigger issues. The American Leaders Against Hate campaign, for instance, has recommended that states curb surveillance, which disproportionately affects Muslim communities. In the age of NSA data mining, that might be a big ask, but local officials are already making some headway. In June, Santa Clara County, California, passed a landmark ordinance that will help inform citizens about new technology the government is using for policing and surveillance, and make the legal framework for using those technologies transparent and open for debate.

While many of the efforts have been warmly received, a few have run into the buzzsaw of anti-Muslim hysteria either during or after their passage. In Kansas City, for instance, the school-board resolution condemning anti-Muslim hate speech caused an uproar that spread well beyond the city. Despite the fact that the resolution doesn’t require any major changes to school curricula, conservative websites warned of “creeping Sharia law,” and the school district received thousands of angry, sometimes violent, e-mails, many originating from an extremist group called Act for America. The barrage was so intense that the school district had to set special e-mail filters so that its employees could conduct normal business.

That backlash, Kansas City Board of Education chair Melissa Robinson said, was further proof of the amount of work needed to combat Islamophobia. “It’s an illumination of the hate that’s going on around our country,” Robinson said. “As an African-American woman, thinking about the history of what it means to be black in this country, I can relate to what they’re going through in a very deep way.”

Robinson says Kansas City Public Schools joined the American Leaders Against Hate campaign because they understood that Islamophobia wasn’t limited to the city’s school district. The campaign allows local action, like the kind Robinson is doing in Kansas, to have national impact.

Progressives at every level of local government have begun introducing legislation that combats Islamophobia.

While policy is the end goal of the nationwide campaign, its organizers also see it as a chance for ramping up pro-diversity rhetoric. Just as Donald Trump’s verbal attacks on Muslims have led to an increase in anti-Muslim violence, members of the American Leaders Against Hate campaign are hoping that by highlighting Islamophobia and the need for diversity and tolerance, they’ll be able to spur action in the other direction. That’s why the first part of the campaign has involved getting hundreds of local leaders to sign a letter pledging their support for Muslim communities: to show there is a large and effective counterweight to hateful rhetoric.

As the letter demonstrates, countering hateful rhetoric doesn’t have to involve arduous policy change. Instead, it can involve leaders using their positions of power to call for greater tolerance. Under New York City Mayor Bill de Blasio, for example, the city has begun an ad campaign to not only promote tolerance, but also ensure that Muslim New Yorkers feel welcome in the city. And in Minnesota, which has the largest Somali population in the United States, Abdi Warsame, a City Council member and Local Progress stalwart, has been using his platform to call for greater understanding between the Muslim and non-Muslim community, and to push for city services to be accessible to people who speak different languages, a boon to the city’s large Somali population.

“It’s very important to highlight the issue of Islamophobia in the same way we’d highlight anti-Semitism or homophobia, and start having a dialogue and discourse,” Warsame said. “We want to bring people together to discuss this issue. It’s not just about Muslims. It’s about who we want to be as cities, as states, as a country.”