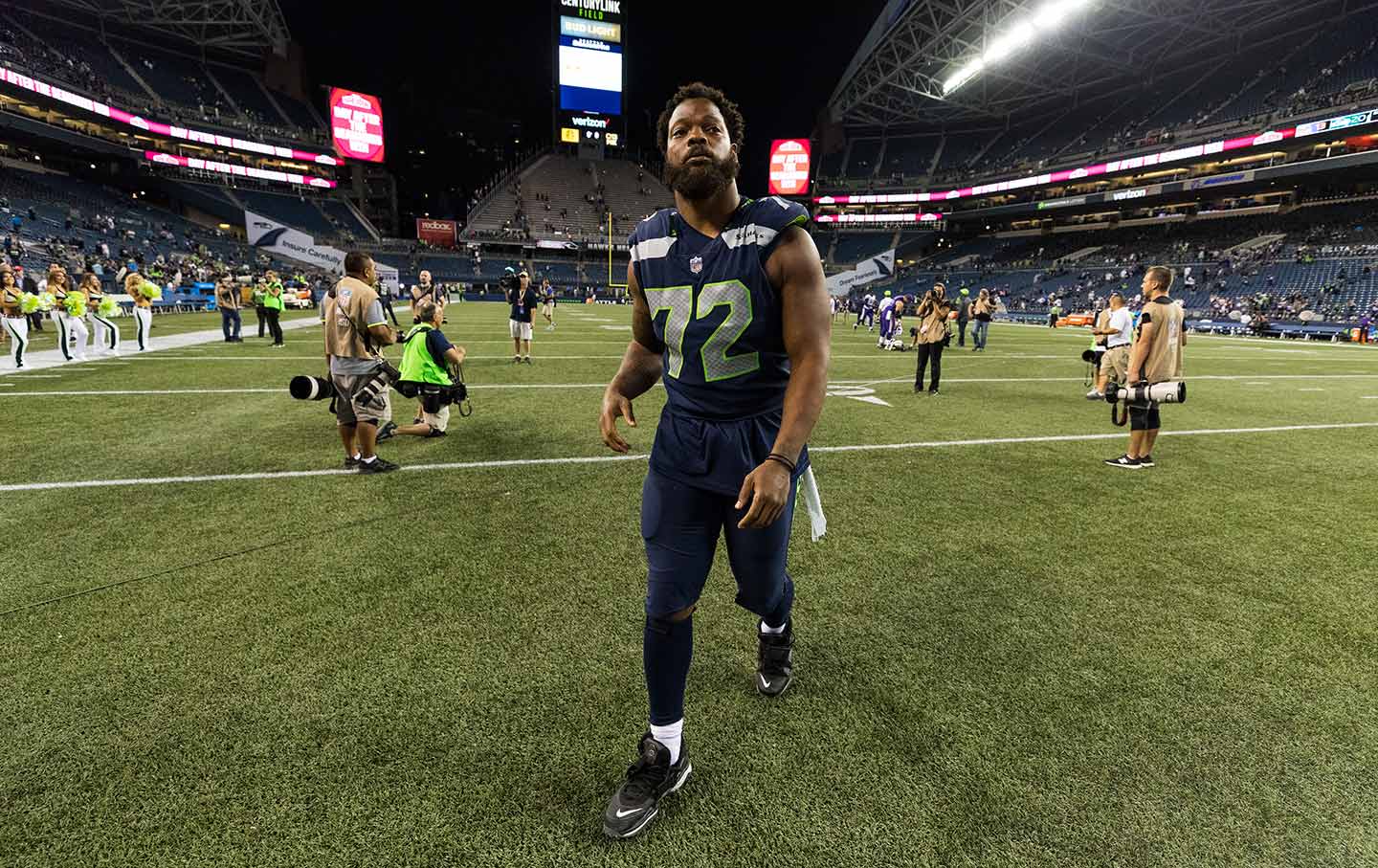 Every year, each NFL team nominates a player for the Walter Payton NFL Man of the Year award. This nomination is intended to honor “a player’s volunteer and charity work, as well as his excellence on the field.” The nominees are decided not by the league office or the 31 billionaires who own franchises, but by the teams. Therefore it is not surprising that among the choices are three of the players most associated with the anthem protests against racism that have dominated media coverage this season: Michael Bennett of the Seattle Seahawks, Kenny Stills of the Miami Dolphins, and Malcolm Jenkins of the Philadelphia Eagles.

But there is another fascinating parallel between Bennett and Stills and the year of resistance that they have shared. Both of them made global news in February when they refused to take part in a trip to Israel organized by the Netanyahu government, after first agreeing to attend. Both, along with four other players, backed out after learning about the propagandistic nature of the trip and being profoundly moved by parallels between the situation for black Americans in places like Ferguson and the Palestinian carceral existence in Gaza.

When Bennett learned about the reality of the trip in February, he wrote the following:

I was scheduled to make a visit to Israel with fellow NFL players. I was excited to see this remarkable and historic part of the world with my own eyes. I was not aware, until reading this article about the trip in the Times of Israel, that my itinerary was being constructed by the Israeli government for the purposes of making me, in the words of a government official an “influencer and opinion-former” who would then be “an ambassador of good will.” I will not be used in such a matter. When I do go to Israel—and I do plan to go—it will be to see not only Israel but also the West Bank and Gaza so I can see how the Palestinians who have called this land home for thousands of years, live their lives.

I know that this will anger some people and inspire others. But please know that I did this not for you, but to be in accord with my own values and my own conscience. Like 1968 Olympian John Carlos always says, “There is no partial commitment to justice. You are either in or you’re out.” Well, I’m in.

Their decision made international news. Outside of the United States, it was subject to more attention than the actions of any other activist-athlete throughout the last calendar year.

Remembering this moment is very important right now. It has long been assumed in sports—not to mention in media more broadly—that even recognizing the humanity of the Palestinian people, let alone criticizing the Israeli occupation, is a political third rail. This is especially the case in the NFL, where powerful owners like Bob Kraft of the Patriots are hard-line supporters of whatever Trump/Netanyahu agenda is being put forward, no matter how bloody. Yet here Bennett and Stills are: They stood up for the basic concept of Palestinian humanity in February, and then were nominated in December for one of the league’s greatest honors.

In the wake of the Trump decision to move the US embassy to Jerusalem at the behest of both hard-right billionaires like Sheldon Adelson and evangelical apocalyptic Christians, the need to visibly resist and say “not in my name” has never been clearer. Even the liberal-media coverage has fallen short: Writers have mostly decried the move because it will inflame violence, rather than pointing to the intolerable violence of the move itself, and the displacement and military crackdown that will inevitably follow. (This is not dissimilar to reactions after the Freddie Gray verdict in Baltimore: There seemed to be more concern about potential riots than the fact that police officers just got away with murder.)

As the year-end sports retrospectives and awards of 2017 begin to lumber in, we cannot afford to forget this ground-breaking political act and the role of two people, Bennett and Stills, whose respect throughout the league is unparalleled. Perhaps the widening opposition to the Netanyahu agenda within the Jewish community is having an impact. Perhaps it’s the recognition of similarities between those under the thumb of increasingly militarized police departments in the United States and those trying to survive in the Gaza Strip. Or maybe it’s as simple as a growing belief in the wisdom of another famous activist-athlete, John Carlos: “There is no partial commitment to justice. You are either in or you’re out.”