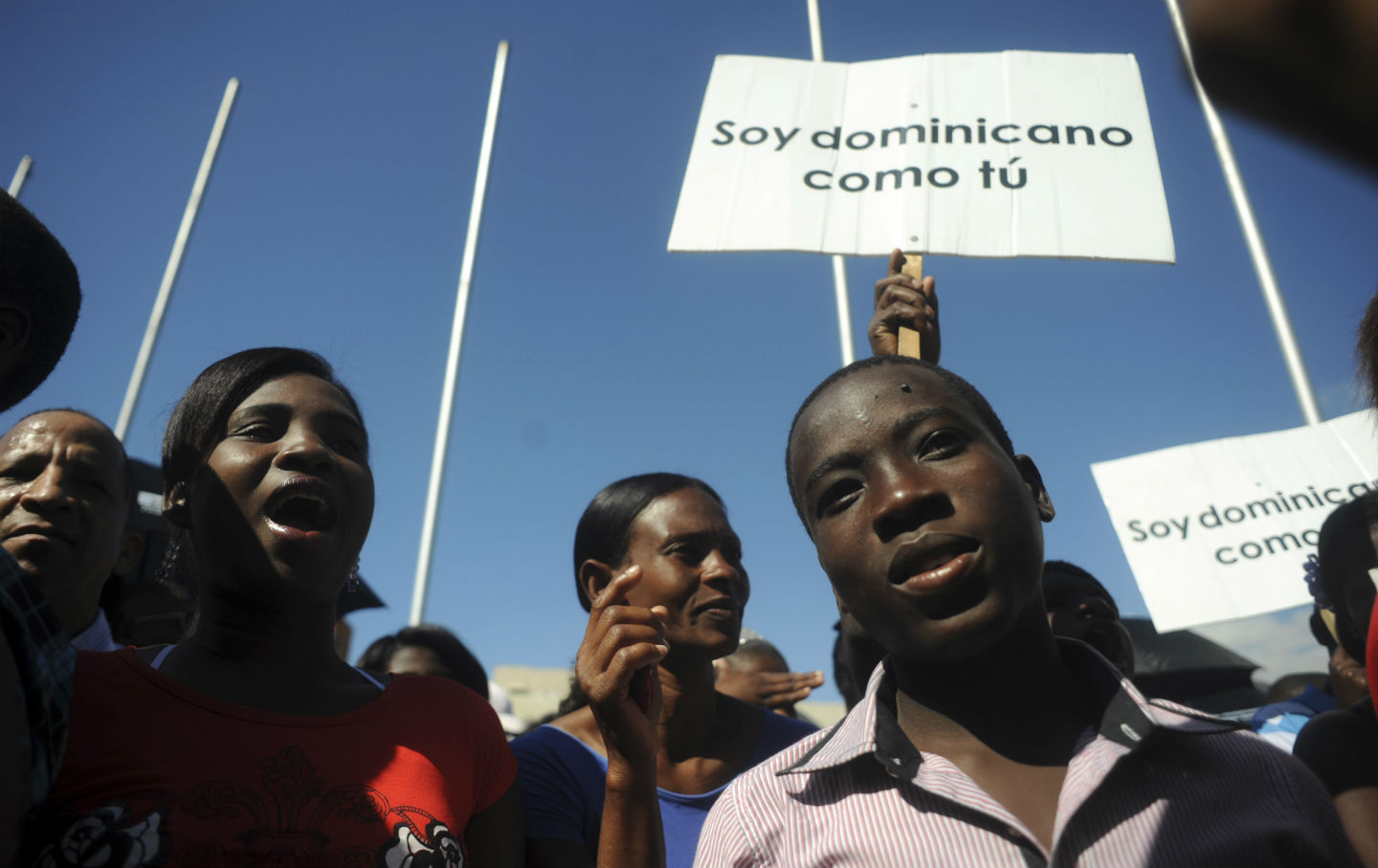 The Dominican Republic is preparing to deport more than a hundred thousand people to Haiti. Born in the Dominican Republic, the targets for expulsion are descendants of Haitians who came to work in sugar plantations in the early 20th century yet never legalized their residency status. They are nearly all poor, street venders, peasants, domestic servants, laborers, mothers and fathers.

Like most every other nation in the Americas, the Dominican Republic defines (or did until recently) citizenship according to a version of jus soli—“right to the soil,” what in the US is often called birthright citizenship. Who is a Dominican? “Persons born in the national territory,” says the 1980 constitution. But that charter, as do many other jus soli constitutions, lists exceptions, usually related to the children of diplomatic personnel or of persons “in transit.” In September 2013, the Dominican Republic’s top constitutional court interpreted those exceptions to apply to descendants of undocumented migrant workers.

According to Rachel Nolan, writing in a recent excellent Harper’s essay (behind a firewall), the ruling applies “to all Dominicans with undocumented foreign parents, most of whom…have no family in Haiti, speak little or no Creole, and are not eligible for Haitian citizenship. The decision was retroactive, affecting anyone born in 1929 or later. Two hundred ten thousand people were suddenly stateless.”

Haiti and the Dominican Republic don’t just share an island, Hispaniola, but a history, one that includes all the signal events that went into creating the modern world: Columbus, conquest, genocide, slavery, imperial war, revolution, and US counterinsurgencies and military occupations. And over the course of that history, for Dominicans, Haitians came to serve, as they do for the larger international community, as objects of reaction formation. “Race does not exist without a referent,” as Nolan writes; in the Dominican Republic, “’black’ means Haitian, or a child of Haitians. To Dominicans, the supposed distinctions are clear: Dominicans are European. Haitians are African. Dominicans are Christian. Haitians practice voodoo.”

Prior to the court ruling and impending deportation, the key moment in 20th-century Haitian-DR relations was a 1937 massacre, ordered by DR’s dictator, Rafael Trujillo (an US ally). The idea was to accelerate the whitening of the country. And for Dominicans to be whitened, the soil had to be reddened: Trujillo, again according to Nolan, “ordered the murder of between 7,000 and 15,000 Haitians who were living on the Dominican side of the border. Trujillo himself had a Haitian grandmother, and wore pancake makeup in the Caribbean heat to lighten his complexion…. The 1937 massacre is known in the D.R. simply as el corte, ‘the cutting.’ To differentiate Haitians and Dominicans, Trujillo’s men forced residents with dark skin to pronounce the word for parsley, perejil. If they could not roll the r like a Spanish speaker, they were executed. The army used machetes to make it look as though nationalist farmers had turned on their neighbors spontaneously, without government orders or assistance.”

Haitians and Haitian-descended peoples have long been targeted for expedited and extrajudicial deportation. But la sentencia (as the September 2013 court decision is called) has intensified the racism and violence. Civil-society activists who oppose the ruling are being harassed and thrown in jail; others are beginning accused of sorcery, and a few have been lynched, others dispossessed of their property. There is, in other words, a vicious, anti-black pogrom is taking place a few hundred miles from the United States, carried out by a very close US ally in the region.

Last year, in May 2014, in response to international criticism, the government passed Law 169-14, which supposedly provided a way for undocumented Dominicans of Haitian ancestry to “regularize” their status and avoid expulsion. A month later, Joe Biden became the first US vice president to visit the DR since Hubert Humphrey. He met with President Danilo Medina and, according to the Associated Press, praised him for “enacting legislation to create a path to citizenship for people of Haitian descent born in the Dominican Republic, describing it as a ‘bold step that required bold leadership.’”

Not so much. The Open Society says that naturalization law will “enshrine statelessness.” The problem is that the naturalization law’s “recognition of citizenship is based not on the fact of birth itself on Dominican territory, but rather on whether a birth was officially registered at the time.” Many, perhaps the majority, of impoverished Dominicans of Haitian descent didn’t have their births registered. Worse, the new law “lets stand the doctrine articulated by the Constitutional Tribunal that birth registration during the 1929-2007 period only bestows citizenship if the parents had formal status as migrants. However, much of the migration of laborers and their families from Haiti during the 20th century was informal. As a result, even individuals who were registered as Dominican citizens at birth may be vulnerable to denationalization at a future date because of the status of their parents, again leaving them stateless” (my emphasis).

Those without birth certificates are required to “declare themselves to be foreigners.” That is, they will have to become stateless, and then enter into an arduous process, petitioning a government that failed to protect their rights in the first place. “These individuals are being penalized for the failure of the state, which is responsible for birth registration. In the Dominican Republic there is also a well-documented history of discrimination by officials against people of Haitian descent, which has historically made it difficult for parents to register births.”

Yale historian Anne Eller says that the May 2014 law—the one passed in response to international outcry—“is a poor amendment for naturalization.” Eller points to an Amnesty International report that says that about 5,000 were able to “avail themselves of the law in its first eight months.” A Dominican human rights organization, Reconoci.do, estimates that only about 8,000 people in total have been able to meet the law’s requirements.

Time is running out. The Dominican Republic’s military is currently stepping up its campaign of collective deportations, sweeping up anyone who looks Haitian and dumping them on the Haitian side of the border. The Guardian writes that “in late January, 30 Dominican-born minors on their way to register for residency permits under the new immigration laws were summarily deported. They were only allowed to return after human rights groups intervened.”

This is all warm-up to the main event, which might be coming soon: DR’s outgoing director of immigration, José Ricardo Taveras, recently announced that the mass deportations of “those his country considers foreigners” will start on June 17, in two weeks.

Even more menacing is the fact that Taveras, a civilian technocrat, was just replaced as head of Immigration by a military man, Gen. Rubén Darío Paulino Sem. As the chief of staff of the Dominican Army, Sem has experience deporting Haitians in large numbers—47,000 in one month alone. Now Sem says he will carry out the expulsion without delay (though Rachel Nolan tells me the deportation might be postponed to August).

What is happening in the Dominican Republic is but one part of the world’s new statelessness, its effects seen in the Mediterranean, the Middle East, the US-Mexican border—as well as in Texas public hospitals, which are refusing to grant birth certificates to children born of undocumented migrant mothers. According to a lawsuit, the “Texas Department of State Health Service has an undeclared policy preventing its employees from issuing the certificates despite the fact that children born on American soil to undocumented immigrants are legal U.S. citizens.”

The crisis on the island of Hispaniola—chronic political turmoil and poverty in the Haitian west, growing chauvinism in the Dominican east—is of a piece, the product not just of historical animosities but the consequences of current economic policies. There was a brief moment, after Haiti’s 2010 earthquake, when even Bill Clinton recognized what had been done to Haiti in the name of “free trade”: the destruction of local markets and rice production. “It was a mistake,” Clinton said, “I had to live everyday with the consequences of the loss of capacity to produce a rice crop in Haiti to feed those people because of what I did; nobody else.” But Bill and Hillary Clinton, their foundation, and the rest of what calls itself the “international community” continues to hold Haiti as a vassal state, fueling the political calamity (that Dominicans react against) and disallowing economic alternatives, as the many posts on this CEPR page dedicated to Haiti demonstrate.

Meanwhile, that same “free trade” regime accredits the Dominican Republic as responsible and worthy, subject to only the softest of criticism for threatening to enact a Caribbean Night of Long Knives. The Dominican Republic ratified its free-trade agreement (CAFTA-DR, a multilateral treaty that includes Central America) with the United States in 2007, and since then the country has experienced growing rural and urban immiseration, even as its economy, praised by The Economist and Wall Street investors, has expanded. A “third of the country’s total population lives in poverty, and almost 20 per cent are living in extreme poverty.” In the cities, the number of poor people has doubled since 2000, from 1.2 million to 2.4 million, according to the World Bank.

Such misery fuels populist nativism. But that explanation, undoubtedly true to some extent, misses a key element: what Junot Diaz (a critic of la sentencia) calls the “elite powers in the Dominican Republic and their ideologues.” It’s the judges who passed the ruling, the law professors who provided juridical support, the politicians and the wealthy who use racism to deflect popular discontent—those who don’t suffer but benefit from the global economy—who are driving the current wave of anti-Haitian xenophobia.