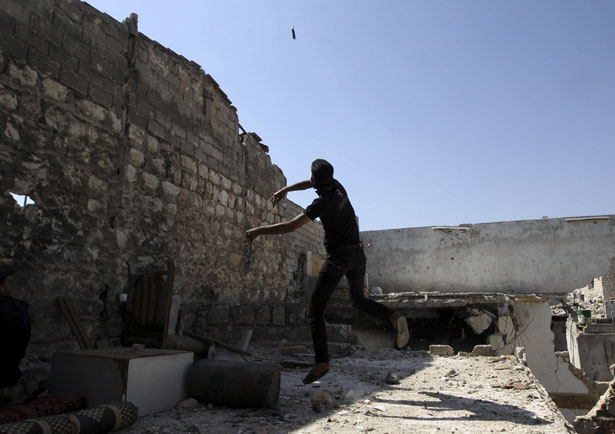 A member of a Syrian rebel group throws a handmade weapon in Aleppo, June 11, 2013. (Reuters/Muzaffar Salman)

There may not be any solution to the civil war in Syria, at least until one side or the other collapses from exhaustion, but the last, best hope for a peace process starts next week in Switzerland, with the opening of a peace conference jointly sponsored by the United States and Russia, under the auspices of the United Nations.

While Secretary of State John Kerry is scrambling to make sure that the rebels are represented in Geneva, the foreign ministers of Russia, Syria and Iran have been meeting in Moscow to prepare for the conference. However, thanks to roadblocks thrown up by the United States, Iran—Syria’s chief regional ally—won’t be invited to attend the talks. Kerry has threatened the Syrian opposition that American aid will be cut off if the groups refuse to attend the Geneva conference, but that’s problematic, too: first, the aid from the United States involves only non-lethal support, and much of it was already suspended when it looked like extremists among the rebels in Syria were seizing warehouses full of materiel.

In Moscow, Foreign Minister Sergey Lavrov of Russia meet with Iran’s foreign minister, Javad Zarif, and Syria’s foreign minister, Walid Moallem, and all three parties agreed that Iran can play a critical role is resolving the war in Syria, according to The Wall Street Journal:

Russian Foreign Minister Sergei Lavrov said Iran would "inevitably" take part in any resolution to the civil war in Syria, as the Iranian and Syrian foreign ministers held a round of meetings with Russian officials in Moscow. After a meeting with Iranian Foreign Minister Javad Zarif, Mr. Lavrov said Iran should take part in an international peace conference aimed at finding a diplomatic solution to the war. “We are proceeding on the basis that Iran should and inevitably will be part of a set of measures to settle the Syria problems,” Mr. Lavrov told reporters.

What’s clear is that no settlement of the civil war is in sight. If it takes place at all, the conference will drag on for many, many months, toward an uncertain conclusion. The process of disarming Syria’s chemical weapons arsenal is proceeding apace, though not without some bumps in the road, and perhaps the best that could come from the meetings in Geneva is a plan to establish local ceasefires in which both sides agree to stop fighting and allow humanitarian supplies to reach desperate civilian populations.

Only days before the conference is scheduled to start, it isn’t clear who’ll attend, especially among the exceedingly complex armed Syrian opposition. Because of the ongoing radicalization of the Syrian forces arrayed against President Bashar al-Assad’s government, it’s fragmented into competing and disparate factions, from the openly pro–Al Qaeda ISIS (Islamic State of Iraq and Syria) to the proto–Al Qaeda Al-Nusra Front to the radical Islamist coalition called the Islamic Front. It also incudes more mainstream, Western-backed factions, including the Free Syrian Army (itself a coalition of several armed movements) and the various exile groups backed by the United States, France, Saudi Arabia and other powers, such as the National Coalition for Revolutionary and Opposition Forces. It’s a tangle.

Fighting between and among Syrian rebels, especially involving ISIS, has been intense in recent weeks. In Syria’s north, near the Turkish border, hundreds of fighters and civilians have died in battles between ISIS, the Islamic Front and others. According to recent reports from the UN and others, the rebels battling against one another have committed horrific war crimes, including mass executions.

As The Wall Street Journal reports, the Assad government is gaining ground nearly everywhere in Syria, so with each passing day the opposition has less and less credibility. Says the Journal: “The Assad regime is gaining ground as it takes advantage of infighting between Syrian opposition groups, in a sign of how the rise of extremists could tip the balance in the three-year-old civil war.” The paper adds that gains by ISIS in some areas of the country are further undermining the pro-Western, anti-Assad forces. In the north, and around Aleppo, the Syrian government is also making important gains, according to Reuters:

The Syrian government has retaken territory around the northern city of Aleppo, the military said on Tuesday, after two weeks of rebel infighting that has weakened the insurgency against President Bashar al-Assad. The internecine conflict among various rebel groups will allow Assad to portray himself as the only secular alternative in Syria to a radical Islamist regime when peace talks begin in Switzerland on January 22.

Though he hasn’t said so—indeed, he’s insisting that the conference in Geneva create a transitional government that replaces Assad—Secretary Kerry may agree more than he’s letting on with former US Ambassador to Iraq Ryan Crocker, who argued (as I noted here recently) that Assad may be “the least worst option,” in Crocker’s opinion. More and more, in Washington, there is growing disenchantment with the Syrian rebels and an increasing awareness that Assad may outlast the civil war. In fact, the US-Russian accord that began the process of eliminating Assad’s chemical weapons implicitly accepts the idea that Assad will stay on, at least for the time being. Especially when compared to the growing might of Al Qaeda and its allies in Syria, which is drawing American, European and other would-be jihadists, Assad is looking better and better.

If there is to be peace in Syria, it will come when Iran and Saudi Arabia, the principal supporters, respectively, of the Shiite and Sunni factions in the Middle East, work together to stabilize the country.