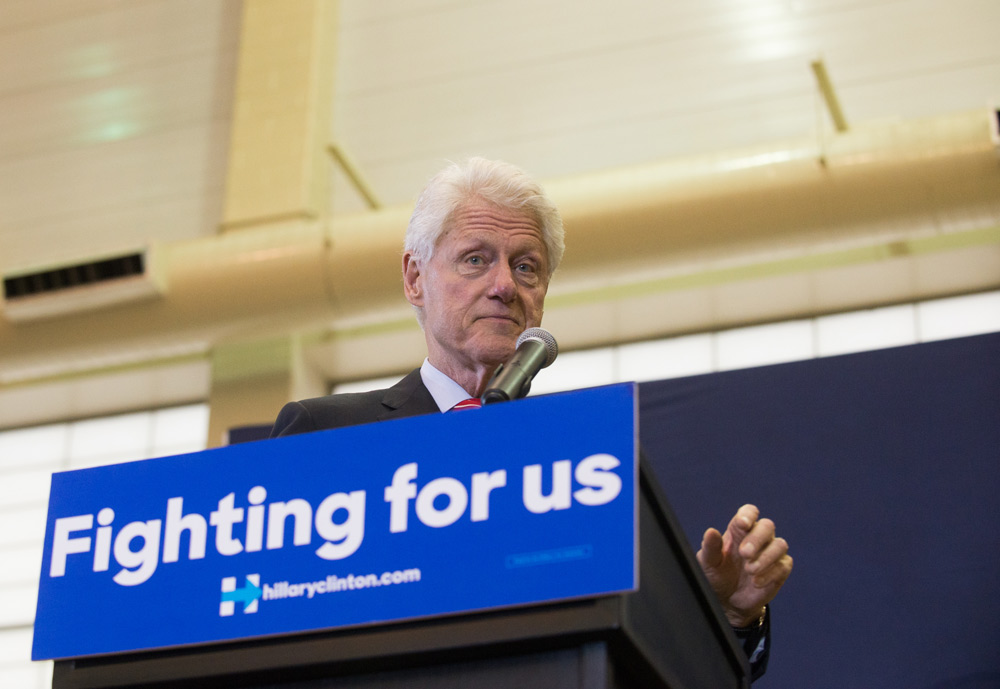 Former President Bill Clinton caused a stir last week when, confronted by protesters at a campaign rally in Philadelphia, he offered this defense of the racist language deployed by then–first lady Hillary Clinton as justification for the Violent Crime Control and Law Enforcement Act of 1994:

I don’t know how you would characterize the gang leaders who got 13-year-old kids hopped on crack and sent them out into the street to murder other African American children. Maybe you thought they were good citizens…. You are defending the people who kill the lives you say matter. Tell the truth!

That Bill Clinton is now forcefully defending the same bill that, just last year, he admitted “made the problem [of mass incarceration] worse” does not come as a surprise. For the entirety of his political career, Clinton has attempted to sell regressive racist policies as a form of advancement for black communities, while enjoying a level of cultural cachet within those communities that has largely inoculated him from the criticism he deserves.

Those days are over—and we are finally reckoning with the damage done during Clinton’s presidency and demanding more from the Democratic Party. But Clinton’s comments still shed light on the way our 1990s conceptions of crime and justice influence how we understand those conceptions today.

Undergirding Clinton’s defense of the crime bill is the belief in the existence of a natural and permanent criminal class of citizens. If there are people who are going to commit crimes, logically it follows that we should have mechanisms in place to punish those people. As that class of people grows and shows more and more disregard for the law, logically it follows that we should invest more in those mechanisms of punishment while also making them harsher.

But there is no inherent criminality. First, crime is not a fixed category of behavior. Anything can be a crime if we pass the legislation to make it so. Sagging your pants is a crime in some places. If Republicans have their way, performing an abortion, a routine medical procedure, could become a crime. What is and isn’t illegal is not the best barometer for a behavior’s morality.

Additionally, if the threshold for becoming a criminal is breaking the law, are not most people criminals? If littering and driving over the speed limit were illegal, wouldn’t most American fit the description of a criminal for having broken these laws? Or does the “criminal” tag only apply to those offenses that we’ve deemed serious enough to warrant prison time?

There are some behaviors that are more socially disruptive than others. Violence, sexual and otherwise, merits our attention as behavior we should seek to eradicate. However, if we buy into the idea of an existing and permanent criminal class, we end up devoting our resources to measures that don’t offer the hope of prevention. We still end up with a system of punishment and containment.

But that is what Harvard University researchers Thomas Abt and Christopher Winship would have us believe. Their new report, which includes research conducted across the United States and Latin America, concludes, according to Vox, that “Cities, states, and the federal government could make significant strides in fighting crime if policing resources were primarily dedicated to the most problematic neighborhoods, blocks, and even people—the ones communities know are causing trouble but don’t get enough specific attention from the criminal justice system. And coupled with behavioral intervention programs for at-risk youth and adults, these types of policies could greatly reduce violence not just in the US but around the world.”

In the interview, Abt says, “My biggest problem with the national conversation is that we’ve created a false dichotomy between legitimacy and safety…. Mass incarceration is a form of social injustice. Excessive use of police force is an injustice. Racial profiling is an injustice. But crime is also an injustice. And like those three forms of injustice that I just described, it has a disproportionate impact on poor people of color. So if you claim to represent poor people of color, I think you really need to take a broader perspective on what social justice means.”

One of my biggest problems with this view is that Abt removes the social, economic, and political contexts under which crime thrives. Again, it’s as if “high crime” and “criminals” simply exist somewhere in the wild. But crime, violence in particular, thrives under particular social circumstances. Poverty is the great predictor of where high-crime areas will be. We have also seen time and again that threats to men’s sense of masculinity and masculine pride drive violence. All of this is exacerbated by the abundance of and easy access to guns in America. Crime, according to Abt, may be an injustice, but it is also a byproduct of other forms of injustice. His solution—more, targeted policing—does not address those underlying factors.

But that leads me to my other big problem. Abt says mass incarceration and police violence are injustices, but still proposes the police as a solution to problems of crime. He advocates ending one form of violence by increasing another form of (state-sanctioned) violence. Even if it works to drive down crime—although the evidence is inconclusive on how effective more policing is to that effect—the means of achieving that are through fear, violence, and the warehousing of human beings in cages. Not only is it unclear that this system is effective as a deterrent to crime, it reinforces the idea that there’s a permanent criminal class, disrespectful of the law and of community safety, and that in turn prevents us from investing in the social programs that would alleviate much of the inequality that produces crime in the first place.

To address undesirable, anti-social behaviors, we constantly turn to the police, but inevitably more policing means more violence and incarceration. Unless we are now advocating for police to be trained in assisting people in finding jobs, the homeless in finding shelter, youth in finding recreation, the only tools a police officer has in combatting crime are the threat or use of violence and arrest. But as the New York Times Magazine profile of Edwin Raymond, a black NYPD officer currently part of a lawsuit against the department for pushing what he has called “inherently racist” policy, shows it is an almost futile battle to alter police culture, especially when trying to do so from within the ranks. Raymond, who grew up in the East Flatbush area of Brooklyn, became a police officer in order to make a steady paycheck and lift himself out of poverty, but also to transform the violence-filled neighborhood that raised him. He wanted to change the relationship his community has to police and focus more on arresting the most violent criminals and less on the so-called “quality of life” infractions that have been a staple of policing since current Commissioner Bill Bratton’s first tenure in this post in the early 1990s. He wanted to change the way policing is done. But according to Raymond, and backed up by the recordings he has taken of meetings with his commanders over a period of two years, he has been passed over for promotion and assigned to less than desirable posts because of his lack of “numbers”—arrests and summonses. As an anonymous officer quoted in the story says, ‘‘You don’t get recognized and rewarded for helping a homeless person get permanent housing, but you get recognized for arresting them again and again and again.’’

Could a police officer take on this duty? Maybe. But my question is, even if he or she did, why should that be a job for a police officer? Why should that be a job for an armed guard for the state? This should be a rallying call for more social workers, more public housing, a guaranteed income, and more investment in economic and social welfare. Instead, we turn to the police.

We’re learning now, though, that depending on who constitutes the affected population, we can create solutions to social problems that do not involve police and prisons—as we’ve seen with the recent heroin epidemic, which is mostly affecting white people. In America, we respond to crime differently based on who we believe are the perpetrators and the victims. That’s another thing Abt, and Clinton, and most others weighing in to this conversation would like to pretend isn’t happening. If you are white and affluent, whether perpetrator or victim, you receive treatment. If you are black and/or poor, whether perpetrator or victim, you receive punishment.

We can imagine a better way. It’s true that even if we were to completely eradicate poverty, abolish gender hierarchies, uproot white supremacy, and generally have a more robust socialist state, we would not completely eliminate violence. It has always been a part of human existence. What we can do, though, is ensure that the social conditions under which violence thrives and perpetuates itself are not as prevalent. And then, we can go about the business of adjudicating instances of violence that don’t involve more violence from the police or prisons, and actually focus on the needs of the victimized.

To get there requires a willingness to put to rest the myths we have built into our politics. It will take us a while to let them go.