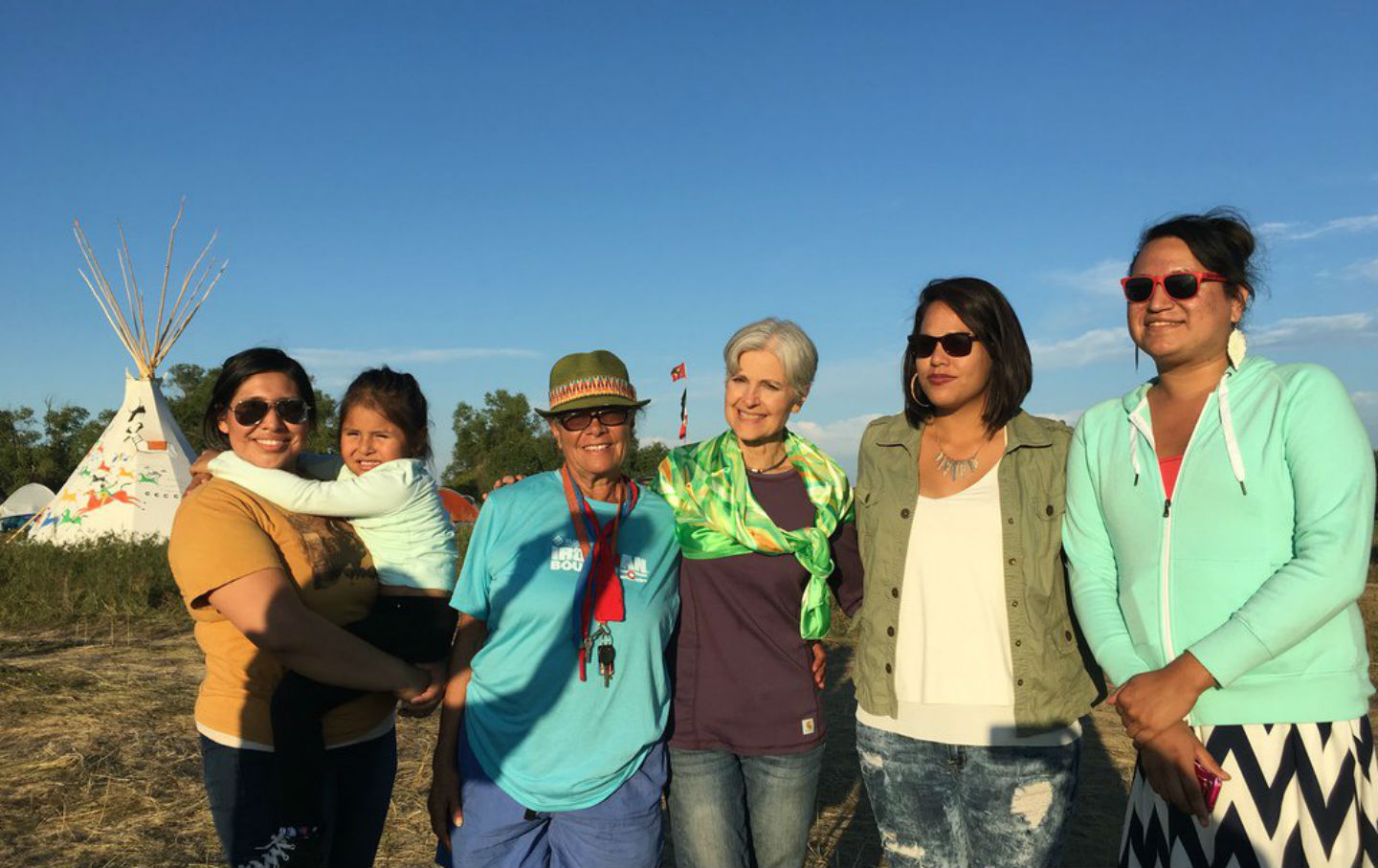 Third-party presidential candidates have participated in acts of civil disobedience, risked arrest, been arrested and been jailed with some frequency over the past 150 years. So the fact that Green Party presidential nominee Jill Stein faces misdemeanor criminal charges in North Dakota stemming from a protest against the Dakota Access Pipeline is hardly unprecedented.

But it is politically significant.

Stein is using her Green Party candidacy to support and highlight popular struggles, as have left-wing independent and third-party presidential and vice presidential contenders throughout American history: including former vice president Henry Wallace and Idaho Senator Glen Taylor (whose 1948 Progressive Party campaign challenged segregation by holding integrated events in Southern states, leading to Taylor’s arrest and conviction for attempting to use a door reserved for African Americans in Birmingham, Alabama), Socialists Eugene Victor Debs (who was jailed after delivering an epic anti-war speech during World War I) and Norman Thomas (who was frequently arrested and roughed up by the police when he joined union picket lines, civil-rights demonstrations and free-speech protests in the 1920s and 1930s), and Equal Rights Party presidential nominee Victoria Woodhull (who spent Election Day 1872 in New York City’s Ludlow Street Jail after publishing an expose in her Woodhull & Claflin’s Weekly newspaper).

When the Morton County Sheriff’s Department in North Dakota announced plans to pursue misdemeanor criminal trespass and criminal mischief charges against Stein (and Green vice-presidential candidate Ajamu Baraka) for entering private property that was posted against trespassers and spray-painting a statement on a bulldozer blade, Stein’s campaign was quick to acknowledge and detail her involvement in Tuesday’s protest against the pipeline.

Bill McKibben has called the fight over the pipeline “a leadership test” that presidential candidates cannot duck.

“The action was led by Indigenous water defenders who locked down onto construction equipment. Days earlier the same bulldozers were used to assault the ancestral grave sites of the Standing Rock Sioux nation. Pipeline management at that time had unleashed vicious attack dogs on the peaceful protestors and sprayed pepper spray into protesters’ faces,” the campaign explained, adding, “In support of the action that stopped pipeline construction on Tuesday, Stein spray-painted the words ‘I approve this message’ onto the blade of a bulldozer that had been tagged with other messages of protest and that had been used to destroy sacred burial sites of the Standing Rock Sioux.”

Using the bully pulpit afforded to third-party presidential candidates who gain significant support—Stein is expected to be on at least 44 state ballots and that of the District of Columbia, and she was polling at 5 percent in the national Economist/YouGov survey released Wednesday—the Green candidate is drawing attention to struggles of consequence in much the same way that Debs and Thomas did.

“I hope the North Dakota authorities press charges against the real vandalism taking place at the Standing Rock Sioux reservation: the bulldozing of sacred burial sites and the unleashing of vicious attack dogs. I hope they take action against the Dakota Access Pipeline company that is endangering drinking water not only for the Standing Rock Sioux, but for millions of people downstream of the reservation who depend on the Missouri River,” says Stein. “The pipeline will carry up to 570,000 barrels of highly polluting Bakken crude oil per day. This would be another deadly blow to a climate teetering on the brink. It cannot be allowed to go forward.”

Does engaging with a popular protest benefit Stein’s candidacy? Perhaps. But even those who do not support Stein should recognize that her embrace of activism is helping to expand the popular discourse. Widespread coverage of the threatened arrest of a presidential contender brought new attention to the struggle of the Standing Rock Sioux Tribe and other tribal nations against a dangerous pipeline that Vermont Senator Bernie Sanders says must be stopped because it “will transport some of the dirtiest fuel on the planet.”

Bill McKibben has called the fight over the pipeline “a leadership test” that presidential candidates cannot duck. He noted that Stein “showed up to meet with the tribes and back their fight,” in a Los Angeles Times op-ed that urged Democratic presidential-nominee Hillary Clinton to take a stand in support of the struggle of the Standing Rock Sioux and a Democratic platform that speaks of “a profound moral and legal responsibility to the Indian tribes,” acknowledges that “throughout our history we have failed to live up to that trust” and promises: “As Democrats, we will constantly seek to ensure that American Indian communities are safe, healthy, educated, innovative, and prosperous.”

“It’s the next chapter in a very old story—500 years of broken promises,” writes McKibben with regard to the duty of to take a stand. “Clinton can’t stop it—but she can speak out, and if she did so perhaps the Obama administration and the Army Corps would wake up and realize that it’s 2016, not 1840.”

Surely, an intervention by Clinton would get more attention. But the intervention by Stein—and the attention to the arrest threat she now faces—offers a reminder of the consequential role that independent and third-party candidates can and should play in our politics.