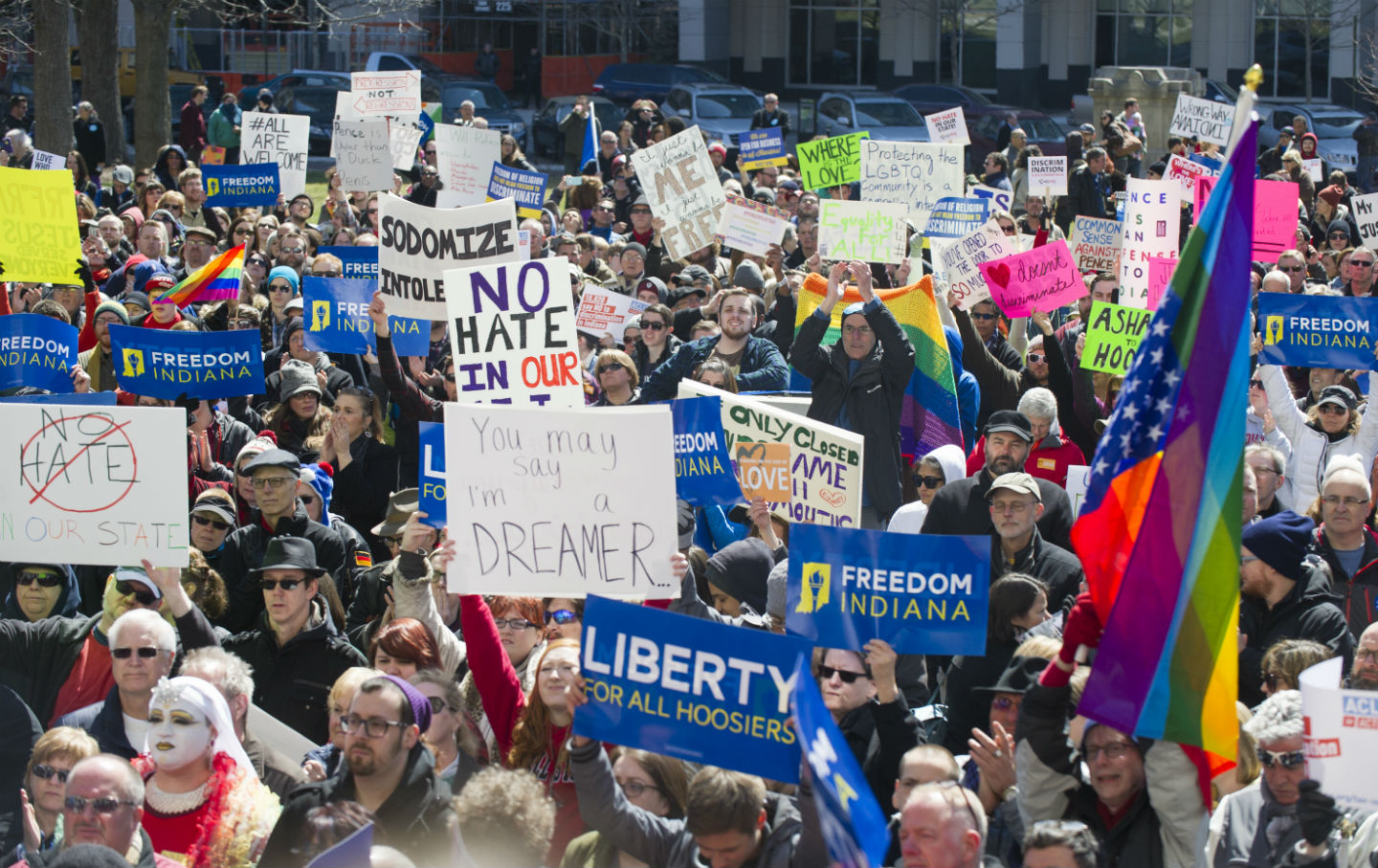 Thousands of opponents rally outside the Indiana State House after passage of the Religious Freedom Restoration Act, March 28, 2015. (AP/Doug McSchooler)

It’s no news that support for abortion rights is stagnant while gay rights become ever more popular. Two stories out of Indiana illustrate the diverging fortunes of these two crucial progressive causes. When Governor Mike Pence signed his state’s Religious Freedom Restoration Act (RFRA), permitting secular businesses to refuse to serve LGBT people on religious grounds, there was an immediate furor. Conventions threatened to relocate. The CEOs of Angie’s List and Salesforce, both Indiana-based businesses, signed an open letter criticizing the law. A wide range of business leaders, celebrities, and honchos spoke out, including the heads of Apple, Walmart, Yelp, NASCAR—NASCAR!—and the NCAA. The governors of Connecticut, Washington and New York banned state-funded travel to Indiana, as did the mayors of Washington, DC; Denver; and San Francisco. On Twitter, #BoycottIndiana became popular enough to spawn a backlash against trendy blue-state liberals who had probably never even been to the state and knew nothing about it. “LGBT people and equality allies live and work in this state too, and right now they need our support and our presence more than ever,” wrote Kristen Clodfelter in Salon. As has been noted, the part of the state that would suffer most from a a boycott is the cash-starved Democratic stronghold of Indianapolis, which has a local ordinance protecting LGBT people from discrimination; the Republicans who run state government would be thrilled to see the city smoldering in ruins.

#BoycottIndiana may have painted the state unfairly as a nest of bigots, but money talks. Within days, Pence called for a revision of RFRA that would prevent businesses and individuals from using the law as a license to discriminate based on sexual orientation or gender identity. After Walmart weighed in against a just-passed Arkansas RFRA, Governor Asa Hutchinson insisted on a similar fix, and Georgia dropped plans for a RFRA of its own. The revised laws bar businesses and individuals from discriminating against LGBT people, but fall short of making sexual orientation and gender identity a protected classification like race or sex or religion. Still, history is clearly on the march. Poll after poll shows increasing acceptance of LGBT people and same-sex marriage, especially among young people, even if they are evangelical. New York Times columnist David Brooks is sounding more and more out of touch as he begs LGBT people to exercise “tolerance, respect and gentle persuasion” toward bakers and photographers and others who won’t provide services for same-sex weddings. (It’s hard to not to have warm feelings for small-town family-business owners who deal in lovely things like cakes and flowers. But before you give them a pass, think about state clerks who won’t register gay weddings, adoption agencies who won’t accept LGBT people as clients, doctors like the pediatrician in Michigan who rejected a lesbian couple’s baby as a patient, and other less lovable representatives of “deeply held religious beliefs.”)

Contrast Governor Pence’s quick retreat on RFRA with last week’s other big Indiana story: Purvi Patel’s twenty-year sentence for feticide and child neglect. Patel, 33, who lived with her conservative Hindu parents and hid her pregnancy from them out of shame, says she had a miscarriage that resulted in a still birth; when she started to bleed heavily she went to the hospital and dropped the dead fetus in a dumpster along the way. Based on some text messages between Patel and a friend, the prosecutor claimed she had self-aborted with pills bought on the Internet; based on a discredited test, he argued the fetus was born alive. That Patel could be convicted both of killing a fetus and neglecting a child, which makes no sense at all, shows how determined prosecutors were to send her away.

Back in 2009, when the state feticide law under which Patel was convicted was amended to increase penalties, its pro-life backers insisted its purpose was to protect pregnant women from violent male partners and other criminals; it would never be used against women themselves. Patel is the first woman to be convicted and sentenced under the feticide law. But she is not the first woman to be charged under Indiana’s feticide law: that was Bei Bei Shuai, who tried to kill herself by swallowing rat poison when her lover abandoned her late in pregnancy, and delivered a baby who died after four days. Shuai was charged with murder and attempted feticide and spent over a year in jail before accepting a plea bargain.

In the century or so that abortion was criminalized in the United States, many women were injured or died but women did not go to prison for ending a pregnancy, let alone for a miscarriage or still birth. Today’s anti-abortion sentiment is crueler: hundreds of women are arrested around the country for poor pregnancy outcomes supposedly related to drug use or other conduct. Women have been charged with self-abortion, too, although usually the charges have been dropped because it’s hard to prove. That could have happened in Indiana, had the state wanted to show compassion to a woman in obvious crisis. Aren’t anti-choicers always saying women abort out of confusion and desperation? Even if Patel did give herself an abortion with pills, what is the point of tormenting this troubled woman and destroying the rest of her life? Abortion, after all, is legal, even in Indiana.

Is Indiana going to become like El Salvador, where women who go to the hospital with what they say are miscarriages are turned in by doctors and nurses, investigated by the police and sometimes sent to prison for years because authorities conclude they’ve had abortions? In my view, self-abortion should not be a crime in the first place: it’s the woman’s body and that should be the end of the discussion. But in any case it is hard to see what public good is served by prosecutions like Patel’s: all they will do is keep hemorrhaging women away from medical care, lest they encounter a doctor like the one Patel saw in the emergency room, a member of American Association of Pro-Life Obstetricians and Gynecologists who took it upon himself call the police and assist the police in searching dumpsters until the fetus was found.

It’s time for progressives who rallied against the Indiana RFRA to show the same energy and conviction and urgency in support of women’s reproductive rights. At least thirty-eight states have feticide laws, after all—this is not an issue for just one state. (Consider, too, that about 10 to 20 percent of known pregnancies end in miscarriage.) If CEOs are concerned, rightly, that their LGBT employees be treated as equals in Indiana, they should show as much concern for their pregnant and potentially pregnant employees. The same RFRA laws that open the door to discrimination against LGBT people lay behind the Supreme Court’s infamous Hobby Lobby decision, which permits business owners to use religion to deny their employees health insurance coverage for birth control.

I understand that same-sex marriage and reproductive rights are different: marriage is about love, and abortion is about freedom. There are no abortion cakes. But freedom is a bedrock American value, even when it’s for women.