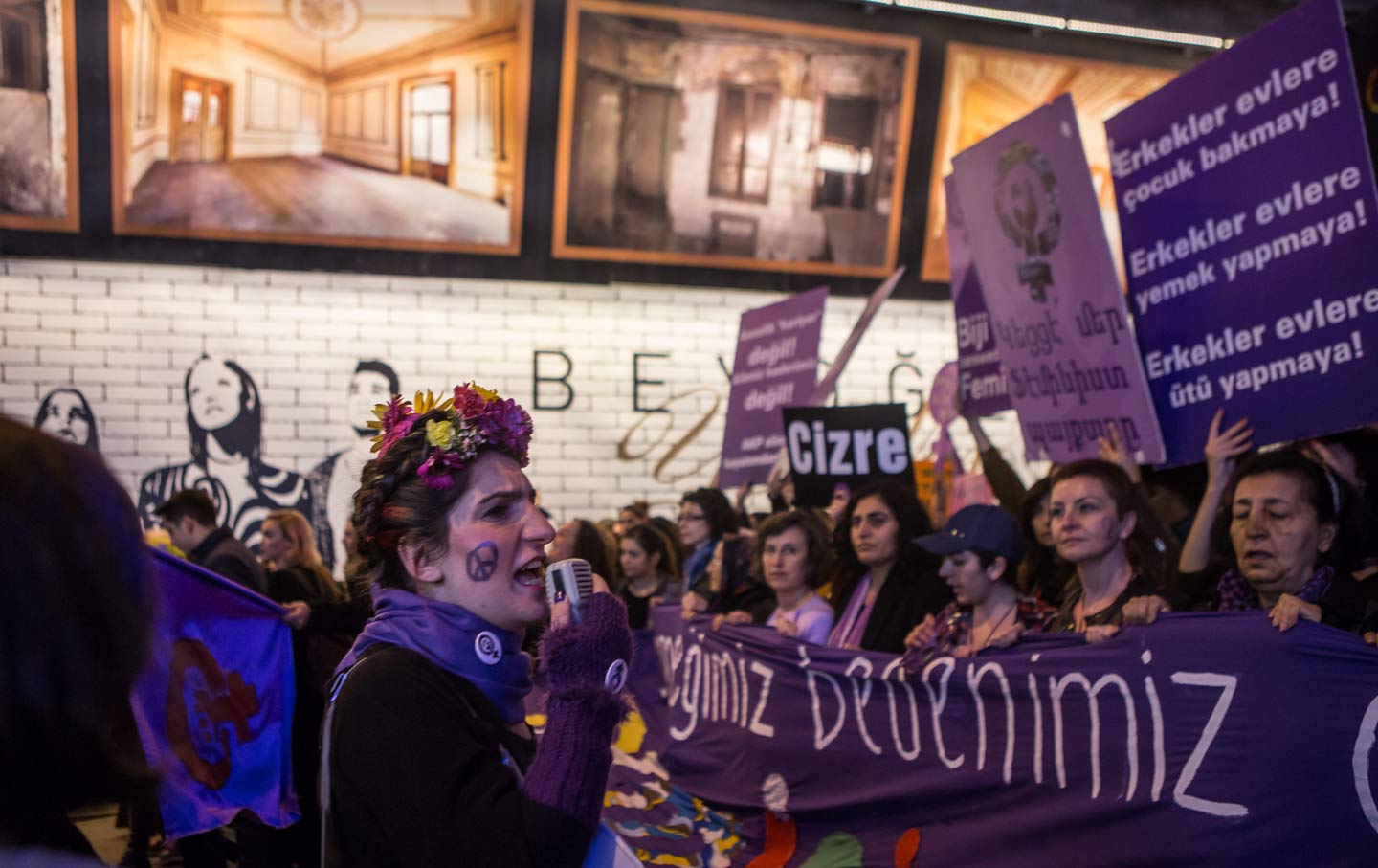 People demonstrated their support for International Women's Day in Istanbul on March 8. (Photo by Mauricio Morales / Sipa via AP Images)

March 8 was International Women’s Day, which means the burning question on Twitter was naturally: Why isn’t there an International Men’s Day? (Actually, there is: It’s November 19.) Last year, China celebrated by arresting five feminist activists who were protesting sexual harassment. This year, Turkish police celebrated by attacking a feminist rally with rubber bullets. Iran’s Ayatollah Khamenei celebrated with a tweet: “basis of western culture is that women should be presented in society as a product, an object that men can benefit from”—unlike in Iran, where girls can be married legally at 13 and in practice at 9, and polygyny is permitted. In the United Kingdom, Member of Parliament Jess Phillips honored the day by reading out loud in the House of Commons the names of the 120 women who had been murdered in the past year by their male partners or family members. (Some were killed by an ex-partner even after leaving a violent relationship.)

Elsewhere, think tanks and NGOs celebrated in the traditional manner, by releasing a flood of gloomy statistics. The Inter-Parliamentary Union issued a report showing that women’s progress in political representation has stalled for the second year in a row. It’s now 22.6 percent globally, which means that the US House and Senate, at 19.5 percent, is under par. One bright spot is that women are now 18 percent of parliamentary speakers, a very powerful position, as Nancy Pelosi would surely agree, and which has led (looking at you, Mauritius!) to commissions mandating greater attention to gender justice. The report notes that quotas, whether required or voluntary, are the driving force behind significant increases in female MPs. As I wrote in my last column, a newly implemented quota system in Ireland raised women’s percentage from a very sad 15 percent to a bit more than 22 percent. And many of these newly elected women are feminists committed to overturning the constitutional ban on abortion and ending austerity programs that have slashed funding for women and children. Fun fact: A study from the Overseas Development Institute claims that Irish men do the least childcare of any of the 37 nationalities studied, including men in Mexico, Iraq, and the United States. Only 7 percent! But, international men, before you pat yourself on the back for not being like those Irish man-babies, consider that in the most equal nation, Sweden, fathers still do only 37 percent of the childcare.

Over at the UN, they’re focusing on the issue of child marriage, which blights the lives of millions of girls in Africa, Asia, and the Middle East—1 billion girls and women by 2035 if current trends continue, including in relatively developed countries like Turkey, where one-third of girls are married by 18, and thousands before their 16th birthday. Early marriage means an end to education, a real chance of death in pregnancy and childbirth, and tremendous vulnerability to marital rape and domestic violence. Unfortunately, war is a great promoter of child marriage, as well as child prostitution, as desperate families marry off their girls to survive, so given conflicts in Syria, Yemen, South Sudan, and elsewhere, it is hard to imagine child brides soon becoming a rarity.

Although globally, more boys than girls are in school—and for International Women’s Day, UNESCO released a report finding that twice as many girls are denied schooling as boys—one area in which women have made great strides is education. In countries as disparate as Iran, the Russian Federation and the United States, women outnumber men in universities. But those advances have not translated into comparable gains in the workplace. Around the world, women earn on average 76 percent of men’s wages, and are much more likely to be in the informal sector of the economy, which means no pensions, health insurance, paid vacations, or legal protections. In the United States, according to the Institute for Women Policy Research, women’s earnings hover around 79 percent of men’s, women earn less in every field and entry in male-dominated fields has stagnated: “if change continues at the same slow pace as it has done for the past fifty years, it will take 44 years—or until 2059—for women to finally reach pay parity.” And no, it’s not just voluntary self-sorting: Outright sex and race discrimination remains significant. Adding insult to injury, not only are women paid less, they’re charged more for basically identical products, whether it’s for a girl’s scooter (pink) or a bag of women’s razors (pink) or skin cream from Kiehl’s (the cheaper manly version works fine, my daughter reports). And you can tell which sex is in charge of government by the simple fact that menstrual supplies are taxed, but deodorant, Rogaine, and Viagra are not. Women in Europe and the United States are vigorously protesting the tampon tax, with some success—Canada, Pennsylvania, Minnesota, and New Jersey have all removed it—but also results that recall the old “you just don’t get it” meme: In the UK, the Tories propose using the tampon tax to cover their cuts to women’s shelters. What clever fellow figured out that women should pay for male violence? Why not tax condoms, beer, and soccer tickets? In Utah, an all-male committee voted to keep the tax, because without it they would have to raise taxes on something else and that would be just terrible.

Conservatives and followers of Richard Dawkins love to tell Western women to count their blessings—at least they’re not being virginity-tested in Afghanistan or honor-killed like roughly 1,000 Pakistani women a year. Point taken, but that’s no reason to overlook the fact that violence, discrimination, and misogyny are Western problems also. I’m sure it doesn’t make the women raped by guards in New York State prisons—a lawsuit recently brought by six inmates against the Department of Corrections alleges that there is “persistent sexual abuse” in the prison system—feel better to know that in Egyptian prisons they’d be raped and also tortured; US mothers forced by family courts to share custody with violent ex-partners probably aren’t grateful that at least they don’t need their husband’s permission to divorce, as in Israel.

But let’s end on an optimistic note: To mark the anniversary of her arrest, Chinese feminist Li Tingting posted a video on Facebook in which she thanked the government for “pushing the feminist movement to another peak.” Onward and upward!