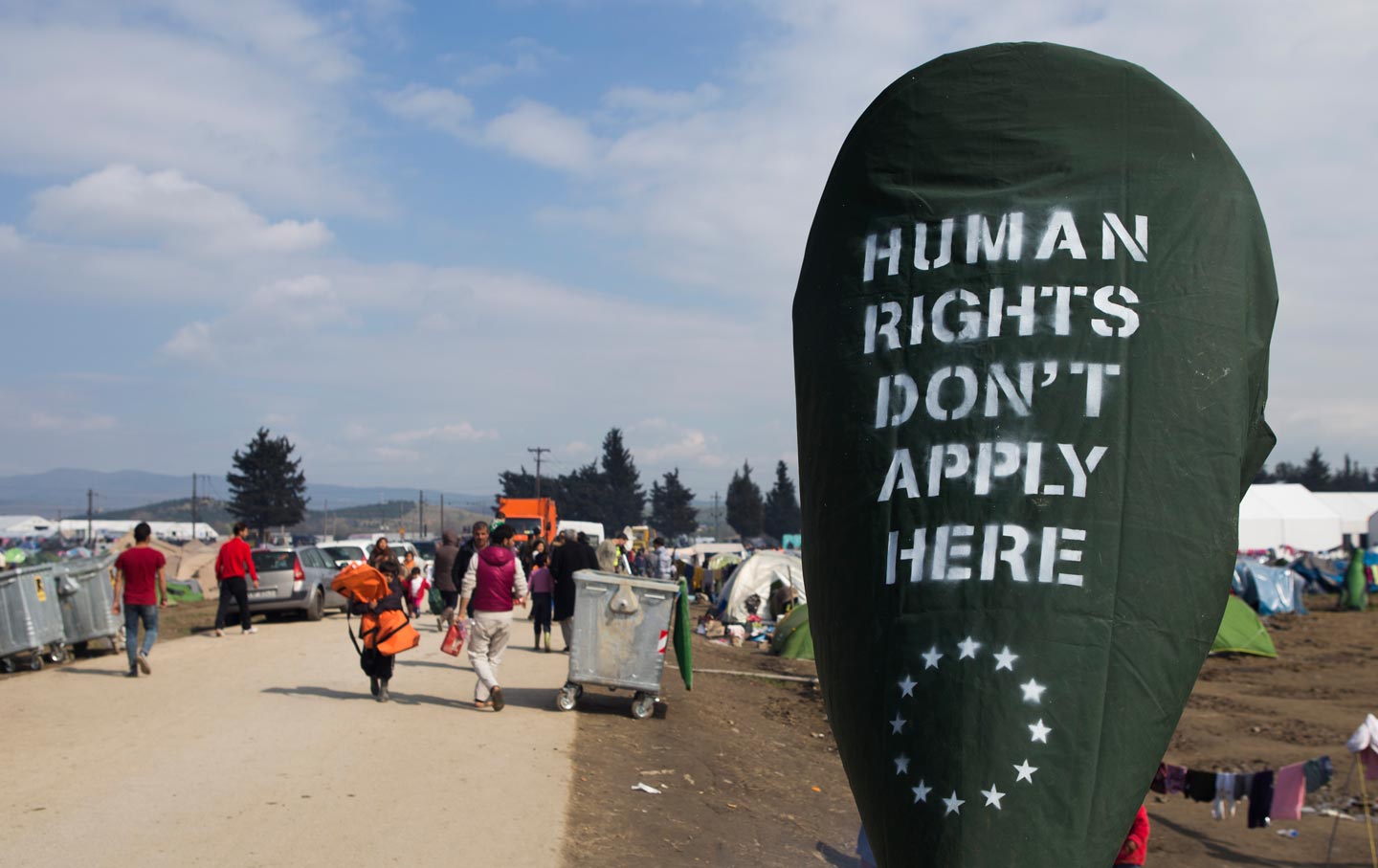 A sign reading “Human rights don’t apply here” at a makeshift migrant camp on the Greece-Macedonia border near the village of Idomeni. (Tasos Markou for NurPhoto / Sipa via AP Images)

All around us, borders are broken more often than they are enforced, but the political moment has nevertheless become about building new walls. Trump’s call for a wall at the US-Mexico border—however unrealistic and buffoonish it sounds on the stump—echos the frenzied cries in Europe’s borderlands to erect wire fences and shut the gates.

But the real divisions are being sown within borders, as society polarizes over collective anxieties about losing control over place and identity.

Trump’s border fantasies overlap uncomfortably with the savage reality of Obama’s present-day policies, as the administration plans to launch another deportation drive aimed at booting out Central American migrants. That move, advocates fear, will only send youth back to deadly environments of gang violence and sexual assault.

On the edges of Europe, the new strategy to choke off migration flows theoretically provides for a one-to-one migrant swap between Turkey and Europe while refugees are supposedly resettled incrementally on the continent.

The populist backlash in both Europe and the United States is all the more stunning in light of the fact that despite border panic about a migrant “crisis,” both of these wealthy, powerful realms of the West shoulder just a tiny fraction of the global migrant burden.

Although the migration flows from Africa and the Middle East into Europe have intensified dramatically, the migrant “crisis,” in numeric terms, amounts to about 0.2 percent of the EU’s total population.

Meanwhile, net migration from Mexico into the United States has plateaued and border crossings aren’t dramatically rising, despite the Central American influx. Compared to relatively poor countries like Lebanon, Jordan, and Turkey, which have absorbed multitudes of refugees, the United States and the European Union have proven incredibly ungenerous to millions of the world’s most desperate individuals.

Rising waves of anti-migrant hostility reflects a widening empathy gap between the rich and poor hemispheres, and with it, all the racial and cultural divisions that demagogues ruthlessly exploit for political gain.

The unrest also represents a privatization of global rights. While trade and capital fluidly traverse borders, ordinary people pay the tolls of border passage in draconian privately -managed detention centers, or under the yoke of NGOs and security contractors to which border management is outsourced, often with little regard for humanitarian standards.

Yet widespread anti-immigrant hostility is pushing the global conversation on migration toward a broader transnational response. The United Nations secretary-general’s office has issued a blueprint for migration policy, ahead of an international summit in September, starting with the premise that migration is both unstoppable and every country’s responsibility, but that a migration crisis isn’t inevitable.

Covering many migration types, including conflict and environmental refugees and so-called “economic migrants” the report argues: “Rather than ‘preventing’ large movements of refugees and migrants, we must address the causes that force them to abandon their homes and communities,” and uphold an ethical obligation to protect and care, regardless of migrants’ reasons for moving.

In response to a “growing trend to criminalize irregular movements” in many countries, the UN memorandum underscores that “All refugees and migrants, regardless of status, are entitled to due process of law…and in no cases are collective expulsions permissible.” Moreover, as a matter of human rights, those falling outside the technical, often politicized qualifications for refugee status (the regulatory and legal barriers remain perilously stiff for desperate Central American asylum seekers in US courts, and the refugees stuck in the EU’s chaotic asylum and resettlement programs) nonetheless require host countries to “address the rights and needs of all those arriving with particular vulnerabilities, including older persons and persons with disabilities, regardless of migratory status.”

The recognition of vulnerable subsets among migrant populations, regardless of formal status, acknowledges blurred lines between economic migrants “of choice” and refugees “of necessity.”

Catherine Tactaquin, executive director of National Network on Immigrant and Refugee Rights, which advocates on both domestic and international migration issues, says the UN framework reflects an emerging understanding in migration policy debates that “migrants and refugees walk along the same path. There has to be a recognition of the commonality of these groups and [agencies should] not silo the individuals” by saying “These are good refugees, those are bad migrants.”

This is a question of social equity. The primary concern for EU member states is distributing resources for migrant resettlement, whereas the United States has a single, though dysfunctional, national system. But on both sides of the Atlantic, a lack of coherent regional policies and humanitarian standards stokes exploitative and violent migrant trafficking.

Europe also wrestles with opening welfare programs to refugees and immigrants. The US lacks strong social programs even for its own citizens, so the main legal dispute over migration here centers around a self-financed program of simply allowing immigrant families to attend school and work.

Demetrios Papademetriou, president of Migration Policy Institute, suggests European refugee policy is being challenged by huge inequalities of public resources among member states, which in turn limits many countries’ ability to absorb  and rehabilitate refugees.

“Asylum seekers require enormous investments…Some countries might be able to afford them for a (short) period of time,” he says via e-mail, “but the vast majority of EU countries can’t—especially considering their debt burdens, high unemployment, and the rise in populism.” Grappling with fears about external borders requires societal reckoning on the protective responsibilities of the state in increasingly globalized communities.

Yet a more humane system overall would involve a comprehensive braiding of social and labor protections as well as economic integration for migrants and citizens alike.

As international bodies struggle to create a long-term infrastructure for coping with a global migration, Tactaquin says, there’s a growing acknowledgement that “there has to be a bottom line of rights and protections, and a certain environment set for migrants in ‘normal’ times. Because when there’s an emergency situation, it only gets worse.”

The way a society treats its newest arrivals is a test of its democracy. Instead of treating migrants as a social burden and second guessing their motives for moving, what if the government trusted them enough to self-determine their own future, on whatever side of the border that happens to be?