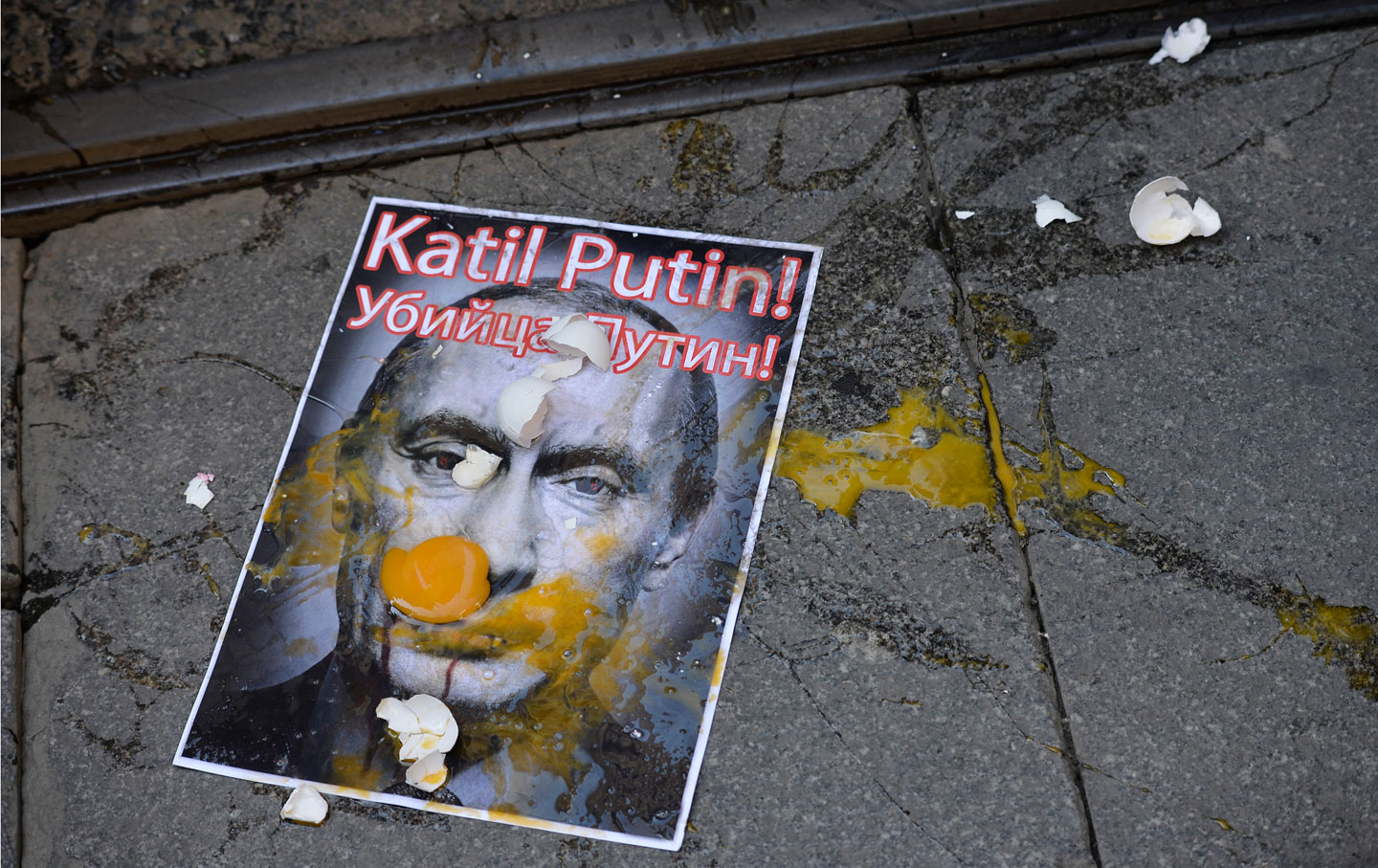 Since Russia commenced its bombing campaign over Syria last Wednesday a number of reports have claimed, among other things, that Russia’s air strikes have solely focused on targeting the so-called Syrian “moderates” in lieu of targeting the territory held by the Islamic State. Worse still, these stories claim, Russia’s involvement will only worsen the situation on the ground; and yet, paradoxically, Russia’s military doesn’t have the wherewithal to see their operation through.

Two stories that advance this confused narrative appeared in the news pages of The Washington Post on October 2 and 3, and not on its editorial pages, where one would normally expect to encounter such fare. The first indication that readers were to be confronted with an anti-Russian spin is that both stories were co-authored by the Post’s young neoconservative fellow traveller Andrew Roth, who has lately churned out such hard-hitting reports as “Live from New York: It’s Putin Speech Bingo.”

Alongside both “news” stories, Roth and his editors feature maps provided from none other than the Institute for the Study of War. For those lucky enough to be unfamiliar with the work of this militaristic think tank, some background may be in order. The Institute is run by arch-neoconservatives Frederick and Kimberly Kagan, and was instrumental in promoting the career of a serial fabricator by the name of Elizabeth O’Bagy who spent much of 2013—alongside the Russian oligarch–funded pundit Michael Weiss—clamoring for an American-led war against Assad.

Trafficking in little more than nonsense, they wrote in The Atlantic in June 2013 that “Eliminating the flow of men and materiel to Syria would not only hinder Assad’s chances for survival but also disrupt the Iranian mullahs’ takeover of the Levant.”

O’Bagy and Weiss will be granted no credit for prescience on that front. The real threat of a “takeover” of the Levant came—and continues to come—not from the Iranian “mullahs” but rather from the the sworn enemies of the Iranians, the Sunni Islamic State, which itself receives financial backing from the other Sunni Gulf state tyrannies: Saudi Arabia, Qatar, UAE, and Bahrain.

Iranian-backed Shia forces such as Hezbollah are fighting the very same enemies as the secular, Christian, and Alawite Assad forces. What Russia is now doing is flying air sorties in support of Assad’s army, which has had its back pushed up against the wall by ISIS for the past several months.

Russia has been rather upfront about what it is they are up to. In an interview which aired last Sunday on 60 Minutes, Charlie Rose told the Russian President that some “believe…that you are trying to save President al-Assad’s administration…and you are there to rescue them,” to which Putin replied, “That’s right, that’s how it is.”

This is not to say that The Washington Post has been alone in presenting a disingenuous picture of what is occurring on the ground in Syria. According to Yale’s David Bromwich, The New York Times, in a report published on October 2, castigated Russia for having the temerity to bomb US-backed “independent Islamists.”

Bromwich can hardly be the only one wondering: What exactly is an “independent Islamist?”

In any event, the Times and the Post aren’t alone among those pursing that particular narrative. On October 1, the UK’s Independent accused the Russians of unleashing bombing raids on what were said to be “terrorist targets but which, on early evidence, seemed to have included at least one CIA-backed rebel group.”

With due respect to the American Intelligence Community, are “CIA-backed rebel groups” and “terrorists” known to be—in all places and at all times—mutually exclusive designations? Even cursory knowledge of the history of America’s involvement in Latin America and Afghanistan in the 1980s, to take but two examples, would suggest not.

Which brings us back to The Washington Post report of October 2, the point of which was to inform readers that Putin, let off the leash by the international community, is breaking his word in focusing his wrath on the US-backed Syrian innocents who comprise the “moderate opposition.”

Roth and Post reporter Liz Sly report that the general impression that the US-backed rebels are far outnumbered and outgunned by both Assad and the IS Group is, in fact, all wrong, and that they had been making much (until now, it must be said, unheralded) progress in their fight against Assad.

Assad, it is worth repeating, is himself being targeted by the same forces that attacked Lower Manhattan on 9/11. That the enemies of Assad are—and will remain—our enemies too often gets lost in the reporting and analysis.

Further, we are informed that “continued airstrikes Friday suggested that Russia’s main priority remains the anti-Assad rebellion in northern and western Syria, which poses a greater threat to the regime’s control over Damascus, the capital, than the forces of the Islamic State, concentrated in the far north and east of the country.”

This is a rather masterful insinuation of Russian malfeasance where none exists. The airstrikes don’t merely “suggest” that that is Russia’s “main priority”: saving Damascus and ensuring the survival of the Assad regime has been Russia’s stated goal from the start.

The problem with the Post’s report is that it is undergirded by an assumption that only exists in Roth and Sly’s imaginations: If Russia would focus its firepower solely on ISIS, then the US-backed moderates would be able to swoop in to Damascus, peacefully overthrow Assad, and all shall be well.

The problem with this fantasy is that the moderates themselves are not “moderates” in any meaningful sense of the word, and Russia is not going to let Assad fall to them, to ISIS, or to anyone else.

But for the reporters at the Post, hope for a Russian failure springs eternal, and so the following day, October 3, Roth returned with a new co-author, Thomas Gibbons-Neff, to tell us that the Russian bear, which had seemed to be doing so much harm to our “moderate” Syrian allies, is actually little more than a paper tiger.

What, they ask, “can a limited deployment of Russian air power actually accomplish?”

According to the analysts Roth and Gibbons-Neff claimed to have spoken to, “unless it is significantly strengthened, Moscow’s contribution is unlikely to be decisive in the war.” Which analysts? Nobody knows, as the reporters don’t say.

Roth and Gibbons-Neff continue: “Russia faces several limitations in what it can accomplish with its forces in Syria. One is the age of its equipment.” So, perhaps, just maybe the Russians will fail in its mission to save a largely secular, multi-sectarian—and, yes, brutal—government from the hands of radical religious fundamentalists, leaving in its wake what the US-backed Sunni tyrannies of the Persian Gulf have so long desired: a Sunni-controlled Syria.

And it is then—when a radical Sunni fundamentalist state controls the entirety of Syria—that the real problems will begin.