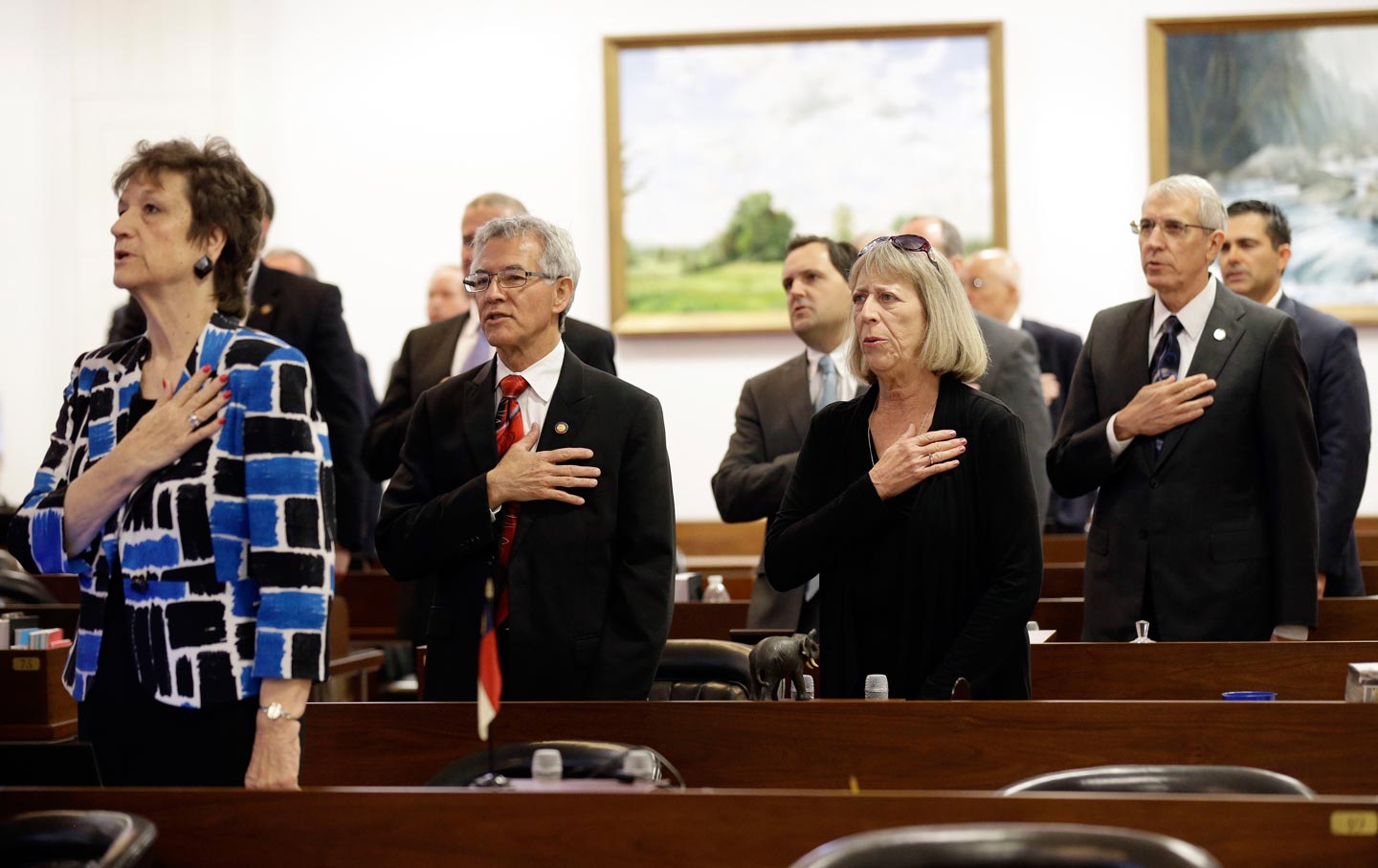 North Carolina lawmakers gather for a special session to remove protections to transgender people to use the restroom of their gender identity. (AP Photo / Gerry Broome)

North Carolina has now jumped to the front of the line of states pushing “bathroom bills”—laws that prohibit transgender people from using the facilities that are right for them. Here is my question for the lawmakers who enact these laws: Which facilities do you want trans people to use? Because I don’t think you have thought this through. Or let’s start with a more basic question: Are you trying to eradicate transgender people altogether? Trans people exist. They are human beings. They have just as much right to exist as you do. They are not going to disappear, and if what you really want is to make them disappear, then you are hoping for genocide. Good people don’t hope for genocide.

Let’s break this down. Some bathrooms are segregated by gender—they are limited either to men and boys or to women and girls. Some bathrooms are not, by the way. There is usually no good reason to designate single-occupancy bathrooms for “men” or “women” only, and even multiple-occupancy bathrooms do not always draw these lines. But some do, and that means sometimes we need to categorize people based on gender when they go to the bathroom. What is the best way to do that?

One answer is to respect a person’s own identity—the identity a person presents to the world through personal appearance, dress, and how the person describes himself or herself. Generally, this means that people who look like men will use men’s rooms and people who look like women will use women’s rooms. Do trans people sometimes attract attention because of their appearance? Sure, sometimes. So do people who are not trans. Imagine that a woman who is not transgender goes to use the bathroom, and someone—another woman, or a man who sees her entering the facility—gives her a hard time because she does not look feminine enough. Or imagine that a guy enters a men’s room and other people give him a hard time for having a slight frame or a soft voice. Anyone who did those things would be a jerk, right? And good people don’t act like jerks. So that’s one answer: Respect people’s identities, and recognize that the problems—if there are any—may be coming from people who are acting like jerks.

Then there is the answer that proponents of these “bathroom bills” want: Check people’s genitals. Let’s start with the obvious. That’s creepy. I don’t know the first thing about the genitals of the overwhelming majority of people I encounter, and it is not information I generally need or want. If I somehow became aware that a person’s genitals did not look like what I might vaguely have assumed, that fact would be none of my business. I cannot imagine how such information would affect any of my dealings with a friend or associate, and it creeps me out that some people think that it should.

Proponents of these “bathroom bills” often talk about protecting children. The lieutenant governor of North Carolina released a video to justify that state’s terrible new law in which he repeated the hysterical claim that policies that treat trans people respectfully would help “sex offenders and pedophiles” prey on “women and children.” This is absurd on its face. No one is allowed to lurk in a bathroom for improper reasons, regardless of gender; no policy about respecting trans people would ever change that; and protecting trans people does not put anyone else at risk. But you know who I do want to keep away from the children in my life? Anyone who spends his time trying to figure out how to pass a law that would make other people’s genitals his business.

Beyond the creep factor, the whole thing is impractical. When, exactly, do you encounter someone else’s genitals in a public restroom? In a women’s room, the answer should be never, since people do their business in closed stalls. And in a men’s room, that’s only going to happen if you are standing at a urinal with no privacy barriers and you let your eyes wander. Well, most trans men don’t use urinals, and more to the point, keep your eyes to yourself. It’s not as though there is some trending problem of trans people lewdly flashing their genitals in bathrooms, and such behavior is illegal anyway, no matter what bathroom you’re in. So don’t worry.

More to the point, this “solution” is not what you want. If you are a woman, and it matters to you who uses the bathroom, and some dude comes into the women’s room with you, and you confront him, will it make you feel better when he says, “It’s cool, I have a vagina”? Trans people won’t stop having to use the bathroom just because politicians passed a mean-spirited law.

Supporters of these laws want to exile trans people, exclude them from the public square, cast them out.

All of that leads to the genocide point. That’s an inflammatory word, but it is an important word, because it forces us to confront what is really going on here. The only way these “bathroom bills” make any sense is to imagine that they will make trans people cease to exist altogether. Supporters of these laws don’t want trans dudes to use the ladies’ room or trans women in men’s rooms. They want to exile trans people, exclude them from the public square, cast them out to some faraway place. Some of them may imagine that trans people can be eradicated. Casting out innocent people is cruel. Imagining that people can be legislated out of existence is an ugly genocidal fantasy.

If you are worried about privacy in restrooms, let’s address privacy in restrooms, not demonize trans people. If you are concerned about rape and sexual assault, let’s do something real about rape and sexual assault, but that terrible affront to human dignity has nothing to do with the bathrooms that trans people use. And if what you really want is for trans people to cease to exist, then you need to realize that is never going to happen—and it is not something you should ever wish for.