Still from The Maid (2018) by Carissa Rodriquez. (Courtesy the artist and Karma International, Zurich/Los Angeles)

Much of the world’s art is inaccessible to “ordinary” people. For every piece on display in a museum, a hundred others are hidden in vaults. A recent survey of major museums found that most of Georgia O’Keeffe’s paintings are in storage and that, of 53 Egon Schiele drawings, none are on display at the seven museums that hold them. There are often good reasons for this imbalance—lack of space, preserving fragile works, research purposes. But on the other hand, institutions that would rather be known as contributors to public life also end up acting as tools for enriching their founders and donors with sizable tax breaks. Many millions of dollars’ worth of art is also housed in private collections large and small. Their key pieces by important names are carted out for major exhibitions and retrospectives, then shuttled back to accrue value as assets and to decorate the homes of the wealthy.

The Maid, a video by Carissa Rodriguez, on view at SculptureCenter in the New York City borough of Queens until April 2, takes the viewer through the “lives” of some artworks so housed. Beginning with slow, tracking drone shots reminiscent of a music-video opening, the camera approaches various homes—a mansion in Los Angeles, a townhouse on New York’s Upper East Side, both surrounded by lush greenery—then zooms in through a window. After panning across rooms, like a realtor’s gaze, and capturing the pieces of contemporary art on the walls—a series of uncharacteristically orange On Kawara date paintings, for example, light up with sunshine—the camera settles into a meditative stillness.

The video’s main focus is a collection of sculptures by Sherrie Levine, Crystal Newborn (1993) and Black Newborn (1994), which were modeled after the bronze and marble sculptures by the early-20th-century Romanian artist Constantin Brâncuși. The Newborns are an edition of 12 in each colorway, the two dozen total offering a sly comment on the reproducibility of an original—an allusion to Brâncuși, of course, but also to Marcel Duchamp’s readymades. One imagines them at the market, nestled together like two cartons of eggs.

Made of sandblasted glass, the Newborns are so sleek and seamless that, at first glance, on video, they can appear to be digitally rendered. One rests on a table with a polish so high that the sculpture is perfectly reflected upside down. One lives in a quiet home where small blond children read aloud in French. One sits next to a photograph of Bill and Hillary Clinton grinning. Each is perfectly balanced. Each has a glowing magnetism. The camera pans slowly around each piece, considering the heavy-looking ovoids, sometimes dipping below the surface of a table as though it were being submerged underwater, rising to glimpse the sculpture’s other side.

The warm instrumental version of Frank Ocean’s “White Ferrari” gradually becomes more prominent in the background, lending the work an intimate, evocative feeling, and conjuring the lyrics without actually featuring them: “Bad luck to talk on these rides…” The camera is so steady, and the surroundings so quiet, that we are given the inescapable feeling of being voyeurs in a series of homes we will never live in.

The houses are lovely and well-kept. Who cleans them? The art is precious and preserved from damage. Who sees it?

About halfway into the video’s 12-minute run, we are taken to the cavernous warehouse of the Los Angeles County Museum of Art. Here, two of Levine’s Newborn sculptures are carefully packed. A handler removes their swaddling with gloved hands, pulling the coverings off like a caul from a baby’s face. They are placed into bean-bag-like cushions, where they rest momentarily before one is moved to a gallery shelf next to the label “Crystal Newborn, Sherrie Levine.”

Knowing that Levine’s sculptures are themselves replicas of Brâncuși’s work spurs the realization that art endlessly cycles through its own history for subjects. Levine, who is known by critics as an appropriation artist, first emerged on the New York scene in the 1980s by making photographs of Walker Evans photographs, which were so indistinguishable from the real thing that they both enraged and captivated viewers—the latter perhaps due more to Evans’s original compositions than Levine’s ingenuity. Along with Evans and Brâncuși, Levine has also riffed on Duchamp, Donald Judd, Piet Mondrian, and Alfred Stieglitz. In 2011, The New York Times described her Newborn series as “veering too closely to museum-gift-shop fare,” and seeing their inert placement in wealthy homes highlights the art object’s status as commodity.

Rodriguez’s appropriation of Levine’s work, then, adds yet another layer of feminized labor to the art product. The sculptures become domestic objects, situated uneasily within parameters of value and care. Who packages the Newborns? Who dusts them? Who keeps the table so highly polished? Those who care for the art often cannot afford to own it, much in the same way that domestic labor is often carried out by mothers who must forgo taking care of their own children. The Maid also scrutinizes what it is that the owners of art actually value—and what demands their lifestyle makes on the lives of others. The video’s only fault might be that its production values are so high that, like Levine’s sculptures, it feels bloodlessly seamless.

In the last sequence of The Maid, another beautiful drone shot establishes the setting: an uptown Manhattan townhouse, home to another of Levine’s Newborns, aglow with lights and falling snow. As night descends upon the city, the camera zooms from on high through a window of the home. There is a figure inside, moving. She’s cleaning.

From a small side gallery at SculptureCenter, the sounds of children’s laughter and playing filter into the main room. Given the domestic undertones of The Maid, it’s unclear at first whether the laughter is intended to be part of the soundtrack. But playing in the second gallery is another work by Rodriguez: The Girls, a 37-minute, single-channel video. In the late 1990s, Rodriguez shot hours of Hi8 footage of various young girls playing in a busy Chinatown park, waiting for each of them to make eye contact with the camera. The camera lingers on a different girl in each take after that eye contact is established. One girl is curious, even wary, glancing over her shoulder, her eyes constantly flicking back to the camera, her chubby cheeks impassive; another acknowledges the camera and the pleasure of being seen, grinning and performing for the far-off lens.

The girls are young; seeing them on video is charming, in the way that videos of children usually are. But the grainy, shaky zoom reminds us that Rodriguez’s camera is an intrusion into their lives, and the length of the video exaggerates the uneasiness that the viewer begins to feel about watching them. The camera unceasingly follows each girl as she moves, occasionally zooming in on an object of interest: chunkily sneakered feet navigating a play structure; a long, dizzying shot of the print on a diaper bag, the camera focused in so tightly that it’s almost impossible to keep anything in the frame. We cannot look away, or at anything else, as we follow Rodriguez’s eye. Her curiosity, for the most part, drives the camera, lingering on details the way artists do, and the individual scenes end only when she is discovered—when a mother makes eye contact with the camera, too. 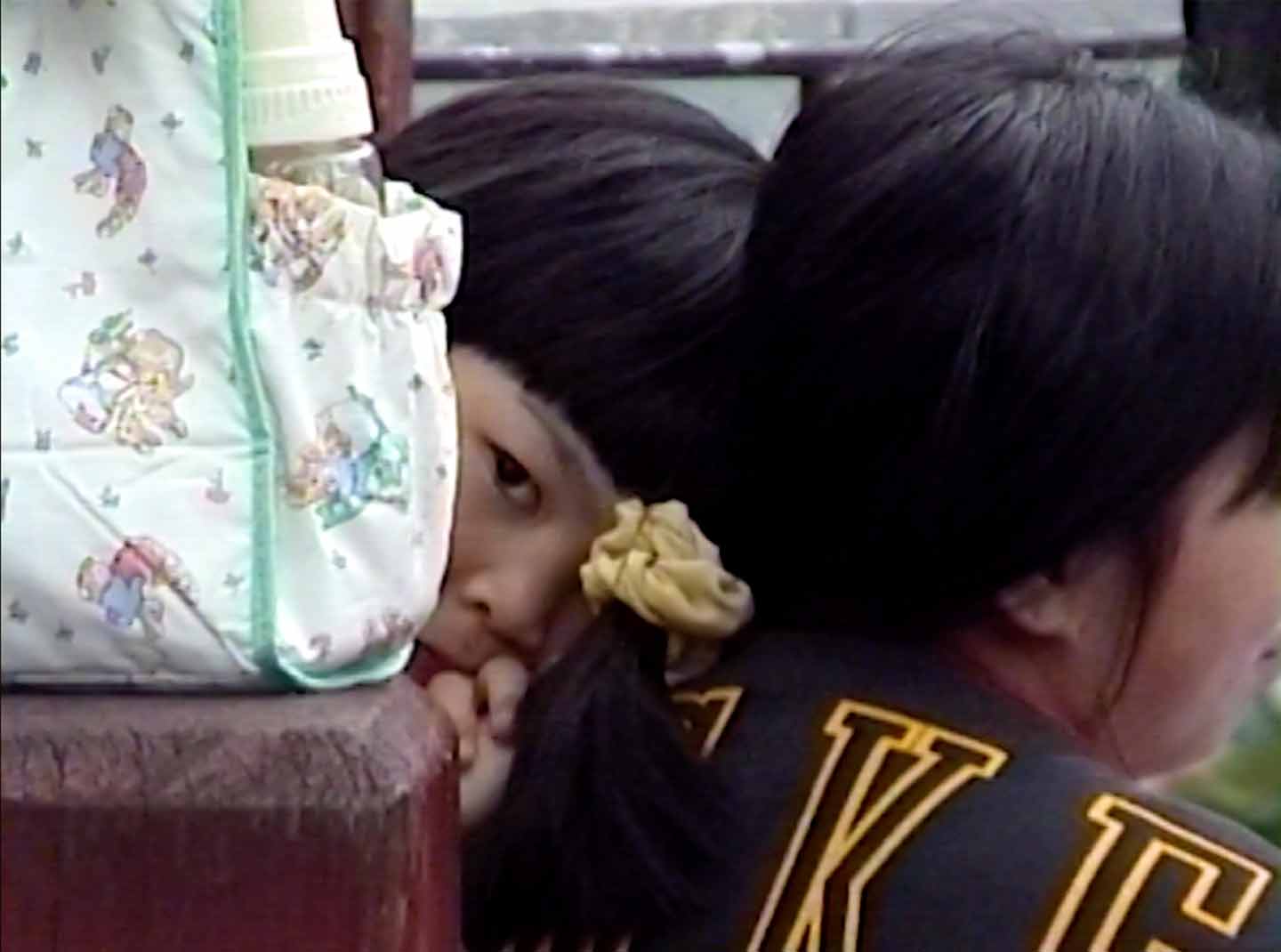 Still from The Girls (1997-2018) by Carissa Rodriguez. (Courtesy the artist and Karma International, Zurich/Los Angeles)

Over the course of the video, the intensity of Rodriguez’s gaze eventually becomes exhausting, even unsettling. Next to The Maid, The Girls heightens and sharpens the sense of voyeurism in the show, and further genders it. Its grainy footage is a startling contrast to The Maid’s slick production, its narrative left open-ended, as opposed to a tight resolution. One wonders about the ethics of making such a work. Who were these girls? What does it mean to consume their images in this way? Who are they now, and did they ever realize that they ended up in this video?

Nowadays, though, nothing is spared from the lens; everything is recorded and documented and watched—a cute animal doing an amusing trick; cell-phone footage of a car accident or a natural disaster or an instance of police brutality; another cute animal. Thanks to advertisers and social-media algorithms, video has come to dominate the fields of entertainment and news. It’s not uncommon to encounter auto-playing video on websites and social-media feeds. That people don’t read is often stated as a fait accompli. Taken together, The Maid and The Girls turn the medium on itself. By emphasizing video’s power as a deliberately narrative tool, as in The Maid, and by forcing us to be complicit in the camera’s unceasing gaze, as in The Girls, Rodriguez troubles our assumptions about the medium. Instead of videos that circulate as ostensible documents of truth, only to reinforce conventional ideas, Rodriguez’s work leads viewers to scrutinize our choices and values as they relate to this ubiquitous instrument of commerce and power. What becomes of art, of privacy, of free living, when we find ourselves so often present on both sides of the lens?