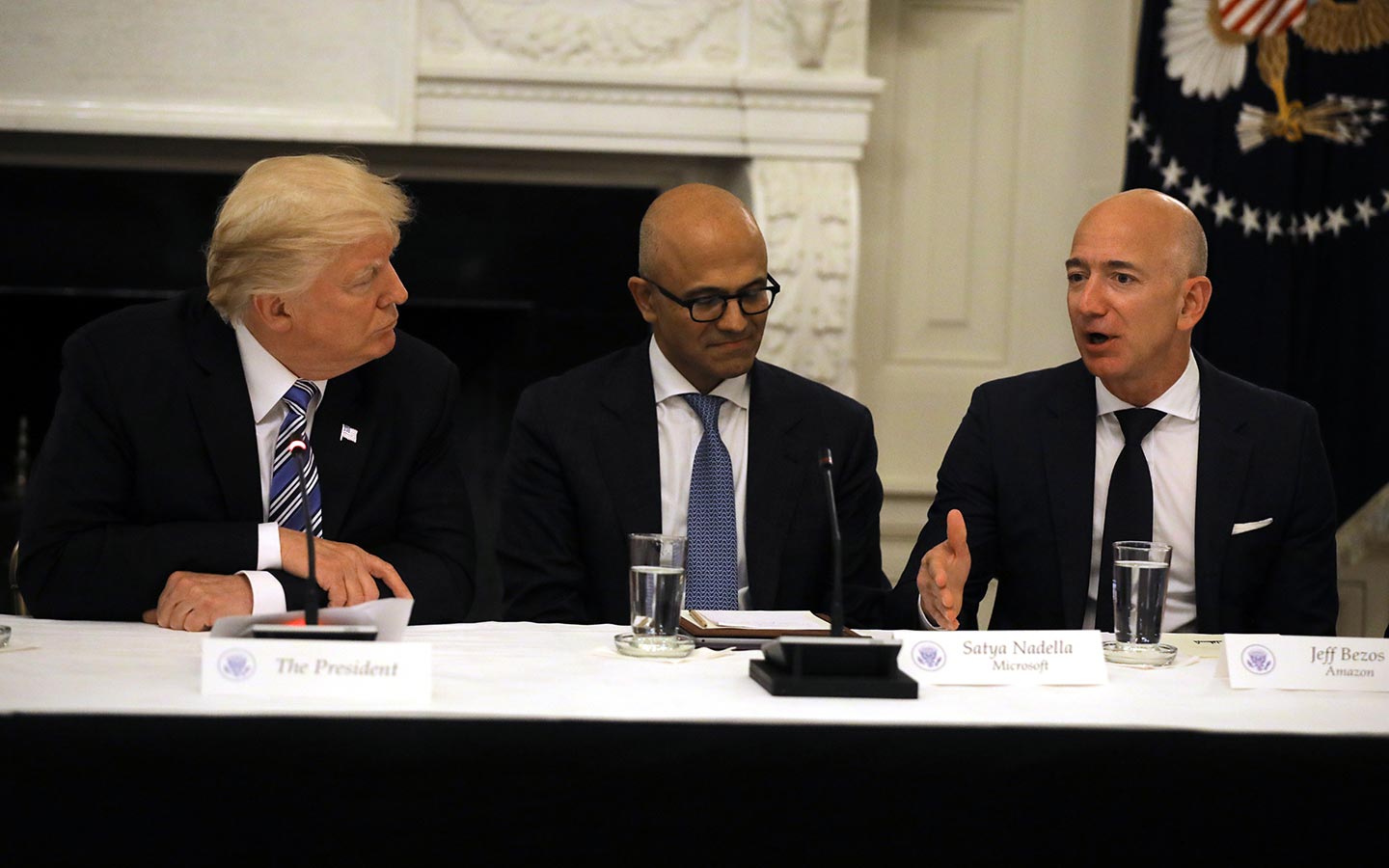 President Donald Trump has been shouting about Jeff Bezos and Amazon for months, mostly out of pique at press coverage in The Washington Post. This raised the prospect of government action against Amazon simply because Trump didn’t like his media clips. But like almost everything with Trump, he was just blowing hot air: Yesterday, his Federal Trade Commission handed Amazon its biggest victory yet. The First Amendment has been spared, but consumers, workers, and small businesses have not. The decision will have dreadful long-term effects, and the FTC did it with all the seriousness of an intern scheduling a lunch meeting.

Here is the FTC statement on the merger of Amazon with grocery chain Whole Foods, from acting Bureau of Competition director Bruce Hoffman. It’s 67 words long: “The FTC conducted an investigation of this proposed acquisition to determine whether it substantially lessened competition under Section 7 of the Clayton Act, or constituted an unfair method of competition under Section 5 of the FTC Act. Based on our investigation we have decided not to pursue this matter further. Of course, the FTC always has the ability to investigate anticompetitive conduct should such action be warranted.”

Amazon and Whole Foods announced the deal in June. The typical timeline for an antitrust investigation is measured in years, not months, especially for ones this controversial. The grocery industry spun into upheaval on the news, losing tens of billions of dollars in value. Many members of Congress expressed concern and called for hearings. Academic researchers warned about Amazon’s size, and questioned whether the shift into another business line, giving them a physical space in hundreds of communities, would further pressure competitors.

The FTC waved this away in three sentences. To come back in two months after an “investigation” with this perfunctory statement is to admit that no investigation was done at all. So, starting Monday, Amazon and Whole Foods will merge.

Why did this happen? The FTC’s evaluation of the deal was based on outdated tools for understanding competition. Therefore, it was predetermined to find nothing. It was a classic “looking under the streetlight” problem.

Under the traditional “consumer welfare” standard, as long as a proposed merger doesn’t increase consumer prices, antitrust authorities will allow it. The Amazon–Whole Foods tie-up would control only 3.5 percent of the overall grocery industry, seemingly not enough to impose market power. Amazon barely had a presence in grocery sales prior to this, making it more of a “vertical” integration, which consumer-welfare adherents believe increases efficiency and reduces prices. And Amazon is famous for undercutting competitors, not forcing prices up. Therefore, under that standard, the FTC had no grounds on which to block the deal.

It’s an airtight case. It’s also the absolutely wrong way to look at this merger.

Think of a store as a meeting point, where hundreds of producers congregate to get their products in front of willing customers. The store owner decides where the products sit on the shelf and what gets the most support, and tracks sales. Now imagine that the store owner also makes products, and then puts out replica versions of everything that does well. The combination of marketing and a sort of corporate espionage inevitably leads to a situation where everything in the store is furnished by the store’s owner.

That’s what Amazon does, and it now has bought more data on the tastes and preferences of high-end shoppers at 450 desirable locations. This isn’t about groceries per se; it’s about dominating commerce in online and offline locales.

Whole Foods suppliers, frequently small businesses dependent on access to these markets, are sitting ducks. If they’re not being told to cut costs to the bone to retain access—to both Whole Foods’ and Amazon’s online markets, a key source of leverage—they’ll find an Amazon version of whatever they sell, in a better location in the store, at a discount (at least to start; Amazon has shown a willingness to lose money for years in a market to eliminate competition). Controlling distribution and manufacturing products is a deadly combination, and clearly anticompetitive.

Whole Foods uses local farms for meat and produce, and the potential for Amazon to squeeze their businesses prompted Food and Water Watch to call for an extended review. “Amazon’s proposed takeover of Whole Foods could destroy long-standing arrangements with local farmers as the e-commerce giant pushes for larger scale suppliers and unreasonably low prices,” said Food & Water Watch Executive Director Wenonah Hauter in a statement.

That phrase “unreasonably low prices” may sound fatuous to FTC officials. But they ought to think long-term. Edging out competing producers leads to inevitable consumer price gouging once market power is established. And there are implications for quality if local food economies are disrupted in favor of Big Ag. Wages at small food-manufacturing businesses and family farms would suffer as well.

This has already begun. Today, Amazon announced that it will immediately lower prices on “a selection of best-selling staples,” including organic avocados, bananas, brown eggs, kale, apples, and more. That’s a direct cut to the suppliers who sell these items, and deliberate predatory pricing to attract customers away from other grocery stores. They’ve also announced that Whole Foods’ 365 in-store brands will be available at Amazon’s suite of online outlets. Expect them to get prime digital space and weaken competitor market share.

Amazon also announced that Amazon Prime, the $99-per-year subscription service that offers free delivery and movie and music programs, will become the customer-rewards program for Whole Foods. Prime shoppers will get “special savings and other in-store benefits” and non-Prime shoppers won’t. So you have to pay $99 to save money at Whole Foods. This is another way to make Prime a must-have for households.

With 450 stores, Amazon now has a physical base in its most important cities for distribution and pickup. It has just announced that Amazon Lockers will be available in Whole Foods stores, meaning a customer can buy a product on Amazon and have it sent to their personal locker at their grocery store. Attach that to the Amazon Echo, the smart speaker that makes purchases as simple as saying “get me tomatoes,” and competitors, not just from groceries but other retailers, online delivery companies, and so on, appear doomed. Amazon isn’t building a grocery store but a company store.

There’s also the likelihood of dynamic, personalized pricing. Amazon has been accused of touting “discounts” online that aren’t discounts; the FTC actually has an existing investigation about this. Price discrimination in store based on who is purchasing the product and the data collected on them is very possible.

And you cannot ignore the impact on workers. Whole Foods is non-union in a mostly unionized industry, mainly because the company gave workers good wages and benefits. Just look at the way Amazon treats warehouse workers, and you know that may not continue. Plus, other groceries now needing to compete with Amazon could seek safety in consolidation, eliminating redundant or low-profit locations. That could further the retail apocalypse, which has cost nearly 100,000 jobs this year, and affects communities well beyond upscale Whole Foods locations.

Just the idea that a big company can buy its way into new markets is dangerous, which everyone gets except for the FTC. Whenever Amazon announces a move into a new market, stocks in its new competitors plummet. Investors recognize the hazards of leveraging power.

The government used to discourage this. The Microsoft antitrust case was about a company’s using its dominance in operating systems to try to control browsers and other software. In the 1940s the Supreme Court ruled that the A&P grocery chain used its dominant economic position to demand discounts from suppliers; in the 1960s the Court blocked a grocery merger that would have created only 7.5 percent market concentration in the Los Angeles region.

That skepticism of monopolies has been wrung out of government’s thinking by 40 years of corporate propaganda. The FTC is now woefully unequipped to deal with emerging concentration from 21st-century monopolies like Amazon. And the consequences will be felt in the future by everyone who needs to stock their refrigerators.