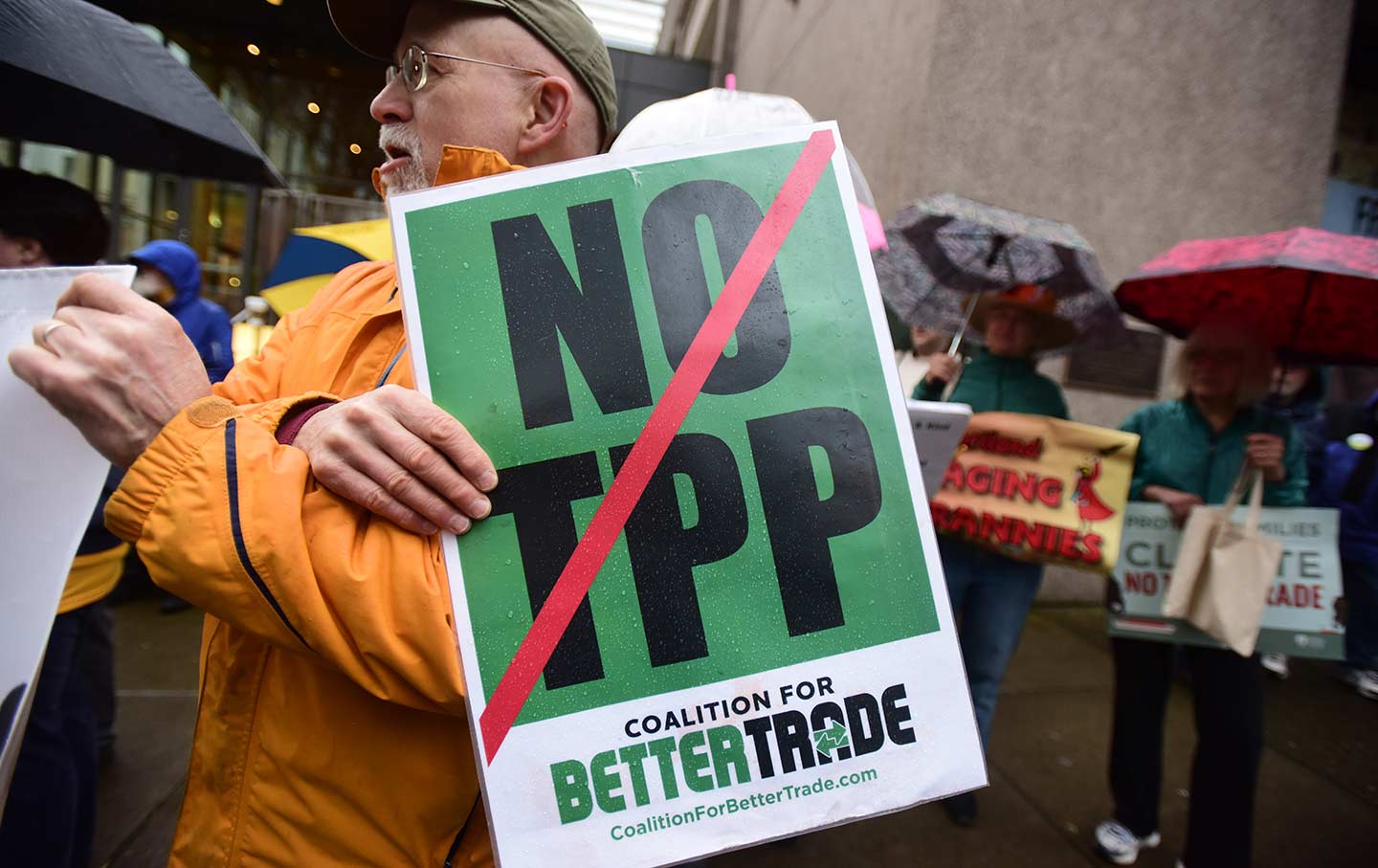 The popular fury over trade policies that have devastated American communities is rarely taken seriously by the political and media elites that keep trying to narrow the national political discourse into an endless loop of empty discussions about personalities and tactics. But trade is a huge issue on the ground in states where Americans actually vote.

The races for both the Republican and the Democratic presidential nominations have exposed the intensity of concern about the damage done by the North American Free Trade Agreement, normalization of trade relations with China and a host of lesser global agreements to workers in battleground states across the country. Indeed, the “surprise” results in Democratic primaries in states such as Michigan and Indiana can be traced in no small measure to a sense that the winner of those primaries, Vermont Senator Bernie Sanders, was firmer in his opposition to the next big trade deal: the proposed Trans-Pacific Partnership agreement.

Voters are justifiably angry about past trade deals, which were written to favor the interests of multinational corporations over those of workers, the environment, labor rights, human rights, and democracy.

And they are justifiably frightened by the prospect that the TPP could make things much worse.

TPP is “part of a global race to the bottom to boost the profits of large corporations...” —Bernie Sanders

The United States International Trade Commission has just released a long-awaited “report on what critics have decried as the NAFTA on steroids” proposal for a Pacific Rim trade deal. The report was expected to make a strong case for the agreement. Instead, it barely makes a case at all. So modest is the argument for the TPP that it was characterized by Politico as a “mildly positive” document with a “mixed” projection for how the TPP would influence the US trade deficit and the bad news that “the oil, coal, chemical, auto parts, forestry, leather and medical device industries could see slower growth than without the agreement.”

Lori Wallach, the director of Public Citizen’s Global Trade Watch, points out that “This report spotlights how damaging the TPP would be for most Americans’ jobs and wages given it concludes 16 out of 25 US economic sectors…”

Instead of strengthening the argument for the TPP, the congressionally mandated study of how the sweeping agreement might help or harm the US economy is heightening the level of concern.

Economist Dean Baker, the co-director of the Center for Economic and Policy Research and an internationally respected expert on trade and employment issues, notes that “The overall projected gains to national income by 2032 are $57.3 billion or 0.23 percent. Since this gain is realized over the next 16 years, it implies an increase to the annual growth rate of just over 0.01 percentage point. In other words, the USITC projects that as a result of the TPP, the country will be as wealthy on January 1, 2032 as it would otherwise be on February 15 of 2032.”

“I oppose the TPP agreement—and that means before and after the election.” —Hillary Clinton

Critics of the agreement—which President Obama and Republicans in Congress are still trying to advance this year—are actually using the new report to make the case against the TPP.

“This ITC report is so damaging that any reasonable observer would have to wonder why the Administration or Congress would spend even one more day trying to turn this disastrous proposal into a reality,” says AFL-CIO President Richard Trumka:

Even though it’s based on unrealistic assumptions, the report could not even produce a positive result for U.S. manufacturing and U.S. workers. One of many shockers is just how meager the purported benefits of the TPP are. A mere .15% of GDP growth over 15 years is laughably small—especially in comparison to what we’re being asked to give up in exchange for locking in a bonanza of rights and privileges for global corporations. Even though the report fails to account for currency manipulation, wage suppression and the negative impacts of uninspected food imports and higher drug costs, the study still projects the TPP will cost manufacturing jobs and exacerbate our trade deficit.

Trade policy was already a big issue in the 2016 presidential race, and the ITC report will make it a bigger issue. Sanders will continue to denounce the TPP as “part of a global race to the bottom to boost the profits of large corporations and Wall Street by outsourcing jobs; undercutting worker rights; dismantling labor, environmental, health, food safety and financial laws; and allowing corporations to challenge our laws in international tribunals rather than our own court system.” And he will make demands for firm opposition to the deal a key focus of platform fights before and perhaps during the Democratic National Convention in Philadelphia.

Sanders argues that it is essential for Democrats to be absolutely clear in their opposition to the TPP because Republican Donald Trump will continue try to attract working-class voters by railing against the “crony capitalist” deals. (It turns out that Trump’s the crony capitalist—Bloomberg reports that he actually invested in companies he has denounced for outsourcing—but his complaints about “bad deals” resonated in the Republican primary race, helping the billionaire to frame himself as an anti-establishment candidate.)

Pressured by Sanders and his supporters, and conscious of the threat posed by Trump, Democratic front-runner Hillary Clinton will continue to become more precise and focused in her criticism of the deal. The former secretary of state, who once suggested that “this TPP sets the gold standard in trade agreements,” has grown increasingly ardent in her expressions of disapproval. Earlier this month, Clinton indicated that she is opposed to a post-election “lame-duck” vote by Congress to accept the agreement. “I have said I oppose the TPP agreement—and that means before and after the election,” she told the Oregon Fair Trade Campaign.

Even if political and media elites refuse to recognize how central trade issues have become in the 2016 campaign, the candidates are recognizing that, for voters across America, failed trade policies—and the more-of the-same threat posed by the TPP—have to be addressed as part of any serious debate about the future of the American economy.