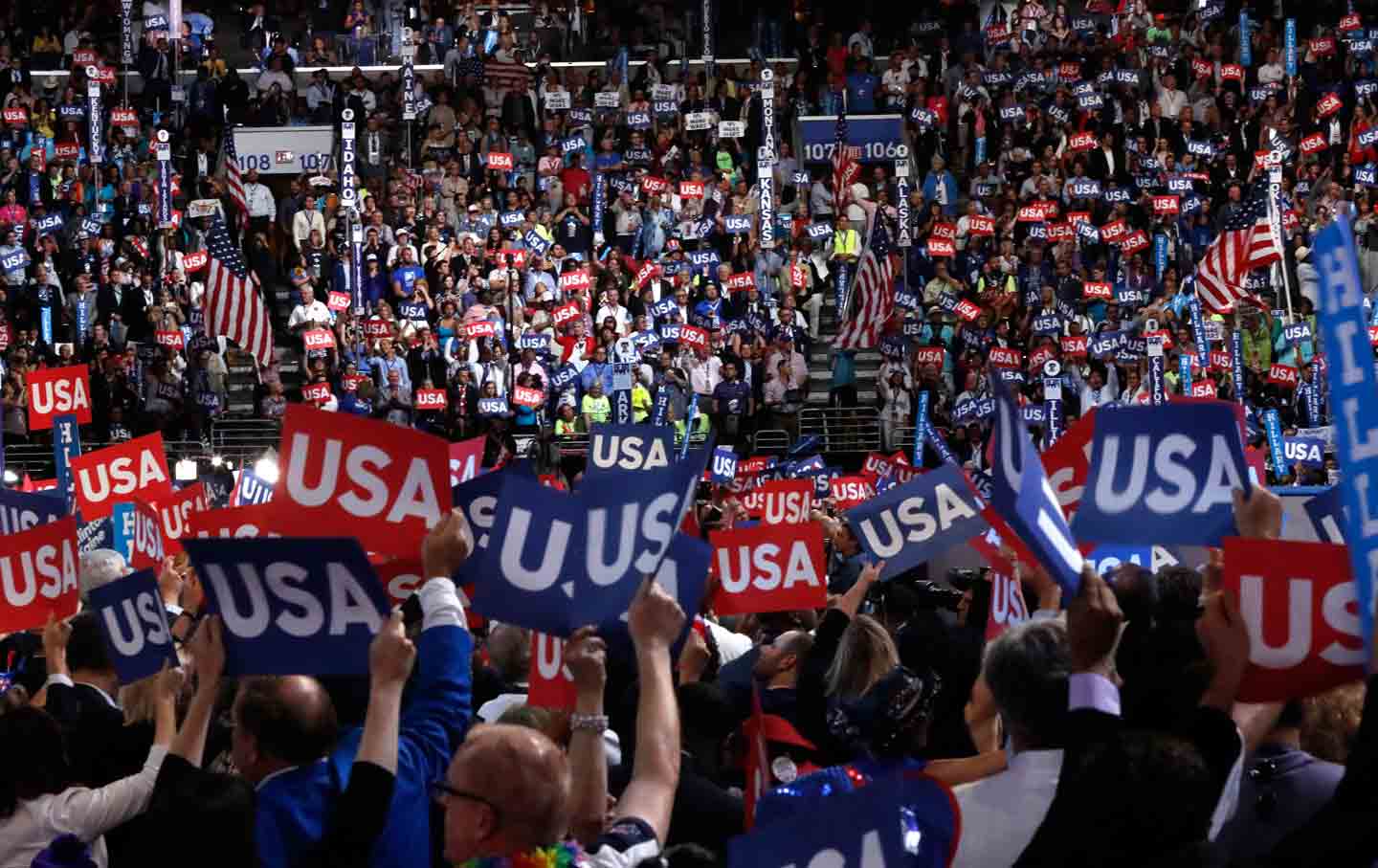 Signs are held as Gen. John Allen speaks during the final day of the Democratic National Convention in Philadelphia on July 28, 2016. (Paul Sancya / AP Photo)

Watching retired Marine Gen. John Allen deliver his raucous endorsement of Hillary Clinton on the final night of the DNC brought to mind H.L. Mencken’s bon mot, “In the United States, doing good has come to be, like patriotism, a favorite device of persons with something to sell.”

And on Thursday night, General Allen was selling Hillary Clinton. Allen, of course, isn’t the first—and he won’t be the last—American general to enter the realm of politics. But his speech and its reception suggest that the hero worship of military figures since 9/11 has gotten, shall we say, a touch out of hand. It is long past time for a course correction.

Allen bellowed that he and the numerous retired generals and admirals standing behind him simply “could not stand on the sidelines” because, should Hillary Clinton not emerge victorious in November, the world will become “a dark place of discord and fear.”

Allen not-so-humbly declared that “the free people of the world look to America as the last best hope for peace and liberty for all humankind,” and then shouted, “We are the greatest country on this planet!” While it’s clear he sought to project solicitude for “our allies” in his address, it seems not to have dawned on him that nothing alienates America’s allies (particularly in Europe) like the bombastic, self-congratulatory rhetoric he was indulging in.

Allen’s nationalist remarks were greeted with loud chants of “USA! USA! USA!” from delegates. When Allen finished, MSNBC’s Brian Williams observed that his was the kind of speech one might expect from someone who had spent 37 years in the Marines. Worryingly—but, let’s face it, unsurprisingly—instead of raising questions about Allen’s nationalist speech, his MSNBC cohosts merely emitted nervous giggles of agreement.

To illustrate just how badly the Democratic Party has fallen for the charms of militarism, it might be useful to compare the boisterous nationalism of Allen to the cautious sentiments of another general turned politician.

On January 17, 1961, as President Dwight D. Eisenhower prepared to hand over the reins of power to John F. Kennedy, the former supreme allied commander warned with great foresight that “Our military organization today bears little relation to that known by any of my predecessors in peacetime. This conjunction of an immense military establishment and a large arms industry is new in the American experience.” Eisenhower cautioned that this “total influence—economic, political, even spiritual—is felt in every city, every Statehouse, every office of the Federal government.”

Anticipating by many decades the influence that militaristic think tanks like the Center for a New American Security, the American Enterprise Institute, the Heritage Foundation, and the Brookings Institution, as well as the lobbyists of Lockheed Martin, Boeing, and Raytheon, now have on the formulation of US foreign policy, Eisenhower urged those in government to “guard against the acquisition of unwarranted influence, whether sought or unsought, by the military-industrial complex,” because “the potential for the disastrous rise of misplaced power exists and will persist.”

As the nation’s chief diplomat, Clinton displayed a marked preference for military rather than diplomatic solutions.

And persist it does. Ironically, during her tenure as the nation’s chief diplomat, Clinton displayed a marked preference toward military rather than diplomatic solutions. She supported the “surge” in Afghanistan (2009) and the war in Libya (2011). She repeatedly attempted to sunder the “reset” policy with Russia (2009–12) and urged greater American involvement in the Syrian Civil War (2011–present).

Since leaving office she has repeatedly called for the United States to send arms to Ukraine and for a no-fly zone over Syria. In a clear sign that Clinton is prepared to ramp up the war effort in Syria, her longtime confidante, former defense secretary Leon Panetta, recently told CBS News that he believes “the likelihood is that the next president is going to have to consider adding additional special forces…to try to assist those moderate forces that are taking on ISIS and that are taking on Assad’s forces.”

It will take citizens who understand the danger of which a former Republican president warned to hold accountable a civilian leader who has too often ceded her judgment to a political-military establishment responsible for too many of the foreign-policy blunders of the past decade.