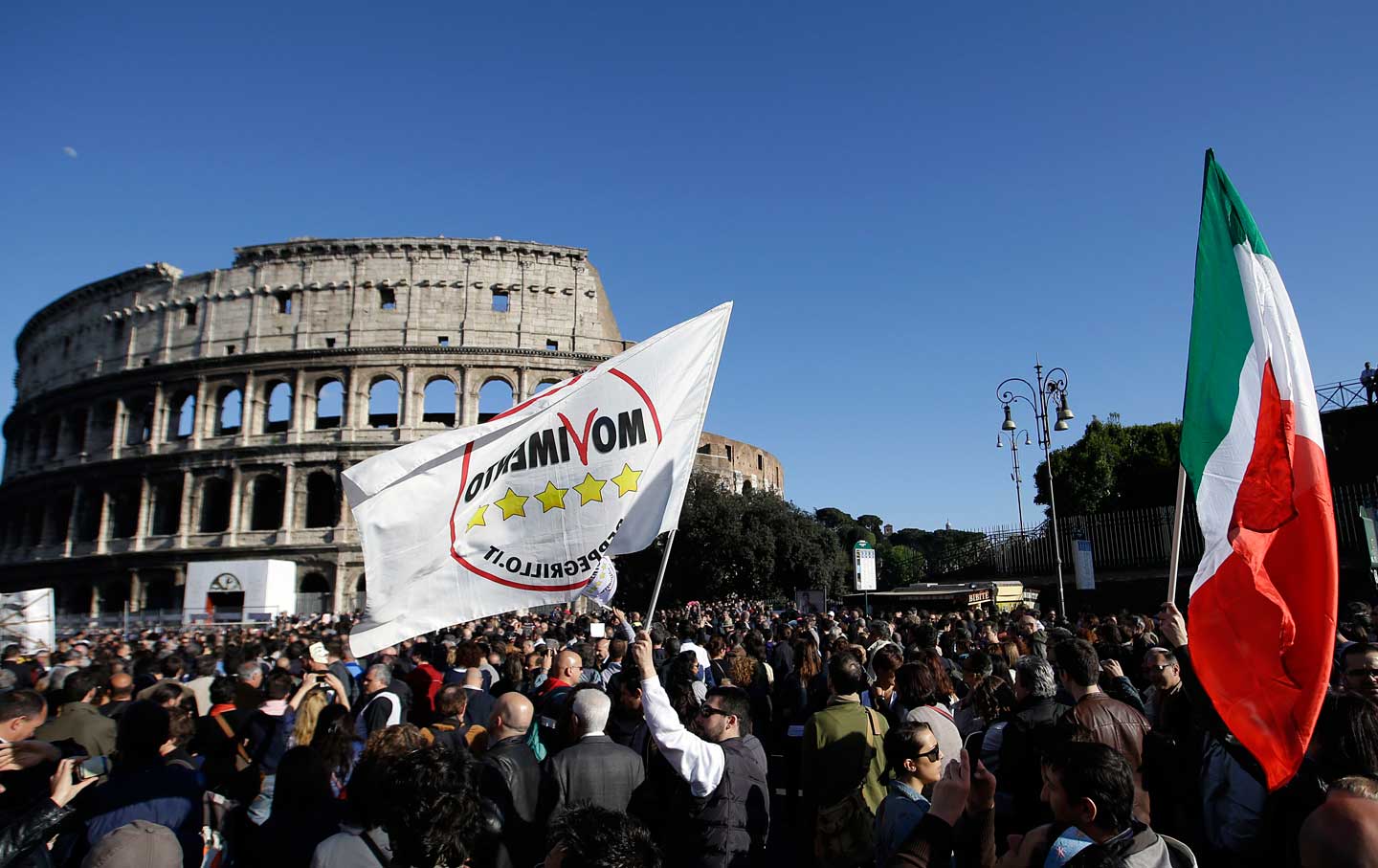 Activists of the anti-establishment 5 Star Movement gather in front of the ancient Colosseum in Rome, Sunday, April 21, 2013. (AP Photo/Gregorio Borgia)

Rome—Italians were anything but indifferent this spring when the Syriza government in Greece decided to defy the dogma of European austerity. Syriza’s natural allies here, those to the left of the Partito Democratico (PD), were exuberant: At last there was going to be a real battle against the neoliberal consensus. Even Matteo Renzi, leader of the center-left PD and prime minister since early 2014 of an awkward left-right government, was campaigning in Europe against the stark austerity policy espoused by Germany. But when Syriza’s Alexis Tsipras came to Rome in February this year after his party’s electoral victory, Renzi was friendly but cautious. “We want to give Greece a hand, which doesn’t mean we always agree with them,” he said, adding that “the rules must be respected.”

You could put that down to Renzi’s tendency to seek consensus to his right, and most Italian leftists saw it that way. But it is also true that countries like Spain, Portugal, and Italy found themselves in an uncomfortable spot when Syriza began trying to rewrite the EU rules. How could Italy—which had teetered on the brink of a similar debt crisis in 2011 when Silvio Berlusconi had to step down, and then, beginning with two unpopular governments prior to that of Renzi, imposed harsh reforms to satisfy the Eurohawks—now enthusiastically support Greek debt relief? How could the Italian government defend its essential obeisance to the EU’s rigid rules when another government was daring to flout them—and when Italian citizens had already paid the price?

This contradiction allowed some strange populist fellow travelers to leap clumsily onto the Syriza bandwagon in early July: They included Beppe Grillo and his anti-establishment, Euroskeptic Five Star Movement (M5S), but also Matteo Salvini, the gassed-up new demagogue of the xenophobic Northern League (LN), both maintaining (however untrue it was) that Greece was eager to leave the euro, and that Italy should follow suit.

Thus Grillo, whose M5S, although a mixed bag, tried to forge an alliance in Brussels with Britain’s Nigel Farage of the far-right UKIP, went to Athens to support a radical “No” vote in the July 5 Greek referendum. He was a walking contradiction, Grillo: out demonstrating in Athens as if he had something in common with veteran Syriza ally Nichi Vendola of Sinistra Ecologia Libertà (SEL) and the small group of dissidents to the left of Renzi within the PD who also traveled to Greece to show their backing for Tsipras.

This week, rumors were floating that an Italian Syriza is in the making, one that would join SEL, several small parties that still call themselves Communist, and the dissidents of the PD, a few of whom have already left the party. Yet right now it is hard to see how such a left opposition could blossom into something like that of Syriza or Podemos in Spain. The left to the left of the PD lacks charismatic leaders and especially new faces, people who in the minds of disgruntled voters are not tainted with having been part of the political establishment, la casta. A similar recent experiment, the anti-austerity Lista Tsipras for Another Europe, which was elected to the EU Parliament last year, has devolved into ugly infighting.

Despite some tiny, timid signals of recovery—rising exports, GDP growth now at 0.7 percent but possibly reaching 1.5 percent later this year, unemployment stable at 12.4 percent—the recession has left a sour, angry mood across Italy, along with inchoate fears that Italians have lost control of their destiny. On the left, those concerns are expressed as a conviction that the EU suffers from a grave “deficit of democracy” and a lack of common cause or commitment to social justice that could make membership in a monetary union politically acceptable. Progressive Italians think the Union is in thrall to a neoliberal ideology executed by the likes of Wolfgang Schäuble, German finance minister and arch defender of austerity, when it should be centralizing its finances so as to assist weaker economies. “This Man’s Scary—To Us, Too,” the weekly L’Espresso titled a recent cover over a photo of the scowling Schäuble.

On the right, the same anxiety is translated into demonization of “Brussels,” as if the relatively weak EU Parliament and its highly bureaucratic committees were the main villains in the story. And even as Italy is being assailed by Brussels, the right warns, it is being invaded by immigrants from across the Mediterranean. The Northern League has long blamed immigrants for most of Italy’s problems, and Beppe Grillo has not hesitated to chip in too. Both helped fuel the fury with which outright neo-fascists led violent protests against immigrants in Rome and Treviso last week. And as for Italians’ economic self-interest, for every person who feared a Greek exit from the euro or the Union, believing it would have dire financial consequences for Italy, there is one who’s been persuaded by Salvini or Grillo that Italy would do much better if it went back to the lira.

Why doesn’t Italy, with its strong left-wing traditions, have a Podemos like Spain does? As the novel-writing collective Wu Ming has astutely observed, where in other societies vital new movements for change emerged after 2008, Italy gave birth to Grillo. Where a Podemos should stand in Italy, they say, the ambiguous figure of Grillo occupies the territory. He’s “one of Europe’s leading populists,” according to a recent Financial Times profile. He told the FT he attributes the recession to the single European currency, which he says has been “awful.” Grillo wants Italy to hold a referendum on the euro, on the wings of the Greek referendum (which for better or worse was not a referendum on the euro). He recently told Bloomberg that “our movement has been acting as a buffer, so we have no Golden Dawns in Italy.” In other words, the far-right movement the Greek crisis and austerity policies have fostered elsewhere has been pre-empted by the M5S. But the truth is that while Italy has a flourishing extreme right (including its own tiny Golden Dawn), it is precisely the Podemos-sized hole that Grillo is filling, acting as a buffer against progressive, not far right, social protest.

Where in other societies vital new movements for change emerged after 2008, Italy gave birth to the ambiguous populist Beppe Grillo.

The M5S is a strange chimera. Many of its earliest followers were young, often somewhat progressive, and strongly disillusioned with party politics and the entire system. They were drawn by Grillo’s popular blog, on which he outlined goals that Italian political parties didn’t have much to say about, such as alternative energy, sustainable agriculture, and Internet freedom. Over time, though, Grillo has broadened his base to include struggling small businessmen and others traditionally on the right, and his platform has widened to include broadsides against immigration and the income tax. He’s proposed a guaranteed basic income for any citizen actively seeking work, but this is connected to a regressive sales tax. Despite an elaborate system of web-based democratic procedures, the party (or “movement,” as he calls it) has been run in a top-down, near-tyrannical fashion. While the leaders of Podemos say theirs is a party of neither the right nor the left, their program makes their left-wing leanings pretty clear. Grillo’s leanings are ambiguous; he’s what Italians call a qualunquista, attacking politics in all its stripes. But in practice he veers to the right.

Right now the polls put M5S slightly below the 26 percent of the vote it got in the national election of 2013. But the movement’s popularity, which slumped after enthusiasts saw that Grillo was determined never to use its parliamentary strength to ally with other parties on any legislative measures, seems to be on the upswing once again—as is that of the other Euroskeptic party, the Northern League, which according to recent polls appeals to a worrying 15 percent of Italians, in part because of the collapse of Silvio Berlusconi and his Forza Italia. Together they represent a sizable anti-Europe faction.

In a recent interview, former Greek finance minister Yanis Varoufakis described the heated meetings within the Eurogroup leading up to the Greek referendum on July 5 as “a major clash of Titans between Dr. Schäuble and Paris and Rome.” In that sense, he credited Matteo Renzi and French President François Hollande with conducting a battle against neoliberal extremism. There’s every reason to think that despite Greece’s humiliating defeat, the battle over austerity is not over yet. However, Varoufakis has said he believes that in punishing Greece, the Eurohawks wanted above all to frighten other countries—he named Italy—so that none would again dare to challenge conservative monetary policy. And as veteran journalist Ida Dominijanni wrote in the weekly Internazionale, the fact that the Greek Parliament had to vote on the deal points to the way “neoliberalism doesn’t rule with tanks, it demands that governments approve its diktats in every sense, internalize them and express them.”

In any event, a clash of Titans is not a pretty prospect for us mere mortals. It implies a nasty conflict in which there is bound to be much collateral damage on the ground. In Italy, those most likely to be blamed by the voters for the fear and uncertainty spread by that war up in the EU heavens are those in government, and not only the Partito Democratico. As for SEL and others to the left of the PD, however outspoken in condemning austerity they have been, many also risk being punished for their long membership in the political establishment. They too, will be held responsible. And Grillo—who despite his movement’s two years in Parliament has never dirtied his hands with governing—stands to profit.

And this is a pity, because in the social-media streams I see, there is a huge if scattered populace in Italy that was rooting for Greece to go to battle with European neoliberalism, and that was deeply disappointed by Tsipras’s probably inevitable retreat. It is a fractured (and highly fractious) populace, to be sure, readier to bicker among its members than join together to show its colors. But beware, Dr. Schäuble, because if those numbers ever do unite, you and your dogma will be swept away.